Checking In on the Algae of a Brooklyn Reservoir With a Microbiologist - Atlas Obscura
Want to see fewer ads? Become a Member. 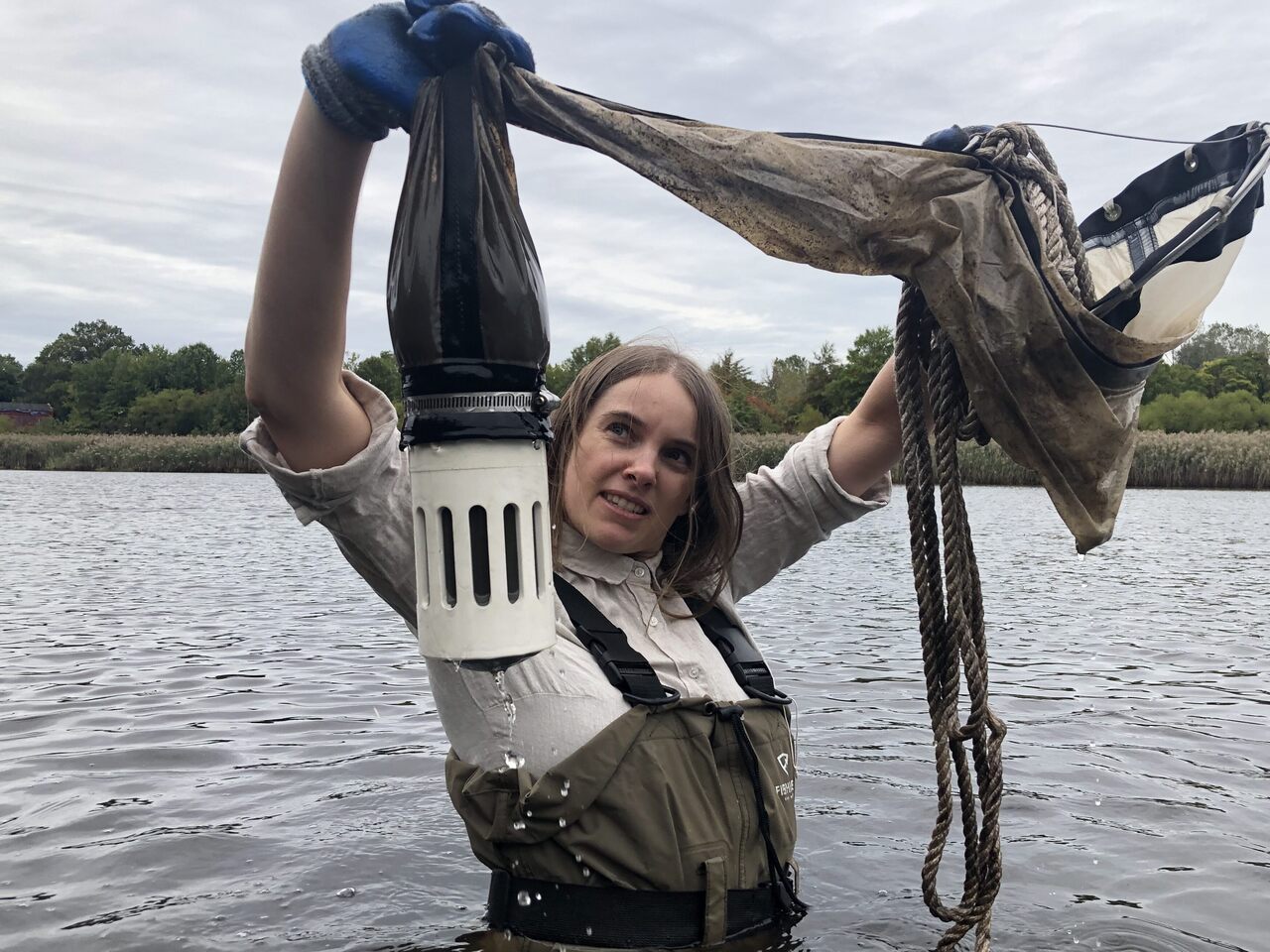 On a fall day, Sally Warring had come to one of New York’s grandest stagnant pools of water to find an old friend. She is at Ridgewood Reservoir, a 50-acre wetland somewhere on the border of Brooklyn and Queens, looking for a colony of cells named Volvox. As far as algae go, Volvox is pretty charismatic, a cluster of green gems encircled in a sphere that looks almost like a planet. And the colonies are big enough to be seen with the naked eye—a real rarity in the microbial world. Warring wants a reunion.

“This time last year I found a great algae out here, it was one of my favorite species,” she says as she walks around the large pond. “I was growing it until about a few weeks ago, when it died.” Volvox. It is one of the first microbes she ever saw, so it holds a special, hard-to-see place in her heart. As she speaks, Warring pulls on a pair of dark khaki waders, the iconic pants-cum-boots favored by many fishers. I do the same. We wear waders because, in order to find the tiny green spheres, we must meet them on their own turf. Warring, who is originally from New Zealand, is a young, charming microbial encyclopedia. She talks about microbes almost as if they were people—how they meet and how they eat and how they reproduce, just like us. While she talks, her eyes are always on the water or, more specifically, on the sludge.

Now a microbiologist at the American Museum of Natural History in New York, Warring has devoted her career to tiny, rarely seen denizens of the natural world. She’s less interested in the microbes that colonize the far reaches of the planet than she is with more cosmopolitan organisms that call urban oases home. Warring also runs the popular Instagram account @pondlife_pondlife, in which she artistically presents the life she finds in the ponds of the city—and there is more than you might think. Her process is simple: go to a pond and scoop up some water in a jar. There will always be something interesting inside.

Warring rarely has a specific agenda for these expeditions. Her work is not oriented around monitoring the health of the wetland, but rather peeking into—and getting people excited about—the vast biodiversity that teems in metropolitan puddles of various sizes. And today, she is hoping to collect new specimens of Volvox to take back and breed in her lab.

Ridgewood Reservoir was built in 1858 to quench Brooklyn’s growing thirst. It’s actually composed of three basins divided by walls, only one of which contains water today. The reservoir was designed to capture runoff from the moraine that marks the southern extent of the last Ice Age, according to Matt Malina, the executive director of the nonprofit NYC H2O, who is assisting a team of volunteers as they weed the wetland. “The reservoir’s history and ecology is unique,” he says.

The reservoir was decommissioned in 1959 and nearly drained in 1989, according to Curbed New York. In December 2018, after years of community and activist effort, the New York State Historic Review Board placed the reservoir on the state’s official list of historic places, which should protect it as a wetland for the foreseeable future. Today, the reservoir looks entirely natural: a pond fringed with native sweetgum and honey locust trees. It’s the perfect place for wildlife: big (double-crested cormorants), small (swamp sparrows), and very small (microbes).

To descend into the middle basin of the reservoir, we have to climb over an iron fence and rappel down 30 feet, using a rope slick with pond scum. “This is the original wall of the reservoir,” Malina says once we’ve made it safely down. “We’re going out to fish for microbes,” Warring announces, brandishing the glass jar.

As Warring and I wade into the reservoir, the pressure of the water squeezes in on the waders like a vacuum bag. We are not wet, she reminds me, even though it desperately feels like I am. On this day, the pond is actually far from idyllic; a discordant orchestra of electric-powered aquatic mowers is being used to hack down a thick fringe of yellow reeds encircling the reservoir.

The reeds are phragmites, Warring says, a trenchant, non-native wetland grass that’s suffocating the reservoir’s native plants. NYC H2O is on a mission to eradicate the phragmites, one that could take a decade. We wade through a 20-foot channel sawed through the reeds. “Be careful,” Warring says. “That’s the only advice I have!” She steps as confidently as one can through water that is rapidly approaching the tops of our waders.

Beyond the yellow curtain of phragmites, the reservoir looks like an almost offensively bucolic oasis in a concrete city. The distant sliver of forest across the reservoir is splashed with fall’s yellows and reds. The water is not clear, but an orange-brown that Warring ascribes to the clay dredged up from the bottom. “This is definitely a lot deeper than it was the last time I was here!” she says “Last time I had no fear getting water in my waders, but this time I’m a little worried.”

Though most microbes are impossible to spot on their own, they often accumulate together enough—as scum, sludge, or general murk—to be visible to the naked eye. “All the stuff growing on here,” Warring says, as she lifts a floating stick covered in brown sludge, “that’s all microbes.”

We’ve settled into a spot where the water laps at our chests, and Warring pulls out a plankton net that resembles a long sleeve of ultrafine mesh and drags it across the top of the water. “More microbes, less water, basically,” she says, explaining the device. The sieve has a pore size of just 50 microns, approximately the width of some strands of human hair. “It’s actually a little bigger than I would like,” Warring says. “I’m buying a new one soon.” Volvox hangs out on the surface of the water, so Warring is hoping it will turn up. She dunks the glass jar (which formerly housed peanut butter) into the pond, shakes it, and holds it up to the light.

Volvox is a common denizen of New York wetlands. The colonial species was first observed in 1700 by early Dutch microbiologist Antonie van Leeuwenhoek. He published the observation in a letter, “concerning the Worms in Sheeps Livers, Gnats, and Animalcula in the Excrements of Frogs,” according to botanist Ernst Pringsheim Jr. in a 1970 paper in Soil Ecology Letters. In 1758, Charles Linnaeus broke out the genus Volvox with two species: V. globator and V. chaos, the latter of which has now been recategorized as an amoeba called Chaos. The algal colonies can pop up in any number of moist spots, including bogs, brooks, ditches, forest pools, and basins. Large blooms of Volvox indicate nitrogen-heavy water and can be harmful to larger aquatic life.

Back on land, Warring sheds her waders pulls out a portable microscope that she connects to her phone. She extracts a little water from the jar with a dropper and sploots it on a slide, which she positions in front of the camera. Immediately, on the screen, there’s life. “That’s a rotifer there, that’s actually a tiny animal,” Warring explains as she follows the creature, which resembles an eensy horseshoe crab, as it wriggles across the slide. She swivels the microscope to take in a larger view of the slide. “That’s a big ciliate,” she says, almost yelping. “Nice!”

“Oh that’s nice,” she says, zooming in on what sort of resembles a hairy turd. It is a ciliate called Frontonia, and within its membrane are green shapes—algae, living symbiotically inside the microscopic animal. “This is a beauty,” Warring says, almost tenderly. “It’s got a mouth and anus somewhere, but I’m not sure which is which.”

We see several other rotund diatoms, rod-like bacteria, and an outsized blob, which Warring assures me is likely insect larvae, looking almost monstrous alongside the tidy, tumbling, symmetrical microbes. But no Volvox. Warring sets the microscope aside and peers into the orange-ish liquid in the jar. From what I can see, there are twigs, large pieces of green sludge, some long translucent critters that look almost like fish, and a piece of red ribbon. “Bloodworm,” Warring says. I tell her I feed freeze-dried versions of that to my fish sometimes. “You can take it with you, if you’d like!” she says, almost serious.

A few yards away, a group of students from Christ the King High School test for environmental DNA, or genetic fragments that might indicate whether certain animals have been in or passed through the reservoir recently. They don’t find much—the pond has been empty of fish for years now, but they seem to enjoy the field trip, organized by NYC H2O in the hope of reuniting the city’s land-dwellers with this mostly forgotten wetland in their midst.

Having given up on finding Volvox for the day, Warring stows her microscope in her backpack, which has somehow managed to stay bright white despite all the pond scum. As Malina thanks all the visitors and volunteers, Warring shows me her former Volvox colonies on her phone, the way one might flash a video of her dog or kids. The globes orbit like reckless planets, some fast and some slow, tumbling in and out of the frame.

No matter where you are in the world, you are surrounded by an invisible menagerie of microbial life, hunting and eating and reproducing and whirling around right in front of your eyes. In a way, @pondlife_pondlife is a nature-in-miniature documentary that rivals Planet Earth. Warring says that the darker green gems inside each Volvox represent the next generation. Once these young colonies are fully formed, each globe will burst like a bubble, releasing the small green spheres to make their own way in the city.

If You Look Very, Very Close, Antarctica Is Teeming With Life

New research in Brazil highlights how distinctive the "living skin" of the planet can be.
bathrooms

Join us for a daily celebration of the world’s most wondrous, unexpected, even strange places.
sewers

Brooklyn's Putrid, Beloved Gowanus Canal Has Been a Horror for Centuries

1:18
Want to see fewer ads? Become a Member.
From Around the Web
Atlas Obscura Trips
Only in Queens: Tasting Our Way Through New York’s Most Diverse Borough
View This Trip
Thanks for sharing!