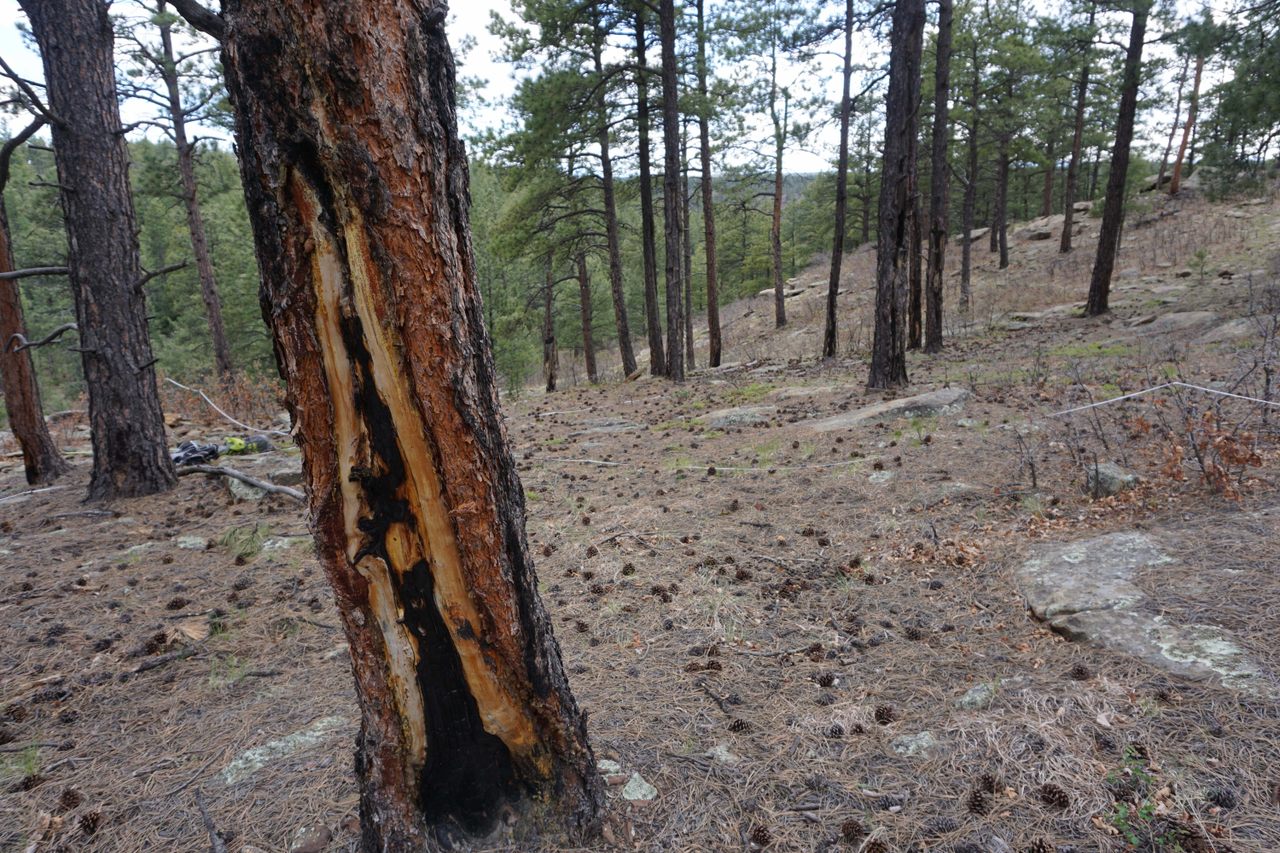 Pine cones lie strewn on the floor of a ponderosa pine forest in New Mexico, nearly three decades after fire moved through the area and scarred the tree in the foreground. Courtesy Kyle Rodman
In This Story
Destination Guide

The majestic forests of the American West tower with iconic trees that hold decades, even centuries, of history in their heights and rings. But young, fledgling trees also tell significant stories about climate and the potential for forests to bounce back following wildfires, such as the ones that have afflicted the West with increasing intensity over the last several years. Now, that potential for renewal may be imperiled amid a warming climate and more frequent droughts and calamitous blazes.

“Small trees tend to be more sensitive to climate than mature trees with deep roots that can better weather a drought,” says Kyle Rodman, a forest ecologist who has been studying how seedlings fare in the wake of fires, as a way to gauge forest resilience. “It’s important to understand the small trees in drier, hotter conditions—they’re the sentinels of change.”

For a recent study published in Global Ecology and Biogeography, Rodman and colleagues from the U.S. Forest Service and universities in Colorado, Arizona, and North Carolina focused on the viability of post-fire seedlings for two common trees in the Rocky Mountains—ponderosa pine and Douglas fir—under different climate scenarios. Under normal circumstances, wildfires are a part of the natural ecology of these forests, which hold the ability to regenerate through new seedlings. But circumstances today are hardly normal. The study concluded that if conditions in the area become warmer and more arid, as many models predict, forest resiliency will decline because of significant reductions in the density of post-fire seedlings.

About 50 percent of the terrain studied, ranging from southern Wyoming and Colorado to northern New Mexico, is currently suited to post-fire forest recovery, says Rodman, a postdoc at the University of Wisconsin–Madison who coauthored the study while at the University of Colorado Boulder. But with moderate growth in carbon dioxide emissions through 2040, that figure falls to around 20 percent, the study estimates. And if emissions were to rise rapidly through the end of the century, it plummets to just 3 to 6 percent.

That’s also assuming that seeds for new trees can reach affected areas in the first place. The dispersal of seeds occurs naturally through wind, water, or traveling birds and small mammals. However, if there are few or no surviving trees following a fire, it will take an even longer time for seeds to find their way into a burned area, says Rodman, who calls it a “long-distance relay.”

Once on the ground, seeds are vulnerable to temperature and moisture. If conditions have become much hotter and drier, they may not stand a chance. “Instead of a long-distance relay, it becomes no race,” Rodman says. Topography can also influence survival prospects, he adds. Valley bottoms tend to be wetter and cooler, and north-facing mountain slopes receive less sun than south-facing ones.

The findings add to mounting evidence of the grave toll of climate change on Earth’s forests. Severe fires—especially ones followed by warm, dry spells—can slash the number of mature trees able to produce seeds, or moderate temperatures and wind in their vicinity, to the benefit of young trees, says Rodman.

If forests aren’t able to recover and regenerate, the fires could end up completely reshaping a landscape, with burned terrain emerging as long-term or permanent grassland or shrubland, or even a different type of forest altogether. “There are places that burned in the past 20 to 30 years, and they’re going to look different for a long time,” Rodman says. “They were contiguous conifer forests for decades and now they’re chest-high scrubs. That’s the kind of reorganization I’m talking about—a shift to a completely different ecosystem. If not different, it will certainly take a long time to get to where it was.”

The implications are tremendous. “Forests cover about 30 percent of the land area in the world, but they’re habitat for over 80 percent of land species,” he says. “The past 20 years have been a big wake-up call both in terms of what fires are doing now and how hard they are to control and what’s going to happen afterward. What we’re most concerned about is things can still get worse.”

Long after the forest stops burning, the effects of this year's fires will linger in the soil and water.
forests

With a little help from scientists, an oak in the Harvard Forest is sharing updates about its life.
Video