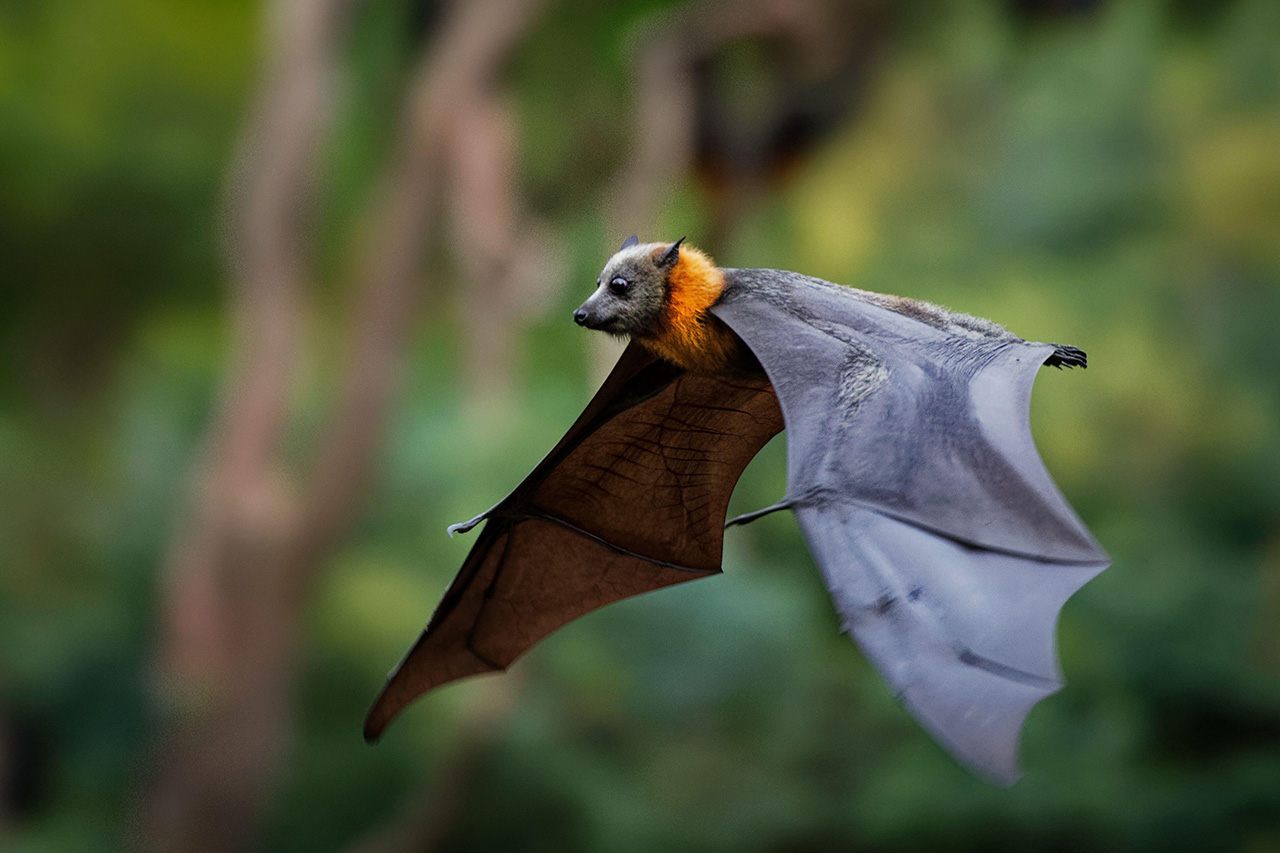 The grey-headed flying fox is a fruit bat native to southeastern Australia. phototrip / Alamy
In This Story
Destination Guide

The bat swivels around to regard us, eyes wide and confused, wings folded protectively across its salt-and-pepper body. One of its wings is mangled—the result of getting entangled in fruit netting. “Bat wing membranes are like skin, it will heal and grow back,” says Jan Virgo, animal rights activist and founder of the non-profit Colac Otway Bat Shelter. But Dixie, as Virgo has named her, has another problem. She’s lactating and her baby is missing.

This is the regular plight of the grey-headed flying fox, a species of megabat, or fruit bat, endemic to southeastern Australia. Flying foxes once dominated the skies here. Millions blotted out the stars as they soared from the boughs of the giant eucalypts, beeches, and blackwood trees that once towered across the region. But deforestation, climate change, food scarcity, and the increasing frequency of bushfires has reduced flying fox populations so severely that today they are listed as vulnerable by the International Union for Conservation of Nature. In 2019, Australia’s National Flying-fox Monitoring Program estimated that there were about 589,000 left in the wild. As urban sprawl replaces their natural habitat, flying foxes have been forced to establish colonies in city parks and forage for food in suburban backyards.

The state of Victoria is home to 11 known colonies, whose numbers fluctuate with the seasons, some reaching upwards of 50,000 bats. Several are located in urban green spaces and have, for the most part, been embraced by their hosts: The curator of the Warrnambool Botanic Gardens worked alongside Andy Meddick, a member of both the Animal Justice Party and the Victorian Legislative Council, to secure funding for a new irrigation system to reduce heat-stress deaths in its colony. Melbourne has built tourism around the colony in Yarra Bend Park. The Geelong City Council created educational programs to teach children about the bats roosting in Eastern Park. The Greater Bendigo City Council appealed to the public for help after Rosalind Park’s colony shrank from 20,000 to just 1,300 bats between October 2019 and January 2020. But then there’s Colac. Colac is the only town that just doesn’t seem to want them around.

Colac’s head gardener, Laurence Towers, told the Colac Herald in a December 2016 cover story about the bats, “I have noticed the mower disturbs them during the day so I hope they decide they’re not getting any sleep and move on.”

The Colac Botanic Gardens, established in 1865, is one of the largest botanical gardens in regional Victoria, proudly boasting seven native and exotic trees listed on the National Trust of Victoria’s Significant Trees Register. These trees, the Council claimed, would suffer irreparable harm if the bats were not removed. It is true that trees used as roosting sites by bats suffer stress and loss of leaf canopy—damage known as dieback and defoliation. In 2009, the Australian Research Centre for Urban Ecology found that in the Yarra Bend colony’s first five years, trees used for permanent roosting lost half of their leaves, while seasonal roosting sites experienced significantly less damage and were able to regenerate more quickly. Surprisingly, the percentage of defoliation seemed to decrease over time, with several trees experiencing epicormic growth—a phenomenon wherein extreme stress causes dormant buds to bloom—and fully recovering. Theoretically, the conditions of Colac’s small, seasonal colony would have minimal impact on the town’s botanic gardens. It didn’t matter. The bats had to go.

Flying foxes are often dismissed as pests, blamed for sullying green spaces used by humans with loud screeching, feces, and foul odor. In reality, they’re a keystone species, able to travel farther than any other pollinator, and therefore crucial for spreading seeds and keeping native plants genetically sustainable.

“They’re the night farmers,” says Virgo. “They can do the jobs that bees can’t do, and birds can’t do.” They are also surprisingly clean animals, who seldom eat where they sleep.

Although flying foxes are federally protected, only colonies that have been permanently established in one area for 10 or more years and contain 10,000 or more bats are considered nationally important and receive the full benefit of protection from culling, hunting, and relocation. But colonies of this size and permanence have become a rarity. As a result, the listed trees in the Colac Botanic Gardens, protected under the Heritage Act 1995, have taken precedence over the bats.

Operating without a permit, and openly encouraging the public to aid their efforts, the Friends of the Colac Botanic Gardens used dog whistles, sensor lights, and noisemakers to try and scare the bats away. Nothing worked. Flying foxes can’t hear dog whistles (only microbats can), and the sensor lights had little effect on the nocturnal creatures. By summer’s end, the colony, which at that time was only 200 strong, had moved on of its own accord. When the colony returned the following summer, however, there were thousands.

“The bats are a good example of a ‘community conundrum,’” says former councilor Chris Smith, who also served as the Council’s representative on the Friends of the Colac Botanic Gardens for a number of years. “It is getting to the point of killing the host trees. If we take a longer-term view and these wonderful trees are destroyed, the bats will need to move on regardless.”

After an independent arborist gave three of the gardens’ heritage-listed trees a maximum of three years to live, the colony’s fate was sealed. Light towers were installed in the gardens, 44-gallon smoke drums were put in place, and noise pollution and water spouts were implemented. Yet the colony only grew in size, peaking at 6,500 in 2019. Bat conservation organizations and animal rights activists, including Virgo and Meddick, and an outpouring of concerned citizens, lobbied the Council to allow the bats to remain.

“[I]ndigenous species have a right to exist among us,” Meddick wrote in a public letter to the Council. “We have a historical and ethical responsibility to do our utmost to accommodate or help them.”

The community was divided. Many were supportive of the Council.

“The Botanical Gardens are a sanctuary for humans … there are plenty more trees elsewhere [Otway National Park] where these bats can do their job for nature,” wrote one local, Jeff Cole, on the comment boards for the Colac Herald’s coverage of the dispersals.

Others were more forgiving, though they still thought the bats should go. “The Shire should implement long-term tree planting and potential roosting site development well before even talking about relocating the bats … ” wrote another resident, Isabelle Higgins.

The Council estimates that it has spent $190,000 over two years on dispersal attempts, an amount many believe has been a colossal waste of money. “It’s not the same bats that they’re always dispersing,” Virgo says. “It’s different bats all the time. There is a 20 percent turnover every night.”

In August 2020, the Colac Otway Shire Council was granted an open-ended permit until 2023 allowing for dispersals between April and August, outside of the flying foxes’ birthing season.

“[The bats’] welfare will be a priority as we encourage them to move on or fly past our gardens and find a more suitable treed space to roost for their breeding season,” said the Council’s Infrastructure & Leisure Services General Manager, Tony McGann, in response to the permit grant.

It has been several weeks since Dixie’s rescue. Her wing is healing, and although minor bone damage has slowed her recovery, she will be released soon. Unfortunately, her baby was never found.

The Council may have obtained its permit, but Colac’s bat conservationists did win a small victory. Last January, Virgo rescued a days-old flying fox pup that had fallen from its mother, which forced the Council to postpone its last scheduled dispersal for six months to allow the babies to mature. At present, no further dispersals are planned, and Virgo hopes the Council may still come around to the idea of allowing the bats to remain.

“There have only been a handful of rescues in the Colac Otway area,” Virgo points out, also noting that Colac is the only place in Victoria that has had no bat fatalities from heat-stress events. As the southeast continues to simultaneously heal from the ravages of the 2019–2020 summer bushfires and brace itself for future destructive weather events, ousting the bats from Colac seems especially cruel. Virgo says, “Colac is the safest place for bats.”

Missing for two years, an elderly greater mouse-eared bat has been the island's only known member of the species for decades.
libraries

A wildlife ecologist specializing in large carnivores unfolds a mystery for listeners.
List