The Passionate Photo Colorizers Who Are Humanizing the Past - Atlas Obscura
Want to see fewer ads? Become a Member. 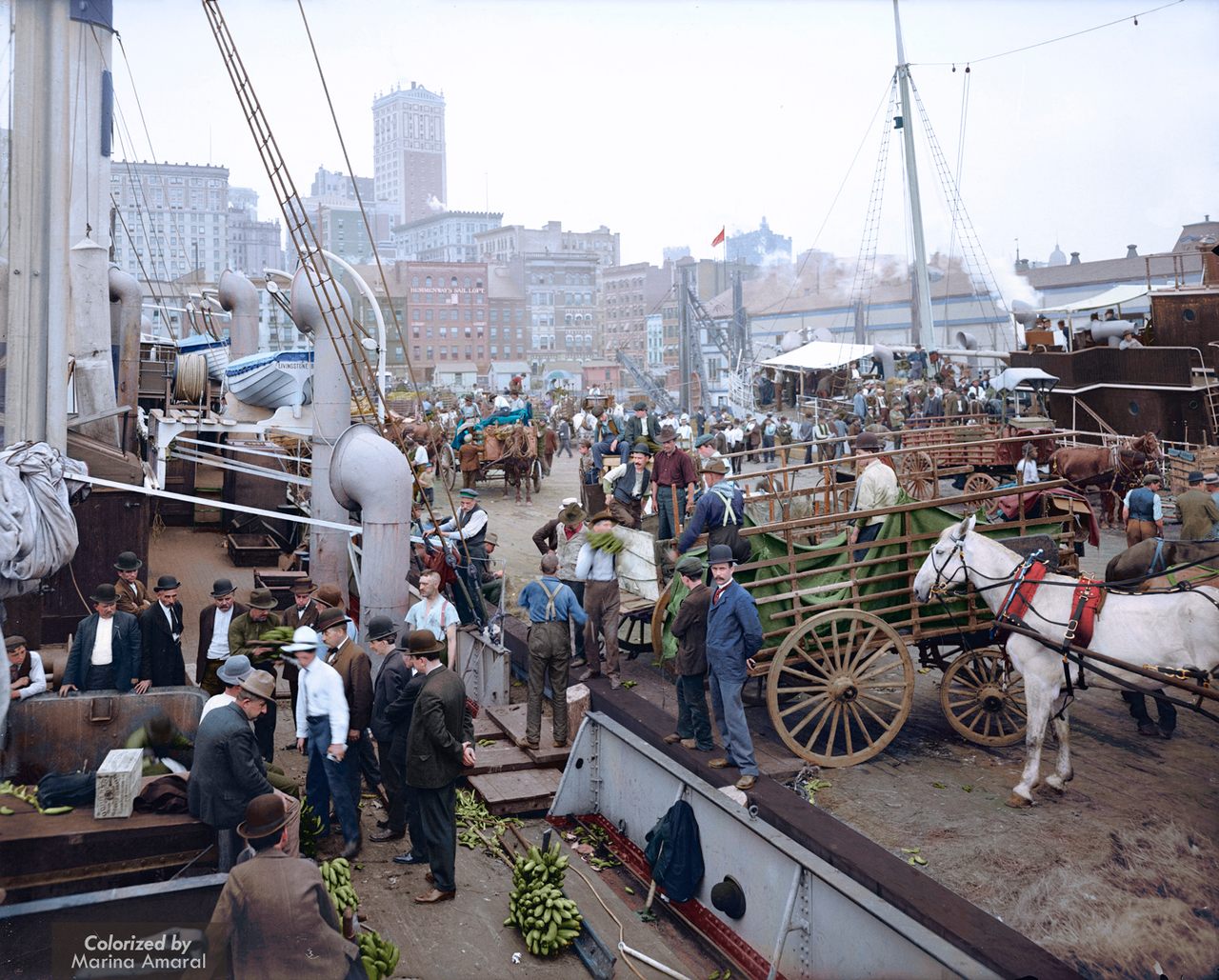 Last week, a striking image circulated online: a grainy triptych of registration photos of a 14-year-old Auschwitz prisoner named Czesława Kwoka. Auschwitz’s prisoner photos were all shot in black-and-white, but this one is rendered in soft color that makes each detail — from the red triangle on her uniform to the crimson dried blood on her lower lip — that much more jarringly lifelike. Marina Amaral, the 23-year-old Brazilian artist who meticulously colorized the image nearly three-quarters of a century after the photograph was first taken, released the colorized version on her blog in 2016 for Holocaust Remembrance Day. “I wanted to give Czeslawa the opportunity to tell her story, which is the story of so many other victims,” Amaral says. “I wanted to emphasize that they were not numbers or statistics, they were real human beings.”

Adding color to historical black-and-white images isn’t a new phenomenon, but in recent years, a community of artists has emerged online as interest in their work has surged. In 2012, Danish artist Mads Madsen shared a portrait of a military general named Gershom Mott in full color, from the gleaming brass buttons on Mott’s uniform to the salt-and-pepper tones in his beard. The photograph looked as though it could’ve been a modern-day reproduction—yet the original was shot in 1864 during Mott’s service in the American Civil War, decades before the advent of color photography and more than a century before it became commonplace. As the photo made its rounds on Reddit, over a thousand commenters chimed in, many noting not only the image’s realism, but also the way it just seemed uncannily lifelike compared to static, black-and-white archival images from the era. “I love how colorized photos enable me to imagine these guys walking around today,” one commenter remarked. “I feel like I saw this guy at the store,” wrote another.

Madsen spent hours reconstructing the pigments in Mott’s portrait, from researching the exact color of the general’s ribbons and medals to meticulously building up his skin tone, layer by layer, in Photoshop. He was 17 years old at the time and self-taught with no artistic background. “I couldn’t draw a stick figure,” he now jokes. The Mott portrait was the first of Madsen’s work to go viral; the ensuing attention inspired him to found the Colorized History subreddit, a community where a select group of artists like Madsen and Amaral now regularly share high-quality colorizations of historical images, the very next day.

Five years later, Colorized History has more than 300,000 subscribers and has become one of the fastest-growing communities on Reddit. The images span eras, content, and tone: from somber military scenes, like Robert F. Sargent’s ominous 1944 shot of the Normandy Landings (“Into the Jaws of Death”), to portraits of historical figures—Picasso, Charlie Chaplin, Rosa Parks, Sugar Ray Robinson—all painstakingly, vividly brought back to life. The comments on most of the subreddit’s posts echo a shared wonder at the eery, uncanny valley-like effect of seeing a frozen-in-time image made so much more relatable. Of a colorized portrait of Abraham Lincoln, one user observed: “I feel like I’m looking at the man, and not the legend.”

Why do these reproductions resonate so deeply with so many people? Color images have a greater impact on our visual memory, and allow details we might otherwise gloss over to leap off the page. Take Amaral’s colorization of “Migrant Mother,” the iconic Dust Bowl image shot by Dorothea Lange at a California migrant camp in 1936. The image, already stunning in black-and-white, looks strikingly, startlingly familiar in color. Every detail, from Florence Thompson’s sun-burnished skin to the frayed fabric on her tattered sleeve to the scuffs of dirt on her son’s cheek, seems to take on new dimension and feel more alive. The hardship embodied feels timeless, more viscerally human. Similarly, in the photographs of Czesława Kwoka, an already-haunting image takes on new dimension. “We can better understand what she and millions of others went through once we see the bruises, the cut on her lip and the red blood on her face,” Amaral says. “I hope people look at Czeslawa and understand that she was a 14-year-old girl who was tagged as a political prisoner and was murdered for absolutely no comprehensible reason. And she was only one among millions of others.”

Technology and the accessibility of software like Photoshop has allowed colorizing to become not just an artistic hobby, but for artists like Madsen and Amaral, a career. Amaral first began to experiment with colorizing in 2015 on a cache of black-and-white World War II photos she found online. The artist is now collaborating on a book, The Colour of Time, with historian and author Dan Jones. She restored over 200 historical photos for the project, many of which have never been seen in color before. “I never imagined or planned that this would become my profession and that I would built an entire career out this,” she says.

The amount of time an artist pours into a single image can vary wildly—“days, weeks, or hours,” says Madsen. He spent roughly six hours on a portrait of Winston Churchill, while more complex compositions, like a scene of Hitler in the Reichstag, can eat up as much as 50 hours in total. “There’s about a hundred people in that, all in different uniforms, plus Hitler himself,” he explains. “Everything had to be colored, from the buttons and ribbons on the uniforms to the tables in front of them.” Amaral recalls spending the better part of a month on this early 20th-century photo of New York’s banana docks, agonizing over each hat, each face, each strip of fabric in the composition. (A 2017 Vox documentary details how that process actually unfolds on the screen.)

Before the artists even launch Photoshop, of course, there’s the research. Madsen says he and his fellow historic colorizers take great measures to ensure their work is as historically accurate as possible; on past projects, he’s referenced everything from historical records to eyewitness accounts to military-issued uniform manuals. Amaral says she is constantly reaching out to historians for their input on everything from uniforms in the foreground to signage in the background in order to prevent mistakes and anachronisms. “The research is the most important part, because we are dealing with historical documents, and we need to respect that,” she says.

While they all share a fundamental interest in history, each colorist has found themselves gravitating to different eras and styles of photography. Madsen is partial to portraits in general, and has worked on a number of images from the Civil War, but recently began exploring the American Revolution. Amaral says her preferences shift, but has lately found herself favoring historic portrayals of everyday life: “regular people carrying on with their daily duties who had no idea they would be seen decades after through a computer screen,” she says.

Amaral regularly receives messages from strangers thanking her for helping them gain a better understanding of historical images after seeing her work. “I’d say that’s the best compliment I can receive,” she says. Madsen, too, has heard from people who “are not really history fanatics, but have started enjoying history on a deeper level once they’ve seen colorization and how it affects the human mind,” he says. That’s not to say there isn’t backlash: Madsen says the artists are occasionally accused of “defiling” history, though he and his fellow artists see their work as more of a complement than a replacement. (For what it’s worth, color photography elicited its own fair share of raised eyebrows back in the day.)

While purists may take umbrage at the idea of reworking history, there’s no question that these images have a powerful effect. Madsen describes black-and-white images as “sort of alien” in how they feel like relics from a bygone era. In grayscale, a historical photograph can feel trapped under museum glass. When color is added, Madsen says, everything changes. Wars waged, leaders assassinated, a nation’s greatest moments of pride and disgrace — color doesn’t just make these images attractive or more palatable. It throws its subjects’ humanity into high relief and forces us to see historical events as things that happened in real life to real people, not events that unfolded in the chapters of a history textbook. “Suddenly, it’s right there in front of you,” Madsen says. “You can almost feel it.”

These 72 images are a rare glimpse of an ancient city lost to time and conflict.
culture

“I see the collection as a tool for uncovering what is already there."
culture

A photographer captures perseverance and pride over a decade of the Bill Pickett Invitational Rodeo.
Video • AO Docs