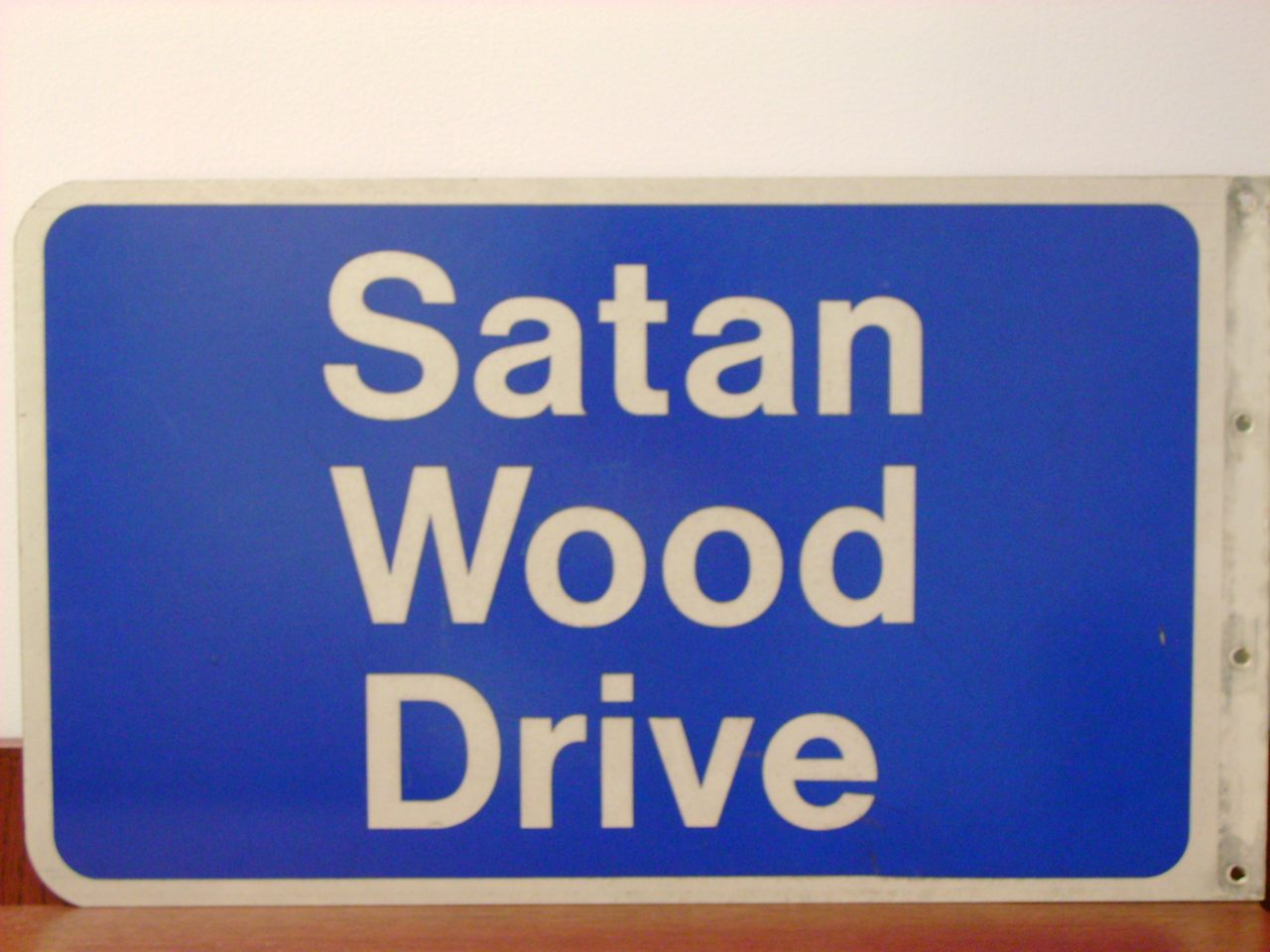 The street names in Columbia, Maryland, were drawn from art and literature. "Satan Wood Drive," however, was the result of a typo. It was supposed to be named "satin wood" for a line from an Amy Lowell poem. Courtesy of Columbia MD Archives
In This Story
Destination Guide

“Take Rustling Leaf to Brush Run, then it’s a right onto Perfect Hour.”

Anyone asking for directions through Columbia, Maryland’s residential neighborhoods could be forgiven for thinking a helpful local was pulling their leg. But this suburb between Baltimore and Washington, home to just over 105,000 people, really does have some of the wildest place names in America. Here, otherwise typical split levels and townhouses line Empty Song Road and Crazy Quilt Court, in neighborhoods with names like “King’s Contrivance” and “Hobbit’s Glen.”

“People are always really interested to know where the street names come from,” says Erin Berry, archivist and manager of the Columbia Archives, which provides an online, searchable database for local residents (and curious non-locals) to look up the origins of the community’s place names. “It’s part of a fun story for people—like, ‘We have unique names you don’t have elsewhere,’” she says.

A collection of place names that includes Fairest Dream Lane and Vast Ocean Pass (which is perhaps a little grandiose for a cul-de-sac) may sound whimsical, but the pattern is actually quite deliberate. Columbia was dreamed up in the early 1960s by James W. Rouse, a developer of shopping malls and suburbs who had big ideas about community planning and its importance for quality of life. Chagrined at the heedless sprawl that characterized much of post-World War II suburbia, Rouse aimed to build a model city that—in the words of a newsletter trumpeting the project—“would provide the broadest freedom of opportunity and variety of environment and facilities for its people.” Its layout, over roughly 15,000 acres of what had been woods and farmland, was informed not only by architects and engineers but also educators, sociologists and experts in transportation, recreation, and religion. It would be divided into ten discrete “villages,” each with a variety of housing types and easy access to shops, schools, interfaith worship facilities and open space. The community, which opened in 1967, was also explicitly and deliberately integrated, putting it ahead of its time (it was not until 1968 that the Fair Housing Act made housing discrimination illegal).

The plans for Columbia, wrote Washington Post architecture critic Wolf Von Eckardt in 1966, “show a real American city—with all the evident bugs of existing cities taken out… The art of urban design is in the details.”

Among the details that would make Columbia, Columbia was naming its vast network of winding streets—more than 1,000 in all. With so many new addresses, the U.S. Postal Service had expressed concern that there might be confusing duplicates. The Rouse Company also wanted to reflect its high-minded ideals—Elm Street and Main Street were definitely out. They settled on a scheme where place names would come from art and literature, and four employees were tasked with poring over books for suitable monikers.

“I just got his Leaves of Grass and just started reading and picking names that I thought would be appropriate,” Miller told the Baltimore Sun in 2003.

Over the decades since, locals have come to love their street names, even if they often get a chuckle or a raised eyebrow from outsiders (although a few, including Satan Wood Drive—an unfortunate typo—and Coon Hunt Court, which had troubling racial overtones, were renamed after lobbying by residents). A guide to the street names published in 2008 is among the most popular items in the Columbia Archives’ small book shop, Berry says, and residents often use the online archives to find citations for their own street names—particularly unusual ones like Sharp Antler (that one’s from Vachel Lindsay’s 1925 poem “Roosevelt”).

“I do think it’s part of the community’s identity,” Berry says.

It’s an identity that has held fast for more than 50 years, even as sprawl enveloped Columbia’s boundaries, and as the 20th-century suburban ideal itself seems less and less fashionable. But Columbia is changing with the times. A new 30-year “Downtown Columbia Plan,” adopted by Howard County in 2010, calls for redevelopment that will include a walkable urban center with more of a city feel.

“We are living in a different century,” Phillips Engelke, chair of the Howard County Design Advisory Panel and a Columbia resident himself, said on a local radio show shortly after the plan was adopted. “What I see in my young neighbors is quite different than what happened when we moved there, husband and wife, wife didn’t work, two young kids, very different world.”

But while Columbia may be moving into the 21st century, it’s keeping its quirky place names. So far, several new routes were named in honor of bands that have played at Merriweather Post Pavilion, the community’s storied music venue. There’s Dove Sail Lane, named for a phrase in Bob Dylan’s “Blowin’ in the Wind,” and Divided Sky Lane, taken from a Phish song—signs that Columbia is sticking with its lyrical tradition.

“I think people would be kind of upset if they didn’t!” Berry says.

The preservation of a heritage trail, where the author and anthropologist spent the last years of her life, takes a whole community.
collections

It all goes back to a rather literal reading of some rather vague instructions in the Constitution.
Video • AO Docs