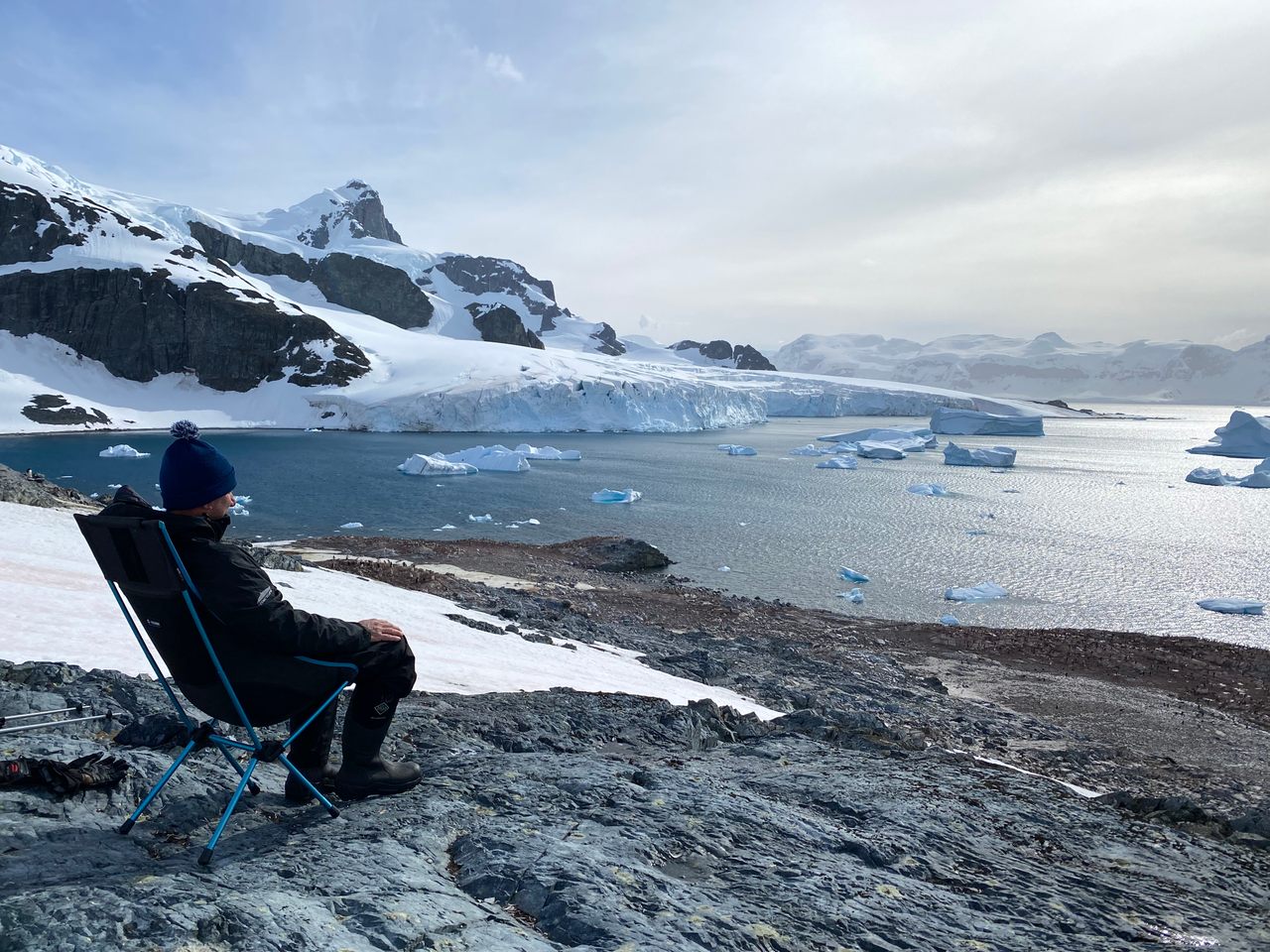 Robert "Robby" Silk—the first and, for now, only competitive chair-sitter—tests his stamina on Antarctica's Cuverville Island. Laura Kiniry
In This Story
Destination Guide

Life on Antarctica’s Cuverville Island can be harsh. Colonies of orange-billed gentoo penguins scale its often windy, snow-covered slopes, building nests for their young with small stones and pebbles they gather from the island’s rocky outcrops. Patches of moss and lichen grow sparingly, some of the few signs of flora on an otherwise barren land. But on one day in February, an unusually out-of-place sight appeared: a man sitting in a chair.

“I’d never come across someone wanting to bring a camping chair ashore in Antarctica before,” says Jonathan Fuhrmann, a Scenic Eclipse cruise ship glaciologist whose role that day was to help passengers get to and from the island’s viewpoint. “At first it seemed so bizarre, but he’d brought it with him for the biosecurity check”—a process that assures whatever you’re bringing ashore won’t introduce foreign organisms or diseases—“so I thought, ‘why not?’” Perched in a lightweight and foldable Helinox chair on a spot that Fuhrmann had assured him wasn’t interfering with the views of other guests, the man stared out over Antarctic waters. “He even proceeded to read a book for a while,” says Fuhrmann, “which looked thoroughly enjoyable.”

Robert “Robby” Silk, 49, was participating in the sport of competitive chair-sitting, a still-evolving endurance activity Silk has pioneered that involves sitting in extreme environments, from sun-up to sundown without any sort of time pieces or electronic devices. “The idea,” says Silk, “is to really just be, and not do much of anything.” On June 21, 2020, Silk completed his longest sit to date: a 14-hour, 27-minute stretch in California’s Joshua Tree National Park. Before Antarctica, this budding trend-setter had only sat himself in desert settings, including Sedona, Arizona, and the state’s McDowell Mountain Regional Park in North Scottsdale. (The Antarctic continent is the largest desert on earth, but many of its surrounding islands are considered tundra.)

While Silk’s endeavor is unusual, unexpected endurance sports have been around for decades. Take the Dutch sport of paalzitten, or pole sitting, in which participants sit atop wooden poles for hours, each one attempting to outlast the other. It was supposedly invented to help stave off boredom during long winter months. Or danceathons, prolonged dance sessions that can last from hours to weeks, with cash prizes awarded to the last team standing.

But despite the obvious notoriety that competitive chair-sitting brings (“It would be amusing to be in the Guinness Book,” says Silk, “but I hadn’t really thought about it.”), Silk says he does it for many of the same reasons that people run marathons: to take a break from daily trivialities and routines and simply test himself. There’s even training involved, since anyone who’s ever flown thousands of miles in an airplane knows that sitting for long periods can wreak havoc on everything from mental stability to physical dexterity. “I don’t do calisthenics beforehand for nothing,” he says.

Although the “competition” part is a bit tongue-in-cheek—Silk is, to date, the only competitor—the sport’s overall objective is to complete the most difficult sit possible. For deserts, this generally means a factor of high temperature, total degrees of heat (meaning the day’s average temperature), and length of day. A tricky equation, since the further north you go during the summer solstice the more daylight you’ll get, but overall temperatures tend to decrease. In a place like Antarctica, where the focus is more on “extreme” sitting, Silk jokingly says that icicles forming on the tips of your chair can be good. But frostbite? Not so much. “It’s meant to be uncomfortable,” he says, “but not deadly.”

Silk first came up with the idea of extreme chair sitting back in 1995, during a six-month sojourn in Israel. Silk was reading The Haj, a novel by American author Leon Uris. In it, he came across a scene that depicted a man somewhere in the desert, awaiting a delivery. A traveler who happens upon the man and asks, “What will you do if it takes a week?”

Silk found a world in which “time is of no consequence” appealing. Five years later, he decided to give his own waiting-in-the-desert a go. His goal was to sit in one place and spend the entire day watching the arch of the sun.

Unfortunately, his first foray into chair-sitting was short-lived. Just three-and-a-half hours after planting himself down in Arizona’s Sedona desert, Silk had already endured a bee sting and was experiencing severe bloating from copious amounts of cheese he’d eaten the night before. By 9 a.m., he was through.

Still, over the next two decades, the idea of desert chair sitting stuck with him, until in 2019, he decided to try again, this time in Joshua Tree National Park a year later. Little did Silk know that it would be the absolute perfect sport for the era of social distancing.

Silk scouted a spot in Joshua Tree that was fairly accessible, though away from any parking lots or hiking trails, with plenty of direct sunlight and a 360-degree view. Then, dressed in a long-sleeved shirt with light SPF protection, long pants, hiking boots, and a wide-brimmed hat and shawl for his neck, he sat. In addition to his chair, his provisions included beef jerky, chunks of fresh watermelon, and energy bars, and two gallons of water. He’d also packed a couple of books, a journal, and a tube of SPF 50 sunscreen.

Over the next fourteen-plus-hours, Silk did a lot of nothing. He watched several large beetles and a couple of lizards wander past. He dozed off a time or two and stood occasionally to stretch and relieve himself. He also thought about random things, like whether a thoroughbred truly is a better athlete than a greyhound. But more than anything, he just sat. “Your surroundings matter,” says Silk. “Because that’s all that there really is.”

Silk and his friend, Peter Wick (who filmed Silk’s Joshua Tree stint), are currently in the process of securing grants for a chair-sit in Chile’s Atacama Desert—one of the driest places on earth—where they’re hoping to bring along a competitor. “With the rigors of any physical endurance challenge,” says Silk, “I think extreme sitting has the ability to rival other outdoor endurance sports, including climbing and even pole sitting.”

For anyone who’s thinking of engaging in this competitive pastime, Silk’s advice is to start slowly: maybe sitting for a few hours or in weather that’s not too hot or cold, before working toward longer, tougher sits. But his biggest tip is to stay mindful. “When you’re doing full-day sits,” says Silk, “the sun, cold, or wind might start getting to you. Just remember that this is an extreme outdoor sport and dealing with physical discomfort is part of being an endurance athlete.”

Soil Scientists Dig Deep to Understand the 'Skin of the Earth'

Marbles is a serious game in Overton County, Tennessee.
games

Can Welsh Handball Bounce Back From the Brink of Extinction?

The ancient sport of Pêl-Law hangs on, barely, at the last court of its kind. A campaign to revive a related game may help bring it back.
sports