Concrete-O-Rama: The Astonishing Architecture Formed From the Most Common of Materials - Atlas Obscura
Want to see fewer ads? Become a Member.

The man who introduced reinforced concrete to the world demonstrated its genius by using it to build his own house. 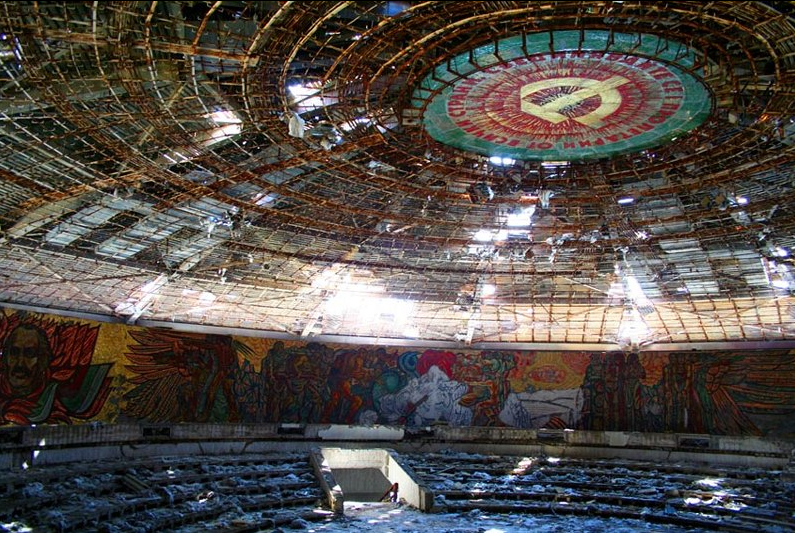 Inside the Buzludzha Monument in Bulgaria (via Buzludzha)

“One of the basic situationist practices is the dérive, a technique of rapid passage through varied ambiences. Dérives involve playful-constructive behavior and awareness of psychogeographical effects, and are thus quite different from the classic notions of journey or stroll.” — Guy Debord

When the new Atlas Obscura website was launched, I decided to experiment a bit with the search engine, wandering around places that I could only reach via the internet—the joy of armchair tourism. Words like “medical museums,” “botanic gardens,” or “churches” would suddenly lead me to the most amazing places, amazing as part of an aesthetic that connects with me directly. But after exploring this topography of crypts and autopsy theaters, I realized I needed to find other words that would generate something more unusual for my tastes.

What if, instead of searching for a place by standards like its function or location, I looked for something more universal, more common, tangible, concrete…

Concrete—as the word echoed in my brain, I became enthusiastic about choosing the grey and brutal material as my new research topic. Reinforced concrete was indeed a perfect and very abstract common denominator. It was a generic construction material, its use common for at least a century. Concrete was not related to luxury and doesn’t have a glamorous reputation. Grey and cold, it evokes a custodial environment, multilevel parking lots, and generally no whimsical wonderlands. Yet the medium permitted humanity to fulfill its babel fantasies of building bigger, higher buildings, chopping the horizontal natural landscape into skylines. 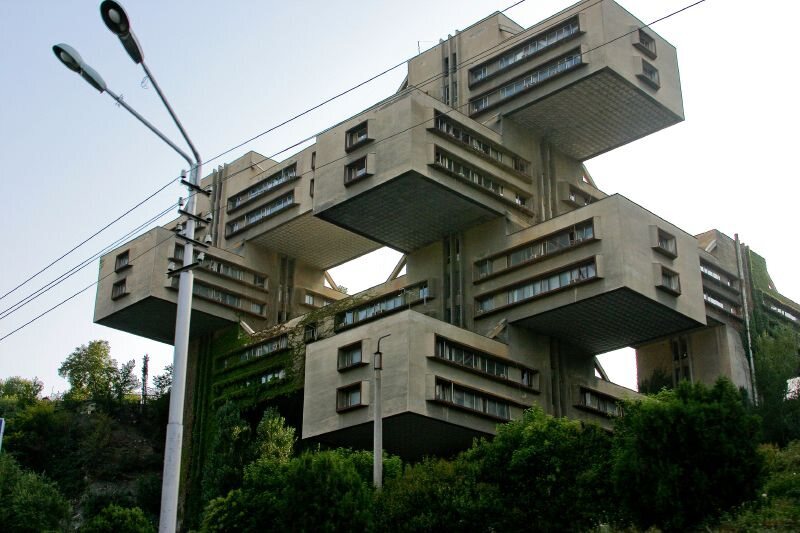 The Bank Building of Tbilisi, Georgia (via Wikimedia)

Curious about what mysteries concrete could offer, I entered the word into the Atlas Obscura database. The results of my quick research were stunning and way more alluring than I expected. Through the diversity of locations and landmarks pulled from the Atlas, a very bizarre portrayal of contemporary mankind emerged. How could the simple mixture of sand, cement, and water encapsulate such a problematic global and individual history of national defense, social utopia and failure, pathological behavior, and the debate on good and bad taste? Choosing concrete as a my search criteria resulted in creating something that reminded me of Guy Debord’s concept of dérive: ”a journey through a landscape on which the subtle aesthetic contours of the surrounding architecture and geography direct the travelers, with the ultimate goal of encountering an entirely new and authentic experience.” This dérive was not just visual, but also conceptual and unlimited in time and space. It led me to the demiurgic and the humble, the minimal and the extravagant, the sometimes threatening and antic, and the always intriguing. It seems the technical possibilities that concrete offered led to pure visual audacity.

The subsequent list of reinforced concrete “incarnations” doesn’t mean to trace the material’s history and innovations. It’s also not an exhaustive overview of what curiosities have emerged from the concrete revolution. This is as fragmentary as it was when I discovered it spontaneously through the Atlas, giving me the opportunity to read and curate entries that previously had no dialogue with each other. So here is a random anthology of constructions and iconoclast monuments of the aesthetically unexpected, spread across two centuries. 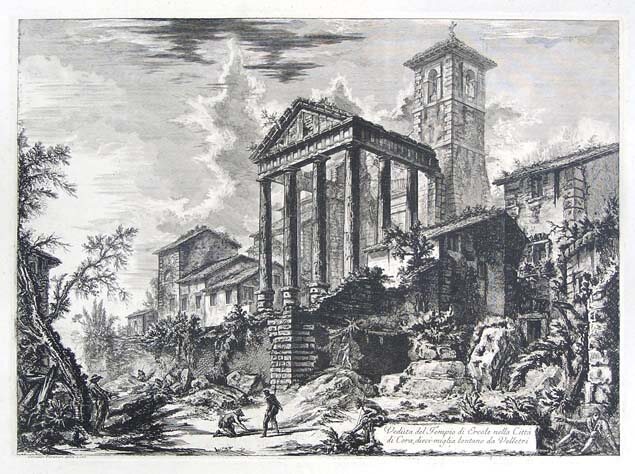 The Temple Hercules at Cori, illustrated by Giovanni Battista Piranesi, 1769

Reinforced concrete is the Oedipus Rex of classical architecture. Invented by the Egyptians and popularized under the Roman Empire, whose bridges and landmarks still exist today, concrete was later lost for almost 18 centuries. Architects and engineers rediscovered the material around 1800 and, during the heyday of the Industrial Revolution, developed techniques to reinforce concrete structures with a webbing of iron or steel, allowing radical changes to occur in the city landscapes. But while the use of reinforced concrete was standardized, architecture was still heavily preoccupied by classical canons inherited from antiquity—symmetry, columns, proportions. Architecture often mimicked iconic constructions of the past. In addition, concrete was considered a vulgar material, often hidden under a fancier façade or other ornaments. 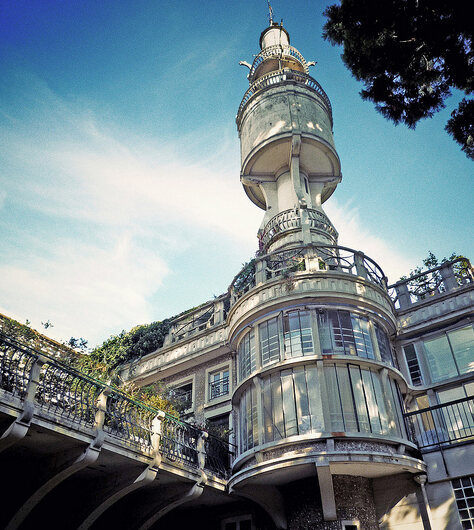 François Hennebique is probably the first architect to radically explore the technical possibilities of reinforced concrete. Hennebique couldn’t care less about recreating the shapes and structures from the past and had no nostalgia for neo-classicism. He was a young entrepreneur and an engineer, owning his own concrete production compagny. What he needed was a P. T. Barnum-esque idea to advertise his business and show the rest of the world that the path to the future was paved with concrete. Designing his family house in 1910, the self-taught builder imagined a manor that included three criteria—Light, Flowers, and Water—creating a dedalic ensemble of balconies, panoramic windows, and suspended gardens all shaped in raw concrete, without any references to ancient style. By demonstrating for the first time the efficiency of the modern material, Hennebique achieved a reputation both for himself and his company, and established a plan for more than two thousand concrete constructions. 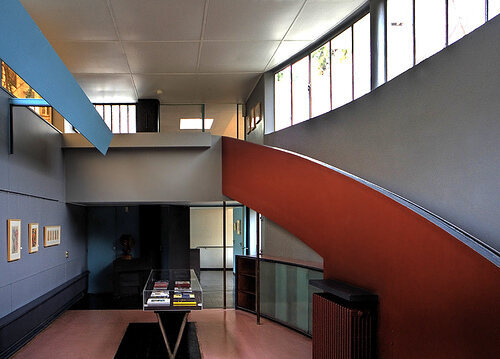 Shortly after, Swiss architect Le Corbusier would commence a total “Tabula Rasa,” giving the finishing blow to classicism by renewing architectural principals using reinforced concrete as his warhorse. Echoing Cubism and the Avant Garde painters, Le Corbusier theorized a concept of “promenade architectural,” in which walking into a house was a pathway through an arrangement of geometric and perpendicular outlines, playing with shapes that only concrete had the ability to hold. 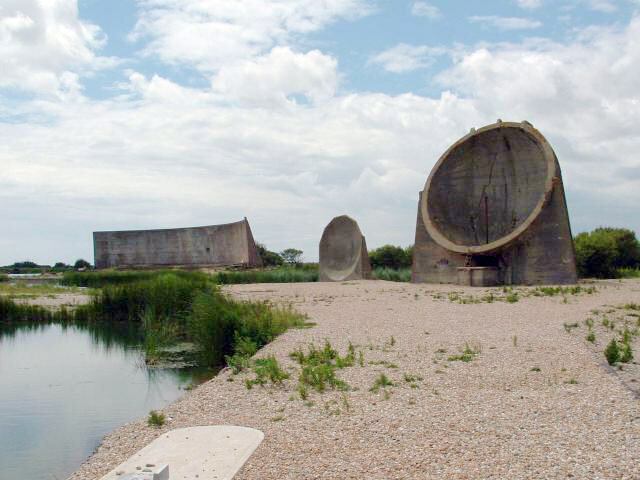 The Greatstone Sound Mirrors in Kent, England (via user-submitted image)

Reinforced concrete is a chameleon material that can be shaped into many forms without the risk of collapsing. Therefore, it’s not surprising to find some examples where its polymorphic potential was been exploited to generate, receive, or amplify sounds. The best known example of concrete sonology was built in the 1920s, and not for Dada or any other art or music-related experiment, but in the colder world of defense strategy. Before the invention of radars, British military engineers created colossal acoustic structures in order to amplify sound waves. Looking a bit like the odd Easter Island statues, the austere concrete reflectors would capture the roaring sounds of planes and thus alert those on the ground to a potential attack. The fast development of aeronautics made them obsolete in ten years, and more than 20 of these sound megaliths were abandoned in the fields, giving a lunar-look to the British countryside.

The contemporary counterpart to the Sound Mirrors may be the recent work of sound artists Bruce Odland and Sam Auinger on their Harmonic Bridge in North Adams, Massachusetts, where the constant vibrations of 16 concrete cylinders placed like colomns under a bridge transform the roadway noise into a permanent drone in the key of C. Modulated by the speed and rhythm of cars passing on the bridge, the installation changes the disenchanted parking lot of MASS MoCA in a hypnotic live experience.

Some of the most visually spectacular uses of concrete date to post-WWII, with Brutalism and Neo-Brutalist architecture, when Europe, decimated by bombing, was looking for quick ways to rebuild. Concrete was the quickest and the cheapest solution to reanimating cities that had been turned into dust. Needless to say, at this time the early “low down” connotation of raw concrete was not the main issue, the priority for countries like Germany and Soviet Union being to construct utilitarian housing for the destitute, public facilities, and memorial monuments honoring their martyrs. 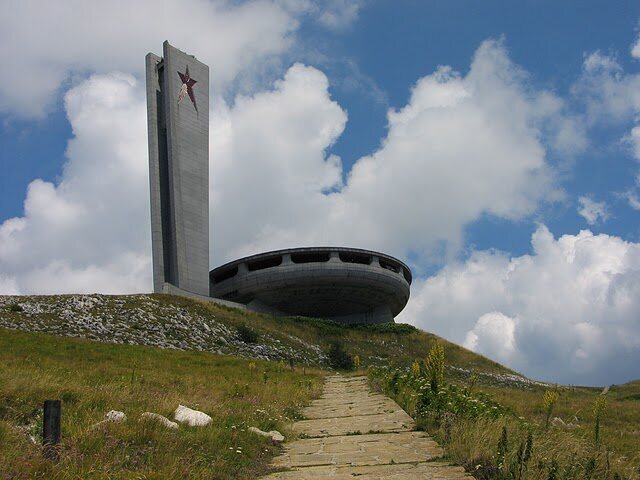 The Buzludzha Monument in Bulgaria (via Artificial Owl)

Once despised for its depressing appearance, some examples of Brutalism are now celebrated for their puzzling beauty. Some evoke the Soviet obsession with the cosmos, like the Buzludzha Monument in Bulgaria. Others, like the Bank Building of Tbilisi, show the influence of Constructivism and Supremacism, while many of them are just demonstrations of futuristic megalomania. Many Brutalist buildings are now decaying or abandoned, modern ruins of the Communist era, and attract legions of urban explorers and artists drawn to this landscape of retro-future dystopia. 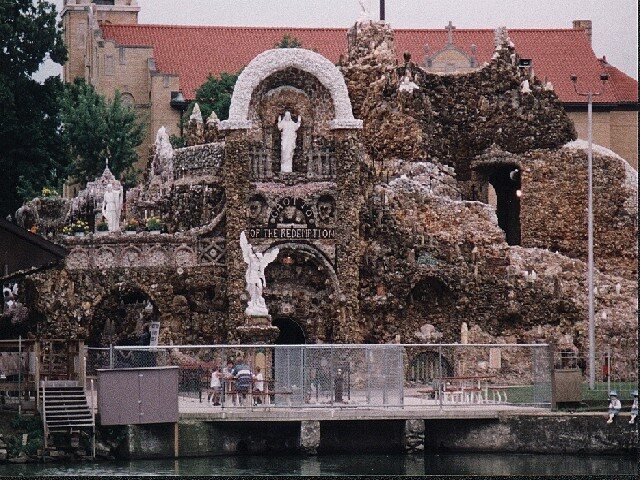 Concrete is also the play dough of Outsider Architecture. One peculiar aspect of concrete is its democratization of architecture to a certain degree: it’s cheap, easy to produce and to manipulate, and concrete has introduced a surprising array of amateurs the joy of construction. But for some of them, this hobby can bring out some pathological issues.

Diagnosed as Concretia Dementia, the syndrome commonly manifests in people who are retired, convalescent, or suddenly free of any professional activities, and they develop a frantic urge to build palaces or sculptural landscapes with their own hands. Grabbing glass bottles, pebbles, or beer caps, they turn this junk into sculptural wonders and mosaics. Some of them, like Father Paul Dobberstein’s Grotto of Redemption, celebrate religious devotion. The obsession sometimes lasts a lifetime and often only ends when the architect reaches his or her own end. These constructions often result from a primal fear of mortality. 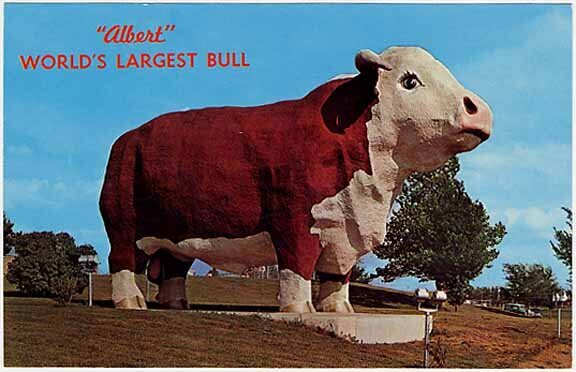 The amazing Albert The Bull! In Audubon, Iowa (via user-submitted image)

Of course, there are many other fascinating places that push concrete to an awkward lyricism  Bunkers, Buddha gardens, and even commercial architecture with its many gigantic representations of tiny things, like giant potatoes, giant trolls, giant lemons, even a giant bull! So I encourage you to challenge the Altas Obscura search a bit. A simple word can sometimes lead you to realms of pure extravagance.

An Ode to an Anatomical Venus: Waxing Poetic on the Uncanny Allure of 18th Century Dissectible Women