In 1980, an Earthquake Destroyed an Italian Town—and Revealed Another - Atlas Obscura
Want to see fewer ads? Become a Member. 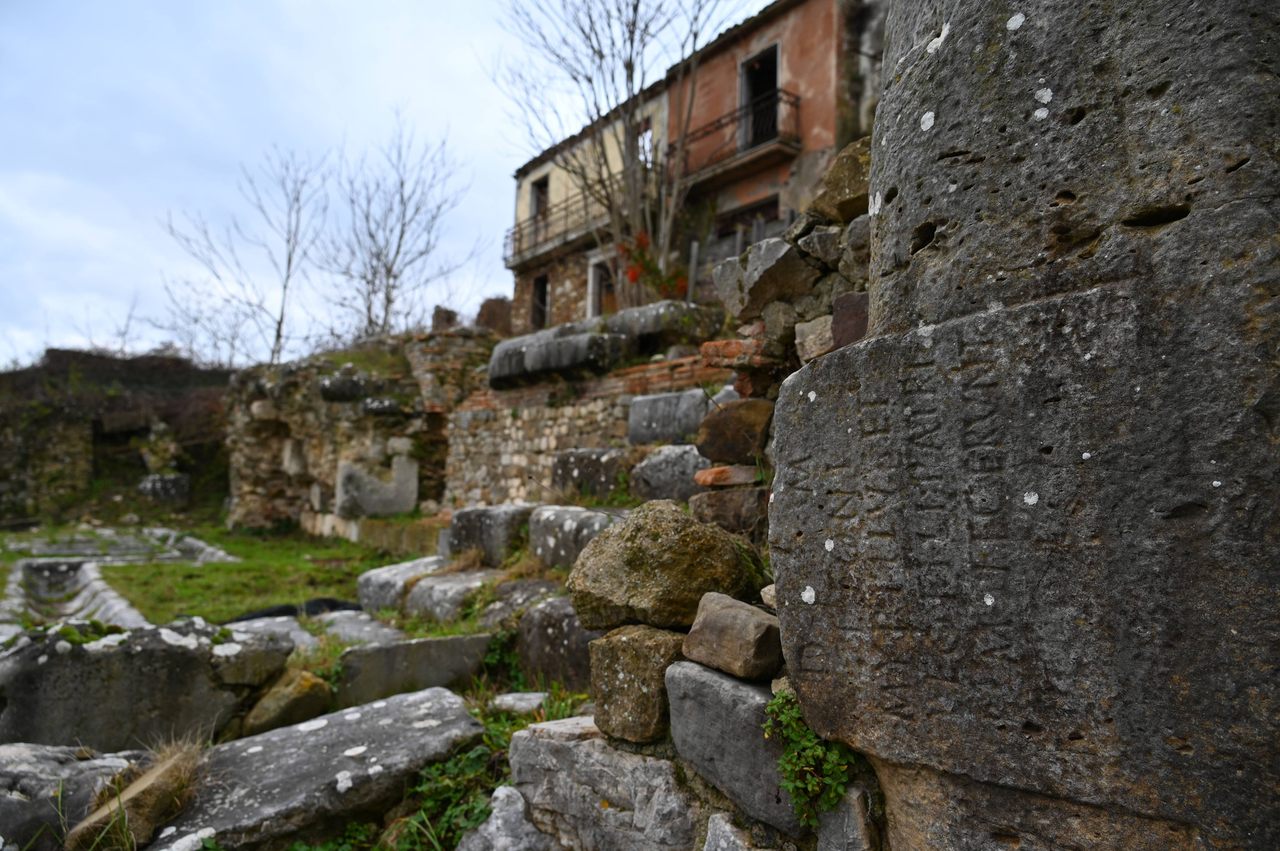 A block carrying an ancient Roman inscription was reused in a medieval wall in Conza. On the left, the remains of the Roman forum can be seen below street-level buildings that survived a 1980 earthquake. Federico Formica
In This Story
Destination Guide

The thousand-year history of Conza della Campania, a town in the southern Apennines of Italy, was interrupted by the earthquake of November 23, 1980. A magnitude 6.9 tremblor, it killed 2,914 people, including 184 in Conza alone. If one travels to “Conza della Campania” today, they will be in a different place, a new town of modern villas, with large roundabouts and a regular plan. Many other towns were rebuilt after that disaster, right where they had once stood. But not Conza—it was moved because of what the damage of the earthquake revealed.

On a hill overlooking the modern town are the ruins of the original Conza. It is a unique place, even by Italian standards, where every development project turns up centuries of history. In Conza, the ruins of 41 years ago coexist with an ancient Roman city, Compsa, which had been hidden under houses, cellars, and streets until bulldozers dug to remove rubble after the quake. As an archaeological site it has layers—including all the eras between ancient and modern—but the experience of being there seems to flatten centuries of history so they all appear to exist in the same place at the same moment.

“The image of the ancient city seems to have been preserved as a cast beneath the urban fabric that slowly formed in the following eras,” writes Vincenzo Di Giovanni, archaeologist and head of a 1997 excavation campaign in Conza for his doctoral thesis. Compsa, which has been inhabited since the sixth century B.C., had been especially hostile to the Romans, so when they conquered it they decided to “Romanize” the town by adding a forum, an amphitheater, and baths. Compsa became a miniature version of Rome itself, “a reflection of Roman power and order, but especially a reflection of its ability to civilize and administer,” writes Di Giovanni.

The forum square is the most well-preserved Roman artifact: a carpet of limestone slabs, various inscriptions and bas-reliefs, the bases of two temples, one perhaps dedicated to Venus. But none of this was visible until the end of 1980, and it never would have been seen if not for the disaster.

The Compsa forum was a square until the early medieval period, when the inhabitants began to build on it. For centuries, it held houses, along with a smaller square, and part of the eastern side was occupied by the Cathedral of Santa Maria Assunta, which collapsed almost entirely during the quake and has been partially restored. The forum had been more or less forgotten, though sometimes hints of something ancient peeked through.

Luigi Lariccia, who was born and has always lived in Conza, is a retired professor of Latin and Greek. He points to a part of the drainage channel that bordered the ancient forum: “Here was the cellar of a house. In 1930 the archaeologist Italo Sgobbo visited this basement and caught a glimpse of that drainage channel. So he sensed that there could be a Roman forum.” Some cellars, in fact, rested directly on the Roman marble paving. “Those structures had no foundations, this explains why they could not even withstand the slightest earthquake,” says Clemente Farese, who was 21 on the day of the earthquake and is former president of Pro Loco Compsa, an association that promotes local tourism, now directed by Antonella Petrozzino.

Lariccia had lived in Conza for 29 years before that November evening in 1980, when he lost his house—and many friends and several relatives. He now views the Roman remains that the quake revealed with a kind of distance. “Over time I realized that sentimentality has to be put aside,” he says. “I prefer to be detached when I talk about Conza. I don’t want to talk about what we have lost but what we have rediscovered. Today our life, our reality, is there,” in the new village below.

Today the Compsa forum is exposed, and walking through it is like being in two times at once. About 10 feet or so above the forum, where the 1980 street level was, one can see the facades of some of the very few houses that survived the earthquake. Above, there are open wooden shutters, below, a pedestal with an epigraph dedicated to the emperor Constantine I.

Between the Roman level and the modern level there are fragments of medieval walls, and Roman marble and stones reused in the foundations of subsequent buildings, including the cathedral. Earthquakes had destroyed it twice before, in 990 and 1732, and the people of Conza had always rebuilt it. After the town was abandoned for good, archaeological excavations under the church building uncovered various layers: a Lombard tomb (from the Germanic people who ruled Italy in the seventh century), several other tombs, and more than 150 skeletons. At the place where the bell tower collapsed in 1980, archaeologists made one of the most important discoveries: a bas-relief, in perfect condition, that served as the porta urbica, or the entrance gate to the forum. In 1680, to save time and trouble, the city gate was moved and then used in the base of the bell tower.

Amid the Roman and medieval ruins are others that recall the ruins of Pompeii—perimeter walls of homes and buildings just a few feet high are all that remains of them. But look closely and you’ll see modern kitchen and bathroom tiles in them, and Lariccia remembers exactly who lived in them just a few decades ago.

Ancient sites such as Nan Madol, the "Venice of the Pacific," may need to be reconsidered thanks to new evidence about sea level change.
cults

To uncover new clues about the secretive world of Mithraism, scientists considered evidence right at their feet.
exploration

Since their discovery more than 60 years ago, the "Fishbones" tunnels beneath the French city have been an enigma.
islands

A rich local history has long been overshadowed by a few months under a Russian flag.
Video • PinDrop

1:26
Want to see fewer ads? Become a Member.
From Around the Web
Atlas Obscura Trips
Culinary Naples: Producers, Purveyors, and Pizzaioli
View This Trip
Thanks for sharing!