How a Giant, Stinky, Delightful Corpse Flower Got to an Abandoned Gas Station - Atlas Obscura
Want to see fewer ads? Become a Member. 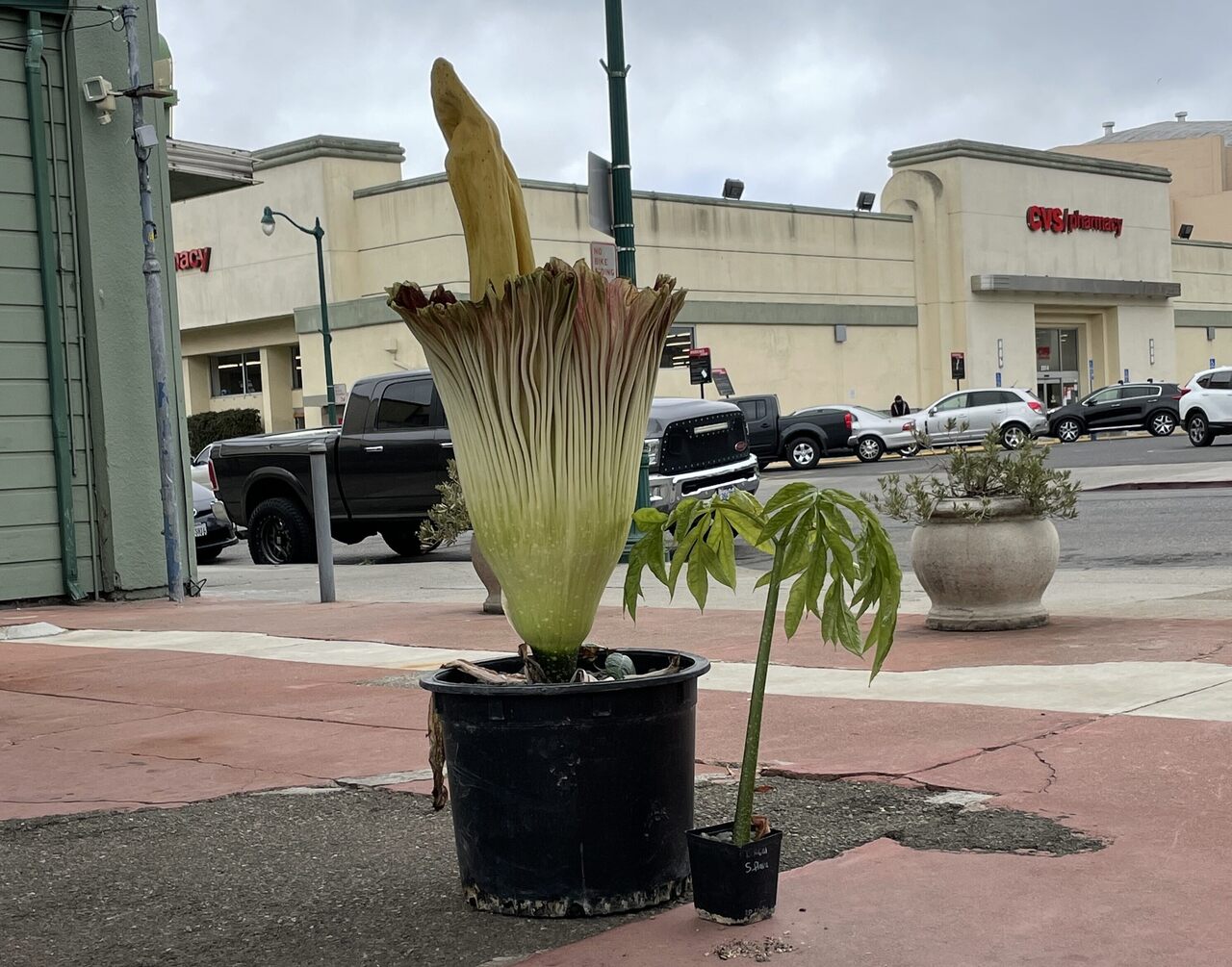 As the coronavirus pandemic ushered people into their homes, worlds contracted to the ecosystems contained within four walls and whatever nearby landscapes one might encounter on a walk. Confinement didn’t quash curiosity, though, and many people became diarists of their own humble, local wildernesses. Some chronicled the way that buds gave way to flowers. Others picked up binoculars and met the neighborhood birds. More humans logged interspecies encounters on the iNaturalist app last year than ever before.

Many of us doted on houseplants, but probably not the way that Solomon Leyva did. Leyva lives in Alameda, California, an island just west of Oakland, where he raises and sells cacti, succulents, and rare plants. One of Leyva’s pandemic-era pals was a titan arum (Amorphophallus titanum), a gargantuan plant better known as the corpse flower on account of the unmistakably unsavory stench of its blooms. The plant usually shows off like this only once every several years—and when it does, its glorious fringe wilts after just a day or two. So, when Leyva’s titan arum bloomed in May, he lugged it onto a wagon and rolled it to a patch of asphalt in front of an abandoned gas station, so human neighbors could come say hello.

Atlas Obscura talked to Leyva about caring for the plant, gas station gawking, and cultivating patience.

Is titan arum a finicky plant? How do you grow it?

The plant lives in a giant, twin-wall polycarbonate greenhouse that’s about 3,000 square feet. I’m able to control the climate somewhat inside the greenhouse. This particular species isn’t very hard to grow at all: It likes to stay above 60 degrees, but it can go below that. It just doesn’t want to freeze. I have heat mats, and run them at 75 degrees, 24 hours a day.

When it’s growing, you really want to feed it a lot. Before it flowered, it was getting watered three times a week—soaked all the way through. I use a hose that’s connected to my well, and the water is usually around pretty neutral acidity. They like a lot of calcium, and there’s dozens of liquid fertilizers that can provide that. I was using just this cheap, generic plant food, but it was getting a little bit every single time it got watered.

This plant has filled its 25-gallon pot. Usually when you see one of these, you’ll see that [the custodians] either constructed or purchased a giant pot for the bulb to be in. I think what happens is a lot of the water and nutrients escapes the bulb through the medium around it. I can put it in a pot five times this size and it would look normal, but I’m not planning on doing that. This one, whenever I water it or fertilize it, it’s getting most of [the nutrients] because there’s nowhere else for the stuff to go. In Sumatra, where it’s grown, the land is very rich, so that’s what it wants. Once you get [plants] in a controlled environment, you can accelerate the growth on almost anything.

This particular plant bloomed three years ago, and it was already ready to do it again. I’ve kept titan arums for years in my greenhouse. I’ve had three mature ones in the past, and I currently have 16 or 18 of the plants. This particular one hasn’t been with me forever, but I’ve always had them around. They’re pretty indestructible. The only enemy they have is nematodes.

When did you realize that it was about to bloom?

When the stalk came out. It’s almost conical, or the shape of a spear. It came up sort of oblong, fat on one side and tilted. So you know right off the bat, “That’s going to be a bud and a bloom.” The lack of symmetry is what gave it away.

What has the pandemic been like for you? Did it change your relationship to plants?

I think a few things are happening at once. I think people are less enthusiastic about having children, but they still have the need to nurture; I feel like all the people getting into plants now are sort of doing it in lieu of having children. And I think the human species has lost its connection to nature, and it’s passionately trying to get that back. And I don’t think it was just the pandemic. I quit my job doing logistics for a high-end antiques company [in favor of selling plants] because [demand was so high] it was costing me money to go to work. That was already happening before the pandemic. Plant sales had been up since before this happened. And then when COVID happened—people being stuck at home and looking for things to do—my sales went up 300 percent, at least.

I’ve sort of found myself shuffled into a life of symbiosis: I care for a massive collection of plants and they care for me by providing seeds and cuttings that I sell to pay my bills. So I’m caring for them, they’re caring for me. Since I was young, I felt like I just didn’t fit in on Earth at all. I mean, I failed from second grade all the way up to sophomore year. All my grades were Ds and Fs. I didn’t get along with school. I didn’t get along with anything.

All I ever did was as a kid was catch bugs and lizards and look at plants, and I had two treehouses. Then I got sidetracked with all this school bullshit and career bullshit. I thought for a while that I was wrong and that I just needed to pursue work, but then I ended up finding out that, nope, I was right—we’re supposed to be connected to nature, and it’s good for us. I’m happily working with plants now.

What made you decide to take the flower out on the town?

What’s the point in having it? It was only going to bloom for a day—I mean, I have to share it. I don’t know what else I would have done.

There’s a really great, cute little community in the city that I live in, and I just thought everybody would enjoy seeing it. I was out from 9 a.m. to 8 p.m., and again the next day. The first day, it was really cold and [the plant] wasn’t enthusiastic about opening all the way. The second day, it had been in my greenhouse and opened more. Everybody was fascinated and happy—they’ve had their [vaccine] shots and are wanting to come out.

The cute Art Deco gas station that’s been out of commission for over 30 years across from city hall—I couldn’t think of any better place to bring it. Everywhere else has sidewalks or patio seating for restaurants. Also, I had to put in a wagon and was pulling it down the street, and I didn’t want to go across town. I couldn’t fit it in my van; it was too tall. I’m 5-foot-10, and it was a few inches shorter than me.

Nearly everyone remarked about the smell, but some didn’t find the smell until it wafted up with the breeze. Everyone took their mask off to smell it. I let kids play with it, dogs jump up on it. There’s no sense in protecting something that’s only going to live for a day. Everybody just has their memory, and that’s all you get. What better way to say goodbye to the pandemic than to watch a corpse flower bloom?

What’s the plant up to now?

I beheaded it and left the bloom there and took the rest of the plant home. People played with [the bloom] for a few days—I saw some little kid holding it, and an old lady took some petals and made an ink print and made some art with it.

I think everyone really needs to learn how to take care of plants. Everyone needs to learn how to plant something, wait for it, grow it—there are so many metaphors in life that are tied to understanding and the process of growing things from seed and watching them mature. I’m going to do another event in my city. I’m trying to get a bunch of kids to plant. I just feel like every kid should understand growing and patience and that what you do has an effect on things.

The whole stalk turns into pus and fiber and other mucus-y-like substances, and then dries out, then it’ll sleep for a while. After a bloom like this, it should go dormant for a while—a few months, if not an entire year, where it doesn’t do anything. It’s probably really tired and spent.

The Unknown French Horticulturist Who Made Lilacs Happen

If you've ever enjoyed a stroll through a modern garden, thank Victor Lemoine.
art

Raku Inoue is now finding inspiration for his precise, ephemeral works in his backyard.
roads

Pressed plants can be your journal of the pandemic.
Video • Wonder From Home

6:55
Want to see fewer ads? Become a Member.
From Around the Web
Related

In botanic gardens, the lineage of a famously smelly plant is threatened. What can save it?
Read more
Thanks for sharing!