How Could a Crocodile Spend Years Cinched By a Tire? - Atlas Obscura
Want to see fewer ads? Become a Member. 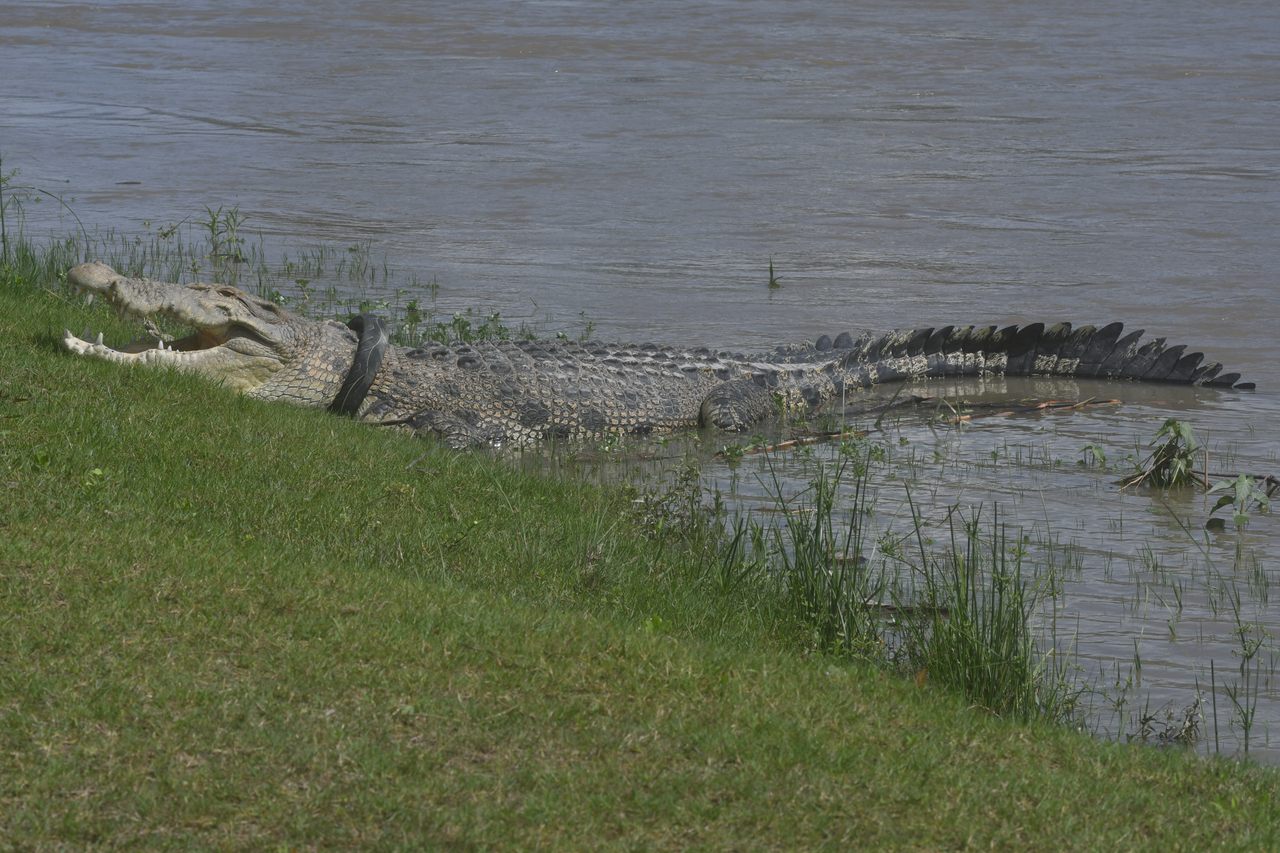 Many animals ensnared in trash don't have long to live, but this one appears to have adapted. Getty/NurPhoto/Contributor
In This Story
Destination Guide

(Update! The crocodile has apparently been freed, according to the BBC and other news outlets. A local man named Tili, who described himself as a self-taught reptile rescuer, spent weeks tracking and trying to trap the tire’d croc before finally succeeding. Recently released video shows him using a small saw to cut through the tire.)

For years, people in the Indonesian province of Central Sulawesi have been able to easily identify a specific crocodile stalking the Palu River. In some respects, this one looks like many others: It’s mosaicked with mud-colored scales, boasts a long-and-strong tail, and brandishes powerful, cone-shaped teeth. But there’s one foolproof way to distinguish this croc from its kin: It wears a rubber tire like a collar.

The crocodile has been trapped in this tire for around five years. In the 21st century, it’s not especially unusual for an animal to get ensnared in human trash, with sometimes lethal consequences: In a study published last year in the Journal of Hazardous Materials, researchers estimated that roughly 570,000 strawberry hermit crabs—which look like a fistful of red gummy worms stuffed into a piece of conchiglie pasta—become fatally caught in plastic debris each year on Henderson Island and the Cocos (Keeling) Islands, freckles of land in the South Pacific and Indian Ocean, respectively. Researchers have also recently tracked how fish, birds, and other creatures end up entwined in plastic gloves, face masks, and other pieces of PPE cast off during the COVID-19 pandemic.

“Aquatic environments are the number one place where this sort of thing happens,” says Sara Ruane, a herpetologist at the Field Museum in Chicago. Sure, a balloon could blow into a tree, Ruane adds, but crocs and other swimming reptiles often travel into garbage-studded areas face-first, with nothing to stop a tire or a set of six-pack rings from encircling them.

But five years is an awfully long time to be trapped—many creatures trapped in or bogged down by trash would be long dead by that point. So how has this animal survived, and what is the tire doing to it?

If the animal was ringed by the tire when it was young, when crocodiles grow most rapidly, the rubber loop may have permanently constricted its growth, and led to indentations, discoloration, or bent scales. But, according to Kent Vliet, a biologist at the University of Florida who specializes in alligators and crocodiles, as long as the croc can continue to eat, it should hang in there. Based on the animal’s appearance, Vliet doesn’t think it’s going hungry. “It’s not the fattest crocodile I’ve ever seen,” he says, “but it’s got a good body weight on it.”

Judging from photos, the tire is encircling the reptile’s throat, which includes the larynx, esophagus, and trachea. While the animal is probably able to breathe and vocalize just fine, the tire could constrain the size of prey it can consume, says Vliet, who suspects this crocodile is either a saltwater crocodile (Crocodylus porosus), or a hybrid of a saltwater croc and the endangered Crocodylus siamensis. In addition to smaller prey (such as fish and water rats or rabbit-sized mammals), saltwater crocodiles go after some pretty enormous meals—including, occasionally, humans. In Australia, they are known to feast on water buffalo, kangaroos, and wallabies. The crocs don’t always go for these bigger challenges, but “if they can, they will,” Vliet says. They manage it by distending their throat, which stretches from their eyes down to their front legs. “That would be restricted with that tire,” Vliet says. “I’m imagining that would make it impossible to take a large prey item.”

The tire could also make it harder for the croc to hunt. The rubber ring is bulky and obvious, two qualities that make it hard to be stealthy. “These animals are ambush predators, which is another way of saying they hang out at water’s edge and pretend to be a log until something comes along,” says Stephanie Drumheller-Horton, a paleontologist and adjunct assistant professor at the University of Tennessee, Knoxville, who studies crocodilians. As the croc swims near the surface, the tire probably sets the water rippling, tipping off prey and making it “harder for that animal to go about its normal business,” Vliet says.

The impact of the conspicuous tire might also make this individual vulnerable to his own species, especially if the animal occupies a low rung of the local social ladder. This species is notoriously territorial, and “dominant males are pretty hard on subordinate males,” Vliet says. The tire ringing the snout creates a striking silhouette, which could “increase the ire” of dominant males, he adds, and provoke aggression. The fossil record is stuffed with evidence of the animals fighting each other, Drumheller-Horton says, and “before we came along, usually the biggest threat to a crocodile was another crocodile.”

In the wild, some crocs achieve septuagenarian status—saltwater crocodiles can live up to 75 years—and Vliet doesn’t think the tire will necessarily shorten the creature’s lifespan, unless it catches on something. That has been a familiar scenario since biologists began collaring the animals with radio trackers decades ago. When scientists strap cameras or radios to alligators or crocodiles, the reptiles “do a pretty good job of getting it caught” on vines or tree roots jutting from the water, Vliet says. Biologists now often opt for hydrodynamic tracker designs—far lower-profile than an old tire. Getting snagged on land or in the water could have dire consequences if the croc can’t free itself.

Vliet and Drumheller-Horton agree that the best way forward is to enlist trained professionals to capture the croc and remove the tire, maybe by cutting it off. However, previous attempts to capture the croc and remove the tire—including a scheme to bribe it with chicken—have been unsuccessful. “The problem with crocs is, when you start trying to catch them, they get wary—and any time you look at them sideways, they disappear on you,” Vliet says.

Meanwhile, this poor crocodile has become a curiosity, and a living reminder that human actions such as indiscriminate dumping have far-reaching consequences. Trash cans, drains, and recycling bins aren’t chutes through which our garbage vanishes. It can still have an afterlife. “Our trash goes somewhere,” Drumheller-Horton says, “and it can end up affecting animals in unexpected and negative ways.” This crocodile is dragging the legacy of our pollution around with it. And Ruane notes that, unfortunately, many other animals have it far worse. When we see a trash-trapped creature that’s alive, we’re “probably seeing the exceptions,” Ruane says. “You’re not seeing the ones that didn’t make it, or weren’t able to grow around the problem.”

Locally Famous Foods Are Now Getting Plaques Like Historical Sites

Caddisfly larvae are adapting to polluted waterways, but their recycling strategy has its drawbacks.
science

Sharks, beavers, and humans are all returning to London's iconic waterway thanks to decades of restoration work.
science

Embryos of one of the world's most unusual amphibians become art in the eyes of a biologist and wildlife photographer.
islands

Scientists, residents, and visitors have banded together for a massive biodiversity survey of British Columbia's Galiano Island.
Video • Wonder From Home