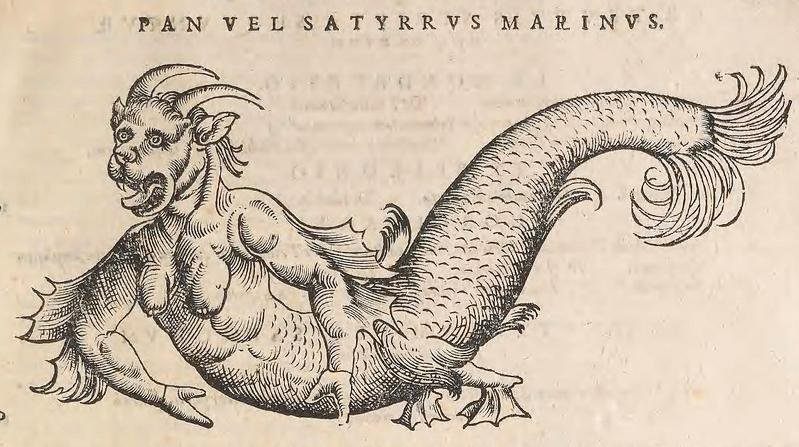 A "sea devil" from Icones animalium (1553). Conrad Gessner/Public Domain
In This Story
Place

This mummified mermaid corpse is an aquatic curio that was eventually revealed to be a fake.
Place

A mythical chimera first sculpted in 1936 as a mix of the main animals of Texas livestock.
Place

A cryptid is a creature whose existence, diplomatically put, cannot be proved or disproved by science. Cryptid lore tends to be less fantastical than ghost stories or fairytales, but not altogether believable. For some though, an unusual rock, unexplained crop circles, a footprint, or some hair are all the evidence they need that there are creatures unknown to humanity, hiding in the woods.

In these places, tales of mysterious creatures have become so embroiled within local narrative that whether the beast actually exists or not doesn’t matter anymore. Can you imagine Loch Ness without its monster?

The Sasquatch, or as it’s colloquially known, Bigfoot, is America’s best known cryptid. It is typically depicted as a giant ape, standing around seven feet tall. Sasquatch lore extends back to American Indian mythology, which describes hairy wild men living in the woods. Anomalous sightings continued into the 20th century, but Sasquatch mania reached its peak following the famed Patterson-Gimlin tape.

Bigfoot is generally associated with the Pacific Northwest, with most sightings reported in Washington. Ape Canyon was the site in which a group of miners came under attack by a gang of wild “apemen” in 1924. According to the five miners, all of whom survived the incident and seemed convinced of its facts, they were asleep in their cabin when the assault started, and the beasts seemed out for blood. The event was widely publicized and no logical explanation was ever found.

The Sasquatch mythos has caught many in its spell. Refusing to accept claims that Bigfoot sightings are actually black bears or intentional hoaxes, believers continue their search for the hidden primate. California, Oregon, Washington and Canada are dotted with Sasquatch museums and research institutions for those who want to see footprints, photos, and other evidence.

Bipedal hairy beasts aren’t confined to the West Coast though. Illinois and Ohio have remarkably high rates of Bigfoot sightings, and Arkansas has its own permutation: the Boggy Creek monster.

Florida has its own version of Bigfoot too. Its presence is announced by the foul odor that earned it its nickname: the Skunk Ape.

Ever since sailors first traversed the ocean they have returned with stories of unbelievable creatures emerging from the murky depths. Perhaps it’s because we didn’t (and still don’t) really know what lies beneath the ocean’s surface, a whale or squid could be mistaken for the Leviathan or a Kraken.

That lore is celebrated in places like Skrímslasetrið, Iceland’s sea monster museum. Maritime history is inextricable from Icelandic identity, which includes many tales of ocean beasts lurking just off the edge of the map.

Creature stories also provided a useful explanation for misunderstood natural phenomena. The geyser of Kauai’s Spouting Horn blowhole was originally attributed to a giant lizard monster trapped beneath the rock.

Lakes have their fair share of mystery too. The Loch Ness Monster is the most widely known, but prehistoric serpentine beasts have been reported on almost every continent.

EPENA, REPUBLIC OF THE CONGO

That said, not all sea monsters take the form of slithering water snakes. The Kelpies of Scottish lore are massive demonic horses found in rivers and streams.

Mermaids are another sea beast, albeit a significantly more alluring version. Much of our modern mythos surrounding mermaids comes from Hans Christian Anderson’s The Little Mermaid, but before the 19th century, mermaids were thought of as the deceptive, even evil sprites, no doubt based on the sirens in Homer’s Odyssey.

The myth of Feejee mermaids was transported to the West from Japan. Travelers saw mummified “mermaids” in shrines like the 1,400-year-old one at the Tenshou-Kyousha Shrine. Allegedly, this mermaid was once a fisherman who trespassed in protected waters and was transformed into a hideous creature as punishment.

These weird hybrids, crafted from the upper half of a monkey and the bottom half of a fish, may have been inspired by the Japanese kappa, a mischievous water spirit.

Despite the fact that they were nothing like the lovely fishtailed maidens of fairytales, Feejee mermaids (as they came to be called—allegedly brought back from Fiji, not Japan) captured the Western imagination. They were quickly disproved as fakes, yet after P.T. Barnum had one in his famous sideshow, no cabinet of curiosity was complete without one.

Feejee Mermaid at the Nature Museum

The chimera, another creature of Greek mythology, was said to have the body of a lion, the head of a goat, and a snake for a tail, though today the term is applied to any creature with the body parts of various animals. Nobody does body horror like the Ancient Greeks, whose Minotaur myth (the half-man, half-bull trapped as the protector of the labyrinth) persists to this day.

Chimera made their way into American folklore. The Texas Woofus in Dallas is a longhorned pig-legged sheep-bird. Its critics call it pagan, and they may not be so far off the mark.

Another American chimera is the Piasa bird, a mysterious feathered beast painted on a rock in Alton, Illinois. The painting has been there since at least the 1670s, though no one knows its origin.

The chimera best known to Americans is the jackalope, a jackrabbit with the antlers of a buck. Mismatched animals like this abound around the world though, likely because hucksters could prove their existence through falsified taxidermy, or “gaffs.” Still, reports of bunnies with massive horns proliferate in the Southwest and elsewhere.

A “Wolpertinger” at the German Museum of Hunting and Fishing

A “Skvader” at Biologiska Museet

Not all cryptids and chimera are leporine and sweet though. Some are more sinister, like the Pope Lick Monster, named after the Pope Lick Trestle Bridge it has been sighted beneath. It is said to be a monstrous man-goat hybrid that lures its victims onto the railway trestle.

The Jersey Devil was another cryptid seen throughout New Jersey in the 19th and early 20th century. In 1909 alone, hundreds of people reported seeing an unknown creature flying over the Pine Barrens, a forested area on the Jersey coast. They described it as something like a kangaroo with hooves and leathery bat wings that would let out a terrifying shriek before disappearing from the sky. The Jersey Devil hasn’t been reported in recent years, though its memory is now thoroughly embedded in New Jersey folklore.

One of America’s more recent cryptids is the Mothman. In November of 1966, numerous people reported seeing a man-like figure with wings spanning upwards of ten feet. Those who saw the creature from their cars reported that its eyes shone red like bicycle reflectors when their headlights hit it. After a local bridge collapsed, killing dozens, Mothman sightings ceased. Conspiracies began to arise. The sightings had all been near the TNT area, a WWII munitions factory, leading some to surmise that the Mothman was a military experiment or an alien visitor.

The mystery was never solved, though skeptics claim it may have simply been an owl. Nevertheless, the story inspired a book and several films, and Point Pleasant commemorates its cryptid with a storefront museum as well as a downtown statue.

Cryptids come from all kinds of sources—misunderstandings of natural phenomena, tall tales, and sometimes, sheer human ingenuity, as with Karachi’s very strange fortune-telling fox woman, Mumtaz Begum. They can become a mascot for the place that claims them, a weird source of pride for the people that live there.

Is there a cryptid lurking in your hometown we should know about? Have your own Feejee mermaid or creepy chimera? Add it to the Atlas!

Six Stories of Stunning Passports From Countries That No Longer Exist

There are monsters seemingly around every corner.
cryptozoology

This terrifying creature has evolved over millennia—but never lost the need to feed.
Video • AO Docs

1:34
Sponsored by Visit St. Pete/Clearwater
Want to see fewer ads? Become a Member.
From Around the Web
Thanks for sharing!