America's most famous museum of medical oddities is home to the remains of Einstein's brain.

Buttons, safety pins, nails, locks, teeth, loose change, a crucifix, needles, tiny binoculars, a good luck charm, and a toy dog. These are just a sampling of the smorgasbord of inedible objects people have swallowed (and astoundingly lived to know better next time) which are held in Philadelphia’s Mütter Museum. 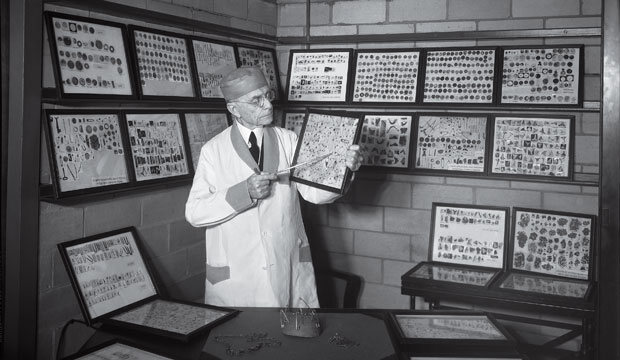 Chevalier Jackson with his Foreign Body Collection (via the Smithsonian)

All of the around 2,000 detrimental delicacies are part of the Chevalier Jackson Foreign Body Collection. As one of the first to practice endoscopy, the Pittsburgh-born Jackson was highly innovative in his groundbreaking approaches to removing (without anesthesia, yikes) objects swallowed by unfortunate people, saving them from an often certain and unpleasant death. He was also a bit obsessive, cataloguing each and every object he removed in flat files (he famously got in a fight with a patient who wanted back a swallowed coin). Jackson also was an artist, giving popular illustrated “chalk talks” (you can watch one online here), and the amassed items appear as much as a conceptual art project as a Joseph Cornell assemblage.

When he died in 1958, his obituary in a Philadelphia newspaper declared him as “one of the greatest, if not the greatest, laryngologists of all time.” For more on the fascinating consumed collection of Chevalier Jackson, we recommend checking out Mary Cappello’s book Swallow. 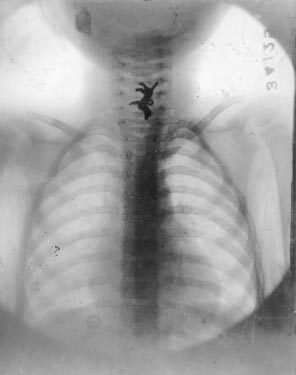