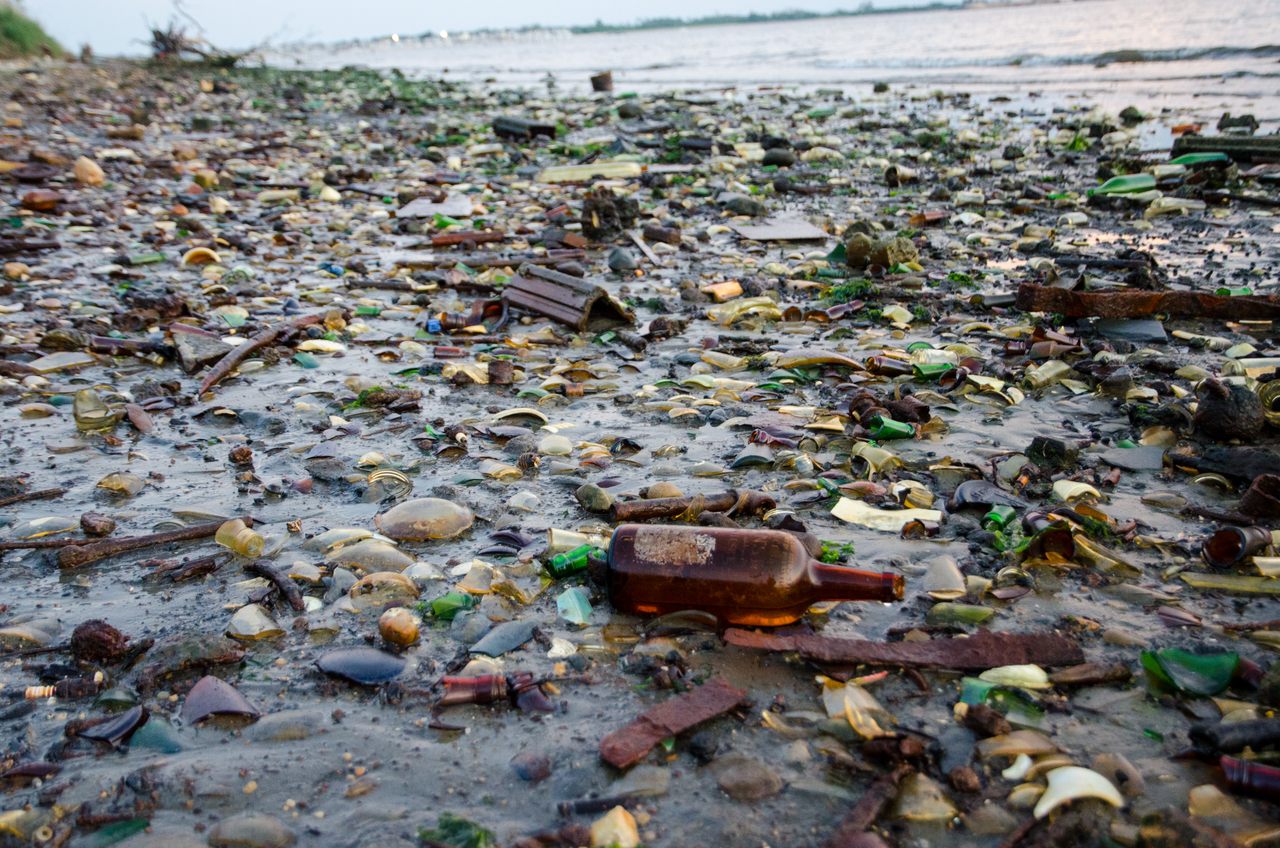 The shore of Dead Horse Bay, photographed in 2015, is known for its trash. flickr/edwardhblake/cc by 2.0
In This Story
Permanently Closed
Place

First a horse rendering plant, then a 19th century landfill, this beach is full of glass from thousands upon thousands of broken bottles.
Destination Guide

Across the world, beachcombers survey sand for little hunks of glass turned smooth and cloudy by a tumble in the waves. People wandering the shore of Dead Horse Bay, along the southern edge of Brooklyn, encounter the motherlode. No need to squint to find slivers of glass beneath tangles of seaweed—the shore often glints brown and green with entire, unbroken bottles. It’s also not uncommon to find intact light bulbs, bits of ceramics or rusted metal, or the soggy insides of old shoes. Tucked around clusters of bushy phragmites, visitors might spy old phone books, or pieces of newsprint chronicling a chat between Winston Churchill and Dwight D. Eisenhower. Many patrol the beach, hoping to find a particularly interesting bit of rubbish. But now, before they reach the shore, they’re likely to spot new yellow warning signs: “Danger Area Closed. Potential Hazardous Material.”

The surprisingly pretty trash spews from the site of an old landfill. Casually capped by the 1950s, it is now eroding, unpacking its contents onto the beach. “It’s easy to imagine [the trash] being brought in by the tide, but it’s the opposite,” says Miriam Sicherman, author of Brooklyn’s Barren Island: A Forgotten History. “It’s getting almost burped by the land where the reeds are, and moving toward the water.” Named for the foul-smelling factories on Barren Island that once made glue, fertilizer, and more from horses and other animals (and then discarded their carcasses in the water), Dead Horse Bay is a popular place for urban archaeology enthusiasts with strong stomachs and closed-toed shoes. Part of the Gateway National Recreation Area, it is managed by the National Park Service, which means that visitors have been able to look but not take. But as of August 2020, even gawking is off limits. After detecting chemical contaminants back in 2002 and gamma radiation in 2019, the Park Service recently declared part of the area closed to everyone but authorized personnel.

According to the Park Service, back in 2019, technicians detected 31 spots where gamma radiation exceeded ambient levels. Upon closer examination of nine of these, they found that in some, deck markers—flat, glowing circles meant to illuminate structures or paths in the dark—had apparently contaminated portions of the surrounding soils with radium. In a release, the Park Service reports that 84 of Dead Horse Bay’s 178 acres are currently off-limits because “a visitor potentially could be exposed to radiological contamination or man-made radiological articles either from unauthorized digging and surfacing a deck marker or other man-made radiological article,” or encountering “an article that may become exposed along the shoreline.” The next step will involve more sampling, then assessing what clean-up might look like—or how feasible that slog would even be.

Some experts believe that the risks aren’t necessarily all that great. “If I saw one of those deck markers, I would probably put on gloves, but not run out of the room,” says Jeffrey C. Womack, a public historian and author of Radiation Evangelists: Technology, Therapy, and Uncertainty at the Turn of the Century. The radium-226 isotope decays into radon gas, which is unsafe to breathe, but “not horrifyingly dangerous in small amounts,” Womack says. Radon has a short half-life, and is most dangerous in enclosed spaces. (Don’t, for instance, stow a radioactive artifact in the trunk of your car.) Womack suspects that the deck markers were slathered with radium paint, which is a problem if it chips off into dust and someone inhales those particles. (Any loose bits can be carefully wiped away with a damp cloth.) “People get twitchy when they realize stuff is radioactive,” Womack says. But in this case, he adds, “I don’t think it’s super dangerous.”

Still, Womack suspects that the bigger threat is buried beneath the surface. “Radiation is sexy, but the real danger is the chemical contamination,” he says. Chemical contaminants such as polychlorinated biphenyls, which the Park Service detected at Dead Horse Bay as well, are “real bad stuff,” Womack says. Those chemicals are long-lasting and hydrophobic, and don’t break down in water. “As long as everything sits, it’s stable, but when people start digging, they stir stuff up,” Womack says. The chemicals can slosh onto clothes—and if someone isn’t wearing proper protective gear, they can impact the neurological and endocrine systems, and more.

It’s not yet clear what will happen to the garbage on the beach—the Park Service hasn’t replied to questions about plans for the debris—but it still has many stories to tell. Howard Warren, a retired New York City teacher, spent more than 30 years leading field trips to Dead Horse Bay. At first, his students studied the area’s ecology, sampling water to look at the pH, temperature, salinity, and more, and seined for crabs, isopods, and other critters. In 1989, Warren saw shards of dinnerware, bits of old plastic toys, newspapers, bottles, and other artifacts on the beach, so he began periodically bringing his fourth-grade students and their chaperones to comb the shore (without digging, out of wariness of broken glass). Warren’s students obtained unusual permission to carry a few objects out with them, which became the basis of a curriculum about historical research. “We used encyclopedia, old magazines, books on factory back stamps, antique pottery books, glass pattern books,” Warren writes in an email. “We were specifically looking for things that captured student imagination. The artifacts were so valuable because the students became invested in their research projects.” Plucked from a landfill, the objects wound up tucked in a makeshift museum in the school’s hallway.

Once the trash was dumped in the landfill, that was supposed to be that. That’s the case in other landfills today: After the stuff is sealed up, it’s a time capsule that’s never intended to be opened. “It’s kind of ironic because, if this landfill had been capped properly, the trash would have stayed underground forever,” Sicherman says. “It’s not supposed to be coming out of the top and being studied by historians and archaeologists and stuff.” But there it is, offering insight into 20th-century habits by showcasing the debris of daily life. Sicherman would be sad to see it all disappear again. “I’m worried that they’re just going to pick everything up off the beach and dispose of it in some way without any record being kept of it,” she says.

She plans to send a letter to the Park Service and the Environmental Protection Agency to make the case for the objects’ value as historical artifacts and inspiration to local artists, and to encourage the agencies to consult with conservators, historians, and archaeologists about how to save a representative sample of the trash, safely interact with it, and possibly store it somewhere where it would be accessible to researchers or even the general public. “It’s such a unique place,” Sicherman says. “For it to just go out with a whimper and that be the end of it … that would be really sad.”

The free how-to dispels myths and minimizes the hazards of hunting and hoarding these special specimens.
garbage

More than a year into the pandemic, scientists are seeing the impact of disposable gloves and masks on ecosystems.
national parks

It may take years—even decades—to fully understand the impact of disposable masks and gloves on the environment.
Video • PinDrop