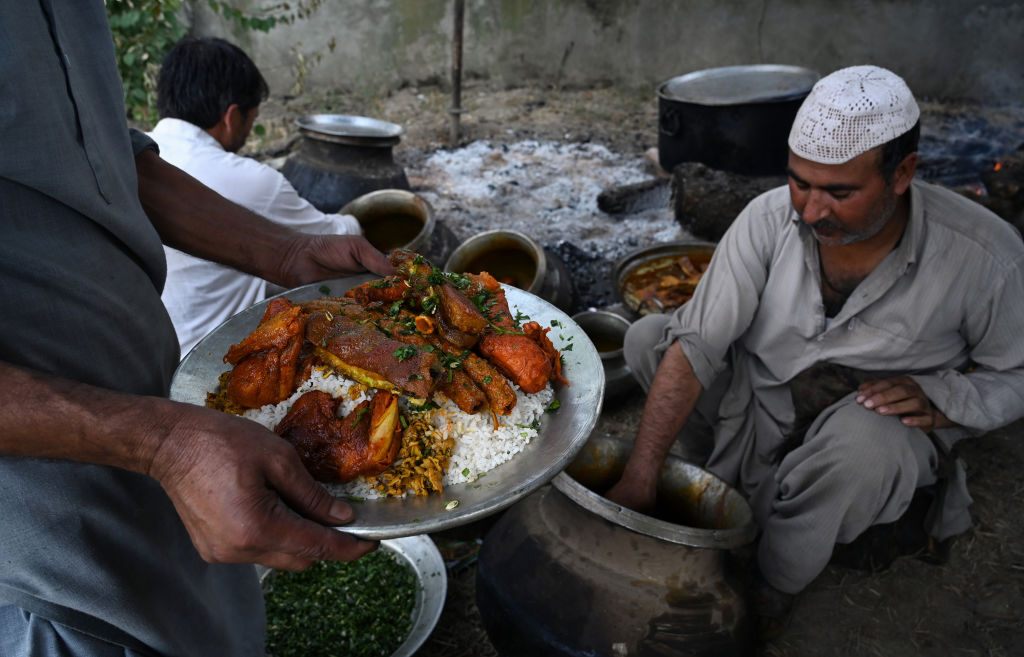 Wazas are chefs whose craft is passed down through family lines. Tauseef Mustafa/Getty Images

For several decades, 70-year-old Asadullah Khan’s life has revolved around preparing a Kashmiri delicacy: the meal known as wazwan. Khan, a resident of Srinagar in Kashmir, learned his skills from his father as an adolescent. He had no choice. Khan belongs to a family as famed for their cooking as for their notorious moniker: the Shaitan waz’e, or “the devil chefs.”

The family picked up this nickname nearly a century ago, during the term of Ghulam Mohammad Bakshi, the Prime Minister of the State of Jammu and Kashmir. Khan’s ancestors cooked for the Bakshi family. One day, “there was a special function at the Bakshi residence and my great-grandfather was asked to prepare some unique dishes,” Khan says.

After the meal was over, a guest asked Bakshi if he could meet the waza, or chef, responsible for the supernaturally delicious meal he had just enjoyed. Bakshi then introduced the guest to Khan’s great-grandfather.

The guest, blown away by the chef’s skills and immense culinary knowledge, exclaimed that he must be a shaitan, a devil. The name stuck, and with it came a certain reputation for nigh-magical cooking. Throughout his life, Khan has narrated this incident to hundreds of people. “The story, like our skills, has been passed down to us through generations and we need to keep them both alive,” he says.

Khan himself is a fifth-generation waza dedicated to the art of wazwan. Wazwan is the pride of Kashmiri cuisine. Organized for events such as marriages and festivals, this elaborate, multi-course meal almost entirely consists of dishes made from sheep, and lamb mutton.

Wazwan can consist of as many as 36 dishes, but some are especially relished. There’s tabakh maaz—ribs boiled with salt and garlic, then chopped into pieces and fried crispy brown. Rista, where meat is pounded, shaped into meatballs, and cooked in mutton stock. There’s rogan josh, where chunks of meat are steam-cooked in gravy, and aabgosh, large chunks of lamb slow cooked in milk and ghee. The very last dish served in wazwan is goshtab: mutton cooked in yogurt, ghee, mutton stock, spices, and garnished with dried mint.

For serving, cooks place the meat over a layer of rice on a large copper platter, which is big enough for four people to enjoy at once. The wazwan can only be prepared by wazas, who cook dozens of dishes to serve hundreds of people at a time.

Wazwan itself has Persian roots. According to Khan, Islamic preacher Shah Hamdan brought the feasting style to Kashmir in the 18th century, where it became famous during the centuries of Mughal rule. The Mughals brought their own chefs from Persia, and one such chef married a local woman and settled down. (Khan belongs to the same clan.) The original Persian wazwan had a total of 53 dishes, but in Kashmir, the meaty main course generally ranges from seven to 36, Khan says.

It takes a team of six chefs about 16 hours to cook 200 pounds of mutton. Their tasks range from mincing the mutton until the right texture is achieved, ensuring the chops are all cut uniformly, cooking the dishes, and serving the feast.

Each head chef supervises a flock of workers, of varying seniority, just as in commercial kitchen. But instead of an indoor chrome-lined kitchen, wazas cook on wood fires in the courtyards of their clients.

Mohammad Ismail Bhat, a resident of Srinagar’s Sanat Nagar area, had planned to invite 700 people to the marriage ceremony of his daughter in May 2021. However, the family was forced to invite only close family members due to the second wave of the Covid-19 crisis in the country.

Bhat believes that marriage ceremonies are incomplete without a crew of wazas cooking up wazwan. However, the restrictions turned out to be a mixed blessing. ”Our business had taken successive major blows in the past two years,” he explains. “The traditional wazwan feast for 700 people would have cost us $4,000 to $5,000 but we were able to save that money as we could not invite more people.”

Despite the astronomical cost, these catered meals are always the main event of any Kashmiri wedding. In many cases, the date of the ceremony is only set after consulting the wazas about their availability on that particular day. If the wazas are not available, the marriage is often postponed.

But the Covid-19 pandemic has turned these elaborate ceremonies into shorter and more intimate affairs. Khan says that this change did not have a huge impact on his family. But it affected the workers working under him. “We hardly required any manpower during this period and managed everything on our own,” says Khan. “This is why the junior wazas earlier employed by us on a daily wage basis suffered the most. There was no work left for them.”

This stung, because the Khan family’s contribution to their community extends beyond mere training. Throughout history, wazas in Kashmir were often considered illiterate by the general public, and faced stigma due to their low caste status. The Khan family has managed to change that perception, by requiring everyone in the family to complete their education before joining the business and encouraging their employees to do the same.

Asadullah’s nephew, Mushtaq Ahmed Khan, completed his postgraduate degree in business administration from a Delhi college. Yet Ahmed chose to return to the Kashmir Valley. His family objected, but Mushtaq was insistent that he did not want a corporate job. For him, joining the ancestral business meant a lot more.

“After working for a few years in different companies, I was not happy. It took me some time to convince my elders that there is nothing wrong with joining our family business. My father allowed me to join and learn the trade only when he realized that I would not give up,” says the 44-year-old, who heads a team of 45 wazas. Now, he is known as Mushtaq Shaitan.

Despite the next generation stepping forward, the future still seems murky. Though the Valley has always been mired in conflict, nothing had prepared the wazas for the current scenario.

In 2019, the Indian government revoked much of Kashmir’s autonomy, then instituted a months-long communication and media blackout. Along with the restrictions imposed to curb the spread of Covid-19, the overall economy of Jammu and Kashmir took a hit. The waza community, too, wasn’t spared. “Our earnings were cut below half,” says Ahmed. “It was a situation where we were just thinking about earning a living.”

Although Ahmed started to deliver wazwan to his regular customers, it was not an easy transition. “One of the most important components of wazwan is cooking in an open courtyard and serving it hot. This cannot be replaced by any other means. Wazwan is a feeling that binds us to our culture, and customers miss this,” he says.

But Ahmed believes that the situation will improve. One day, he says, his team of wazas will again cook in the courtyards of clients and serve wazwan to wedding parties, just as his forefathers have done for generations before him.

The Fashion Photographer Who Became a Monastery Chef

A food designer used quarantine to track down the mystery produce in his grandmother's cookbook.
Video • Wonder From Home