This Royal Coach Is Forcing a Reckoning With Racism - Atlas Obscura
Want to see fewer ads? Become a Member. 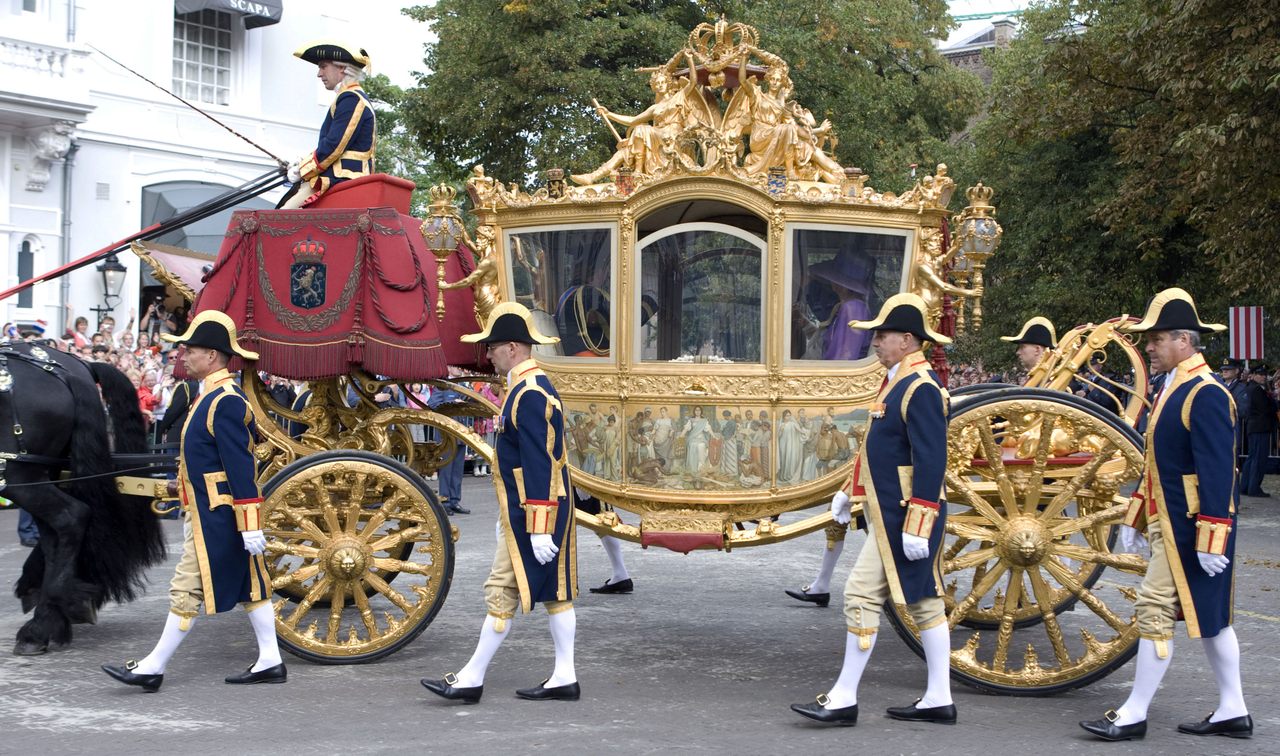 The Golden Coach, pictured here moving through The Hague, has inspired conversations about what to do with artifacts of the colonial era. Julian Parker/UK Press via Getty Images
In This Story
Destination Guide

One of the vehicles that will pull up to the Amsterdam Museum in June 2021 will be empty. Known as the Golden Coach, it is out of commission and lavishly adorned. The exterior features gilded female figures representing agriculture, trade, industry, and shipping—the sectors of the Dutch economy. The ornate wheel covers depict suns, cherubs, water lilies, birds, and a scepter, crown, and sword. Inside, the coach is covered in silk, embroidered with flowers and the crests of the Dutch provinces.

It’s a vehicle befitting a queen, and was once a royal chariot. A gift from the citizens of Amsterdam to Queen Wilhelmina, who ascended to the Dutch throne in the late 19th century and reigned for more than five decades, the Golden Coach has since been used for several royal weddings, including the most recent one, in 2002, when then-crown-prince and incumbent king Willem-Alexander wed Máxima Zorreguieta Cerruti. It has also often wound through The Hague in September, on the first day of the parliamentary year. Departing from their working palace, and cheered on by thousands, the king and queen have made their way to the Knights’ Hall, where the king lays out the government’s plans and budget for the coming year. The last such trip was in 2015, because the Coach needed a renovation: The upholstery had grown old and pale, and the wooden parts, covered with gold leaf, had started to rot. The freshening up will take place in the Royal Stables in The Hague, carried out by a team of experts paid from the king’s budget. When the restoration is complete, the vehicle will be transported to Amsterdam and hoisted into the museum’s courtyard. It will likely remain an exhibition piece, in one collection or another. Beyond grandeur, something else will also be on display: an increasingly debated symbol of Dutch colonialism.

Mainstream debate about the Coach’s symbolism kicked off 10 years ago, with a piece in a Dutch daily. The four writers (two Members of Parliament, a Dutch-Surinamese politician and chair of a platform about Dutch slavery history, and an Indonesian-Dutch activist who chairs a committee for financial reparations) called for removing one of the paintings on the side of the vehicle. Called “Tribute From the Colonies,” the painting depicts a white woman on a throne—an allegorical representation of the empire—surrounded by half-dressed Black people bowing and offering her gifts. Meanwhile, a white man offers a book to a Black boy. “It depicts both colonial power and the so-called ‘white man’s burden,’” says cultural historian Nancy Jouwe. In the era of Dutch colonialism, officials considered “educating” and “civilizing” the native people in lands claimed by the Dutch to be part of their duty. The authors described the painted scene as a “reminder of a gruesome period in Dutch history.” In the wake of the article, the Dutch royals remained mum on the issue.

“The perception of the coach has shifted fast since then,” says Jouwe. She is a daughter of a leader in the Free Papua Movement, an independence effort of West Papua, on the western portion of the island of New Guinea. Several members of her family fled the former Dutch territory, now under Indonesian rule (or, as many activists see it, occupation), for the Netherlands in the 1960s. When the article came out in 2011, Jouwe’s focus was mainly Papuan heritage and cultural heritage in museums. She welcomed the beginning of a frank conversation about the Dutch context. “I had been speaking out on the vices of Dutch colonial history for many years, but only in this decade has a more critical and self-reflective anti-colonial view become more mainstream,” she says. “As a society, we are learning to look at what we see.”

In the Netherlands, the 17th century—the period when the Dutch East India Company began flexing its muscle—is still widely known as the ‘Golden Age.’ It’s an era in which the country gained power through enslaving people and exploiting colonized lands. The vehicle is designed in a style that hearkens back to centuries past, and could be read as an homage to the period of plunder: Some of the raw materials used for the coach were drawn from the colonies, including teak wood and ivory from the Indonesian islands of Java and Sumatra.

Recently, several museums in the Netherlands have begun rethinking the way they depict Dutch colonialism. For instance, some wall texts and visitor guides now describe people as enslaved, rather than as “slaves.” Other museums have foregrounded the stories of Black people. In 2020, the Rembrandt House Museum presented an exhibition called Black in Rembrandt’s Time, showcasing 17th-century depictions of Amsterdam’s Black residents, some of whom were sailors. In 2021, the Rijksmuseum will mount a show telling the story of slavery in the Dutch colonial era through 10 thoughtful, personal tales spanning the 17th through 19th centuries. But the debate over how to grapple with colonialism far from settled: There are still many in the country who believe that there’s no need to wrestle with the past, because those in power felt that colonialism was acceptable at the time.

Jouwe believes the Amsterdam Museum’s display could help contextualize the coach’s violent legacy. The key is breaking the link between the vehicle and the power it represents, she says. “We have to acknowledge that we as a society still have a colonial gaze when we look at our history. We have to unlearn that view.”

The Amsterdam Museum will install an exhibition in the halls surrounding the 3,500-square-foot courtyard, which currently displays photographs about women in Amsterdam as well as the city’s recent Black Lives Matter protests. The halls will explain and contextualize various facets of the coach, while the windows will offer a view of the vehicle. Dozens of experts, including historians, activists, artists, and anthropologists, are collaborating on the display. “The exhibition will tell a polyphonic tale when it comes to the meaning of all the panels (paintings),” and the views depicted therein, says Kim Koopman, an Amsterdam Museum spokesperson. “Contemporary artists will reflect on a variety of themes.”

The vehicle, which measures roughly 18 feet long and 7.5 feet wide, might look insignificant in the large courtyard. To Jouwe, that sounds just fine. “We need to think of a way not to reproduce the power the Golden Coach stands for, but rid it of its power,” she says. She suggests placing it off to the side or in a corner—the less imposing, the better.

More than 200 enslaved people perished when the Portuguese ship sank in 1794.
museums

These 72 images are a rare glimpse of an ancient city lost to time and conflict.
objects of intrigue

It is said the English monarch wore the sleeved waistcoat at his public execution in 1649.
ethnographic

For centuries, the Caribbean island's tradition has been a symbol of resistance, healing, and empowerment.
Video • PinDrop