The WWII Plan to Mess With the Japanese by Dyeing Mt. Fuji - Atlas Obscura
Want to see fewer ads? Become a Member. 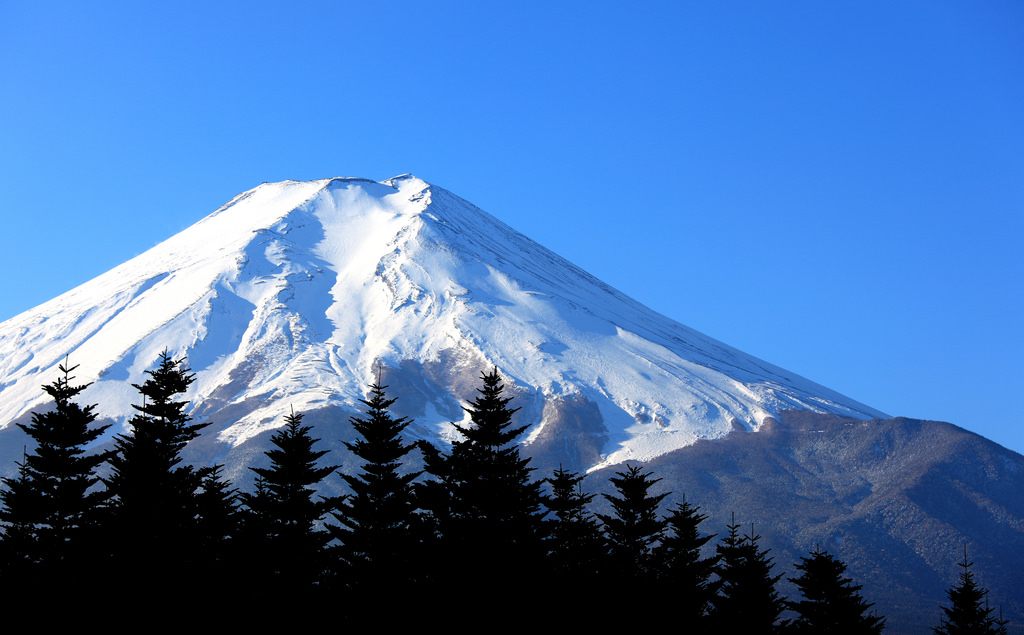 Mount Fuji in its natural, non-dyed state. TANAKA Juuyoh (田中十洋)/CC BY 2.0
In This Story
Destination Guide

In the waning months of World War II, as the likelihood of a land invasion of the Japanese home islands loomed, the United States’ Joint Intelligence Center, Pacific Ocean Areas (JICPOA) instituted a new psychological warfare unit under the command of Colonel Dana Johnston.

While psychological warfare—propaganda broadcasts, leaflet drops and the like designed to demoralize enemy soldiers and civilian populations—played an important role in the war effort, the occasional head-scratcher of an idea emerged from the murky world of “psy-ops.” In the case of JICPOA’s newly-formed psychological warfare unit, perhaps the most audacious—if not quirky—campaign considered was a mission to dye the revered Mt. Fuji as a psychological blow against the Japanese.

Aside from serving as an unmistakable point-of-reference for American bomber crews, Japan’s iconic Mt. Fuji was frequently invoked in both Allied and Japanese propaganda efforts. An ingrained symbol of Japanese culture with deep spiritual and historical meaning, the image of Fujiyama was seen as a potent tool by propagandists. As Dr. David Fedman, an expert on late-WWII bombing campaigns against Japan at UC Irvine notes, Mt. Fuji was “cast [by the Japanese] as an alpine feature that bound the swelling imperial sphere together … the sacred epicenter of the Greater East Asia Co-Prosperity Sphere.” Leaflets dropped on the battlefield and the Japanese home islands by the Allies commonly featured renderings of the famed peak—often alongside ominous images of American B-29 bombers—with messages designed to appeal to soldiers’ and civilians’ sense of nostalgia, duty, home and family.

That Mt. Fuji would then become a physical target of Allied psy-ops is not surprising. As detailed in a declassified 1945 memo from Col. Johnston to JICPOA’s commanding officer, General Joseph Twitty, the proposed operation would “give Fujiyama with some color other than that seasonably endowed by nature.” In other words, the plan called for the marshaling of considerable manpower and equipment to dye Mt. Fuji black.

The idea may seem preposterous, but the approach was standard. Dr. Fedman points out that JICPOA embraced a culture of creativity and officers were encouraged to share proposals—“no matter how ludicrous”—that never left the planning stage. In the case of Mt. Fuji, Col. Johnston dutifully explained to General Twitty in his memo that the proposed action would ultimately prove impractical, ineffective and even counter-productive.

Largely covered in snow from October through June, the 12,365-foot peak, Col. Johnston noted, would require frequent missions to re-dye its 370-square-mile surface after each snowfall. Moreover, persistent cloud cover shrouding Mt. Fuji in colder months would limit the visual impact to those in the immediate vicinity of the mountain. While Col. Johnston noted that local “superstitious farmers” might experience a psychological shock at waking up to a newly dyed Mt. Fuji, the broader population would remain unaware of the change.

Col. Johnston further posited that even if successful in the face of logistical hurdles, such an operation might unintentionally provide Japanese propagandists with ammunition of their own. Indeed, Johnston’s memo theorizes that the Japanese government could seize upon the action as an “inhuman act of the beastly enemy.” Not to mention the propaganda value in declaring the proposed action a desecration of a national shrine, “which, in fact,” Col. Johnston conceded parenthetically, “It is.”

Ultimately, the ambitious plan came to naught. It was recommended to General Twitty that JICPOA instead stick with tried and true campaigns of simply dropping leaflets over civilian populations on the home island; invoking Mt. Fuji on paper being the better tactic than physically altering the peak. Aside from sparking an enduring internet urban legend in the early 2000s of an Office of Strategic Services plot to paint the iconic mountain bright red using 30,000 planes and 12 tons of paint, the proposed campaign against Mt. Fuji remains a quaint historical footnote from the closing months of World War II.

Found: Fossil Evidence of the Oldest Life on Earth

7:32
Want to see fewer ads? Become a Member.
From Around the Web
Atlas Obscura Trips
Artisans & Exiles: Exploring the Hidden Traditions of Japan’s Sado Island
View This Trip
Thanks for sharing!