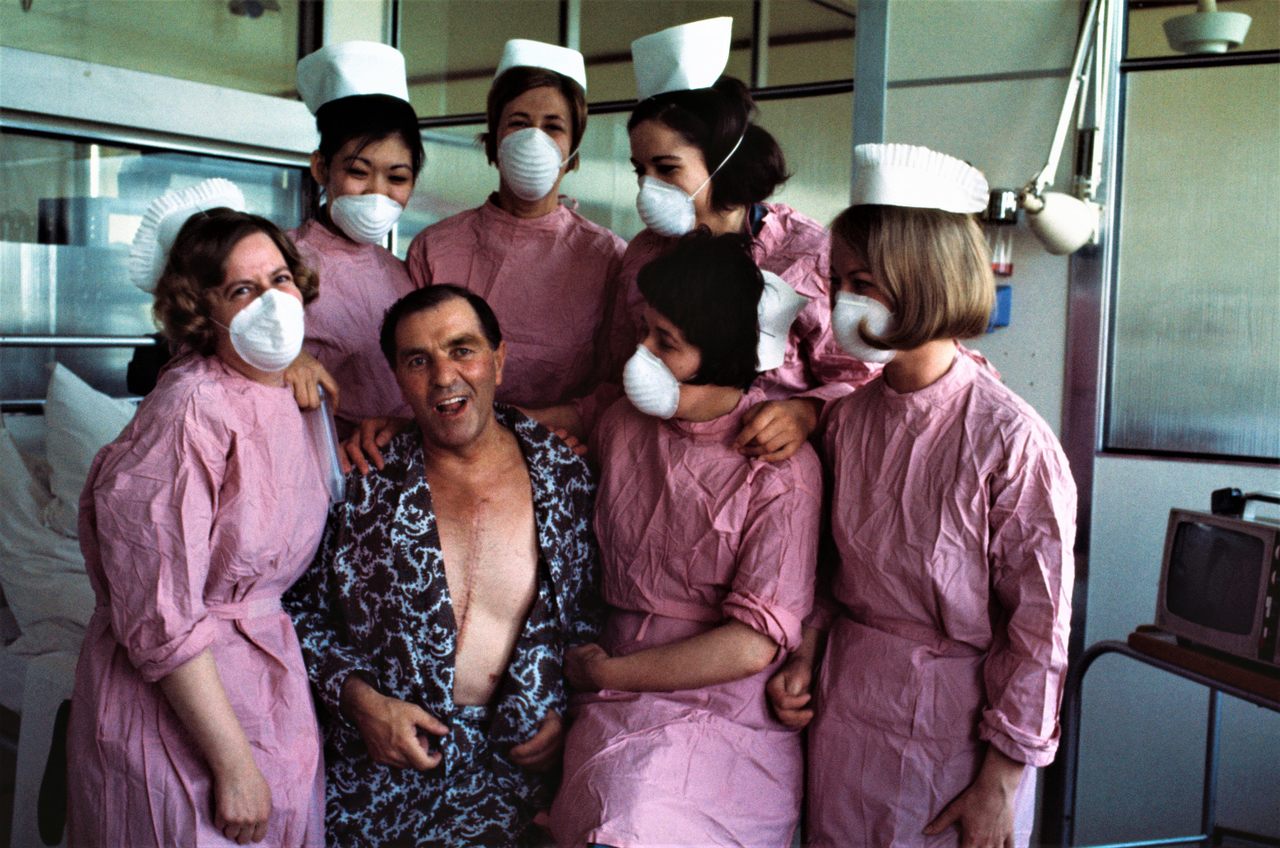 The nurses, clad in pink, crowd around the man on the hospital bed. Posing, their bodies are pressed against his. Even though you can’t see their mouths through their face masks, you can tell from the crinkle of their eyes that they are smiling, grinning even. The man looks jovial, his head tilted to the side and his mouth open as if he were shouting a greeting or something funny for the camera. He’s middle-aged, and his chest is bared through a noisily patterned bathrobe, all the better to show off the dramatic incision that bisects his body, held together with stitches.

The nurses are so adoring, the man could be a movie star. He is a celebrity, but not for the usual reasons: In 1968, during a seven-hour surgery throughout which the medical team listened to pop-music, Frederick West became Britain’s first heart transplant recipient. The picture is one of many images that subsequently flooded the media to sate the curiosity of a transfixed public.

Just five months before, on December 3, 1967, the South African surgeon Christiaan Barnard transplanted the heart of a 25-year-old car accident victim into the chest of 55-year-old Louis Washkansky, a grocer suffering from congestive heart failure. Washkansky lived only 18 days after the procedure, but Barnard’s feat nonetheless kicked off what the media dubbed “The Year of the Heart Transplant”. In 1968, as Vietnam, protests, and space exploration claimed headlines, so did the over 100 heart transplant surgeries that took place around the globe. The world looked on in awe, at times enthralled or appalled at the revolutionary surgery, and the media and medical world obliged their fascination by serving up breathless, constant coverage.

Prior to the reality of transplantation in the hospital, the general public was offered images of transplantation by Hollywood via such medical horrors as 1940’s Black Friday, in which Boris Karloff plays a doctor who endeavors to save a critically injured friend by replacing part of his brain with that of a dead gangster’s. His friend survives, but is embedded with the criminal’s personality. This kicked off decades of U.S. horror flicks depicting the dangers of brain, face, and even skin transplants. In 1969, on the heels of the Year of the Heart Transplant, Mexican audiences were treated to La Horripilante Bestia Humana (The Horrible Man-Beast) about a man implanted with the heart of gorilla who goes on a killing spree. Suffice to say, fear and fascination swirled around the idea of replacing one’s organs with a stranger’s.

West, a 45-year-old married building contractor, had the distinction of receiving his transplant not only during the Year of the Transplant, but during what the media was reporting as the busiest week of heart transplants ever. In London, as West was receiving the heart of a 26-year-old construction worker who had fallen to his death, two other men were being implanted with new hearts in the United States. They were: Joseph Rizor, a 40-year-old carpenter from Salinas, California who would be given the heart of a 43-year-old man who had died of a brain hemorrhage; and Everett C. Thomas, a 47-year-old Phoenix accountant who would receive the heart of a 15-year-old female who died of an accidental gunshot. All three surgeries would be reported on nearly daily, with doctors and hospitals frequently updating the press.

West’s operation was an object of national obsession in Britain, and it kicked off an unprecedented relationship between the media and the medical world, as historian Ayesha Nathoo meticulously chronicled in her book Hearts Exposed: Transplants and the Media in 1960s Britain. Photographers and reporters mobbed the hospital; one member of the operation team described a street clogged with arc lights and so many people “the whole thing looked like a royal wedding being watched”.

The hospital went to extraordinary lengths to accommodate the press. They held a hastily assembled press conference where attendees fought and shoved each other, and reporters were admitted into their halls. “As West was recovering,” wrote Nathoo, “photographers and film crews were allowed right inside the hospital space, turning the patient ward into a television studio and bringing the hospital world into public view.” In addition to posing with smiling nurses, West was photographed winking for the camera and even filmed playing chess.

On May 5, United Press International reported that West had given a “weak thumbs up” following his surgery. Meanwhile, Riznor’s lungs were “confused” by his “borrowed heart” and, once his respirator was removed, Thomas was able to talk with his wife. That same day, the National Heart Hospital told the Associated Press that West lay upon a “sterile shrine”. West’s surgeon, Dr. Donald Ross*, defended the surgery against critics as “morally correct and morally acceptable”, stating that the only alternative for West was death. The same AP article related the strange anecdote of Thomas’ first post-surgery moments. He wrote a note to his wife asking her if he had a new heart or if his own heart had been repaired. She informed him that he now had the heart of young girl.

Survival for early heart transplant recipients was far from guaranteed; many died within months, or even hours, of operation. This was the sad fate of Rizor, who died just four days after his surgery at Stanford University Medical Center. But West and Thomas persevered, and their stories were celebrated. On May 29, the Los Angeles Times ran a photo of West (in the same noisy bathrobe) wearing a doctor’s stethoscope and gazing down at his chest as he performed the strange act of listening to his own, brand-new heart. Thomas modeled for publicity photos in which the sports fan donned a helmet and posed as if about to toss a football. When he returned to work, the media snapped shots of him sitting behind a desk and talking on the phone. He was photographed on a fishing trip with his wife and two sons.

The press transformed doctors into celebrities, too, especially Barnard, who had performed the fateful 1967 surgery in Cape Town. It helped that Barnard was photogenic; young and slim, with dark, straight hair and a toothy smile, he was dubbed “The Film Star Surgeon”. He made television appearances and was photographed vacationing, posing in speedboats and strolling down a frothy beachfront with his bikini-ed wife.

He graced the cover of Time and Paris Match. On May 7, Barnard paid a visit to West at the National Heart Hospital. He was greeted by a churning crush of reporters and cameramen. In a photo of the event, it is hard to pick Barnard’s face out the crowd; today it’s a media scrum more suited for Britney Spears than a doctor.

Sadly, like many of the patients before them, West and Everett did not live long. West died of a massive infection six weeks after his operation; he never went home. Everett, the banker who had returned to work and embarked on fishing trips with his family, lived 205 days—longer than any other U.S. heart transplant patient at that time—before dying two days after receiving a second heart transplant. Their deaths, of course, were noted by the press.

Following The Year of the Transplant, the number of surgeries plunged. In 1970, only 18 were performed. Of the patients operated on around the world in 1968, two thirds perished within months, days or hours. In Britain, heart transplantation was abandoned at the end of 1969 for a decade. The crush of media coverage was not without consequences. Nathoo argued in her book that the press “was central to bringing about the moratorium.” Experts and pundits debated the effectiveness and ethics of heart transplant surgery in every medium; the public became increasingly leery of the surgery, wondering if donors were truly “dead” when their hearts were removed. The number of willing donors plummeted.

Today, scientific advancements (and savvier public relations) have transformed the public perception of transplant surgery. Over 5,000 heart transplants take place around the world annually. Nearly 85 percent of those patients will live at least one year with their new heart, with survival rates dropping about three to four percent every year after.

Posing in his bathrobe, West would never know the complicated legacy of his glamour shot, nor would he ever know another Englishman, John McCafferty, to whom his own life is indelibly linked. In 1982, McCafferty would receive a heart transplant and go on to live 33 more years, earning a Guinness World Record as the longest living heart transplant patient to date.

*CORRECTION: The original version of this story incorrectly referred to West’s surgeon as Dr. Ronald Ross. He is Dr. Donald Ross.

My quest to buy (and eat) as many different hearts as I could in a single day in the city.
music

The Surprisingly Stubborn Theory That Beethoven's Heartbeat Influenced His Music

For decades, doctors have been trying to use a few sonatas to diagnose the composer with cardiac arrhythmia.
Video