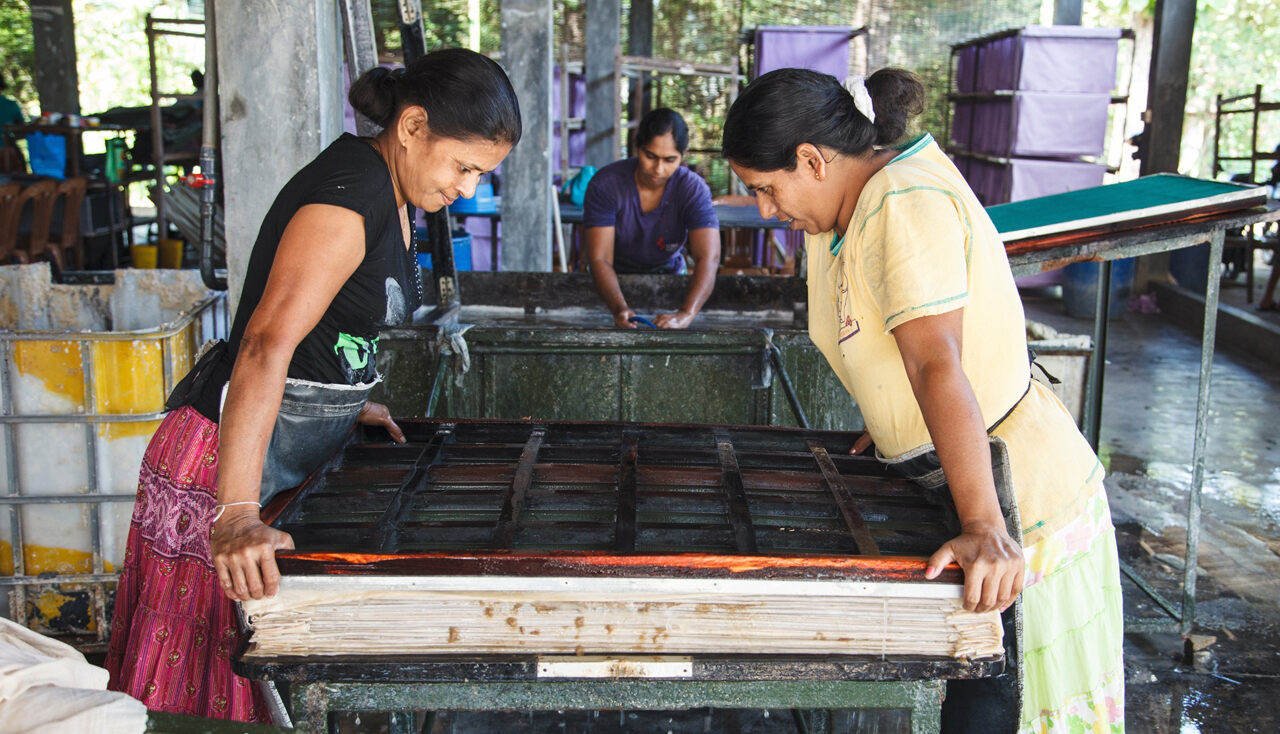 Grown-up elephants can eat more than 300 pounds of food—mostly grass, twigs, foliage, and tree bark—in a single day. In the same period, they may defecate 16 to 18 times, producing over 200 pounds of dung. In Randeniya, a small village in the lower wetlands of Sri Lanka, elephant poop is a renewable resource. The sun-dried, deep-brown dung piles up like haystacks in a painting by Claude Monet.

Visitors could be forgiven for thinking that the poop is useless. But at Eco Maximus, a manufacturer in Randeniya, it takes on a second life. More than 20 years ago, a man named Thusita Ranasinghe saw some dung and had an idea. “He thought he could make paper from it,” says the company’s brand designer, Susantha Karunarathne, with a smile. At his office inside the company factory, Karunarathne wears a green t-shirt which says #elephantdungpaper and shows off some of his recent journal designs.

On a table nearby, a several women carefully design covers for multi-sized notebooks. On another, the finished product is packed and ready to be shipped. Today, Maximus creates a range of stationery and souvenirs, which are sold in the local market and in 30 other countries around the globe.

Eco Maximus was an early producer of elephant dung paper, and the first in Sri Lanka, and refining the manufacturing process involved a lot of trial and error. Elephant dung is brought in by nearby rescue centers, Karunarathne says during a tour of the factory. Fresh elephant dung, semi-solid and green in color, smells. But after it dries under the hot tropical sun, the smell disappears. Collectors gather the deep-brown, fiber-rich piles in a piping-hot steam boiler. “We boil for one hour, to ensure that the dung is germ-free,” says Vibhatha Wijeratne, the factory manager, wearing a pair of yellow gloves as he shows me a pile of boiled dung.

In one corner of the factory, bundles of paper with crumpled edges are stacked upon each other. There are different colors—earthy tones, blues, tropical greens, and deep reds. Thousands of years ago, much of the writing in Sri Lanka was inscribed on stones. Later, the islanders wrote on leaves, such as the fronds of the palmyrah palm, locally known as the tal. “Palmyrah leaves were boiled and sun-dried for writing, which was called pus kola (old leaves),” says bright-eyed Randika Jayasinghe, who teaches biosystems technology at the University of Sri Jayewardenepura.

Conventional papermaking began after Sri Lanka was colonized by the Portuguese, the Dutch, and then the British, who referred to the island as Ceylon. Most paper uses wood pulp as the main material, which is fibrous and rich in lignin and cellulose. “It is prepared by chemically and mechanically separating fibers from wood,” Jayasinghe says. “These chemicals are then released as wastewater.” The problem is that nearly 4 billion trees are cut down every year to manufacture paper. Some are farmed, but others are logged from managed and old-growth forests. “Since paper is biodegradable, we consider it to be eco-friendly compared to plastics,” Jayasinghe says. But it comes at a significant environmental cost.

After the British left Sri Lanka in 1948, the local government opened 12 factories in the 1960s to utilize waste straw from rice paddies for papermaking. But by 1993, only two of them remained. One of them was managed by Shirani Fairbanks. “I walked into the Export Development Board in Colombo, and by accident, I saw a sheet of paper made from banana fiber,” says curly-haired Fairbanks, collecting a bundle of vibrant wrapping paper from her office table. “It inspired me to start Trickledown.” Her company eventually moved beyond conventional papermaking, when they began using waste material—tea refuse, banana skins, pineapple fiber—to make paper. “There’s a huge demand for elephant dung paper products in the market,” Fairbanks tells me. They have a unique aesthetic appeal, which many young people love.” The company now sources paper from manufacturers around the country for their stationery, crafts and other products. One of them is Eco Maximus.

Back at the Eco Maximus factory, Wijeratne, the manager, shows off a 1000-liter cement tank known as the beater. A rubber hose pipes water into the tank from a nearby tap, and an employee uses his bare hands to toss in steam-boiled dung, which now resembles a yarn ball made out of earthy fibers. “This is the pulp we use for inner pages of notebooks,” Wijeratne says. “One-third of this pulp is elephant dung, while two-thirds of it is offcut.” Offcut is two things: leftover paper brought from warehouses in Colombo, and remains from Eco Maximus paper that has been leveled and cut into desired sizes. Finally, bucket of deep magenta liquid is added to the mixture. (Eco Maximus also makes paper from elephant dung alone, but its fibrous texture makes it unsuitable for writing or drawing.)

In one of the last steps of papermaking, a woman pours a jug of pulp onto a thin metal mesh. The mesh is dipped in water, and she uses her fingers to mix the pulp for a few seconds, leveling it on the mesh while the water trickles down. “This is for 150 GSM writing paper,” Wijeratne tells me, using the industry acronym for “grams per square meter.” (Printer paper is usually less than 100 GSM, while business cards can be as high as 400 GSM.) Two women hold the mesh up and press it onto a slightly larger cotton fabric, which is laid flat on a table by a third woman. She then folds the fabric edges in and seals it, which creates a fabric-pulp sheet. Smiling and chatting, they soon make a pile of sheets.

“We use this machine to compress the water out,” says Karunaratne, pointing to a large electric machine. A middle-aged man manually controls the machine, which squeezes a bundle of fabric-pulp sheets as water drips down. “Now you can remove the cotton fabric, and let it dry.” Karunarathne takes me to a large section of the factory where colorful papers are neatly racked. Drying takes place under the asbestos roof, as direct sunlight could bleach the blues, tropical greens, earthy tones, and deep reds.

Finally, two cheery ladies stand by a large aluminum sheet iron, which smooths out the creases and rough edges one sheet at a time. “Ironing is the final step of raw papermaking,” says Wijeratne. These paper sheets will be cut, leveled and turned into stationery.

The transformation of poop into paper is complete. Outside, in a neighbor’s garden outside the factory, it is about to start all over again. An elephant marches past, holding a clump of grass beneath his trunk. He leaves a pile of poop before he moves on. “It will be turned into paper tomorrow,” Karunarathne says, and laughs.

How a Guatemalan Town Tackled Its Plastic Problem

In San Pedro La Laguna, single-use items made from plastic and styrofoam are banned.
aviation

It took years of dedication and a few visits to the airplane graveyard.
art

The Artist Who Imagined Zaire as a Miniature Utopia

3:48
Want to see fewer ads? Become a Member.
From Around the Web
Related

This Unusual 1948 PSA Depicts a World Without Paper

Get used to eating rice directly out of your pocket.
Read more
Thanks for sharing!