Eugene Shoemaker Is Still the Only Man Buried on the Moon - Atlas Obscura
Want to see fewer ads? Become a Member. 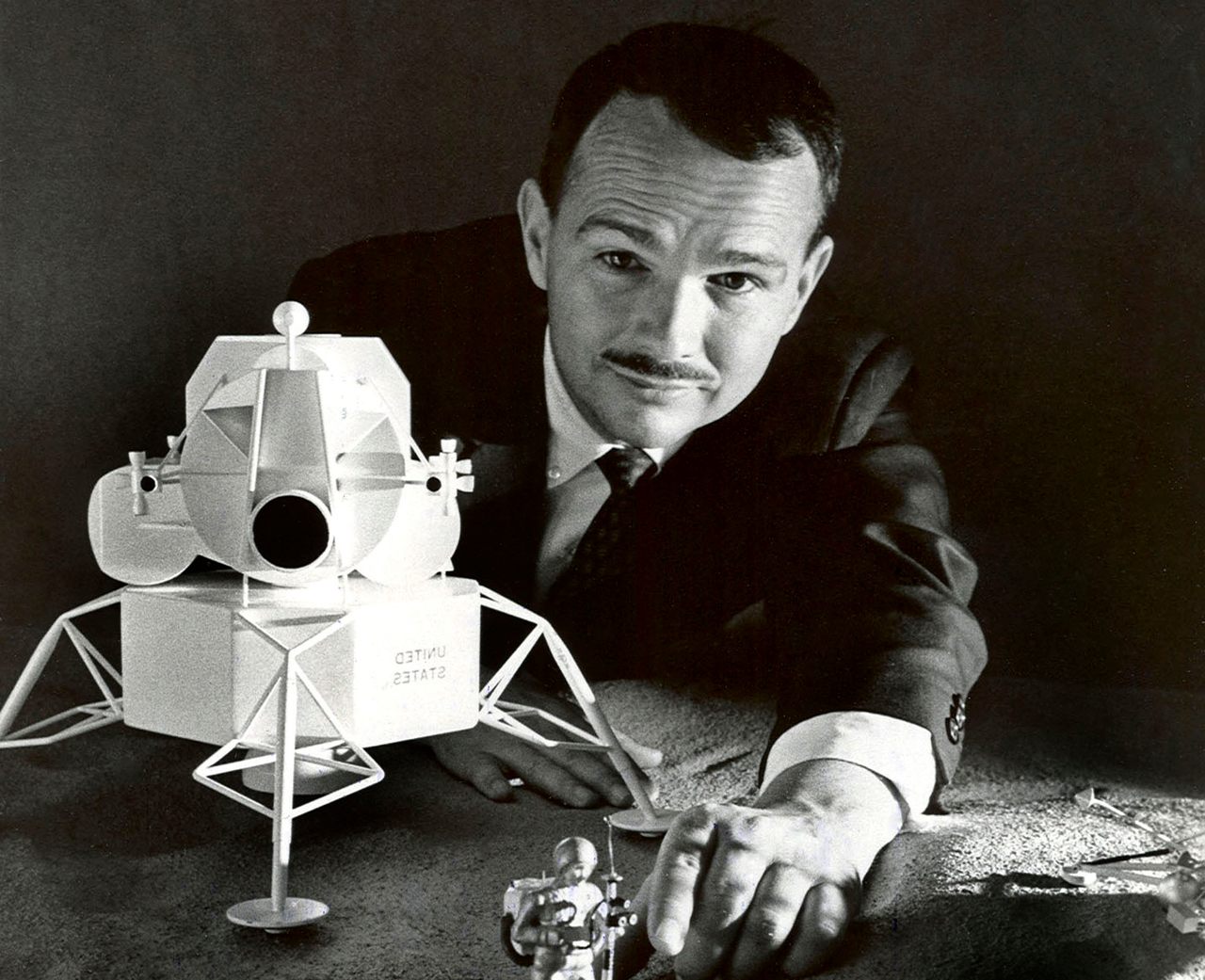 Eugene Shoemaker looking over a lunar lander model of his own making. NASA/Public Domain
In This Story
Place

This UFO landing strip was created by a charitable Wyoming city that was worried about residents of Jupiter.
Place

This 4,000-foot-diameter hole is touted as "the most well known, best preserved meteorite crater on Earth."

Enough human beings have walked on the Moon at this point that it’s almost the “visiting the Empire State Building” of space exploration (that’s 12, if you’re keeping track). But for as many living people who have taken a walk on that far away rock, there is only one dead man who’s ever been put to rest there.

To date, the late scientist Eugene Shoemaker is still the only person whose remains have been sent to the Moon. Even casual stargazers are likely to recognize Shoemaker’s name from the famed Comet Shoemaker-Levy 9 (which had broken into fragments) that impacted Jupiter in 1994. The comet, which Shoemaker discovered with his wife Carolyn, alongside David Levy, was remarkable because it marked the first time humans were able to witness a first-hand planetary collision. The crash got so much press attention that a small town in Wyoming set up an intergalactic landing strip to welcome any potential refugees from Jupiter, and Shoemaker became a household name.

Shoemaker enjoyed a celebrated career combining his main discipline of geology with more astronomical applications, helping to create the field of planetary science. He studied a number of craters here on Earth, and in the early 1960s, he founded the Astrogeology Research Program within the United States Geological Survey. Shoemaker used his knowledge to train a number of Apollo mission astronauts about what they could expect to find on the surface of the Moon, in terms of terrain.

His fascinating life came to an abrupt end on July 18, 1997, when he died in a car crash while exploring a meteor crater in Australia. But even in death, as it turned out, his journey was far from over.

Enter Celestis, the first company to successfully conduct memorial spaceflights. “Our first launch was in April of 1997 out of the Canary Islands,” says Charles Chafer, CEO and cofounder of Celestis. “We flew 24 people on what we call the ‘Founder’s Flight.’ Some well-known folks like Timothy Leary and Gene Roddenberry. Also some space-geek folks, like Gerard K. O’Neill, but mostly normal folks.”

Celestis works by securing any extra room on space launches that are already occurring and sending ashes up as a secondary payload. “I think the term of art these days is ‘rideshare,’” says Chafer. So, if a rocket is set to head into space, and there is a little wiggle room in terms of space and weight, Celestis tries to fill that with remains. Generally, whatever piece of equipment the memorial payload is attached to ends up in Earth’s orbit. “Our payload is always attached to something, whether that’s a spacecraft or a spent rocket stage. Things that are small enough that at the end of their orbital lifetime, they burn up completely on reentry,” says Chafer. “Sort of an ashes-to-ashes moment.”

But with Shoemaker it was a little different. A close colleague of Shoemaker’s, Carolyn Porco, had decided to try to finally get the deceased scientist, who had wanted to be an astronaut in life but was disqualified for medical reasons, to the Moon. Luckily, NASA also liked the idea of honoring Shoemaker by getting his ashes all the way to the lunar surface, and they called Celestis. “I got a phone call. A good friend of mine was the chief of staff and legislative liaison for NASA, Ed Heffernan,” says Chafer.

Heffernan asked Chafer if Celestis could work with them to find a way to get some of Shoemaker’s remains to the Moon’s surface, because NASA wasn’t really in the business of burying people. Chafer was interested of course, but he wanted to make sure that this groundbreaking burial would set a precedent for future off-world memorials. “I said, ‘I want it to be a contract that is purchased from us.’ Now, we charged virtually nothing,” says Chafer. “I think we charged them the cost of the capsule that we sent out to Arizona.” Chafer said the capsule cost around $600.

On January 6, 1998, NASA’s Lunar Prospector blasted off for the south pole of the Moon, looking for ice, and carrying an ounce of Shoemaker’s ashes. According to a memorial website set-up by Porco, the ashes were carried in a polycarbonate capsule provided by Celestis. It had been wrapped in a piece of brass foil, laser-etched with his name and life dates over an image of the Hale-Bopp Comet; an image of Arizona’s Meteor Crater, where he had trained the Apollo astronauts; and a quote from Romeo and Juliet. On July 31, 1999, the mission ended when NASA deliberately crashed the craft on the surface of the moon, taking Shoemaker with it, and making him the first and only person to be buried off-world.

In the years since, a number of other companies have begun to offer the opportunity to send a loved one’s ashes into space–on a suborbital flight or into Earth’s orbit. The competition doesn’t bother Chafer. “If there weren’t competition, I’d be worried about the market,” he says. And the market definitely seems to be there, attracting what he calls “geeks, new agers, adventurers, and people who want the biggest send-off ever.”

And Eugene Shoemaker might not be all alone on the Moon for very much longer. Celestis is planning to send a portion of the remains of 50 people—including those of Mareta West, the NASA lunar geologist who helped to identify the Apollo landing site and Star Trek creator Gene Roddenberry—on Astrobotic’s Peregrine Mission One, currently scheduled to land on the Moon in late 2022.

This story was updated in June 2022 to include current information about space and moon burials.

It's for science, promise.
science

The 20-year-old satellite is still sending back images during its swan dive into the planet's atmosphere.
science

Rest assured, they will come (and go) in peace.
science