Everything We Know About Springfield, Mapped - Atlas Obscura
Want to see fewer ads? Become a Member. 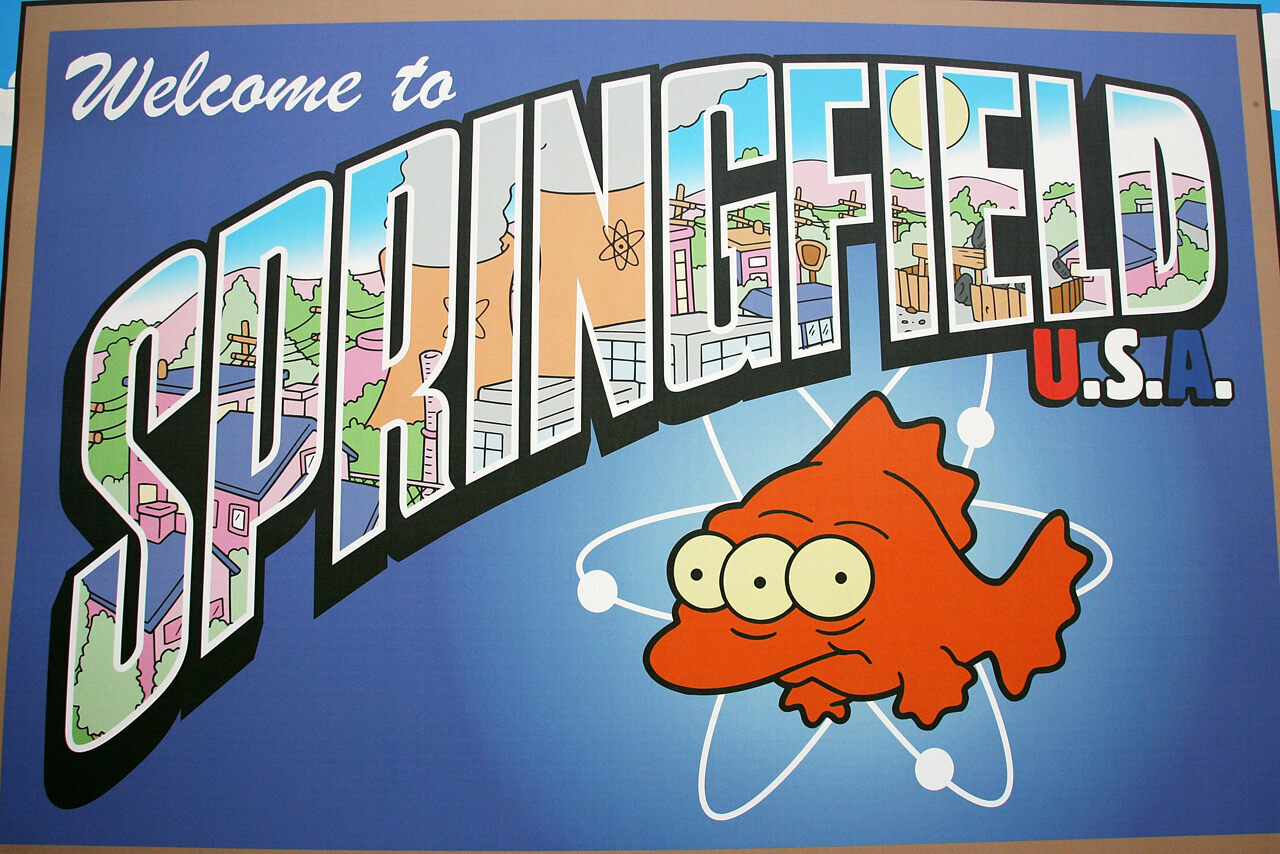 The Springfield town sign is displayed at the UK premiere of "The Simpsons Movie" in 2007. Claire Greenway/Getty Images

From the time The Simpsons first aired on December 17th, 1989, the location of the pop-culture juggernaut’s fictional town, Springfield, has been hotly debated among nerds, dedicated fans and casual viewers alike. While Springfield is supposed to represent a fictionalized version of Anytown, USA, this hasn’t stopped theories from circulating around every corner of the internet. In fact, there’s a whole world of Springfield cartography out there.

Part of what makes this debate so interesting—and so heated—is that the writers of the show adapt the geography of Springfield to fit the gags of particular episodes with a wanton disregard for reality. It begs the question: Where in the world do cactus-studded deserts, oil fields, working harbors, pristine gorges, and a thriving gay community all coexist?

Let’s go to the tape. In the eleventh season episode “Behind the Laughter,” a narrator casually mentions that the Simpsons are just a regular “northern Kentucky family.” However, as soon as the end credits roll, there’s another mention of Springfield’s location in Southern Missouri. In season 13, a lovelorn Homer takes a roughneck job on an oil field in West Springfield, the territory next door to Springfield itself. Worried about her father’s whereabouts, Lisa exclaims, “We’ll never find him there, West Springfield is three times the size of Texas!”

The plot thickens even further. In The Simpsons movie, Ned Flanders—the quintessential annoying neighbor —shows Bart a map of Springfield. Unfortunately for the realist Simpsons fans, the bordering states are Ohio, Kentucky, Maine, and Nevada. While Ohio and Kentucky do border each other, Maine and Nevada could not be further apart. Moreover, in the ninth season, Homer becomes the first person to climb Springfield’s tallest peak (“King of the Hill”)—the Murderhorn. While it is plausible a mountain deserving of this ominous title could be in Nevada, or even Maine, this episode clearly rules out any Midwestern locations.

Perhaps most fantastically, Slate’s resident Bad Astronomer, Phil Plait, analyzed the starry night sky in a scene from a recent episode. The quarter moon depicted in the episode, plainly speaking, is drawn backwards. Plait writes that this ‘waxing crescent moon,’ provided it was viewed from the Lower 48, should point left, away from the sun. Whether this was purposeful on the animators part or not, the moon in the sky above Springfield may hint that Springfield’s true location lies somewhere in the Southern Hemisphere.

In a 2012 interview with the Smithsonian magazine, the mastermind behind The Simpsons, Matt Groening laid some of these theories partially to rest. He claimed that he named the town Springfield after the fictional town in the ancient television show, Father Knows Best. As the show matured, Groening realized that Springfield was one of the most common town names in America. This way, he thought, everyone will think that their Springfield is THE Springfield, adding an air of personal connection, and mystery, to the beloved series.

Digging a little deeper, the Portland-born Groening admits he borrowed a lot of Springfield’s place names and geography from his Oregon hometown. Groening spent his childhood on Evergreen Terrace, the street where the Simpsons themselves reside, and anyone who’s familiar with Portland streets in the northwestern part of the city will recognize the surnames Lovejoy, Flanders, and Kearney. However, Groening refuses to admit that the hometown of the Simpsons family is based off of Springfield, Oregon. While Oregon’s Springfield is the most likely candidate for the variable geography throughout the Simpsons, Groening says, “I don’t want to ruin it for people. Whenever people say it’s Springfield, Ohio, or Springfield, Massachusetts, or Springfield, wherever, I always go, “Yup, that’s right.””

While the true location of Springfield remains a mystery, more than a few amateur map-makers have taken a shot at visually recreating Springfield. The following is a few of the most impressive representations of The Simpson’s famous hometown.

The grandaddy of all fantasy Simpson’s maps. (Created by Jerry Lerma and Terry Hogan)

This is arguably the most detailed, and best known of all fan-generated Simpson’s maps. Looking at the interactive version, you can clearly see how expansive this version of Springfield really is. The great mountains of the Springfield range lie to the West—including the Murderhorn, with the deserts of West Springfield beyond. In downtown Springfield, you can see the exact location of the Russian District (next to the Jewish Walk of Fame), as well as more frequented Springfield establishments such as the General Hospital, and Stu’s eponymous disco.

Screenshot of the interactive GIS map of Springfield. (Photo: PlayGIS)

For any true fans of The Simpsons, this map from PlayGIS, adapted from the mobile game, The Simpson’s Tapped Out, is a wonderland of nostalgia. The most beautiful thing about zooming around this interactive, GIS-based platform is how realistic everything looks. You can finally fulfill your fantasies of eating Lard Lad Donuts, and Krusty’s mystery meat burgers in the same afternoon!

One of the most impressive creations on this list is a massive Lego Springfield constructed piece-by-piece by designer Matt De Lanoy. De Lanoy’s Springfield is seriously impressive, and built with an absurd attention to detail. Illinois residents will get the chance to see the whole Lego Springfield set in person - it’s going on display at Brickworld Chicago from June 17th-21st. It’s also worth checking out the rest of De Lanoy’s work as well - he recently completed a massive Lego replica of New New York from Futurama.

Moe’s Tavern next to the Kwik-E-Mart. (Photo: Matt De Lanoy/Flickr)

De Lanoy’s set is replete with tiny details to satisfy the most hardcore fans - here’s the Blocko store, and even the “T” shaped tree. (Photo: Matt De Lanoy/Flickr)

First appearing in season seven, “Bart Sells His Soul,” Springfield’s subway system has long been a tattered, disused mess. However, in a recent episode, Bart can be seen perusing a new and improved Springfield subway map, labelled with classic Simpsons locales such as Duff Gardens, Medium-Sized Italy, and the Squidport. Despite everyone’s initial excitement, it looks like the cruddy Monorail didn’t last, after all.

One of the only versions of Springfield you can physically visit, Universal Studios in California created a life-size version of some Simpson’s hotspots. You can see the Bumblebee Man up close, and even pop into Moe’s Tavern for a cold pint of specially brewed Duff beer.

Drawn by hand, one sociologist detailed the whereabouts of over 1,300 active criminal enterprises.
maps

How could the world be spinning? Wouldn't we fall off?
map monday

Can You Spot all the Sea Monsters in this 16th-Century Map?

Beware the leviathan, and also that monstrous water pig.
Want to see fewer ads? Become a Member.
From Around the Web
THE GASTRO OBSCURA BOOK
Taste the World!
An eye-opening journey through the history, culture, and places of the culinary world. Order Now