A Remote Valley, a Drone, And an Extinct Flower That's Not Extinct Anymore - Atlas Obscura
Want to see fewer ads? Become a Member. 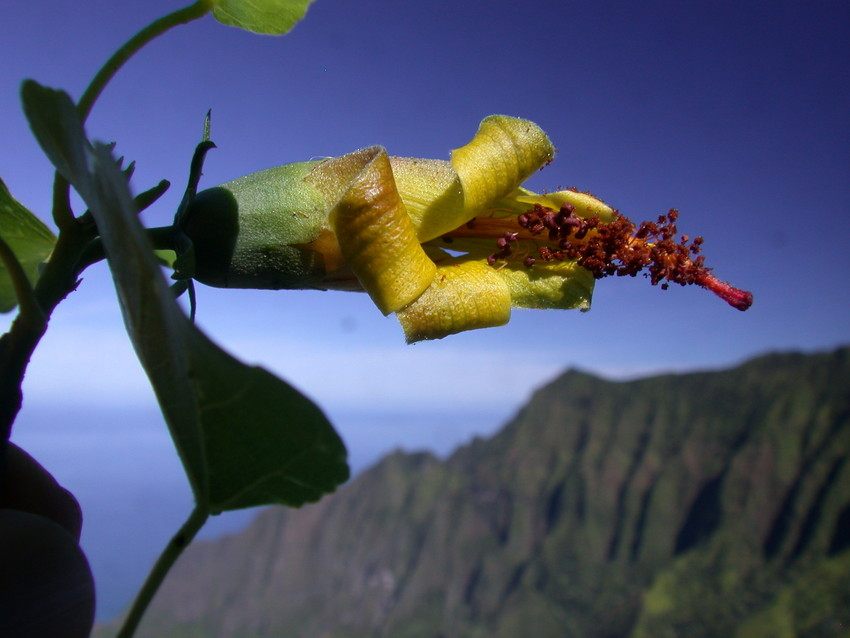 In 1991, botanists from the National Tropical Botanical Garden (NTBG), a Hawai’i-based nonprofit, discovered the rare and beautiful Hibiscadelphus woodii, a native flower and relative of the hibiscus. The plant, found growing on a cliff in the Kalalau Valley in the island of Kauai, was officially named four years later, which made it the seventh recorded Hibiscadelphus species. In 2016, H. woodii was classified as extinct.

The last time the vibrant flower had been seen alive was in 2009—until recently. Earlier this year, scientists from NTBG made an exciting discovery while using drone technology in a very remote part of the Kalalau Valley’s steep cliffs: H. woodii was growing again. This study, lead by GIS coordinator and drone specialist Ben Nyberg, revealed three individuals of the rare plant growing in a small cluster on the cliff face. “We had a grant from Mohamed bin Zayed Species Conservation Fund aimed specifically at rediscovering the species,” says Nyberg. “Still photos captured one individual in late January 2019, [and we] confirmed identification and found an additional two individuals in late February.”

H. woodii tends to grow as a small tree, and produces vivid yellow flowers that are known to turn maroon with age. According to Nyberg, this particular genus is “extremely rare and only found in Hawai’i,” nectar-rich, and “most likely pollinated by Hawai’ian honeycreepers.”

Botanists at the NTBG have discovered a remarkable 11 new plant species in the cliff region over the last few decades. In a statement given to National Geographic, NTBG research biologist Kenneth R. Wood said, “When examining floristic diversity throughout the Hawai’ian Islands, no other valley compares to Kalalau in the number of its unique species.” Part of the reason for this is the sheer inaccessibility of the valley. Hence the drone. (Wood was rappelling down the perilous face when he discovered the flower in 1991.) “The cliffs provide protection from invasive species,” says Nyberg.

Before rediscovering the flower this year, scientists did make efforts to propagate H. woodii through grafting, cutting, and cross-pollination. But nothing stuck. Now a drone has opened the valley up to research in a way it never had been before. As for the future of the H. woodii, Nyberg says they will once again try to be active in keeping it alive. “We are exploring a drone cutting mechanism that with some testing could provide a platform for collecting plant material such as seeds or cuttings.”

Found: One of the Largest Carnivorous Land Mammals Ever, in a Museum Drawer

Step 1: Evict all the pigs.
horticulture

In botanic gardens, the lineage of a famously smelly plant is threatened. What can save it?
Video • PinDrop