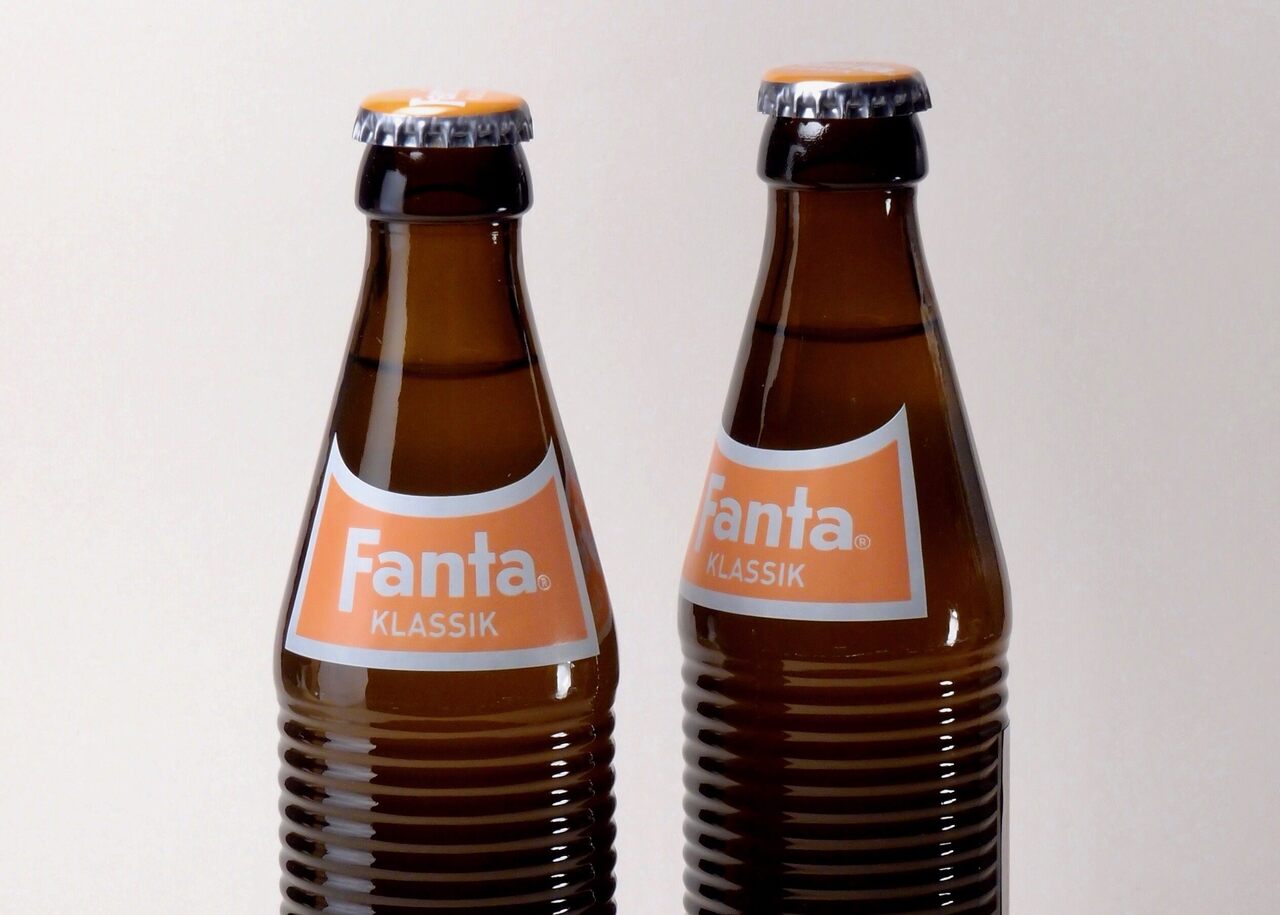 Retro bottles released by Coca-Cola for Fanta's 75th anniversary. SKopp, cropped from the original, CC BY 4.0
In This Story
Destination Guide

It’s February 1944, and Berlin is attempting to recover from American aerial bombing. But life and industry continues on the city’s outskirts. In farmhouses, bottles clang and a mix of ex-convicts, Chinese laborers, and other workers fill glass bottles of what was likely a cloudy, brownish liquid. This is one of Coca-Cola’s makeshift bottling operations, and they are making Nazi Germany’s signature beverage. Even during war, Germans want their Fanta.

The soft drink Fanta was invented by Coca-Cola, an American company, inside of Nazi Germany during World War II. Developed at the height of the Third Reich, the new soda ensured the brand’s continued popularity. Fanta became a point of nationalistic pride and was consumed by the German public, from the Fraus cooking at home to the highest officials of the Nazi party.

The drink was technically fruit-flavored, but limited wartime resources made that descriptor not wholly accurate. Its ingredients were less than appetizing: leftover apple fibers, mash from cider presses, and whey, a cheese by-product. “[Fanta] was made from the leftovers of the leftovers,” says Mark Pendergrast, who, as the author of For God, Country, and Coca-Cola, revealed this hidden past. “I don’t imagine it tasted very good.”

By the time Hitler and the Third Reich marched into Austria, Coca-Cola had been in Germany for nearly a decade. Coke was invented in 1886 by Dr. John Stith Pemberton, who sold it at a local Atlanta pharmacy for five cents a glass. Pemberton was a Confederate Civil War veteran still suffering from a saber wound. While recovering, he became addicted to morphine. Coca-Cola—made from the coca leaf and the kola nut, hence the name—was his attempt to find an alternative painkiller.

The coca leaf is used to make highly addictive cocaine, which may help explain the drink’s quick expansion. In 1895, Coca-Cola’s CEO boasted of its presence in every American state and territory. In 1920, the company’s first European bottling plant opened in France, and by 1929, Coca-Cola was being bottled and drunk in Germany.

In 1933, right when Hitler and the Nazi Party were assuming power, German-born Max Keith (pronounced “Kite”) took over the company’s German subsidiary, Coca-Cola GmbH. Keith was an imposing figure: tall, intimidating, possessing a “little whisk-broom mustache” (not unlike Hitler’s), charming but quick-tempered, and utterly devoted to Coca-Cola. “[Keith] valued his allegiance to the drink and to the company more than his allegiance to his own country,” says Pendergrast. For that reason, he saw no quarrel with boosting sales by tying Coca-Cola to every aspect of German life and, increasingly, Nazi rule.

Back in America, the Coca-Cola Company—led by Robert Woodruff—did not discourage this. The company sponsored the 1936 Berlin Olympics, which Woodruff attended, and made banners featuring the Coca-Cola logo alongside the swastika. Keith used a 10th anniversary party for Coca-Cola GmbH to order a mass Sieg-Heil (Nazi salute) in honor of the dictator’s 50th birthday. He declared that this was “to commemorate our deepest admiration for our Fuhrer.”

Coca-Cola wasn’t alone in ignoring Hitler’s increasing aggression. Other American industries, such as Hollywood, overlooked Nazi Germany’s human rights atrocities and went out of their way to retain German business.

Hitler’s invasion of Europe in 1939 didn’t faze Keith or Atlanta-based Coca-Cola either: The company continuously supplied its German subsidiary with syrup and supplies. In addition, Keith followed German troops into conquered countries—such as Italy, France, and Holland—to take over their respective Coca-Cola businesses. By 1940, Coca-Cola was the undisputed soft drink king of Nazi Germany. According to legend, there’s a photo in the Coke archives of military leader Hermann Göring chugging a bottle of Coca-Cola. Hitler was rumored to enjoy the caffeinated beverage while watching American movies like Gone with the Wind. Then, on December 7, 1941, Japan bombed Pearl Harbor.

The U.S.’s entrance into World War II meant that American companies had to immediately stop all business activities with the enemy. In addition, the German government was threatening to seize “enemy-owned” businesses. General Motors pulled out of Germany (though, Opel, a fully owned subsidiary of GM, still operated there). IBM’s operations were seized by the Third Reich, though controversy exists on how much they contributed to the German war effort. Coca-Cola HQ in Atlanta also cut off communications with Keith in Germany and halted the export of Coca-Cola’s 7X flavoring (the long-mythicized, top secret formula for Coca-Cola syrup).

Coca-Cola GmbH was on the verge of going flat. Keith couldn’t make Coke, and at any point, the Nazi government could seize his beloved company. But he had an idea: He needed an alternative beverage specifically for the German market.

Working with his chemists, Keith patched together a recipe within the limitations imposed by wartime rationing. It was basically made from the leftovers of other food industries: fruit shavings, apple fibers and pulp, beet sugar, and whey, the liquid remaining after milk has been curdled and strained during cheese production. To name this concoction, Keith told his team to use their imagination. Joe Knipp, a salesman, pitched “Fanta,” shorthand for the German word for “fantasy.” It stuck.

Fanta saved Coca-Cola GmbH. Sales rose gradually during the war, particularly as other choices became harder and harder to find. It wasn’t simply drunk either. Fanta was popular as a sweetener for soups due to severe sugar rationing, since the drink’s renown earned it an exemption from the rationing after 1941 (though Keith had to use beet sugar). It was likely used for a variety of other cooking and baking needs as well.

“It was Fanta or nothing,” says Tristan Donovan, author of the book Fizz: How Soda Shook Up the World. “It had pretty much market dominance during war time.” By 1943, sales had reached nearly three million cases.

For Pendergrast, there’s little doubt that Keith worked with the Nazis, but he sees Keith as a corporate man rather than a Nazi ideologue. “You could not do business inside of Nazi Germany unless you collaborated with them,” says Pendergrast. “There’s no question he was a Nazi collaborator. [But] he was not a member of the Nazi party. His allegiance was to Coca-Cola, not to Hitler.”

One couldn’t blame Keith for being confident that this odd, carbonated, sort-of-cheese tasting drink was his ticket to ascension in the world of Coca-Cola. Says Donovan, “Maybe in the back of [Keith’s] mind, he had this vision that if Germany wins, then [he would] become the head of Coca-Cola International.” Of course, Germany did not win the war. As the liberating American troops rode into Germany in the summer of 1945, legend has it, they found Keith in a half-bombed plant still bottling Fanta. Production of Fanta ceased before the end of the year.

Despite being on the wrong side of history, Keith did get his wish partially. He was hailed as a hero by the Americans back in Atlanta for keeping the company alive in Germany. The company’s VP of Sales, Harrison Jones, praised Keith by calling him a “great man” for operating in dire circumstances. He was given command of Coca-Cola Europe.

In April 1955, Coca-Cola reintroduced Fanta with a new recipe, this time as an orange-flavored drink. It debuted in Italy, before making its way to the United States in 1958. According to Pendergrast, they revived the name largely because it was convenient. After all, Coca-Cola already had the copyright. “I don’t think anyone [at Coca-Cola] cared that [Fanta] had roots inside of Nazi Germany,” says Pendergrast, “I think they thought no one would pay attention.”

Thailand’s Spirits Have a Taste for Red Fanta

The ruby-red drink is a mainstay at spirit houses and shrines.
food

Scholars, writers, and missionaries all exclaimed over how much food was available.
Video • Object of Intrigue

One of the oldest wine cellars in Germany is now a restaurant beneath Bremen's town hall.
Cologne, Germany

This small condiment museum makes all manner of mustards with a 200-year-old mill.
Berlin, Germany

Berliners converted a bombed-out, disused lot into a community-run urban farm with its own cafe and bar.
Want to see fewer ads? Become a Member.
Related

The "loneliest woman in America" brewed root beer for thousands of visitors.
Read more
Thanks for sharing!