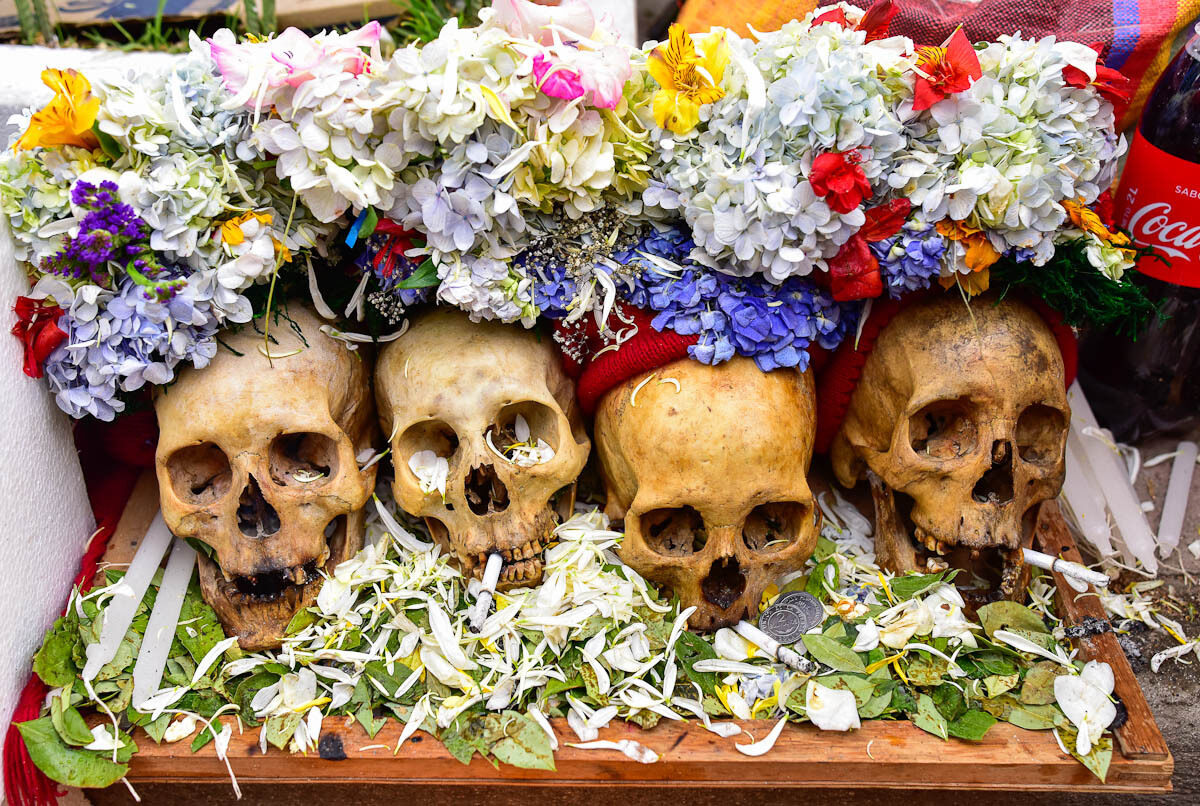 On an overcast November day, Juan Chipon strolled into the chapel at the Cementerio General in La Paz, Bolivia, carrying the skull of his father. While this might sound like the beginning of a horror film, Juan was happy and smiling, and the skull was covered in floral wreaths in celebration. Behind Juan came others, also carrying elaborately decorated skulls.

A local woman named Mariela sauntered in carrying her uncle’s skull, a biker hat perched on his forehead and a glistening diamond embedded in one of his front teeth—“Yes, it’s a real diamond!” she said, offended by the thought that it might be a fake. Behind her came Xahina, struggling with a large tray of four crania. And following them came thousands more, all part of what is the world’s most flamboyant exaltation of the link between the living and the dead, an annual ritual like no other in the world.

The skulls are known locally as ñatitas (roughly meaning “the little pug-nosed ones”), and this overcast morning was the beginning of their day. A massive public festival held every November 8, the Fiesta de las Ñatitas, gives thanks to the dead, as personified by their very skulls, for a year’s worth of friendship and service.

Here on the high plateau of the Andes death has never been a fatalistic concept; those who pass on have simply transcended to another phase of life, and can still function within the family or social group. Keeping a ñatita in one’s home is considered by many people to provide a great benefit, since the dead are thought to have the ability to offer services to those still living. The skull can provide security for the home, ensure domestic tranquility, aid students in their schoolwork, and provide sage advice.

A ñatita can be the skull of a relative, like Juan Chipon’s father, but they are just as frequently those of strangers, obtained from medical schools or old cemeteries, who reveal an identity to their new owner in a dream. Normally they are kept in household shrines, but for the Fiesta they return to the cemetery as a jubilant mass.

At the Cementario General, where the biggest festivity takes place, the event is a veritable postmortem fashion show. Many skulls wear glasses or hats, while others are styled in emulation of those who keep them. Some will be enshrined like relics or carried in like little princes—for the more than 10,000 people in attendance, the effort put into the presentation of one’s ñatita provides a visible sign of love and esteem.

Several women stand behind their natitas while the chapel’s priest reads an oration for the dead.

By mid day, with the celebration in full swing, the cemetery grounds are literally awash in skulls. Devotees wander among them, providing tributes. Cigarettes placed between their jaws and coca leaves are common, but the most prominent are flower petals and crowns, as a reminder of the beautiful things of the natural world. Adding a touch of cacophony, strolling musicians offer deafeningly loud Bolivian dance music to edify the skulls.

The roots of the festival date to the Pre-Columbian world, and surviving records indicate celebrations conforming to the modern festival have been going on in Bolivia since at least the beginning of the 20th century. Beyond that, the history is murky, but that doesn’t trouble anyone assembled at the cemetery, because despite the presence of so many skulls, the focus is not on the past and definitely not on death.

“It’s about life, about the future, about gratitude and a bond,” explains Xahina, with her four skulls now set up in a makeshift altar in the cemetery grounds. “In your country, maybe the dead really do die,” she continues, “but here death isn’t so final. It’s not a contradiction because the dead are only as dead as you allow them to be. For those of us here, the dead are still very much a vital part of our lives.”

Read the Original Pitch for Thanksgiving, From the Editress Who Created the Holiday

Instead it has animal skins, cowbells, bullwhips, and frightened children.
cemeteries

Masterpieces of memento mori.
Read more
Thanks for sharing!