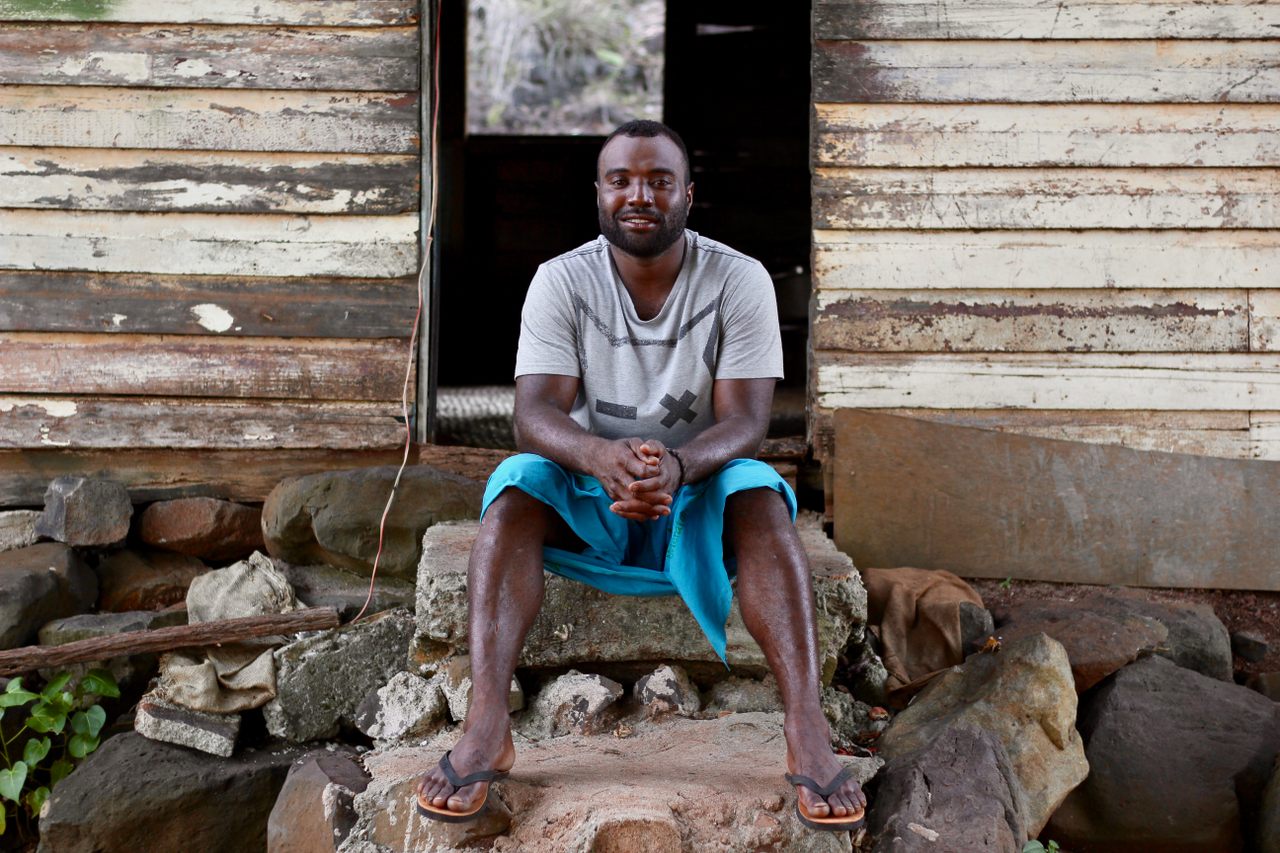 The first clue that you shouldn’t mess with Eroni Matatia when it comes to Fiji’s reptiles is found on his Facebook page. In his profile picture, Matatia is holding baby turtles, arms crossed out front like a gangsta posing with wads of cash. The second clue comes from his heritage. Matatia is a third-generation crested iguana ranger and one of the few paid wildlife rangers in Fiji to guard against poachers picking off the island nation’s numerous endemic species.

“My grandfather once told me that the love for the environment, for animals should come from my heart,” says Matatia, 30, who goes by “Mata” for short. “I love this job and it comes from my heart, to be honest.”

Like his grandfather and his uncle before him, Matatia watches over the tiny and uninhabited island of Yadua Taba in Fiji’s north (well, it’s uninhabited except for about 12,000 crested iguanas). Other than a scattering of other smaller colonies around Fiji, the crested iguana, known locally as “vokai,” exists nowhere else in the world except on Yadua Taba.

It is listed as critically endangered on the International Union for Conservation of Nature’s Red List, and numerous organizations and governments are pitching in to boost the iguana’s numbers. Those low numbers, coupled with bright green skin and white stripes, make the crested iguana like catnip for exotic animal collectors.

Matatia grew into the role as official iguana guardian, assisting his grandfather and then his uncle, who had a stroke a few years ago and could not continue. The family lives on Yadua, the island next door. There, a small village of about 200 people lives mostly off what they grow on the land and catch in the sea. There is no running water for showers and one of the few places for a bar of cell phone reception is near the village mango tree.

Generations ago the village residents on Yadua began keeping their goats on Yadua Taba and allowing them to roam around the island, Matatia says. The goats would eat all the ground vegetation and then took to munching on bark, killing the trees that iguanas use to hide from their main predator, the peregrine falcon. “They [the goats] would ring-bark the trees,” says Matatia. Goats have caused similar problems in other Fiji iguana sanctuaries.

Now, “the biggest problem is smuggling,” says Matatia of his role as iguana ranger. At least three days a week, Matatia takes the short trip in his 75-horsepower boat out to Yadua Taba. He combs several small beaches looking for footprints that could hint at poaching activities. Then there’s scanning hours of CCTV footage from numerous security cameras set up around the island. When the occasional sailboat moors in one of Yadua Taba’s bay, he searches it for stolen iguanas.

A few years back, Matatia was on one side of the island while uncle was in the bay spearfishing. The uncle watched as two kayakers paddled from a boat to the island and began stuffing iguanas into backpacks. When he approached them they claimed not to speak English and fled. When some crested iguanas showed up in Europe a year later, they were likely the ones stolen from Yadua Taba, according to Robert Fisher, a biologist with the United States Geological Survey. The USGS assists the National Trust of Fiji, which leased Yadua Taba from the reigning chief so it could remain a crested iguana sanctuary.

Poachers have proven hard to catch. In the same way that shoplifting isn’t a crime until you leave the store, it’s difficult for authorities to make an arrest unless the smugglers are caught taking an animal out of the country, says Fisher. In 1997 Fiji signed the Convention on International Trade in Endangered Species of Wild Flora and Fauna, which outlaws the international trade of endangered species.

In recent years, Fiji authorities have only caught one crested-iguana smuggler, a German man who tried to leave the country in 2011 with a pregnant female. Another man attempted to smuggle banded iguanas, also a native Fijian species, using a hollowed-out prosthetic leg. “These animals have a high value in the European black market,” says Fisher. The smuggler with the prosthetic leg had previously sold four banded iguanas for $32,000, the Fiji Sun reported.

Just as poachers lurk around Yadua Taba, they also lurk online. A few months ago, Matatia accepted a Facebook friend request from someone he didn’t know. It turned out to be a well-known poacher. The poacher, who goes by numerous aliases, was referred to as “Benjamin Bucks” in the book Stolen World, according to Fisher. Stolen World takes a deep look at smugglers and how they operate. “Robert Fisher emailed me to say ‘You need to unfriend that person. He is one of the smugglers,’” says Matatia.

If anything, the poachers have guts. A few weeks later that same smuggler turned up at an iguana specialist conference in Fiji, according to Fisher and Matatia. When he was recognized, “he ran away from us,” says Matatia. Lacking evidence, Fiji authorities could not arrest or fine the poacher.

“The animals have no conservation value to these people,” says Fisher. “It is just a novel thing and it has a monetary value.”

Found: An Invading Snail That Slings Slime at its Prey