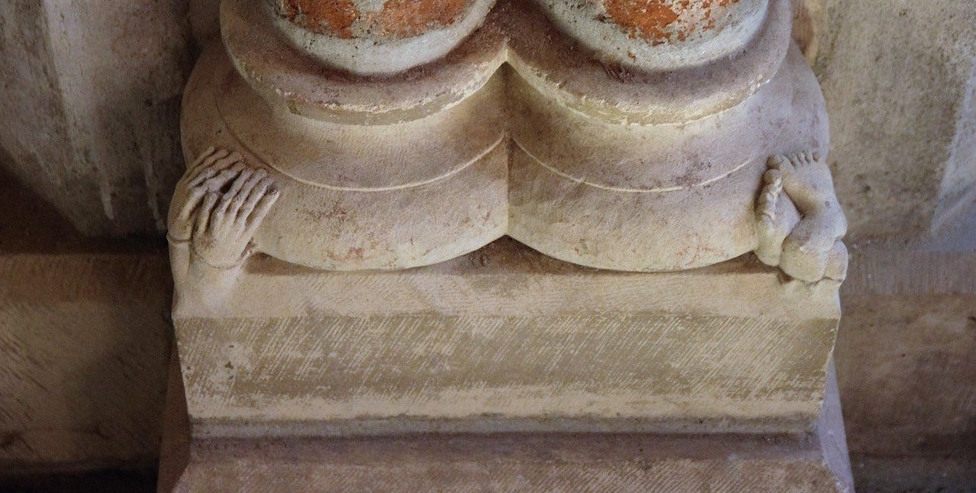 Poor little fella Pistolero31/CC BY 2.0
In This Story
Place

There is a strange little carving of a person seemingly crushed by a pillar behind the remains of St. Thomas Aquinas.
Place

This strange bovine gargoyle is said to have been put in as a passive aggressive form of revenge.

The modern use of the term “easter egg”—not the holiday treat but rather a hidden joke or surprise item inserted in a piece of media—originated with Atari in 1979, when a developer snuck his name into a game hoping to get some recognition as the creator. But these surprise treats, hidden to all but those who look closely enough, aren’t only lurking in the digital world. Some of the best easter eggs are snuck into the physical architecture around us.

The excellent thing about architectural easter eggs, be they tongue-in-cheek, carved out of spite, or simply placed as a fun treat awaiting an observant eye, is that they endure in the landscape around us, becoming a sneaky and often confusing part of history. Here are five hidden carvings that dot historic structures with a bit of human nature.

On the southern window of Brno’s Church of St. James, one sculptural element of the impressive church seems somewhat out of place: an indecent little two-headed man cheekily displaying his bare butt to the world.

There are two legends attributed to the little man, both involving the competition between this Gothic church and a nearby cathedral. The spires of the two churches both towered high, but St. James’ ended up being taller by roughly 30 feet. As the story goes, the naked man and his bottom were added on as a middle finger from the winning church to the losing one. Alas, some historians claim the legends are apocryphal, and that the rude sculpture is merely a strange but not uncommon piece of Gothic adornment.

The Church of the Jacobins is a Gothic mass of brick and stone, decorated inside with elaborate trompe l’oeil walls and soaring pillars. Most famously, it houses the remains of St. Thomas Aquinas. A lot less famously, it has a strange little carving of a person seemingly crushed by a pillar near the golden reliquary where the saintly remains are entombed.

Just behind the altar is a double column that sits on a square base. Look down towards the floor and you’ll see, sticking out, a peculiar pair of bony hands and chubby crossed feet, their meaning and origin unknown. It is all too easy to miss to the casual passer-by. Some of the church tour guides don’t even know the crushed little man is there.

The sixth-largest cathedral in the world, this stunning neo-Gothic construction is a functioning place of worship as well as a popular tourist destination. Nearly half a million people enter through its doors each year, many of them just to admire its breathtaking beauty. It’s perhaps fitting, then, that the cathedral offers a bit of tongue-in-cheek eye candy for the dedicated architecture enthusiast—a well-hidden, but very official, carving of Star Wars villain Darth Vader perched high among its many spires.

This great Florentine cathedral has many details that are often invisible at first glance. Among them, on the left side, is a stone bull’s head.

While no one is sure exactly why the bull was put in place, there are some prevailing theories. Local legend says that during the construction of the cathedral, one of the stonemasons had an affair with the wife of a rich shopkeeper in the area. When her husband discovered the betrayal, he decided to lodge a complaint directly to the ecclesiastical court, which ended the affair.

Heartbroken, the stonemason decided to take revenge by creating a passive-aggressive symbol of his love. The mason placed the bull’s head so that the animal’s horns were pointing right toward the shop of the husband as a concrete reminder—pun intended—of who his wife truly loved.

The centuries-old Cathedral of Salamanca has several unusual carvings, but none so surprising as an astronaut. The little space man is an approved and modern addition to the Gothic cathedral, which underwent restoration work in 1992.

Among the other recently added images are a dragon eating ice cream, a lynx, a bull, and a crayfish. Despite there being clear documentation of the astronaut being a recent addition, it has already fueled ideas of ancient space travel and alien interventions.

Livin' On The Edge: The Precarious Architecture of 7 European Cliff Cities