The Future is Floating for the Netherlands and Other Low-Lying Countries - Atlas Obscura
Want to see fewer ads? Become a Member. 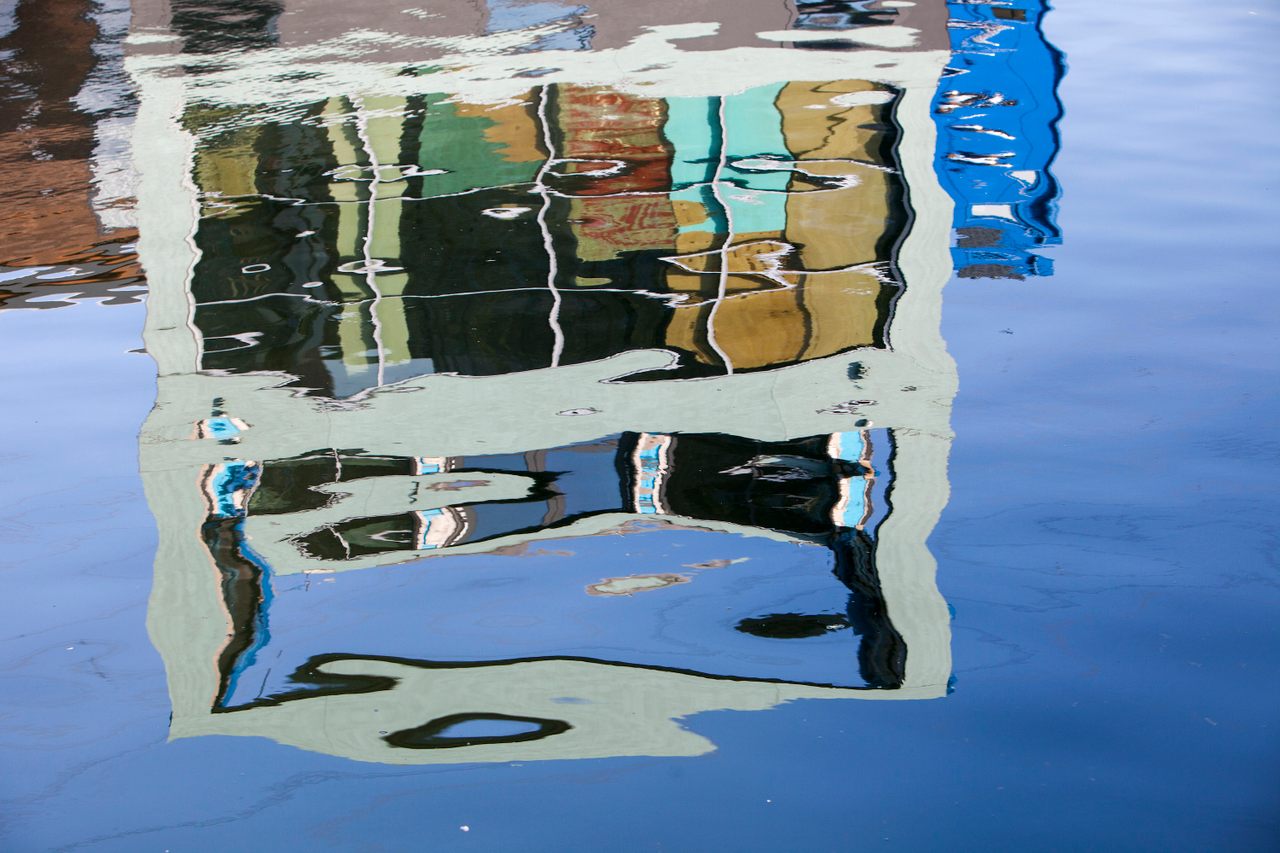 With about a third of the country below the current sea level, the Netherlands is embracing floating houses and other buildings that can adapt to rising waters. Ashley Cooper/Getty Images
In This Story
Destination Guide

This piece was originally published in Yale Environment 360 and appears here as part of our Climate Desk collaboration.

When a heavy storm hit in October, residents of the floating community of Schoonschip in Amsterdam had little doubt they could ride it out. They tied up their bikes and outdoor benches, checked in with neighbors to ensure everyone had enough food and water, and hunkered down as their neighborhood slid up and down its steel foundational pillars, rising along with the water and descending to its original position after the rain subsided.

“We feel safer in a storm because we are floating,” said Siti Boelen, a Dutch television producer who moved into Schoonschip two years ago. “I think it’s kind of strange that building on water is not a priority worldwide.”

As sea levels rise and supercharged storms cause waters to swell, floating neighborhoods offer an experiment in flood defense that could allow coastal communities to better withstand climate change. In the land-scarce but densely populated Netherlands, demand for such homes is growing. And, as more people look to build on the water there, officials are working to update zoning laws to make the construction of floating homes easier.

“The municipality wants to expand the concept of floating because it is multifunctional use of space for housing, and because the sustainable way is the way forward,” said Nienke van Renssen, an Amsterdam city councilor from the GreenLeft party.

The floating communities in the Netherlands that have emerged in the past decade have served as proof of concept for larger-scale projects now being spearheaded by Dutch engineers, not just in European countries like Britain, France, and Norway, but also places as far-flung as French Polynesia and the Maldives, the Indian Ocean nation now facing an existential threat from sea level rise. There is even a proposal for floating islands in the Baltic Sea on which small cities would be built.

A floating house can be constructed on any shoreline and is able to cope with rising seas or rain-induced floods by floating atop the water’s surface. Unlike houseboats, which can easily be unmoored and relocated, floating homes are fixed to the shore, often resting on steel poles, and are usually connected to the local sewer system and power grid. They are structurally similar to houses built on land, but instead of a basement, they have a concrete hull that acts as a counterweight, allowing them to remain stable in the water. In the Netherlands, they are often prefabricated, square-shaped, three-story townhouses built offsite with conventional materials like timber, steel, and glass. For cities facing worsening floods and a shortage of buildable land, floating homes are one potential blueprint for how to expand urban housing in the age of climate change.

Koen Olthuis, who in 2003 founded Waterstudio, a Dutch architectural firm focused exclusively on floating buildings, said that the relatively low-tech nature of floating homes is potentially their biggest advantage. The homes he designs are stabilized by poles dug roughly 65 meters into the ground and outfitted with shock-absorbent materials to reduce the feeling of movement from nearby waves. The houses ascend when waters rise and descend when waters recede. But despite their apparent simplicity, Olthuis contends they have the potential to transform cities in ways not seen since the introduction of the elevator, which pushed skylines upward.

“We now have the tech, the possibility to build on water,” said Olthuis, who has designed 300 floating homes, offices, schools, and healthcare centers. He added that he and his colleagues “don’t see ourselves as architects, but as city doctors, and we see water as a medicine.”

In the Netherlands, a country which is largely built on reclaimed land and a third of which remains below sea level, the idea is not so far-fetched. In Amsterdam, which has almost 3,000 officially registered traditional houseboats across its canals, hundreds of people have moved into floating homes in previously neglected neighborhoods.

Schoonschip, designed by the Dutch firm Space&Matter, consists of 30 houses, half of which are duplexes, on a canal in a former manufacturing area. The neighborhood is a short ferry ride from central Amsterdam, where many of the residents work. Community members share nearly everything, including bikes, cars, and food bought from local farmers. Each building runs its own heat pump and devotes roughly a third of its roof to greenery and solar panels. Residents sell surplus power to one another and to the national grid.

“Living on water is normal for us, which is exactly the point,” said Marjan de Blok, a Dutch TV director who initiated the project in 2009 by organizing the collective of architects, legal experts, engineers, and residents that worked to get the project off the ground.

Rotterdam, which is 90 percent below sea level and the site of Europe’s biggest port, is home to the world’s largest floating office building, as well as a floating farm where cows are milked by robots, supplying dairy products to local grocery stores. Since the 2010 launch of the Floating Pavilion, a solar-powered meeting and event space in Rotterdam’s harbor, the city has been ramping up efforts to mainstream such projects, naming floating buildings one of the pillars of its Climate Proof and Adaptation Strategy.

“Over the last 15 years, we’ve reinvented ourselves as a delta city,” said Arnoud Molenaar, chief resilience officer with the City of Rotterdam. “Instead of seeing water just as an enemy, we see it as an opportunity.”

To help protect cities against climate change, in 2006 the Dutch government undertook its “Room for the River” program, which strategically allows certain areas to flood during periods of heavy rain, a paradigm shift that seeks to embrace, rather than resist, rising water levels. Olthuis says the housing shortage in the Netherlands could fuel demand for floating homes, including in “Room for the River” areas where floods will be, at least for a portion of the year, part of the landscape. Experts say that relieving the Netherland housing shortage will require the construction of 1 million new homes over the next 10 years. Floating homes could help make up the shortage of land that is suitable for development.

Dutch firms specializing in floating buildings have been inundated with requests from developers abroad to undertake more ambitious projects. Blue21, a Dutch tech company focused on floating buildings, is currently working on a proposed series of floating islands in the Baltic Sea that would house 50,000 people and connect to a privately funded 15 billion Euro underwater rail tunnel that would link Helsinki, Finland, and Tallin, Estonia; the project is backed by Finnish investor and “Angry Birds” entrepreneur Peter Vesterbacka.

Waterstudio will oversee construction this winter of a floating housing development near the low-lying capital of Male in the Maldives, where 80 percent of the country sits less than one meter above sea level. It is composed of simply designed, affordable housing for 20,000 people. Underneath the hulls will be artificial coral to help support marine life. The buildings will pump cold seawater from the deep to power air conditioning systems.

Floating homes pose numerous challenges, however. Severe wind and rainstorms, or even the passing of large cruise ships, can make the buildings rock. Siti Boelen, the Schoonschip resident, said that when she first moved in, stormy weather made her think twice before venturing up to her third-floor kitchen, where she felt the movement the most. “You feel it in your stomach,” she said, adding that she has since gotten used to the feeling.

Floating homes also require extra infrastructure and work to connect to the electricity grid and sewer system, with special waterproof cords and pumps needed to link to municipal services on higher ground. In the case of Schoonschip in Amsterdam and the floating office building in Rotterdam, new microgrids had to be built from scratch.

But the benefits may outweigh the costs. Rutger de Graaf, the cofounder and director of Blue21, said that the growing number of disastrous, unprecedented storms around the world has spurred both city planners and residents to look to the water for solutions. Floating developments, he said, could have saved lives and billions of dollars in damage as recently as last summer, when deadly floods hit Germany and Belgium, killing at least 222 people.

“If there are floods, it’s expected that many people will move to higher ground. But the alternative is to stay close to coastal cities and explore expansion onto the water,” says De Graaf. “If you consider that in the second half of the century, hundreds of millions of people will be displaced by sea level rise, we need to start now to increase the scale of floating developments.”

Sometimes, to stand the test of time, buildings can't stay where they are.
sinkhole

Receding waters are leaving behind an environmental disaster, and a new kind of tourism.
architecture

Climate change is destroying centuries-old structures in remote Mustang. Can the buildings—and the culture—be saved?
architecture

"Sowing water" in this mountainous region has been crucial for people, crops, and biodiversity for more than a millennium.
Video • AO Docs