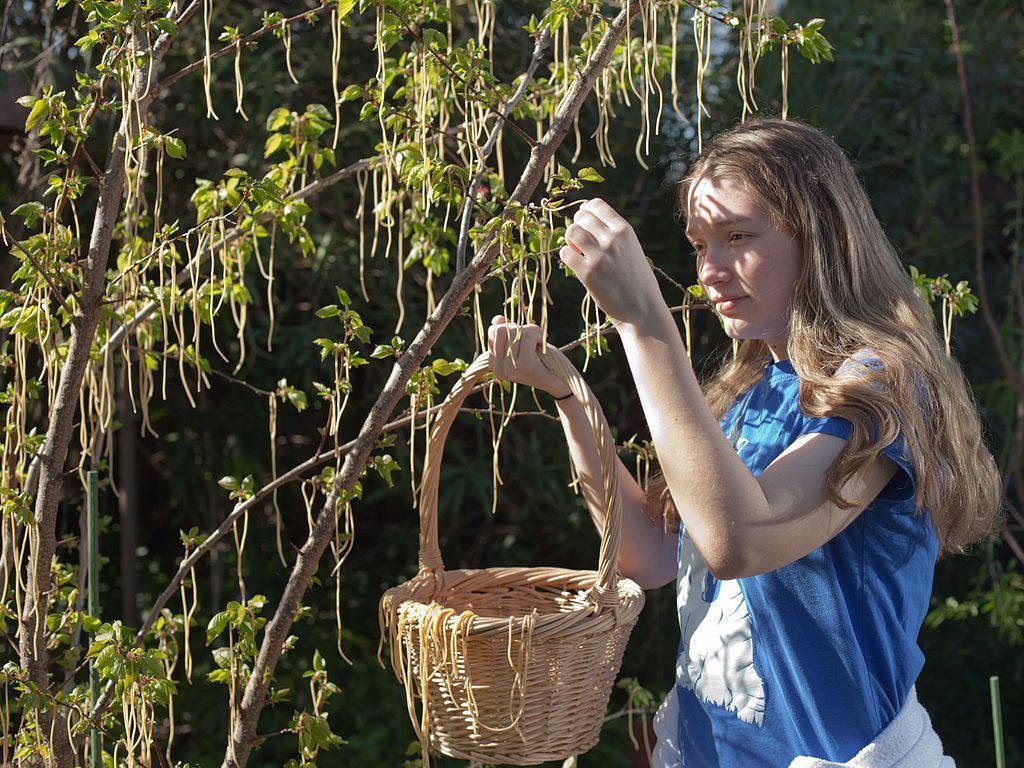 A (much later) recreation of the BBC spaghetti-tree prank. Robert Couse-Baker/CC BY 2.0
In This Story
Food

What began as an April Fools' Day prank ended in a testicle-spiked beer.

THIS ARTICLE IS ADAPTED FROM THE APRIL 2, 2022, EDITION OF GASTRO OBSCURA’S FAVORITE THINGS NEWSLETTER. YOU CAN SIGN UP HERE.

I do love a good prank. For six months, for example, I snuck increasingly improbable produce into my editor’s desktop fruit bowl, culminating in a coconut with a sizable branch still attached.

But during my first year at Atlas Obscura, our editor-in-chief forbade anything like a fake article, or even fake tweets, for April 1.

I’ll admit, I sulked about it. I had grand aspirations: doctoring the homepage to make it look like we had transformed overnight into a publication covering Greek-letter shenanigans on college campuses. (In other words, “Fratlas Obscura.”)

But I’ve come around. Fake articles and even fake tweets have a way of lingering, misleading people long past April Fools. A few years back, my mother sent me an article about the world’s oldest break-up letter, supposedly written in the 6th century BC, in all seriousness.

But even though we can’t do any pranks, that doesn’t mean I can’t write about them. A surprising number of the great pranks of history involve food. Here’s a roundup of pranks we’ve covered over the years, plus the most famous culinary con of all time.

1. The “Real” Story of Hansel and Gretel

Way back in 2018, I found a baking website that claimed the story of Hansel and Gretel was real, citing a certain book as proof. Curious, I asked reporter Jordan Todorov to hunt down the author of said book, German comedian Hans Traxler, who fooled quite a few people in 1963 with a fake archeological dig that he said unearthed the gingerbread recipe, as well as the burned bones of a woman falsely accused of being a witch in 17th-century Germany. It was a convincing enough tale that when the truth came out, he was sued for fraud.

2. The “Real” Dirt on Thomas Edison

Thomas Edison, the controversial but clever wunderkind, was esteemed enough in his day that a report on a fake invention of his actually gained traction. On April 1, 1878, a New York newspaper described how Edison had created a machine that could turn dirt, air, and light into “oranges and cabbages that have never felt the wind and rain, and pork and partridges that have never been alive.”

Other newspapers across the world reprinted the story, ensuring that an amused Edison received letters genuinely asking about the marvelous machine. The newspaper itself later printed an article revealing the con, and lamenting “the careless American habit of hasty reading.”

3. The “Real” Origins of Spaghetti

This prank is well known, not obscure. But if you haven’t heard of it, here goes:

On April 1, 1957, a BBC television program broadcast a special episode about the spaghetti trees of southern Switzerland, showing a family happily harvesting the noodles. There’s been much hilarity over the ensuing decades about how many British people were completely taken in by the joke, with the BBC office receiving hundreds of calls the following day about where to acquire spaghetti trees.

This often makes the list of best hoaxes of all time. Several factors made it quite credible: the relative rarity of spaghetti dinners in Britain at the time, the plummy voice of broadcaster Richard Dimbleby, and on-location shots in both Switzerland and a Hertfordshire pasta factory.

No one ever took that BBC story as inspiration to breed a spaghetti tree, and Thomas Edison didn’t sit down to create a dirt-to-food machine after April 1, 1878. However, an April Fool’s joke in 2012 is responsible for the existence of a beer made with bull testicles.

It’s long been a joke or euphemism in the American West to refer to fried bull testicles as “Rocky Mountain oysters.” So when Wynkoop Brewery in Denver, Colorado, announced in 2012 they were making a beer with the balls, it was good for a laugh.

But it only took six months of growing interest and curiosity for the brewers at Wynkoop to throw up their hands and turn the joke into reality. Described as “meaty,” with “a viscous mouthfeel,” Rocky Mountain Oyster Stout is made today with six balls per barrel. It’s proven popular enough that the brewery recently whipped up a vegan version with chestnut chips swapped in for the testicles.

The Hoax That Claimed Thomas Edison Could Turn Dirt Into Food

Do you remember a spoof news segment about this traditional Jewish food?
roadside attractions

For more than 30 years, Mark Cline has been keeping the state weird.
Video • Wonder From Home