An Ancient Croc Stepped in Poop and Created a Portal to the Past - Atlas Obscura
Want to see fewer ads? Become a Member. 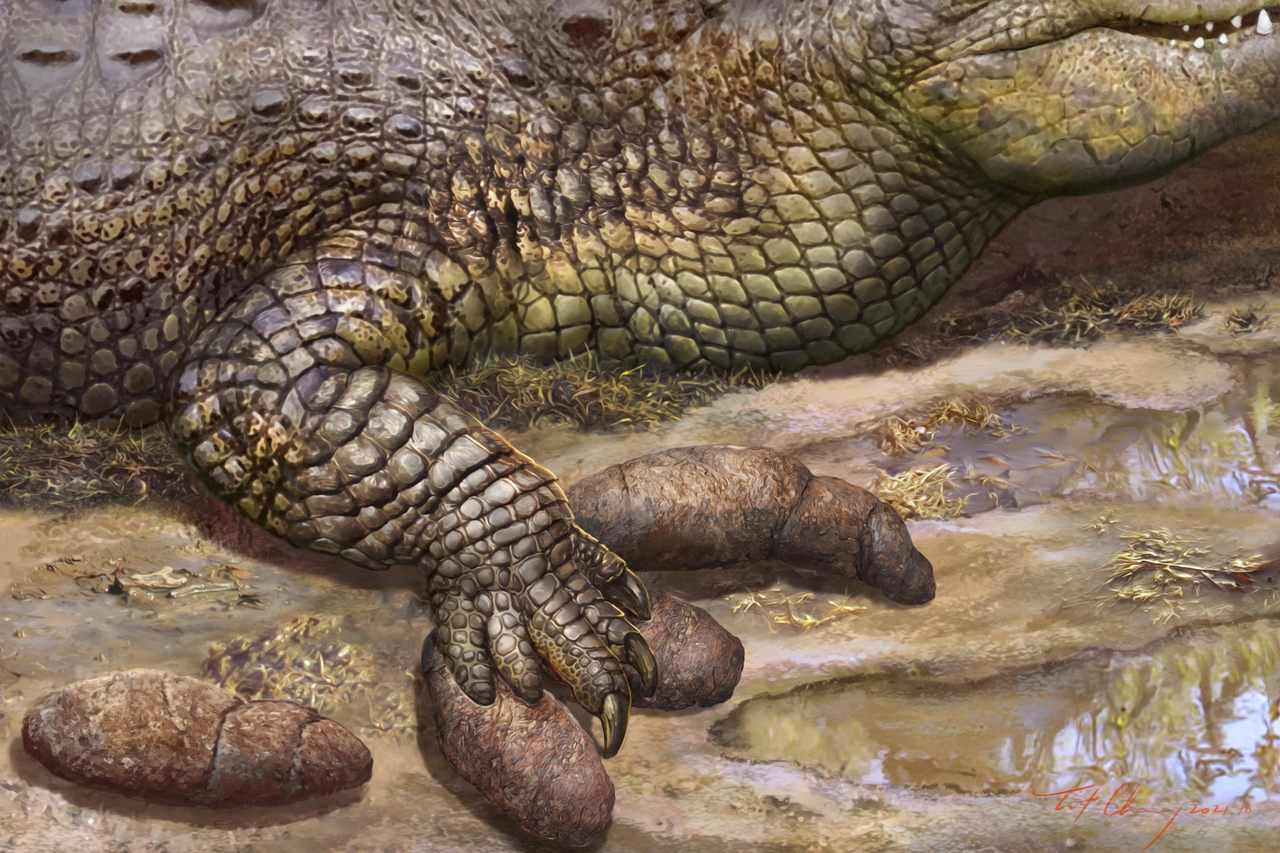 An artist's rendering of the moment an ancient crocodilian really stepped in it. Chung-Tat Cheung
In This Story
Destination Guide

Thirty-three million years ago, give or take, a crocodile stood on a shallow riverbank in what’s now Vietnam and took a dump. Then, it stepped in its own poop, leaving imprints of its long scaly fingers stamped on the turd, which was enveloped by the soft muddy ground and eventually became a fossil. To bring this ancient scene into focus, scientists had to push a car through a muddy coalfield, pop into an enclosure at a crocodile farm, and contemplate the difference, print-wise, between a foot and a penis.

The fossil itself just looks like a piece of poop, but made out of rock. It’s a couple inches long and vaguely American-football-shaped; to the untrained eye, the crocodilian footprint is barely visible. But “if you hold a lot of shit,” says Kazim Halaçlar, the lead author of an upcoming paper describing the fossil, “you notice something different.”

When people think of fossils, we often go straight to dinosaur bones, but broadly speaking, a fossil is any evidence of ancient life preserved in rock—things like footprints, burrows, and poop are all fair game. Over the last few decades, researchers have been paying more attention to fossil feces, or coprolites, and how they can advance our understanding of ancient animals and ecosystems. It’s what led Halaçlar, a paleontologist at China’s Institute of Vertebrate Paleontology and Paleoanthropology, to the Na Duong coalfield in northern Vietnam.

Na Duong is an active coal mine, but it’s also a treasure trove of fossils—the same swampy conditions that allowed for the transformation of decaying plant matter into coal also preserved crocodilians, turtles, and a shitload of coprolites.

It rained frequently while the researchers were there—Halaçlar recalls the scent of wet rock and dirt—making the coalfield slippery and muddy. Several times, the scientists had to get out to push their car. But despite the less-than-ideal weather conditions, Halaçlar returned to China with two suitcases full of coprolites—around a hundred total. As he sorted through them in the following months, one stood out: a coprolite with two side-by-side grooves in it.

Halaçlar wasn’t immediately sure that the indentations were part of a footprint, so he asked his friend Paul Rummy, another paleontologist at the IVPP, for his opinion. Halaçlar’s research focuses mainly on mammal fossils, while Rummy’s area of expertise is in reptile fossils; they’ve collaborated on coprolite projects before, almost like a hobby. “The only topic that Kazim talks to me about is coprolites, coprolites, coprolites,” Rummy jokes.

Halaçlar and Rummy suspected that the Na Duong coprolite might have been deposited by an ancient relative of today’s crocodiles—one that lived almost smack dab between the last dinosaurs and the first humans. To confirm that it really was a crocodile coprolite and not the poop of another animal (or just a singularly ugly rock), the researchers sliced a tiny section off the end of the coprolite using a diamond-tipped saw and then examined it using a scanning electron microscope and CT scans. It contained the telltale elements and minerals associated with the diet of a carnivore. While some coprolites contain bits of bone or even whole prey animals, this one didn’t show any such remnants. “The digestive tract of the extant crocodilian is so acidic, it dissolves the bones,” says Rummy. The same is true for prehistoric crocs, so the lack of bits and bones further cemented the croc poop hypothesis.

The team suspected that the grooves in the coprolite also came from a crocodilian, but they needed a reference to make sure. Rummy had been doing other crocodilian research drawing upon modern specimens from a farm in Beijing where crocodiles are raised for meat. “So I said, ‘Let’s go to the crocodile farm. You test the footprint out and see whether it works or not,’” recalls Rummy.

At the farm, Halaçlar found himself up close and personal with a full-grown Siamese crocodile inside its enclosure. “Just two seconds—she can kill me,” says Halaçlar. “I know I’m totally safe, but you can feel that this is a killer, just two meters away from me.” He snapped some photos of the crocodile stamping its foot in the dirt and got out of there.

The photo showed that the angle of a croc’s foot on hard ground doesn’t match the prints on the coprolite—a clue that the ground must have been soft and muddy. But by comparing the footprints of modern crocs to the tracks on the coprolite, Rummy and Halaçlar had a pretty good idea that they were looking at the fourth and fifth fingers on the front right foot of a six-foot-long crocodilian. There were initially a few other outside possibilities—Rummy and Halaçlar were asked by a reviewer of their paper to rule out the chance that the grooves on the coprolite were caused by another croc’s penis while he was attempting to mate with a pooping female—but the angle and the way the coprolite must have gotten buried all pointed to a croc footprint, likely the footprint of the very croc that produced it.

Halaçlar and Rummy’s detective work confirmed a snapshot of life 33 million years ago, down to the soft riverbank soil that the poop landed on moments before it got stepped on. Paula Dentzien-Dias, a professor at Brazil’s Universidade Federal do Rio Grande, who was not involved with the study, praises Halaçlar and Rummy’s work as “the real deal.” She says that finding a coprolite with a footprint on it is a rare and exciting find, because, “when you have feces that [were] stepped on, it’s probably the producer that stepped on it. That’s great for us who study coprolites, because we usually don’t have for sure the producers. So this is amazing.”

And that’s not the end of the story. An ongoing collaboration between Halaçlar and paleobotanists has revealed that the swampy riverbank area was likely covered by lotuses. Future collaborative work with paleobotanists and other researchers may one day recreate the entire ecosystem, helping us step into the past where a crocodilian really stepped in it.

The monstrous menace known as Whatcheeria hints that our distant ancestors may have been more like us than we thought.
science

But they didn’t eat our ancestors—probably.
dinosaurs

3:07
Want to see fewer ads? Become a Member.
From Around the Web
Atlas Obscura Trips
Vietnam: A Culinary Adventure from Hanoi to Saigon
View This Trip
Thanks for sharing!