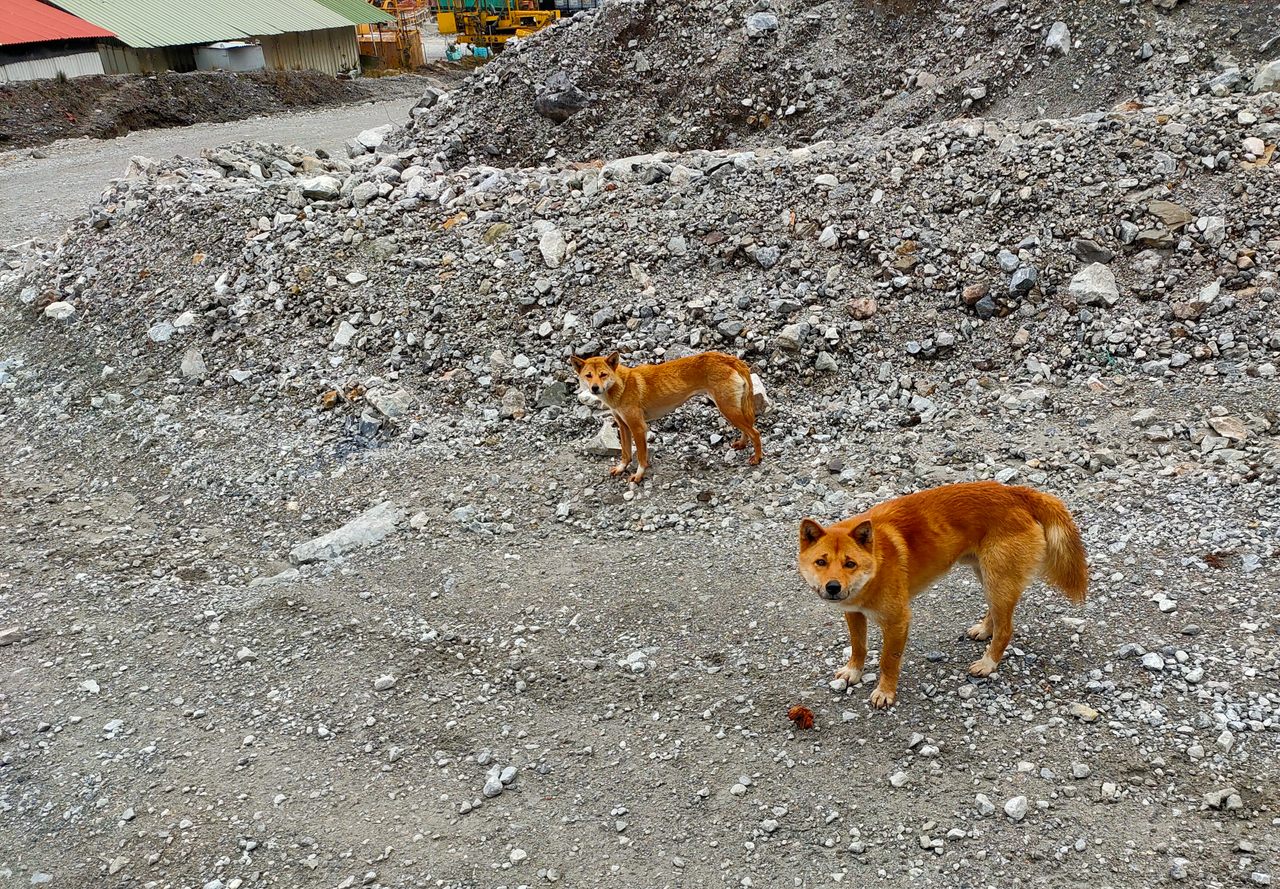 These singing dogs were recently found near a gold mine in Papua. Courtesy Anang Dianto

James McIntyre first heard about the singing dogs of New Guinea in 1996. More than two decades passed before he finally saw one in person. There were near misses before: anecdotal sightings, scatological evidence, camera trap snapshots, and the occasional eerie, prolonged vocalizations that give the animals their name all hinted at their existence.

But the breakthrough moment finally came in 2018, when McIntyre’s troupe of field biologists came across the canids at 14,000 feet, sniffing around a high-altitude gold mine on the western side of the island, in the Indonesian province of Papua. This was a shock: They were far from the lowlands that constitute their historic range, where previous expeditions had attempted to seek the dogs out.

Until recently, scientists weren’t sure whether these rare singing dogs still existed in the wild. But the high-altitude, copper-haired dogs that McIntyre encountered have now been confirmed as a novel population of the New Guinea singing dog, according to a study recently published in the journal Proceedings of the National Academy of Sciences.

McIntyre, a co-author of the recent paper and the founder and director of field research for the New Guinea Highland Wild Dog Foundation, captured some individuals temporarily, to collect evidence of their existence and to attach GPS tags to some of them. “In science you need to prove it, and you prove it with DNA,” McIntyre says. “We were able to provide some of the best canid geneticists on the planet with the tools they needed to ascertain what kind of dogs they were up there.”

One of those geneticists was Elaine Ostrander, a co-author of the study who works at the National Human Genome Research Institute, part of the National Institutes of Health. “When we look at modern dogs, New Guinea singing dogs share almost nothing with them,” Ostrander says.

New Guinea singing dogs are a unique branch on the canid evolutionary tree. They diverged from dingoes, the endemic wild dogs of Australia, as long ago as 1,200 generations back, according to the paper. They also have some similarities to domesticated East Asian and Arctic dogs. But the little-understood vocalizations of the New Guinean dogs set them apart. Researchers still don’t know why they sing, though it will likely be easier to study with an extant population to observe.

There are several hundred of the dogs in captive-breeding programs in the United States, but they all stem from eight originally captured dogs. Years of inbreeding has led to worrying developments, such as kinks in tails and smaller litter sizes. The existence of a novel population is a hopeful sign for the species.

“The conservation centers are becoming inbred, and inbred, and inbred. They can expand the population but they don’t have a lot of genetic diversity,” says Ostrander. If the wild dogs show genetic variations that their counterparts in captivity lack, Ostrander says, “that’s going to be really important for saving the species.”

Ostrander’s team scoured 170,000 different positions on the dogs’ genome for similarities with other canid populations around the world. (The NIH repository hosts over 30,000 samples of dog DNA.) They found that the dogs by the gold mine, referred to in the paper as “highland wild dogs” were a genetically diverse group of New Guinea singing dogs, and potentially the type of dog from which the captive individuals descended.

Because of the coronavirus pandemic, McIntyre’s team isn’t planning to return until May 2021. When they do, they hope to gather samples that will inject new genetics into the captive populations in the United States. With that little boost, McIntyre says, perhaps the dogs can sing something other than a swan song.

A surprise discovery from Haiti may finally reveal how some famous feral horses got to a distant barrier island.
islands

Scientists, residents, and visitors have banded together for a massive biodiversity survey of British Columbia's Galiano Island.
islands

Scientists hatch a bold plan to save Brazil's critically endangered golden lancehead, which lives on a single infamous isle.
subterranean

Thought for decades to be extinct, the tiny animal has stayed hidden in a former subterranean speakeasy.
Video • Object of Intrigue