The Northernmost Island in the World Was Just Discovered by Accident - Atlas Obscura
Want to see fewer ads? Become a Member. 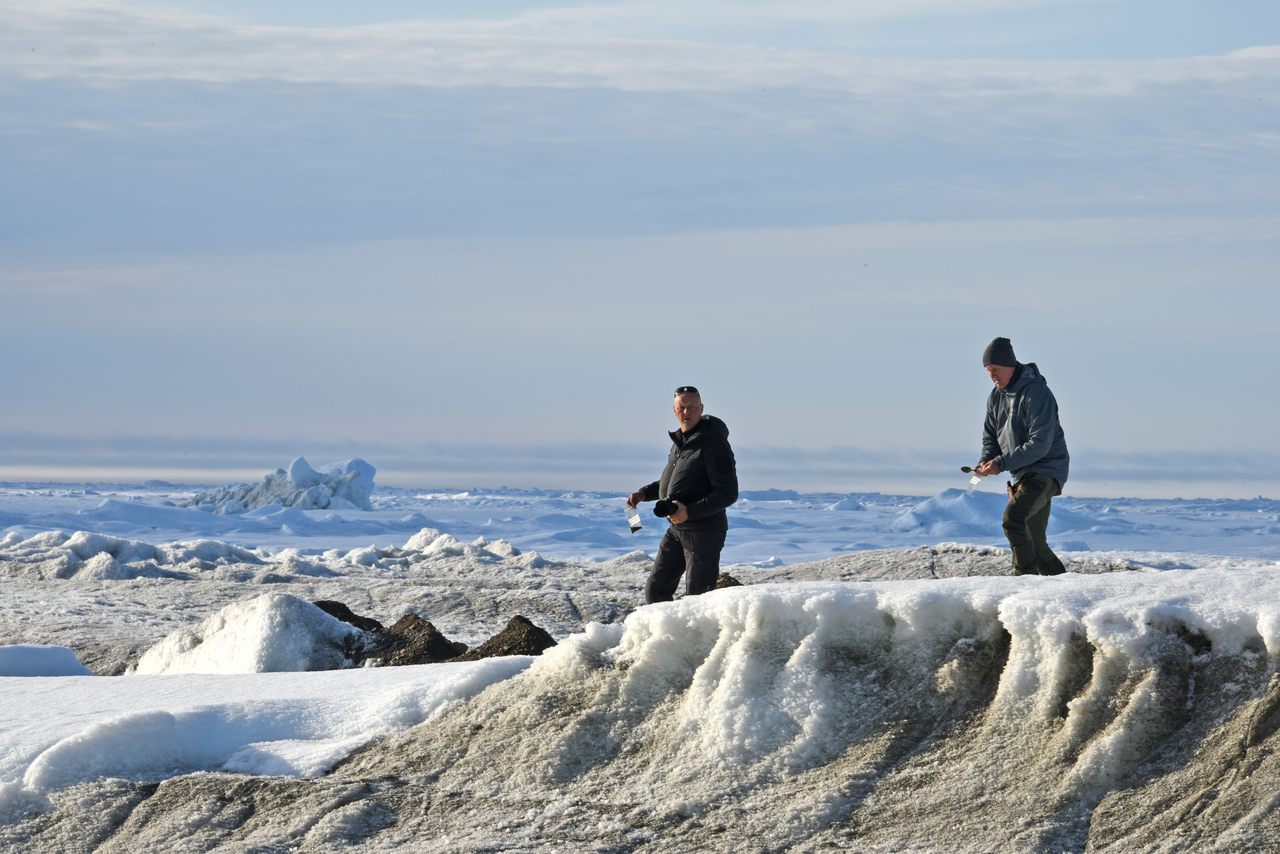 Researchers took samples from the new island during a July 2020 expedition. Morten Rasch
In This Story
Destination Guide

When a team of scientists from Switzerland and Denmark landed by helicopter on a small island off the northern coast of Greenland in July, they didn’t think much of it. It was just “one of a hundred sites” the team visited, says expedition leader Morten Rasch, while collecting samples for themselves and other scientists around the world. They had had a hard time finding their destination—called Oodaaq Island—but eventually were able to land and spend about 15 or 20 minutes before taking off again. “It was nothing big for us,” says Rasch, of the University of Copenhagen. Except they weren’t on Oodaaq at all, but a previously undocumented island that now holds an interesting distinction that Oodaaq once held: the northernmost landmass in the entire world.

They didn’t realize it for some time. It was only later that Danish journalist Martin Breum, who accompanied the expedition, was going back through his notes and realized the team had been some 80 miles north of Oodaaq, in a place where there wasn’t supposed to be an island at all. When Breum called Rasch to tell him the news, “I didn’t pay much attention to it,” says Rasch with a laugh. He was, after all, in the middle of his busy season at the research station in Qeqertarsuaq, the small Greenland town where he lives. But when Breum published an article about the discovery in a Danish newspaper, suddenly “there was a lot of interest,” says Rasch. Since then, he has been fielding calls from journalists from all over the world drawn by the story of the mysterious new island discovered by accident. “It’s funny, now my friends call and say ‘Morten, you have become world-famous!’ and I just say to them ‘Yah, and I just need some sleep.’”

The new island isn’t much—about 100 by 150 feet and about 10 to 13 feet above sea level—but it’s still unclear how it went undetected. Stephen Royle, an emeritus professor of geography at Queen’s University Belfast and author of Islands: Nature & Culture, explains, “Well, [the island] might’ve been covered by pack ice or … maybe it’s only been recently formed by storm events.” Rasch agrees, stating that “many of these features are snow-covered,” and in a place so remote that it’s no surprise that no one would stumble across it.

This also means that the still-unnamed island might not be long for this world. “These islands are ephemeral,” says Rasch. “The area north of Greenland has a very low water level… [and] a lot of sea ice, and if there’s a strong wind from the north, then all of this sea ice gets pressed towards the shore, and then every once in a while it’ll grab the sea bottom and bulldoze [it] toward the shore and then these islands are developed.” This phenomenon, known as ice pressure ridges, is a frequent occurrence in Greenland. It’s likely how Oodaaq formed as well, albeit a very long time ago.

New islands emerging from the depths of oceans is actually a fairly common phenomenon. “The Earth is terribly active in geological and geographical terms,” says Royle. “Land pops up above the water, sometimes it stays, sometimes it doesn’t.” Earlier just this month, a new island surfaced off the coast of Japan due to volcanic activity.

Climate change is causing cataclysmic shifts in Greenland—Rasch has watched the glacier in his own backyard, Sermeq Kujalleq, shrink year after year. These shifts are likely to impact the entire world but do not appear to have anything to do with the emergence of the new island. “I can say, 100 percent sure, there is no climate change connection,” says Rasch “It’s a very natural phenomenon,” says Rasch. But climate change may actually allow this new island to survive, he theorizes, if there’s less drifting sea ice to plow it back below the waves.

When asked about all the attention the new discovery has received, Royle reflects on how much there still is out there to find: “Here we are in the 21st century, with all the technical kit we got, and, look, here’s something that’s never been discovered before.”

In the aftermath of an extreme melt event, what do scientists see in the Greenland Ice Sheet’s swirls of white, blue, and ominous gray?
islands

No one is sure how this geological oddity got there.
maps

The recent discovery of the world's northernmost "island" recalls the groundbreaking work of the international Polarfahrt team more than 90 years ago.
science