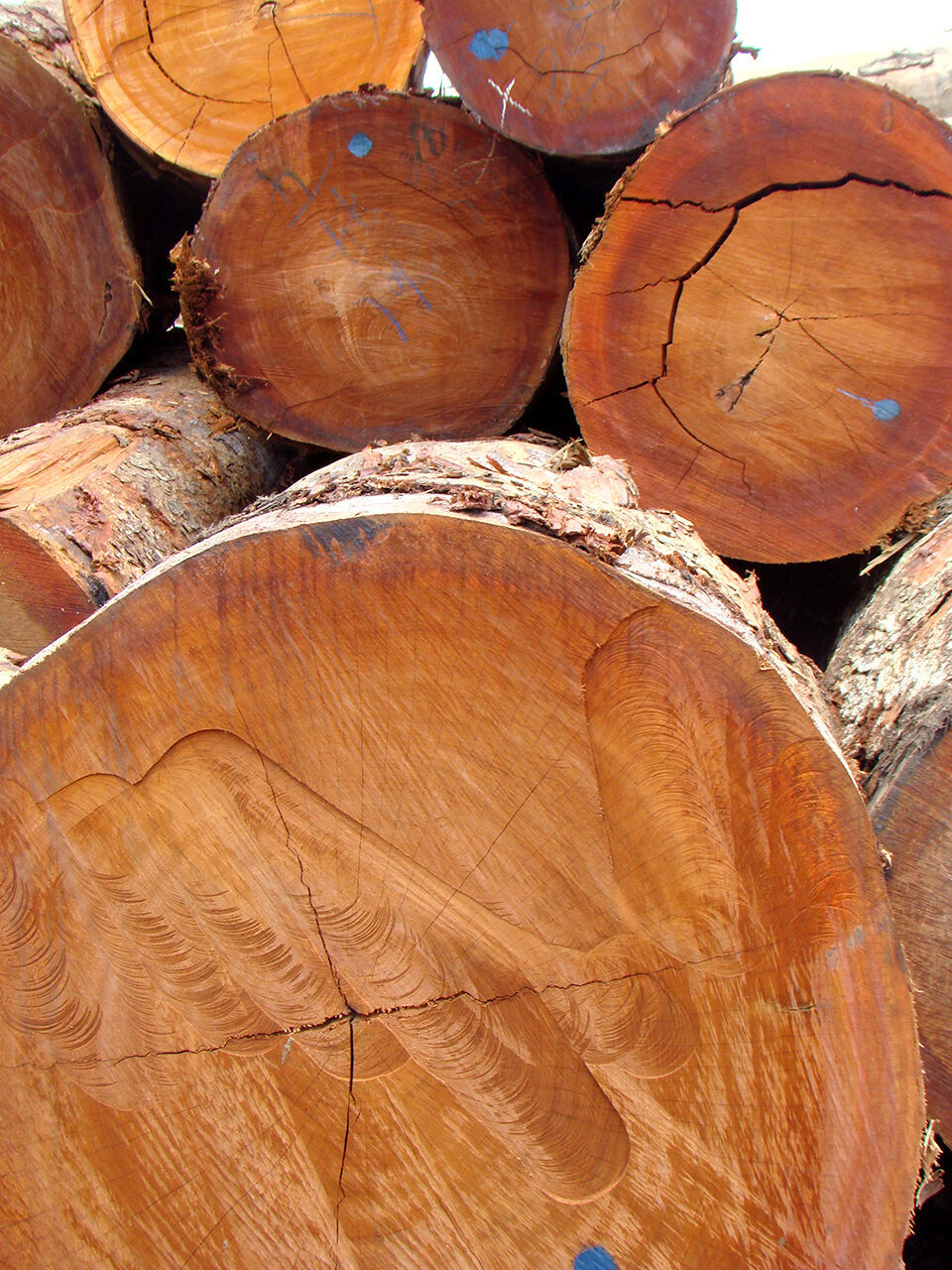 When Marc Ona Essangui was a baby, he was placed under the spiraling canopy of a kevazingo tree. His mother and father said a prayer over their child—an old prayer muttered for decades by parents in Mbolenzok-Njouh, a village located on the northern tip of Gabon. They prayed for their son’s good fortune, and for the protection of an ancient power hidden deep within the tree—the same power that had protected their home and village for as long as they could remember.

In Gabon, a small coastal West African nation, forests are dense. Roughly 88 percent of the country’s land area—56 million acres—is covered with trees, many of which serve distinct traditional purposes for more than 40 rural villages populated with native ethnic groups.

But no tree in this verdant landscape is as widely revered as kevazingo, which is native to countries across equatorial Africa. Also known as bubinga, amazique, and African rosewood, it has as many names as it does traditional rites around it—crushing its leaves in a salve to spiritually cleanse wounds is just one—and as many rites around it as there are ethnic groups in Gabon.

“The history, name, and use of the kevazingo tree is dependent on each rite,” says Apollon Obolo, who was born in a village called Yia in the eastern Haut-Ogooué province. “It is a tree very respected in all the traditions of Gabon.”

Kevazingo trees have veiny trunks with brownish-purple bark. The tallest ones can stretch up to 200 feet (60 meters). Large roots, sinuous and thick, form buttresses around the base. Though not particularly smooth or elegantly shaped, the kevazingo has a grandeur that matches its height. Growing up, Ona remembers being awestruck by the sheer size of the tree: “Beautiful or not,” he would think, “that is very big.”

Kevazingo trees can also live for more than 500 years, outlasting generations of villagers. Most indigenous groups in Gabon consider the trees as integral to community culture as temples or rivers are—and nearly as permanent. In years past, village chiefs and kings were crowned under kevazingos. Today the bark is used in a healing rub for conditions that include cysts and sexual impotence.

This past February, 392 containers of raw kevazingo wood were confiscated at the Gabonese port of Owendo.

Such seizures are not uncommon. Luc Mathot, the founder of Conservation Justice, an NGO that works with Gabon’s government to monitor the illegal wood trade, says that it’s rare to find a logging company in Gabon that is completely clean, due to the country’s complex laws, which are both strict (the wood must be processed domestically before it’s traded internationally) and ephemeral (kevazingo trade is often banned temporarily, most recently in 2018).

The primary catalysts of the illegal kevazingo business, however, are Chinese companies. The reason for this boils down to a physical similarity. Kevazingo wood, when processed, looks remarkably like wood from trees in the rosewood genus, Dalbergia (kevazingo belongs to the genus Guibourtia), which are used to make a type of Chinese furniture called hongmu (loosely translated as “red wood”).

Hongmu chairs, cabinets, and beds were crafted for royalty during the Qing Dynasty out of rare rosewood trees from India and Southeast Asia. Today, intricately designed hongmu tables and bed frames can sell to the nouveau riche for more than $1 million (in U.S. dollars).

This demand has created a logging industry that is decimating forests in Myanmar, Madagascar, and Indonesia, among other countries. Between 2005 and 2014, 35 percent of illegal wild-commodity seizures were of rosewood—almost twice that of any other illegally traded wild commodity.

The business can be violent too. Rosewood is referred to as “blood timber” in parts of West Africa. In the early 2010s, more than 150 people were killed in Thailand during rosewood enforcement operations.

As they’ve logged rosewood trees to near commercial extinction, Chinese lumber companies have started looking for trees that are very close to the national standard of hongmu, but don’t quite meet the mark. Hongmu knockoffs, in other words. Like kevazingo.

The number of kevazingo trees in Gabon is not well known, but recent local surveys show about three kevazingos for every hundred trees in the country. This makes them relatively uncommon, though by no means rare. Yet even one kevazingo tree, because of its size and potential age, can play an integral role in the functioning of an ecosystem—particularly one as diverse and complex as a Gabonese forest.

Kevazingo can be as important to the populations of organisms that rely on its presence to survive—like the symbiotic fungi that attach themselves to the tree’s roots—as it is to the communities of indigenous people in Gabon, who hold a deep belief in the tree’s powers.

When he was “very, very young,” Ona says his father “explained to [him] that it is important for our children to play not far from kevazingo, because the tree can protect them.” This protection is akin to what Ona’s parents prayed for when they stood over their newborn child—the same protection that prompts a number of indigenous groups to call kevazingo trees the “guardians of the forest.”

Now in his 50s, Ona is the founder of an environmental NGO called Brainforest. Seated in the wheelchair he has been in since he developed polio as a child, Ona looks up at the forest canopy with a broad, friendly face. He says that every Gabonese village “has its own kevazingo.” His own village, Mbolenzok-Njouh, has two.

When the 392 containers of unprocessed kevazingo—estimated to be worth over $250 million—were confiscated by the Gabonese government in February, a Chinese businessman named Francois Wu became the prime suspect. According to Luc Mathot, Wu’s company, 3C Transit, frequently mislabels unprocessed wood as processed and kevazingo as okoume, a regularly exported wood from a less protected tree. Aside from the sheer size of the load, however, the operation was fairly routine.

The Gabonese government was humiliated. It’s one thing for a law to be broken. It’s another for a law to be broken twice in a row, the second time right under your nose. In May, Gabon’s president, Ali Bongo, fired his vice president, Pierre Claver Maganga Moussavou, and his forestry and environment minister, Guy Bertrand Mapangou. Bongo didn’t explain why he sacked the cabinet members, but local and international speculation pointed toward the scandal, which some people started calling “kevazingo-gate.”

Wu denied any involvement, but he hasn’t returned to Gabon since the 392 containers were confiscated.

Just days after the 353 illegal containers of kevazingo vanished, 200 of them were found on the properties of nearby shipping companies. Thousands of kevazingo trees stolen from the land, then confiscated by the government, then stolen back, then re-confiscated—it was an astronomically high-stakes ping-pong game, with hundreds of millions of dollars bouncing around.

But beyond the political and economic implications of the scandal is the damage that such unchecked logging can do to Gabon’s finite kevazingo population. Even based on the most conservative estimates, the number of kevazingo trees being consistently shipped to China is unsustainable. The reverberations of such a population decline will be felt by every kevazingo stakeholder, from the organisms in the Gabonese ground to the bed frames in Chinese households to the indigenous people who rely on the tree’s protection.

In the wake of the scandal, Gabon has banned all logging and trade of kevazingo. Today, 153 containers are still unaccounted for.

Apollon Obolo is a member of the Bwiti Missoko, an indigenous group in Gabon. He was initiated under a kevazingo tree, which the Missoko call bovenga. Bovenga is used in a number of celebratory, medicinal, and protective rituals, similar to the one that initiated the newly born Ona in Mbolenzok-Njouh.

The president of a youth-development group and a promoter of cultural events, Obolo says that to the thousands of indigenous people living under Gabon’s twisting kevazingo canopies, the wood transcends any tangible value. How do you assess the worth of trees that have protected villages for decades, provided a safe place for children to play, and allowed communities to thrive?

When asked what Gabon would look like if all the kevazingo trees were cut down, Obolo responds, “Dibôkô!”—an “expression of stupefaction” in the Missoko language. Then he repeats the question: “This country without kevazingo?”

To him, it’s unimaginable.

Archaeologists in New Mexico are studying past wildfires through tree rings and pottery sherds.
forests

Dendrochronology doesn't just work on forests. It works on buildings too.
Video

A Forest of Furniture Is Growing in England

A decade-long plan is finally approaching fruition.
Read more
Thanks for sharing!