A Day in the Life of a Galápagos Guide - Atlas Obscura
Want to see fewer ads? Become a Member. 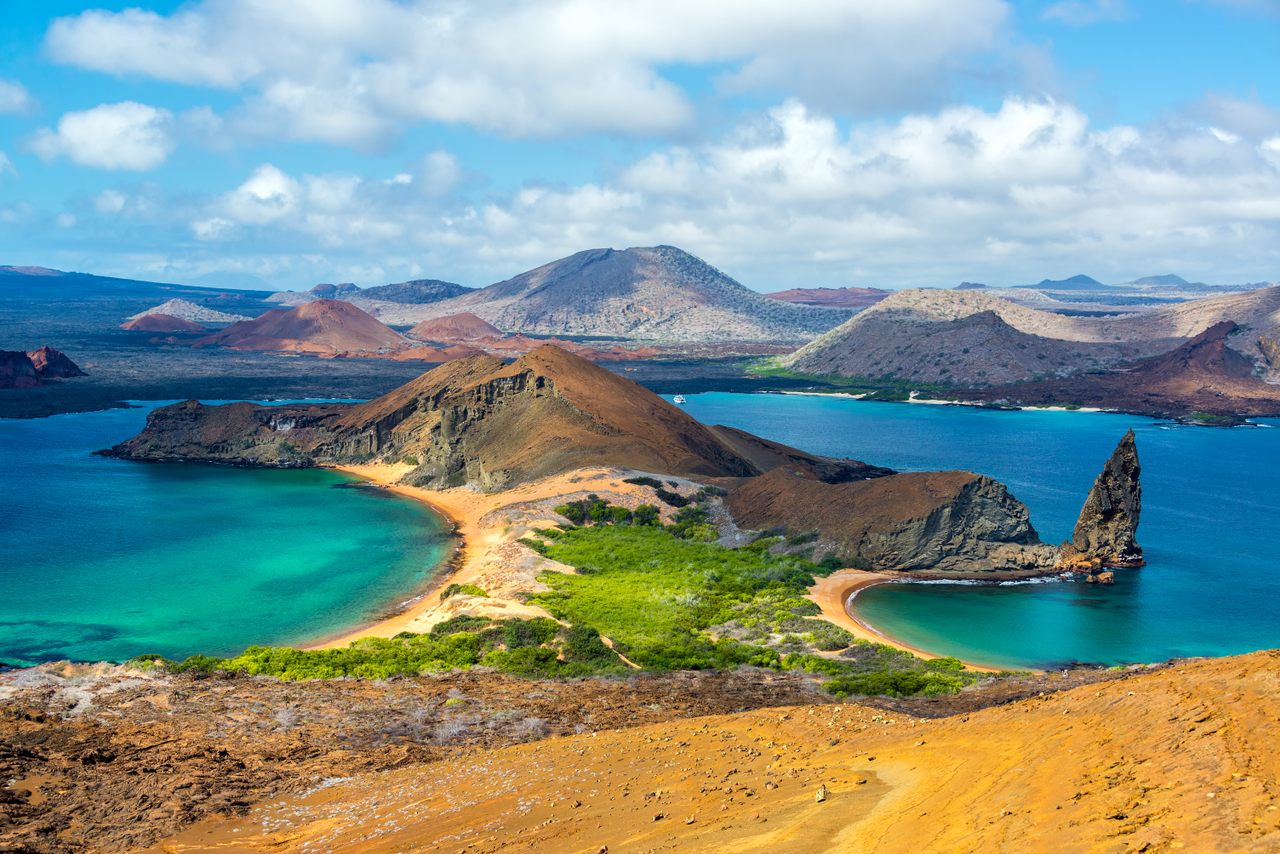 A scenic view of two beaches in the Galápagos. Jess Kraft

We’re working with Chase Sapphire® to tell stories about experiences in places near, far, and-in-between, like this one in the Galápagos.

On a cloudy day this past July, a group of tourists in Santa Cruz, Galápagos, walked single-file along a path toward a mud pit. They were excited to see some giant tortoises, who like to gather in the muck. They were so excited, in fact, that they barely noticed as one of the massive animals joined their line, huffing impatiently. It turns out tortoises like to take the paths, too.

The group’s guide, 30-year-old Luis Yanez, calmly gestured for everybody to move back, and the tortoise lumbered ahead unhindered. The rules of the Galápagos National Park dictate that people should stay a solid six feet from wild animals: pretty easy in the rest of the world, but surprisingly difficult here. “You should respect the two-meter distance,” Yanez mused later, remembering this moment. “But the animals don’t know that.”

As a naturalist guide in one of the world’s most beloved ecotourism destinations, Yanez spends his days mediating between people and even wilder creatures. No two days are alike: Once, he spent hours playing monkey-see monkey-do with a pod of sea lion pups. (“I went almost a minute without breathing,” he says.) But he agreed to talk us through a “typical” 24 hours.

Atlas Obscura will be taking another group of travelers to the Galápagos next year. Yanez offers a preview of what guests might expect.

Exploring the coast in the morning

Yanez generally starts work at about 8 or 9 a.m., but he likes to get up around 6 to prepare for the day. He’ll drink coffee (“we produce really good coffee”) and put on his work uniform, safari khaki with an official Galápagos National Park patch. “By the time I get [to work], I’ll be really awake,” he says. Then the group will take off, ready for its first adventure.

Three different ocean currents converge around the Galapagos Islands: cool, nutrient-rich water from the south mixes with warm water from the north and a cold jet from the west. This combination has given rise to a variety of unique ocean creatures. Nearly one quarter of marine animals in and around the Galápagos can’t be found anywhere else in the world.

Yanez likes to take his groups snorkeling or kayaking so they can see this for themselves. The morning is a great time to go out to the Itabaca Channel, a busy spot between the islands of Baltra and Santa Cruz. Beneath the water, black-tipped reef sharks weave between the mangrove roots, and brightly colored pufferfish chug along the bottom. Lucky snorkelers might even see a blue-footed booby take a plunge. “They’re one of the most beautiful animals that we have,” Yanez says. “So aerodynamic—they can dive up to [200 feet].”

Above the surface, water taxis bring people between the islands. Many are converted fishing boats, signs of the archipelago’s changing economy, which is now heavily focused around ecotourism. In Yanez’s generation, “we are really conscious about everything,” he says. “About recycling, about being respectful of nature.” Responsible ecotourism is a large part of that, and every tour group that enters the Galápagos must be led by a local guide.

Hiking in the highlands in the afternoon

Over lunch—generally soup followed by local fish and produce—Yanez gives a short talk about what the group saw in the morning. Naturalist guides in the Galápagos have both broad and deep knowledge: before they can even go to training school, applicants must study for and pass a three-hour entrance exam. After that, they undergo a rigorous five-month course on subjects ranging from physics to biology to history and culture. Only permanent residents of the Galápagos—of which there are about 25,000—are allowed to apply.

Yanez himself is a third-generation Galapaganean. When he was growing up, he says, he thought guides were “like superheroes.” When the opportunity arose to become one, he jumped on it. (The job requires constant learning: When we spoke, Yanez was in Montreal, finishing up an intensive French language course.)

In the afternoon, he might take his group hiking in the highlands to see the giant tortoises, some of the islands’ most impressive creatures. “You can see them really soak in the sun,” he says. “It’s cool to just hang around them.” Galápagos tortoises often live for more than a century, and they spend most of their time napping: good creatures to have around when you’re on vacation.

If the tour group has good energy, they might see one of the archipelago’s less well-known, but equally fascinating denizens. On a recent visit to the highlands, Yanez’s group nearly tripped over a Galapagos short-eared owl, known for its unusual hunting behavior. Sometimes, he says, they even see a humpback whale jump.

Bonding and bird-watching in the evening

Because the Galápagos has such a variety of creatures and ecosystems, groups often travel from place to place. Transport time is a great opportunity for people to get to know each other. “The Galápagos is a beautiful place to meet people,” Yanez says, recalling some of the lessons he has learned from his companions. “Everybody on the tour has something important to share.”

In the evening, the group may switch locations to Floreana: a hill-topped island that once served as a stopping point for pirates. It’s now home to a small community of 150 people, who get their electricity from solar panels and farm much of their own food. Animals are attracted to the island’s freshwater spring, a rare resource in the Galápagos.

After a hike around the island’s abandoned caves, Yanez may take his group to a pond, where magnificent frigatebirds—which spend most of their time at sea—dive to rinse the salt off of their feathers. “Going to Floreana is like going back in time,” he says. “In this global world, you want everything and you want it now. [But] you don’t need that much to be happy.”

After dinner, Yanez heads home. He might read a scientific article, to make sure he’s ready for the next day’s activity, and then he’ll go to sleep. The group may be living that slower island life—but he’s still going to get up at 6.

Take a rare opportunity to step inside the hidden world of L.A.-based fashion designer Peter Lai, with an incredible private tour lead by the artist himself.
Sponsored by Chase Sapphire
ecuador