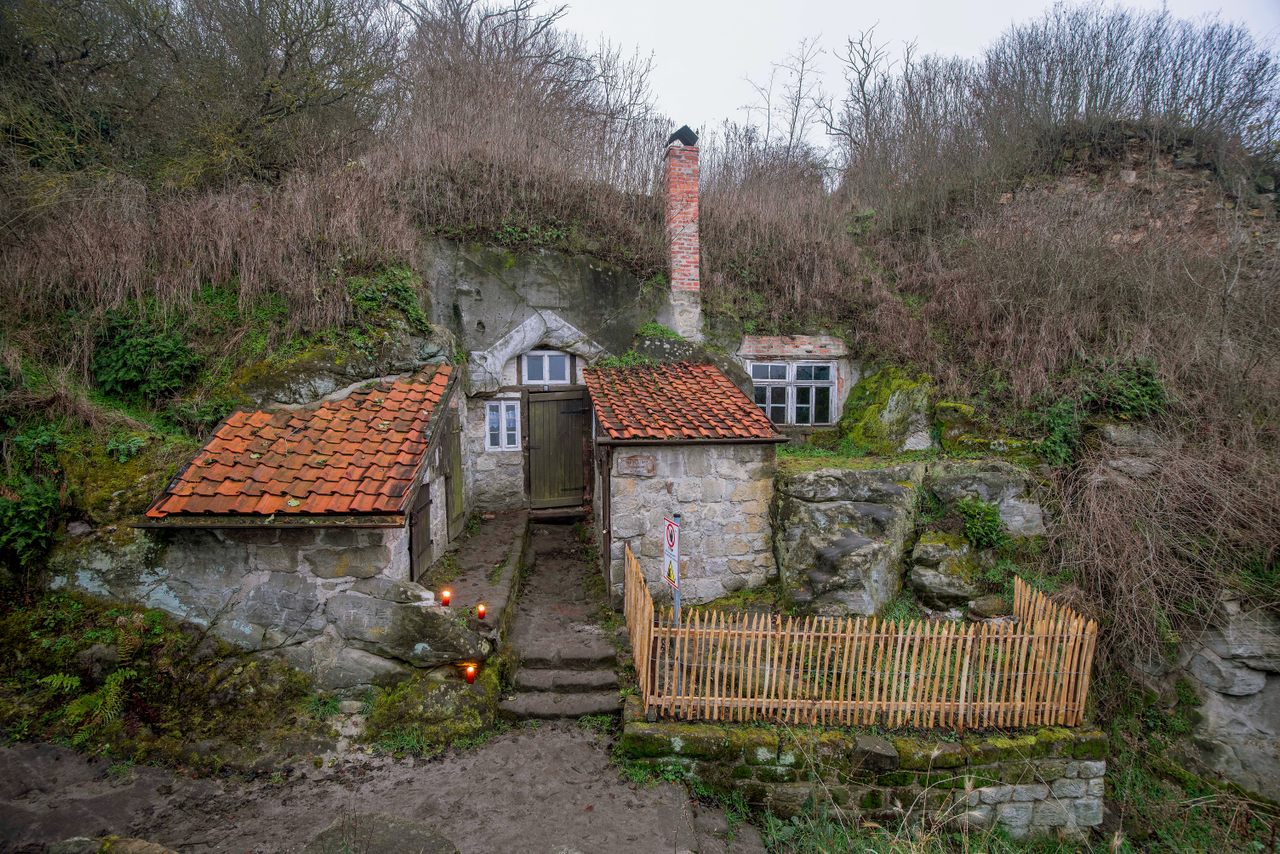 A few well-preserved cave dwellings remain in Langenstein, carved with hammer and chisel in the mid-19th century. Stephan Schulz/picture alliance via Getty Images
In This Story
Destination Guide

Helmut Scholle pushes open the narrow wooden door flanked by small windows and ducks his head as he steps into the cave. Behind the simple rocky exterior is a home, complete with distinct rooms, a chimney, and cozy furniture. Two things become obvious. Despite the frigid winter air, it’s relatively pleasant inside. And the marks on the rugged walls—signs of repeated chipping and chiseling—indicate that this home required a monumental human effort to make. The cave, Scholle reveals, was carved into the rock by migrant farmworkers in desperate need of housing.

In 1855, a cluster of cave dwellings like this one were made in Langenstein, a village of around 2,000 inhabitants in Halberstadt, near Germany’s Harz Mountains. Five of the 10 caves have been carefully preserved and are now open to visitors. Scholle, a member of the Langensteiner Höhlenwohnungen association, offers regular tours of these curious quarters. These aren’t the first such cave homes in the region, he notes, pointing to a mountaintop in the near distance where the castle of Langenstein—the Altenburg—once stood. “There were natural caves there that people lived in from around 1787 until 1916, with postal addresses and everything,” he says. “Those were our first inhabited caves.” One of the Altenburg caves, too, has been preserved and is open to the public.

Germany underwent rapid industrialization and urbanization during the 19th century. At the same time, the population more than doubled, and land seizures and unemployment were widespread. Alongside emigration, internal migration rates rose dramatically, and rural people moved frequently in search of secure livelihoods. Social historian Leslie Page Moch, who specializes in the history of European migration, writes in a paper published on European History Online (EGO): “Population growth and proletarianization had clear implications for migration, since the landless were the most willing to move and most affected by rural crises.”

In the middle of the century, the Langenstein manor and neighboring land was owned by the Rimpau family. August Wilhelm Rimpau was a notable agriculturalist and politician who expanded the farm considerably, says Scholle, and sought laborers to come work for him on a long-term basis. Farmworker families were easy enough to find, but in the midst of a housing shortage, there was no place for them to live.

“That’s when the local council came across the soft sandstone ridge formation on the outskirts of town. Because they knew about the earlier cave dwellings, the idea emerged of letting the workers reside in caves,” says Scholle. Soon after, the rocks were numbered—one to 10—with chalk, and a lottery was held to determine which families would get a spot. “And then each family got started with carving a home out of solid rock,” he says.

The migrant workers arrived in Langenstein from near and far, says Scholle. In exchange for a little over a month’s salary, they were granted the right to reside in the homes they built for as long as they lived.

“The workers spent all day on the fields, and in the evening they worked on their homes,” he says. On average, each family took a year and a half to complete their dwellings. In the early stages, they slept under makeshift roofs at the entrance. “The sooner you constructed your house, the sooner you were out of the cold.”

Inside the cave, the porous sandstone shielded the residents from the rain and cold. “Rain … would seep into the sandstone, but the water would be stored in the pores rather than rushing through the rock,” says Esther Czymoch, a geologist working with the Harz Regional Association. “Heated air would be perfectly stored inside the rock, thus maintaining a nice temperature and resulting in the cave being a … cozy place to live in.” And because the caves were south-facing, they received some sunlight.

The families furnished their 323-square-foot caves with basic furniture, and used tallow lamps for light and firewood for cooking. They were inventive, building shoehorns, mixers, churners, and other apparatuses out of wood, and roasting barley for coffee. The chimneys were offset from the kitchen areas, says Scholle, to ensure that heat from cooking would be retained indoors for long periods of time. A rudimentary dry toilet was installed outside.

The last of the cave dwellers died in 1910. “Ownership was not transferred to their descendants, so [the caves] became property of the municipality,” says Scholle. Subsequently, they were used as storage cellars until German reunification in 1990, or bought by individuals who built regular houses in their place. One cave was filled with concrete and a new house was built on top.

Today, Langenstein’s historic cave dwellings are cared for by the Langensteiner Höhlenwohnungen, a registered organization that consists of 10 dedicated members from the area, including Scholle. Until 2010, the group functioned as a simple collective. They now operate from a building that was constructed at the site of a former cave dwelling. It is owned by the municipality, and the association gets to use the space free of charge. “Mainly because we realized we needed to provide toilets for visitors,” Scholle says with a chuckle. Regaining seriousness, he elaborates on the need for the collective. “At the time, there were residents that began using the caves as a landfill site. These caves are such a unique feature of the German-speaking world, and we decided that we had to preserve it for all those that come after us.” Scholle says that the cave dwellings are quite popular. “There have been a number of films and television shows set here. And recently, a young man even made a TikTok video about it,” he says, a hint of amusement in his voice. He has hosted guests from around the world.

Curiously, but for entirely practical reasons, the cave dwellers let their livestock graze on the roof. “At the time there were no landscape architects available here, you see, so the goat was the architect,” says Scholle, with a laugh. “The animals prevented vegetation from growing, which would have otherwise caused the ceiling to collapse.” There’s even a catchy saying about it: “In Langenstein, in Langenstein, da schieten de Schaape in Schornstein rein.” In Langenstein, in Langenstein, the sheep shat into the chimneys.