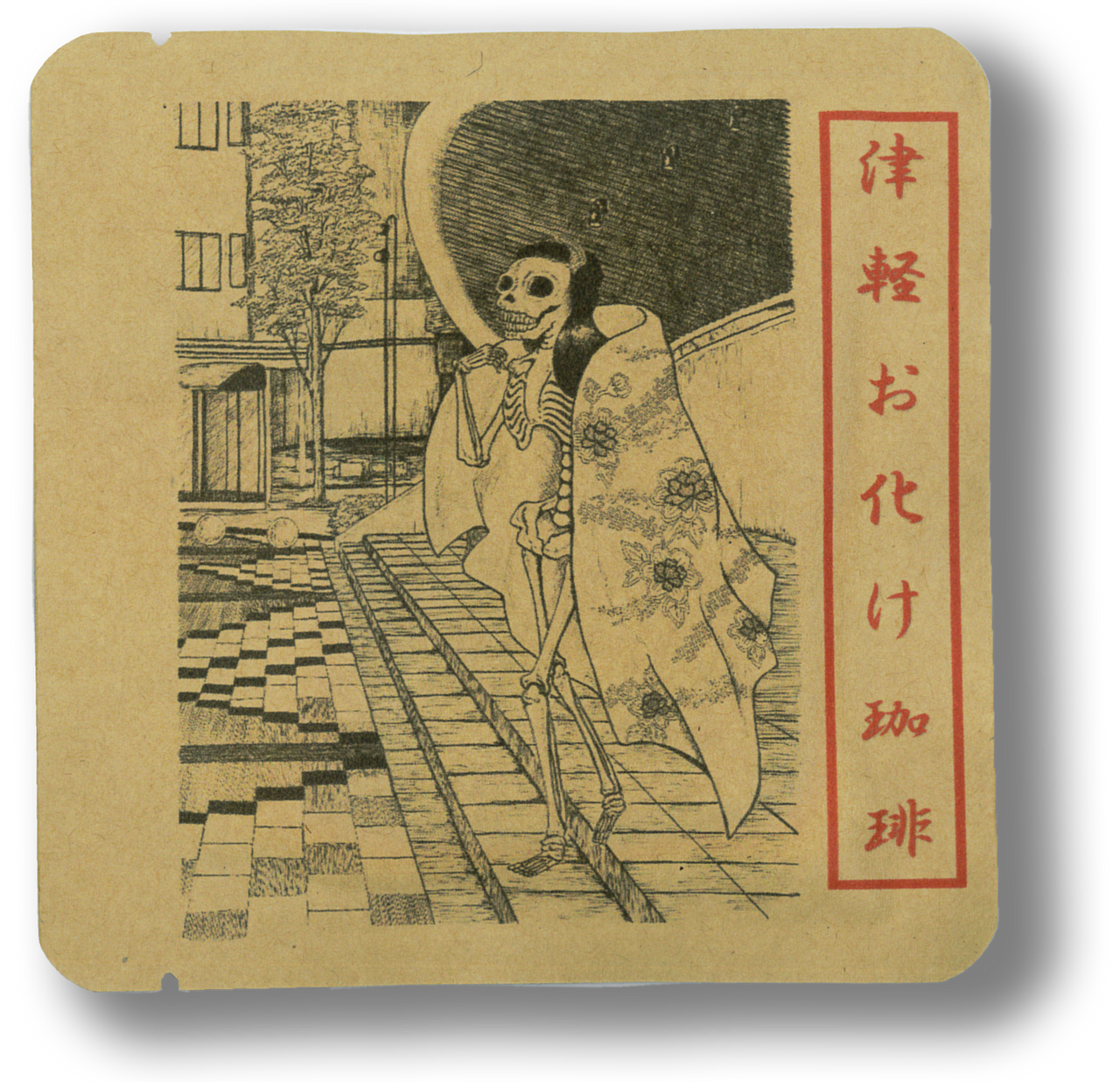 Bone Woman is one of the yokai in the "Haunted Coffee" collection. Tsugaru Net/Illustrator: Yoshimaru Sasaki

“In August, this area is packed with people visiting their ancestors’ graves,” notes our taxi driver as we pass through the temple district in Hirosaki on the way to the castle grounds. There are more than 50 temples between the adjacent neighborhoods of Shinteramachi and Zenringai, where 33 Zen temples dating from the 1600s stand shoulder to shoulder. It’s also a city full of specters, at least according to a popular local souvenir, “Tsugaru Haunted Coffee,” which draws on supernatural legends from Japanese mythology. Each packet depicts a ghost or monster haunting different parts of the city.

The single-serving drip coffee sachets are carefully packed by hand by Tsugaru Net, a “B-corporation” social enterprise in central Hirosaki that provides employment opportunities for people with physical, intellectual, and mental disabilities. Takeshi Kitaoka, the president of the 30-worker operation, says they knew they wanted to make a coffee product, but had no idea about the design or branding. Then he was introduced to Yoshimaru Sasaki, a reserved local illustrator.

Sasaki’s series reimagines the city as one teeming with ghosts and spirits: crying in abandoned houses, wandering the parks, dancing in the streets, stalking the red light district, wreaking plague, and causing trouble. The spirits are both mischievous and malevolent—some are content to play tricks while others threaten to bring misfortune or pull you underwater. Together, the more than 50 tales form a ghost map of the city, attaching an eerie shade to familiar sights and reminding people of a half-forgotten oral history passed down in hushed tones and ominous warnings.

Written during the Heian Period, the One-bite Demon’s name derives from its reputation to kill and devour humans in one bite. It can devour a large (concrete) apple from the row of apple posts along the train station embankment in one bite, and with its giant fangs, it looks like it can crush rocks.

“I’ve liked yokai [supernatural creatures] since I was little,” says Sasaki. “And I’ve liked drawing since I was young, but I wasn’t very good with scenery, so I practiced that. Then I wanted to add something to the scenery, and that something was yokai.” Kitaoka saw Sasaki’s work and was impressed with the level of detail.

Kitaoka says that it’s important that disabled people be integrated and equal members of the community. Many of Tsugaru Net’s projects are community oriented or have an aspect of hometown pride—other jobs include picking Hirosaki’s famous apples and doing Tsugaru-nuri, a traditional lacquer handicraft. So with Sasaki’s work as inspiration, they hit upon combining local ghosts and spirits with Hirosaki settings.

Amid the long hair on the back of her head she has another insatiable mouth. According to Tohoku folklore, her true identity is a Yamanba, a mountain witch. The freshly harvested apples look so good that she can’t help herself and greedily munches them.

“I used Aomori’s folklore as background,” says Sasaki. “If we look at our local area, there are a lot of legends. Even in the immediate neighborhood, I found that there were stories that I didn’t know about.” Many of the illustrations depict a legend tied to a certain place, while others are regional spirits that Sasaki matches to a likely location.

“Aomori seems to have a dark image,” says Kitaoka. Historically, the prefecture was remote and sparsely populated, the isolation exacerbated by bitter winters. “Hirosaki is a strange place. There’s Hirosaki Castle, and there’s the area with a cluster of temples of all different denominations on one road. It’s a place with old things, it’s eerie. There is a spooky quality to being in the hinterlands of Japan. There’s a place called Osorezan in Shimokita Peninsula where deceased souls reside.” Ozorezan, which means Fear Mountain, is actually an active volcano with a Buddhist temple in the caldera, said to be a gate to the underworld.

This giant is so big he can climb over mountains, but there’s nothing harsh about him. He is a kind-hearted farming god who created a waterway from the base of the mountain for the farmers. He’s celebrated at Onizawa’s Oni Shrine.

Since Sasaki’s creations are drawn from a survey of Tsugaru and Aomori supernatural folklore, the ghost map also serves as a reflection of local concerns, troubles, and neuroses. It’s easy to imagine that Amazake Baba came about in times of plague or pandemic, when people shut themselves in the house in fear and performed superstitious rituals to ward off evil vibes, or that the subsistence farmers struggling to survive in a remote and lonely landscape prayed for an assist from a gentle giant.

Shops all over Hirosaki sell the coffee, and you can buy it in the prefecture’s capital, Aomori City, too. There have been numerous local blog articles, a major newspaper piece, and an exhibition of the drawings at the prefectural tourist information center. Sasaki is surprised the series has attracted so much attention. “Yokai are not only cute characters, but can be brutal, scary or sad, and I’d like people to know that.” But the series is popular, perhaps because it doesn’t sugar coat the spirits’ darker, needier, and less attractive traits. The ghosts and monsters act raw, wild, and savage in ways that humans don’t often allow ourselves.

She’s an old phantom who peddles to farmhouses on cold nights “Would you like some amazake?” “How about some amazake?” Well, it’s said if you answer her, you’ll get sick, so people hang cedar leaves or heavenly bamboo branches to repel her visits. The “cedar ball” that’s hung in the front of the sake cellar changes color notifying you of the maturation of the sake, and also serves as a talisman against evil spirits.

Sasaki draws inspiration from not only lore research but walking the city and imagining what may lurk in its corners. Kitaoka hopes that the coffee series will encourage people to have a second look at Hirosaki. “Hirosaki is a castle town with a quiet, static image. That’s what gives it the ghostly feeling,” says Kitaoka. “A ghost is something that we don’t really know if it exists or not, right? But in this town, it feels like they are quietly existing among us. For me, personally, I feel like they exist.”

Podcast: Listener Encounters With the Unknown

Join us for a daily celebration of the world’s most wondrous, unexpected, even strange places.
mystery

Podcast: Brushes with the Unknown

Think you have what it takes to be a spiritual medium in Lily Dale?
sports