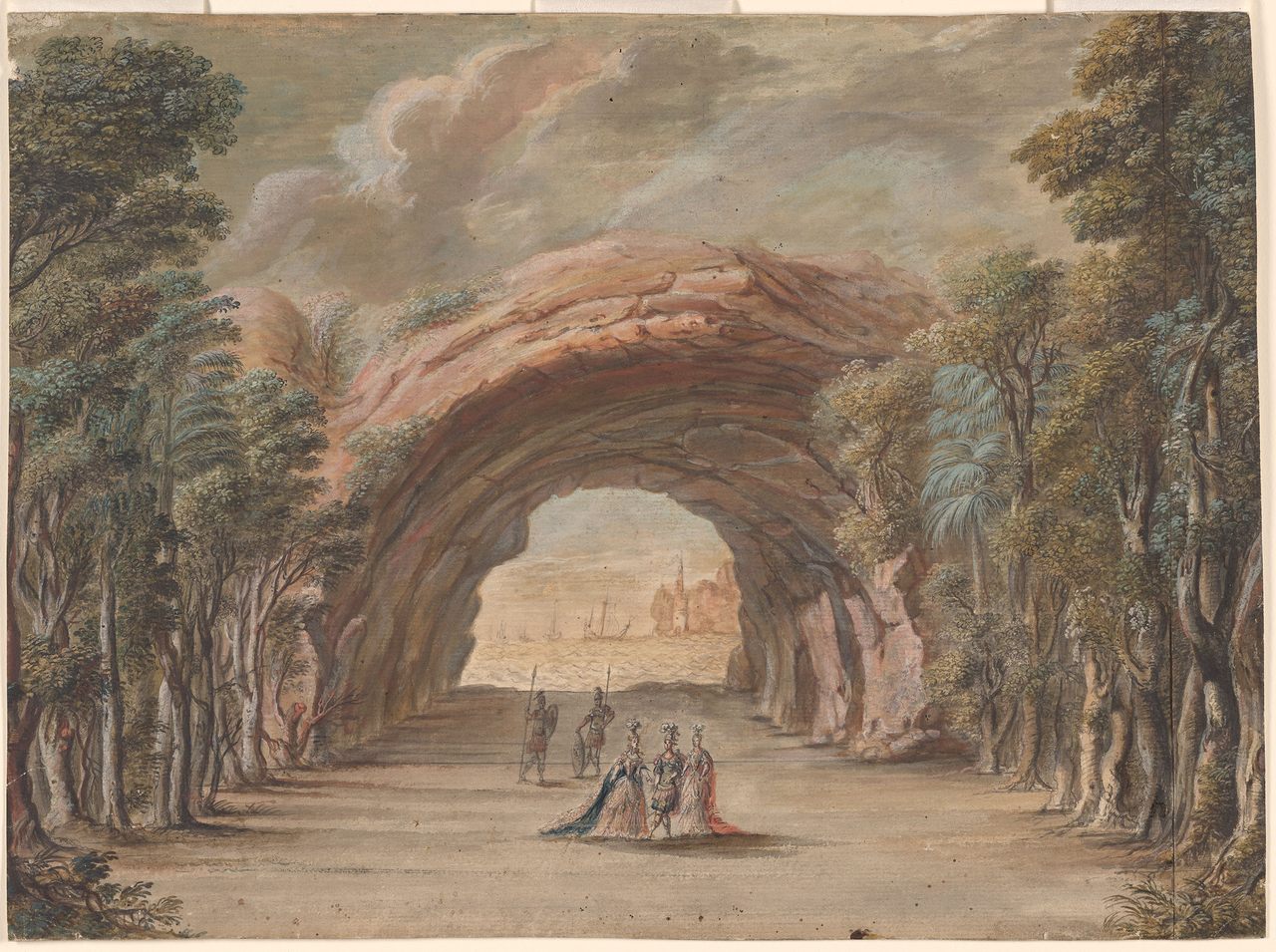 A Torelli set known as “Sea with Ships seen through a Rocky Cavern." Likely originally designed for a failed 1647 production of Orpheus, it was reused in 1650 for Andromeda. The Morgan Library & Museum

In 1660, the stage designer Gaspare Vigarani came into an unexpected windfall. The Louvre was expanding, and the Grande Salle du Petit-Bourbon—a massive theater that had housed operas, plays, and ballets for nearly a century—was being destroyed to make room. Vigarani was told to grab everything he could from backstage and move it to his own theater, the Salles de Machines, which was then under construction.

Vigarani could have jumpstarted his new venture with a warehouse’s worth of set dressings, stage machinery, dropcloths, and everything else a young theater could ask for. Instead, he burned all of it to cinders—“ay, to the very least,” as the actor and theatrical historian La Grange wrote afterwards.

Why did he do this? Pure professional jealousy. As La Grange put it, “He made these decorations be burned… in order that nothing should remain of the invention of his predecessor, the Sieur [Giacomo] Torelli, whose very memory he wished to bury in oblivion.”

At this last part, he did not succeed. The legacy of Giacomo Torelli, the creator of the burned machinery, persists to this day. “He fundamentally changed the staging of opera,” says Evan Baker, a set design historian and former stagehand. Among those in the know, Torelli still keeps the nickname he earned in the 1640s—“il gran stregon,” or “The Great Wizard.”

Not much is known about Torelli’s early life. He was born in 1608, in Fano, Italy, a small city located on the upper calf of Italy’s boot. After doing some set design for local amateur productions, he moved to Venice in 1640, and found engineering work at the military shipyards there. It’s thought that the days he spent there, learning how to manipulate huge ships and cargo loads with judiciously placed ropes and pulleys, helped to inspire his later theatrical contraptions.

After a long day squinting up at the riggings, Torelli and his fellow engineers likely spent at least some evenings taking in one of Venice’s favorite entertainments: the opera. As Baker writes in From the Score to the Stage: An Illustrated History of Continental Opera Production and Staging, Venice was where opera went from a royalty-only pursuit to one that at least certain members of the public could enjoy. Starting in the mid-1630s, anyone who could afford a ticket was able to attend, say, the Teatro Santi’s production of The Evening: Bride of the Sun, or The Thunderstruck Sorceress at the San Cassiano.

For many of these shows, decadent set pieces made up part of the appeal. Shows like the San Cassiano’s 1636 production of Andromeda featured bright seascapes, verdant woods, starry skies, and gods riding across the clouds in peacock-drawn chariots, each set replacing the next as the story required. At the time, Baker explains, operatic set-changing like this was a massive team effort. If a scenic transition called for, say, an oceanscape to replace a mountain, this required at least two stagehands to roll each piece of the mountain scenery off the stage on a special wagon, wrestle it down, replace it with the corresponding piece of oceanic set, and shove it onstage again.

Other special effects, like roiling seas, descending gods, or terrible hellfire, all required special effort. (In the words of one set designer of the era, “fools and thick-witted persons” must be kept away from such effects, else “mishaps result.”) Even just hiding the lights, crossbeams, and other guts of the theater meant several men had to heave-ho huge canvas strips up into the rafters, by way of a rope-and-pulley mechanism.

Sometime in 1640, Torelli left the shipyard and began working at a brand new theater, called, fittingly enough, the Teatro Novissimo. He set about making a machine that would take all this motion—the up and down, back and forth, and side to side—and condense it. Torelli’s innovative contraption, the heart of what is sometimes called his “pole-and-chariot method,” sat beneath the stage, and was made up of a giant rotating drum attached via ropes to a number of trolleys.

Each trolley had a pole coming off of it that went through a slot in the stage and attached to a different scenic flat. When someone turned the drum, all the trolleys moved at once, rolling the old set offstage at the same time as the new set came on. Simultaneously, thanks to an ingenious combination of ropes and pulleys, dropcloths rose and fell. The result was an all-in-one scene machine that was like ten stagehands put together, all centered around a single rotating winch.

The first production Torelli worked on—La finta pazza, or The Pretended Madwoman, a tragic Greek romance by Francesco Sacrati—opened just a year after he arrived in Venice. By that time, he’d outfitted the brand new Teatro Novissimo with his sorcerous contraption. The show provided plenty of draws: heroes, gods, feigned insanity. But when the curtain dropped and people left the theater, they were talking about the sets. Under Torelli’s tutelage, “clouds for gods transformed seamlessly into royal courtyards or woodland glades,” all in front of an enraptured audience, writes Baker.

Meanwhile, behind the scenes, sweat, stress and stubbed thumbs had been replaced by calm. Cranking the drum was so easy, a single 15-year-old could do it. “It was a transformation,” says Baker. “Suddenly, everything could happen all at once.”

The show was an instant hit, and Torelli an immediate sensation. Critics described his work rapturously: his sets “moved with such speed and cohesion as to defy the intellect”; they “astounded the audience with [their] natural magic,” and should “ensure the designer unceasing praise.” So many people flocked to the show, Baker quotes one reviewer as writing that some “cursed their own laziness when they arrived and could not find a place to sit.”

After a few more years and a few more shows in Venice, Torelli moved to Paris in 1645, at the request of some nobles who were curious about Italian opera. There he restaged The Pretended Madwoman at the Grande Salle du Petit-Bourbon, where it was once again a great success. Over the course of his Parisian career, he built bigger and better sets, incorporating other modern effects—flying people, rotating stages—and taking on more and more lavish stories.

After one six-hour production of Orpheus proved too long for even the most dedicated fans, a writer was commissioned to write a new opera specifically to repupose Torelli’s sets, which had been the most popular part. The result, Andromeda, was a greater success, with critics admiring the “open sea, which appears so vast that one would swear that the ships floating on the horizon are more than six leagues from the spectators,” as well as the “ingenious artifice of perspective” that made an orange grove seem infinite.

Torelli’s career in France eventually ended after he lost favor with Louis XIV (he’d accidentally been caught up in the fall of the king’s disgraced finance minister). He returned to his birthplace of Fano, and staged one last show before he died in 1678. He left all his money to the poor, Baker says. (His wife, a French noblewoman named Francesca Sué, had passed away a few years earlier.) The machines and sets he built for the Petit-Bourbon continued to be used until Vigarani burned them; elsewhere, his creations and others he inspired remained in place for about 200 years, says Baker, at which point they were replaced by new innovations in turn.

One theater, though, hasn’t let go: Drottningholms Slottsteater, in Stockholm, still uses a Torelli-style machine from the 18th century for all of its shows. To be safe, a team of men, rather than one 15-year-old, turns the understage winch, rushing to their places as soon as a light on the wall turns red, says Baker, who visited a few years ago. As they push the drum, the scenery above switches, in one big analog swoop. “It was an epiphany for me to see it in action,” says Baker. “You watch as the scene changes. You hear the rumblings of the chariots. It’s magic! I thought I’d died and gone to heaven.” That can happen when a bank of clouds appears seamlessly before you, replacing the Earthly scene that came before.

Many genetic mutations, together in one place.
theatervisualhistory

During the winter months, the iconic French site casts a perfect shadow on a bay full of history—and quicksand.
culture

Images of a city and culture showing itself off to the world.
Video