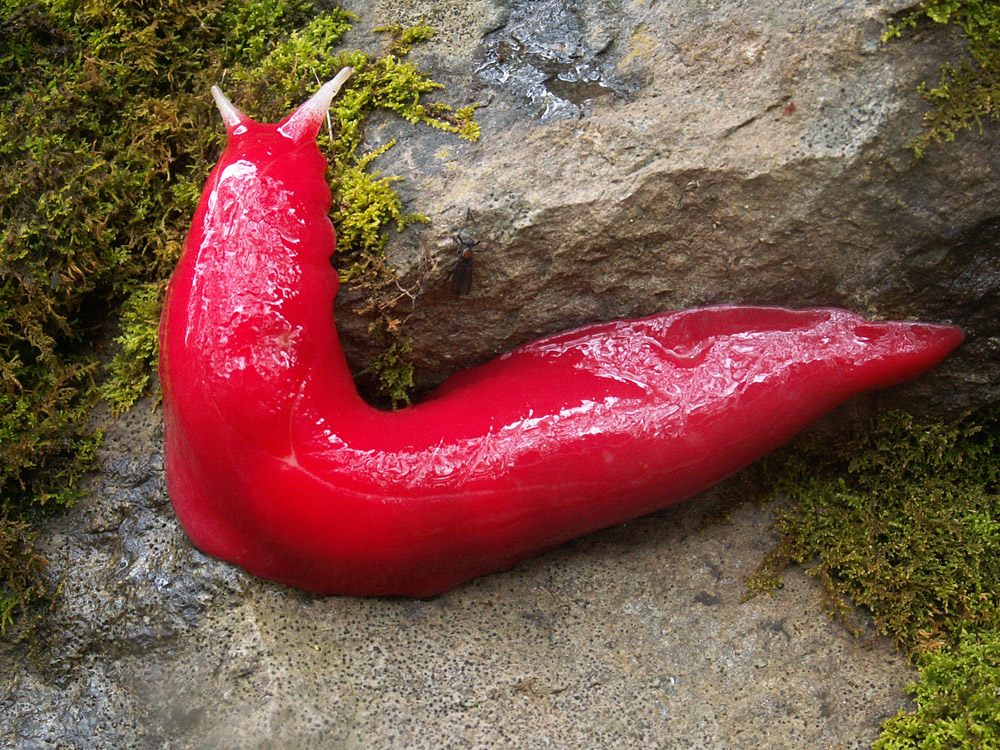 The sizable slugs are bright, but good at hiding. NSW National Parks and Wildlife Service/Michael Murphy
In This Story
Destination Guide

The Mount Kaputar pink slug is marvelously unsubtle. A screeching, fluorescent pink and up to eight inches long, it looks like an enormous tongue stained with Kool-Aid.

Despite its loud appearance, the slug typically leads a pretty chill life, marooned at least 3,280 feet up, on the remains of an ancient volcano near Narrabri in the Australian state of New South Wales. On misty nights or mornings, when it slides out from a rocky hideout or blanket of leaf litter to forage, the slug inches up rock faces or the trunks of snow gum trees or other eucalypts, hankering for lichen, algae, and fungi. Then, as day breaks, it usually disappears again to avoid finding itself in the beak of a laughing kookaburra or pied currawong. This penchant for retreat probably helped the flamboyant introvert survive when fires tore through parts of its habitat in Mount Kaputar National Park at the end of last year.

Across the country, scientists are still taking stock of the impact of the ongoing, devastating bushfires—which have burned tens of millions of acres—on animals. Certain species, including the platypus and the Mount Kaputar slug, pose particularly maddening challenges for study, because they can be elusive even under normal circumstances. Scientists aren’t entirely sure exactly how many of the slugs there were before the fires.

Researchers have fanned out to survey Mount Kaputar’s hot pink denizens several times over the past 13 years, but counts can vary widely depending on the weather. “Mollusks generally like it rather wet,” says Frank Köhler, a malacologist at the Australian Museum in Sydney.

“If you’re surveying on a wet afternoon, you might see 60,” says Isabel Hyman, the museum’s scientific officer of malacology. “On a dry night, you might see two.” In 2010, researchers tallied 63 slugs in 10 minutes on a spritzing November night. The very next evening, which was drier, they hardly spotted any. Anja Divljan, a technical officer in mammals at the Australian Museum, witnessed the slug’s vanishing act firsthand a few years ago, while surveying mammals such as kangaroos, greater gliders, and common ringtail possums. When the landscape was slick with rain, the slugs “were suddenly everywhere and very conspicuous,” Divljan writes in an email. “As the land dried, they disappeared back into their hiding spots.” And during droughts, it can be hard to gauge whether there are few slugs to be seen because the population has dipped, or they’re simply staying hidden in a blessedly humid cranny. Köhler and Hyman both suspect that somewhere around 10,000 pink slugs called the park home before the fire.

Between October and December 2019, fires burned more than 44,000 acres of land in the park, according to The Guardian—close to half of its total area. Still, the fire there appeared to be patchier and less intense than some of the other bushfires, and some of the slug’s habitat was relatively unscathed, while other areas were only lightly burned. “They were lucky in that way,” Hyman says.

Still, any fire on the mountain is a scary scenario for the survival of species endemic to the area, Hyman adds, and the slugs are thought to live nowhere else. When a species is confined to a single, small, isolated habitat, any disturbance there could wipe them off the face of the Earth. The Mount Kaputar pink slug is classified as endangered on the IUCN Red List of Threatened Species, an inventory of at-risk creatures around the world. The peak is home to a menagerie of other mollusks as well, including 18 species of native snails, according to a 2019 paper in the Proceedings of the Linnean Society of New South Wales. Of those, eight seem to have no other sliming grounds. On the basis of its slugs and snails, the state government designated the area an endangered ecological community in 2013, and called for plans to manage fire risks, road and path planning, and feral pigs and goats.

Slugs avoid fires the same way they avoid birds, Köhler says: They’re too slow to flee, so they hide. At their usual clip, the slugs travel maybe 20 to 40 feet an hour, according to the authors of the 2019 paper. They might be able to go a little faster to elude a predator, Köhler says, but probably not for long.

In this case, the slugs may already have been holed up. “Fires don’t just jump out of nothing,” Köhler says. The slugs are particularly vulnerable to the hot, dry conditions that set the stage for bushfires, since, unlike shell-hauling snails, they’re entirely exposed to the elements. In hot, dry periods, Köhler says, they’re not likely to be out and risking desiccation. They would seek out places such as the rotting trunks of fallen trees, Köhler says, and hunker down deep inside.

In the aftermath of the blaze, the park is closed to visitors, but staff have been roaming around and cleaning up. Already they’ve noticed the understory growing back in and leaves beginning to reappear—and, so far, they’ve made more than 60 sightings of the hot-pink residents, including live creatures and the distinctive, bauble-shaped trails they leave on tree trunks, writes Adam Fawcett, a New South Wales National Parks and Wildlife service project officer, in an email. Researchers don’t yet have an estimate for how many slugs died or how the population is recovering, he writes; systematic surveys will take place between March and May, when temperatures are more slug-friendly.

Even with the fire behind them, the slugs aren’t in the clear—they still have to deal with feral pigs trampling their habitat, the beaky maws of predators, and a more existential woe that could simply squeeze them off the planet. The slugs have adapted to life in this “small landscape pocket which is surrounded by hotter, drier, lowlands,” Köhler says. As the climate changes, the little parcel of cool, moist land they call home could shrink and shrink until it disappears completely.

The 190-day event was the largest caldera formation ever observed.
volcanoes

For more than a decade, hot mud has oozed across thousands of acres, displacing entire villages.
disasters

Thousands died in 1986 when the crater lake unleashed a cloud of toxic gas. Could it happen again?
forests

In Oregon, the Humongous Fungus plays a complex role in an ecosystem reshaped by humans.
Video • Object of Intrigue