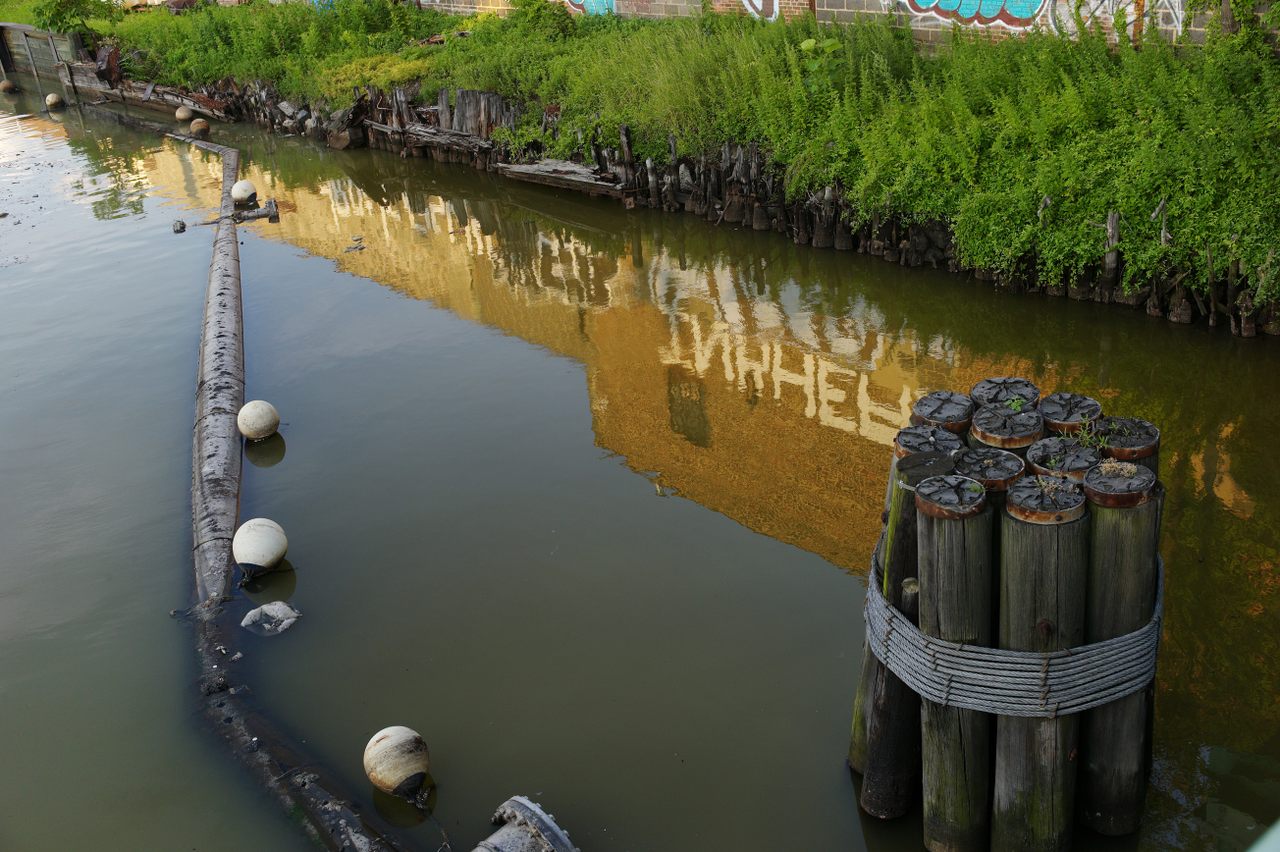 The Gowanus: kinda picturesque, but also terribly polluted since the 19th century. Andrew Lichtenstein/Corbis via Getty Images
In This Story
Destination Guide

In the late 19th century, life along the shore of Brooklyn’s fetid Gowanus Canal was the stuff of nightmares. The stench emanating from the 1.8-mile-long slash of stagnant water was awful enough to penetrate people’s dreams. Take Stephen Mooney. In 1889, the unwelcome smell shook him from sleep, and compelled him to shut his window and air his grievances.

Mooney—a secretary of a local railroad—was one of several people eager to complain about life next to the muck. The Gowanus Canal Commission, convened by the local health commissioner and an assemblyman, had to listen to a lot of harrumphing. The water “can hardly be called water, as it always has a dirty, thick appearance,” one provision seller argued, according to a recap of the meeting in The Brooklyn Times. Another resident reminisced about catching shrimp in the water years before, when it ran clear; now, he said, “the water is dirty and filthy.” Anyone who fell in, he continued, “would stick in the mud,” no matter how skilled they were at swimming. Another resident groused that southeasterly winds battered his house with “some pretty foul doses.”

Some things haven’t changed. When the wind is right, the water still announces itself from several blocks away. Residents continue to remark on its shifting hues (the dour gray of dirty dishwater, a queasy green, a purply, oil-slick swirl) and its putrid bouquet (acrid, sulphuric). The canal deserves the sarcasm of its contemporary nicknames, which include “Perfume Creek” and “Lavender Lake.” More than 120 years after Mooney and others complained about the malodorous Gowanus, locals are still moaning about it, and work is finally underway to remedy it.

When the canal was engineered from a marsh in the mid-19th century, its architects weren’t particularly worried about the placid water going gnarly. “Water from the Upper New York Bay flowed in, but then just … stayed there,” wrote Dan Nosowitz in Popular Science in 2013. “There was no need for flowing water, the planners thought, because the canal would only be used to access inner Brooklyn from the ocean.” But it quickly took a turn. Tanneries, chemical plants, and other industrial outfits set up shop near the shore. The city dumped sewage into the canal beginning in the 1850s, according to the Environmental Protection Agency. Storm water rushed in, too, bringing industrial runoff with it.

The water still harbors all sorts of unsavory things, including lead, mercury, and copper, as well as polychlorinated biphenyls, chemical contaminants linked to cancers and issues with the endocrine and nervous systems. The deposits blanketing the canal bed have come to be known as “black mayonnaise”—oily and fluffy on account of the chemicals, and blackened by tar and rotting carcasses, an EPA spokesperson recently explained to The New York Times.

In the waning weeks of 2020, a long-awaited $1.5 billion remediation effort kicked off along the canal. But even in Mooney’s day, the need for something to be done about it was already old news. “The lives of those compelled to live near the canal have been made miserable by the stagnation of the water,” grumbled the New-York Tribune in June 1905, in a dispatch that shared the front page with blurbs about run-ins between automobiles and carriages, Edith Roosevelt cooking breakfast for herself and Teddy over an oil stove, and a peace agreement between Russia and Japan. By 1910, the canal had become infamous: The Brooklyn Daily Eagle reported that the passage “has long been known as one of the most polluted bodies of water in the world.”

In centuries past, European and American journalists and reformers elevated complaining about disgusting scents into an art—partly because offensive odors were often thought to be matters of life and death. Before scientists came to understand that microorganisms make us sick, they blamed foul air. Miasma theory held that people “got sick from breathing a cloud of particles arising from some source of contamination, like rotting garbage,” says Jeffrey C. Womack, a public historian whose research includes infections and the history of radiation therapy. “The idea was that you could find the source of the sickness by looking for bad smells.”

In the late 19th century, a period of breakneck industrialization, the vocabulary we now use to describe contamination didn’t yet exist. (The word “pollution” conveyed moral corruption, instead of, say, a chemical spill, explains Virginia Tech historian Melanie Kiechle, who studies environmental history and urban environments.) Still, there was widespread concern over how human industry was mangling the environment. In America’s urban centers such as New York, “there was a shared concept of what a river would look like—clear stream, babbling brook—and descriptions of foul odors and black waters run counter to those expectations and signaled that something was wrong,” Kiechle says.

Because miasma theory equated foul smells with dangerous environments, people who were able to avoid stinky areas usually did. When they couldn’t stay away, they tried to mask the stench: New Yorkers routinely pinched their noses while hurrying past slaughterhouses, and armed themselves against odors with nosegays, sachets, smelling salts, cigars, and more, writes Kiechle in the book Smell Detectives: An Olfactory History of Nineteenth-Century Urban America.

By the late 1800s, residents of various cities “grumbled so loudly because now they expected reformers to step in and do something about the odors,” says Carolyn Purnell, author of The Sensational Past: How the Enlightenment Changed the Way We Use Our Senses. “Before, the smells had been a bother,” Purnell says. “Increasingly, they became an issue to be dealt with.”

The sight of noxious water may have been stomach-churning, but many people could avoid it by giving the canal a wide berth. Not so with a foul stench. “Smells travel,” Kiechle points out—and the nasty tendrils drifted to the homes of middle- and upper-class people outside of the immediate vicinity.

Nineteenth-century writing was notoriously florid, Kiechle says, but the over-the-top descriptions were useful. To rally support for changes, it helped to capitalize on grossness. “Disgust is such a visceral, impulsive, almost instinctive reaction, so a disgust response is designed to elicit action,” Purnell adds. “Maybe by using such vivid descriptions, public health advocates and reformers [were] trying to appeal to people’s innate sense of disgust. Perhaps triggering that response would be more likely to drive people to action than a rational appeal.”

And there was no shortage of gross descriptions of stinky rivers. Sometimes, action followed. When the hot summer of 1858 baked the sewage stewing in London’s filthy Thames, city officials began overhauling the struggling sewer system. (That mess was a long time coming: One 1820s caricature shows a woman so scandalized by the mutant creatures she glimpses in a magnified view of a droplet of Thames water, captioned “Monster Soup,” that her teacup clatters to the floor.) Paris’s Bièvre River—described by writer and painter Georges Cain in the early 1900s as “oily,” “streaked with tannery acids, reddened by skins of sheep recently flayed that steep in it,” and flowing “miserably and sordidly” in a manner that “infected” the community it passed through—was eventually rerouted underground, to course through the sewers. Nineteenth-century engineers intervened to reverse the flow of the Chicago River, which was flanked by slaughterhouses. Odors wafting off of Newtown Creek, at the north edge of Brooklyn, were upsetting enough to help inspire the creation of a new public health body, Kiechle says.

Smelly bodies of water are often contaminated ones—in that sense, the miasma theorists were on to something. Through smell, “people were identifying real environmental problems,” Kiechle adds. And some still haven’t been solved.

For decades, the Gowanus seemed just on the cusp of some kind of restoration. A journalist for the New York Daily News thought progress was imminent in 1970, with the announcement of a $110 million incinerator and sewage plant set to intercept the reported millions of gallons of untreated waste that poured into the canal each day. “Brooklyn’s Gowanus Canal will never be a glimmering mountain stream, but in a year or a half to two years those who live or have business near it will no longer have to hold their noses,” the paper predicted, forecasting that “the waters will lose their nostril-stinging effluvium.”

They didn’t, and the canal was designated a federal Superfund site in 2010. This initial dredging effort is expected to wrap in mid-2023.

Meanwhile, even as locals shun the stench, some embrace the squalid stretch of water as their own. The dirtiness and the lore surrounding it (such as the imagined menagerie likely littering the bottom, like a synthetic whalefall) “has imbued the canal with an almost fantastical aura,” The New York Times reported. The savvy Gowanus Souvenir Shop hawks a jar-shaped enamel pin labeled “Black Mayonnaise.” It glows in the dark, a cheerfully toxic talisman and an homage to a river that’s been gross for longer than anyone can remember and might—maybe, finally—be on the way to something resembling clean for the first time in ages.

Sharks, beavers, and humans are all returning to London's iconic waterway thanks to decades of restoration work.
extinct animals

Scientists and schoolchildren worked together to bring the tequila fish back from extinction.
computers

In the murky waters of Bocas del Toro, you can't see the manatees, but you can hear them.
sewers

Or anything else that doesn't belong there, for that matter.
Want to see fewer ads? Become a Member.
From Around the Web
THE GASTRO OBSCURA BOOK
Taste the World!
An eye-opening journey through the history, culture, and places of the culinary world. Order Now