What Can a Linguist Learn From a Gravestone? - Atlas Obscura
Want to see fewer ads? Become a Member. 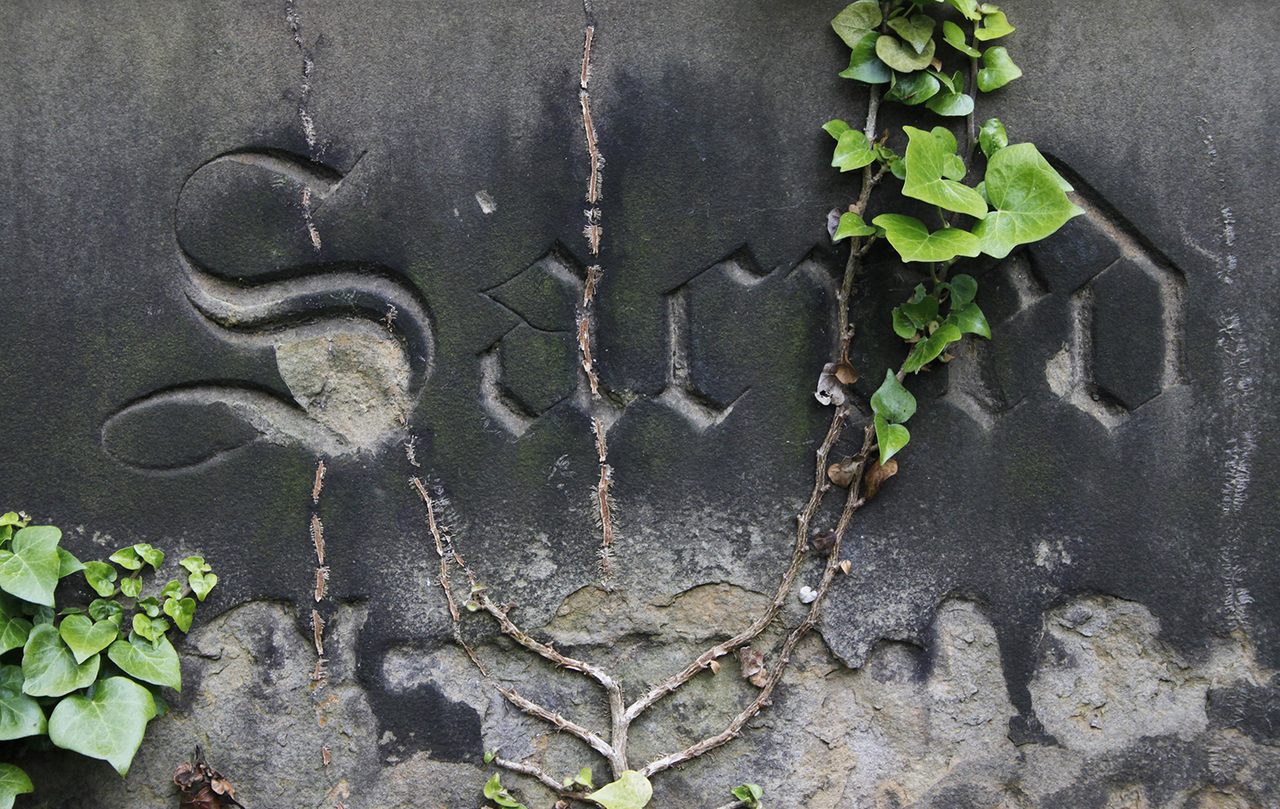 "Sacred," carved in gothic script on a Victorian gravestone with ivy. Trevor R A Dingle/Alamy

Gravestone inscriptions, beyond the simple “name, date of birth, date of death” templates, are both a lasting, permanent record of a life, and also a record that the person buried under has very little control over. They’re also a valuable and extremely under-studied corpus of linguistic data, albeit a frequently misleading and opaque one. Linguists around the world go into graveyards, dutifully record what they say, check them against historical records, and try to find out the answer to the most basic questions. Who are these people, and these communities? What was important to them?

Before we get into inscriptions, I should mention that this article focuses on western Europe and North America. The traditions worldwide are just too varied to write about in one article; some of the people I talked to mentioned that entire dissertations have been written about the gravestones of a single city.

Elise Ciregna, a religious studies professor at Harvard and the president of the Association for Gravestone Studies, says that inscriptions have existed as long as people could chip letters into stone, but that the more detailed inscriptions we see today—biblical verses, poetry, descriptions of the life of the buried—date back to the 1600s. The key running theme of gravestone inscriptions is that they are for the living, and even for a more specific task: they reaffirm and reiterate membership in a group, and the beliefs that are part of the culture of that group. This does not necessarily mean that they are particularly informative about the life of the specific deceased, but they are full of useful, sometimes subtle cues about the community the deceased belonged to, and what they valued.

Ciregna mostly studies colonial gravestones in the American northeast. There are language conventions in the 17th century that, she says, are usually associated with the Calvinist faith. They’re pretty gloomy and direct; you see a lot of stuff like “Here lyeth the body of Elisabeth the wife of William Pabodie who dyed May ye 31st 1717 and in the 94th year of her age.” But you can get some pretty decent information from that. Ciregna noted how common it was for women’s inscriptions to mention their relationship to men. “Wife of,” “consort of,” “widow of,” “daughter of.” This kind of information was, to them, the most important thing, which tells you a bit about the gender relations of the time period.

By the 19th century, you’ll see more and more elaborate inscriptions, and also a change in tone. The epitaphs become less gloomy, more celebratory. Here’s one: “She is not dead but sleepeth.” Another, written by Pearl Starr for her mother, the notorious “Bandit Queen” of the American west:

Shed not for her the bitter tear
Nor give the heart to vain regret
‘Tis but the casket that lies here—
The gem that filled it sparkles yet.

Ciregna ties that newfound optimism and cheer to the changing religion—Calvinism to various less gloomy forms of Protestantism—in the northeast. But there are other clues within the engravings; a sheaf of wheat was commonly used to mean a successful businessman. A broken tree branch or broken column means somebody was cut down too soon. A skull and crossbones, which was common at the time, didn’t mean the person was a pirate; it was a symbol that everybody dies, that death is simply a part of life. Others told of the racist views of the time; Ciregna said she saw more than once a column for a black person whose inscription carried a message of “in life he was black, but in death he joins the white community.”

John O’Regan, a sociolinguist at University College London, told me about one very minimal inscription he found: nothing more than a name, Thomas Beale. Turns out Beale was at one point a successful businessman and trader, but lost much of his fortune. One day he disappeared; his body washed up a few weeks later. Records show that it was believed he died by suicide, such a taboo that he wasn’t given any other information on his gravestone at all, even though his family remained wealthy enough to spring for an expensive box tomb.

The role of the actual stonecutter is also a pretty unheralded but vitally important factor in gravestone inscriptions. Stonecutters during before the late 19th century charged by the letter, and often persuaded clients to choose lengthy poems for epitaphs. One very successful Massachusetts stonecutter, Alpheus Cary, actually wrote a book on appropriate epitaphs; among the standard poems and bible verses were poems he wrote himself.

John O’Regan, of University College London, grew up in Hong Kong, and a few years ago constructed a linguistic corpus of inscriptions from a Protestant graveyard in Macao. O’Regan is a sociolinguist, and was particularly interested in the in-group mentalities he saw in the language of these stones, mostly dating from the 19th and 20th centuries.

“The gravestone inscriptions are teaching the people who visit the cemetery about what the most valued things in one’s life are,” he says. “What is it to be a good mother? What are the values of a good mother?” He specifically looked at content words—nouns and adjectives—and found a great deal of similarity among the stones. One notable thing he found was the predominance of the present simple tense.

The present simple tense is the most basic of English verb forms: I write, she writes, he does not write. It seems so basic that it couldn’t possibly imply any sort of meaning beyond the obvious, but it’s actually fairly specific in its use. It’s most commonly used to make statements of fact, and for schedules and routines. “I wake up at 9 a.m.,” that kind of thing. The present simple is almost too simple; because it by nature can’t carry much detail or nuance. Scientific papers use it regularly, as they’re presented as statements of fact. “Where it becomes interesting is, the language that is used for science, to make scientific truth statements, transfers into what we consider, as human beings, to be our fundamental beliefs, or things we believe very strongly,” says O’Regan. The same verb form that’s used for science is also used for faith, religion, and politics.

These sorts of statements are what O’Regan calls “universalizing truths.” By the way they’re constructed, they leave no real room for debate; if you say, “There is one God,” you are not initiating a discussion. These are meant to indicate conclusiveness and also a more profound truth than, say, “John Smith was a man who believed in a singular God.”

O’Regan also noticed a use, maybe even a more frequent use than in normal conversation, of the definite article “the.” Typically you use “the” along with a noun only after you’ve introduced it, as in, “I went shopping and bought a book and a shirt. The book was for my sister, and the shirt was for my brother.” But the gravestone inscriptions he studied use it right away, with no introduction: “the lord,” “the dead,” “the cross,” “the redeemer.” These imply that the reader of the inscription, whoever it is, is in the same group as the composer of the inscription, and shares the composer’s values. There are even references to “the heathen,” which, for a western cemetery in Macao, certainly meant the Chinese. None of this would necessarily be clear to someone who didn’t share at least some values with the deceased; cemeteries are for the in-group, not outsiders.

Katharina Vajta studies French at Gothenburg University, and wrote a paper a few years ago on gravestone inscriptions in Alsace. Alsace has over the past few centuries been a part of Germany, France, Germany, and France again; its residents originally spoke a German dialect known as Alsatian. “While in theory you might expect [the inscriptions] to be the language of the ruler, that wasn’t always the case, so I started to see if I could find any patterns,” says Vajta. In 1871, Alsace became officially German after the Franco-Prussian war. People buried in Alsace would have fought for both sides, and yet only those who fought for France chose to put their military accolades on their tombstones—despite the fact that the disputed region wasn’t even in France anymore.

That’s not to say that no gravestones in Alsace are written in German. “It’s really inflecting or mirroring the linguistic change in the region,” says Vajta. “You can find gravestones where, in the same family, there are sometimes four, five, ten people buried in the same grave. Some are in French, some in German, some no language at all. You can follow that on a single gravestone.”

Gravestone linguistics are shifty and unclear, for all their definitiveness. How much do you really trust the veracity of the statements? When was the last time you saw “in life, he was a real jerk” on a gravestone? But there’s information there, historical data to be pored over and analyzed. Spooky but productive.