This Bird's Mating Dance Is Full of Stomp and Pomp - Atlas Obscura
Want to see fewer ads? Become a Member. 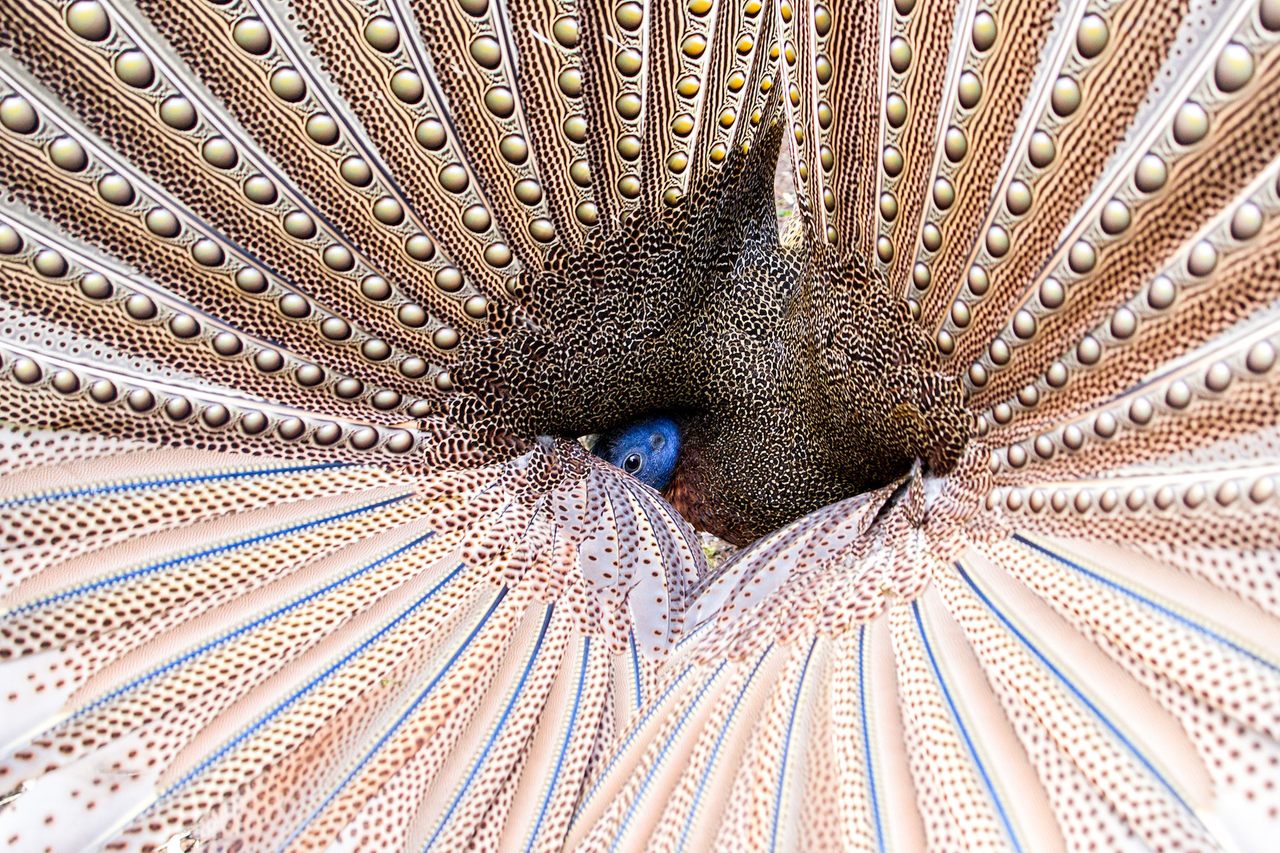 A male great argus hopes to impress a potential mate with an arresting show of plumage and pomp. Jeremy Dwyer-Lindgren/Woodland Park Zoo
In This Story
Destination Guide

At first glance, you might think you’re looking at a tunnel on the set of a sci-fi series, or a cranny of a coral reef, or maybe a piece of digital art. Focus your gaze a bit, though, and you’ll notice an intent gaze coming right back—from an argus pheasant, also called a great argus. Like a stage director peeking around the curtain’s edge, he wants to know whether his audience is enjoying the show.

This image, taken at Seattle’s Woodland Park Zoo, captures the impressive and unusual finale to a courtship ritual that’s equal parts stomp and showmanship—but one that starts with a display of domestic tidiness. The males of the species “first get the area ready by picking up pieces of wood, rock, et cetera,” says Kayla Hanada, one of the zoo’s animal keepers. “Then, they will stomp and charge around the female pheasant.”

After all that bustle and bluster, the male strikes a particularly dramatic pose that “involves a sort of bow-hop where they bend the wings around their face, flip their extremely long tail feathers up, and vibrate them so they make a very cool rustling noise,” Hanada says. “The bird is actually flipping his wing feathers up and around to make a halo-like effect in front of his face,” she adds. “They turn their head to the side so they can see out of a little space in between the wings.”

Despite the eye-catching plumage, the argus pheasant in the top image may seem a bit bashful peering out from behind its feathers. Hanada assures us that’s not the case. “Our argus pheasants are actually very personable. They are normally the biggest birds in the aviary, so they’ve got nothing to be shy about,” she says.

The birds, native to Southeast Asia’s Malay Peninsula, Borneo, and Sumatra, are among the largest of pheasants; while females are smaller and less colorful, the resplendent males can weigh up to six pounds and be more than six feet long from beak to tail feather tip. Hanada says the zoo’s great argus are easily trained and males are willing to put on a show even without a desirable hen present. “This one in particular loves to display to the animal keepers,” she says.

Despite all the pomp and plumage, the male’s best efforts don’t always achieve the desired effect, and sometimes the female simply sashays away, uninterested.

While the males of many other bird species have elaborate courtship rituals and dances, not many use their wing feathers to such dramatic effect. The Indian peafowl, for example, is closely related to the argus pheasant, but males—the familiar peacock—make their case for courtship by raising their resplendent tail feathers up and shimmying a bit. Several species of birds-of-paradise, a diverse group spread from Indonesia and Papua New Guinea to Australia, do spread their wings to show off their feathers to potential mates. But we know who gets our vote for the greatest showbird on Earth.

Scientists have pieced together a detailed biography—including a search for love and a violent end.
animals

Scientists observing a pod in the wild think the animals may choose specific species for a skin care wellness routine.
Video