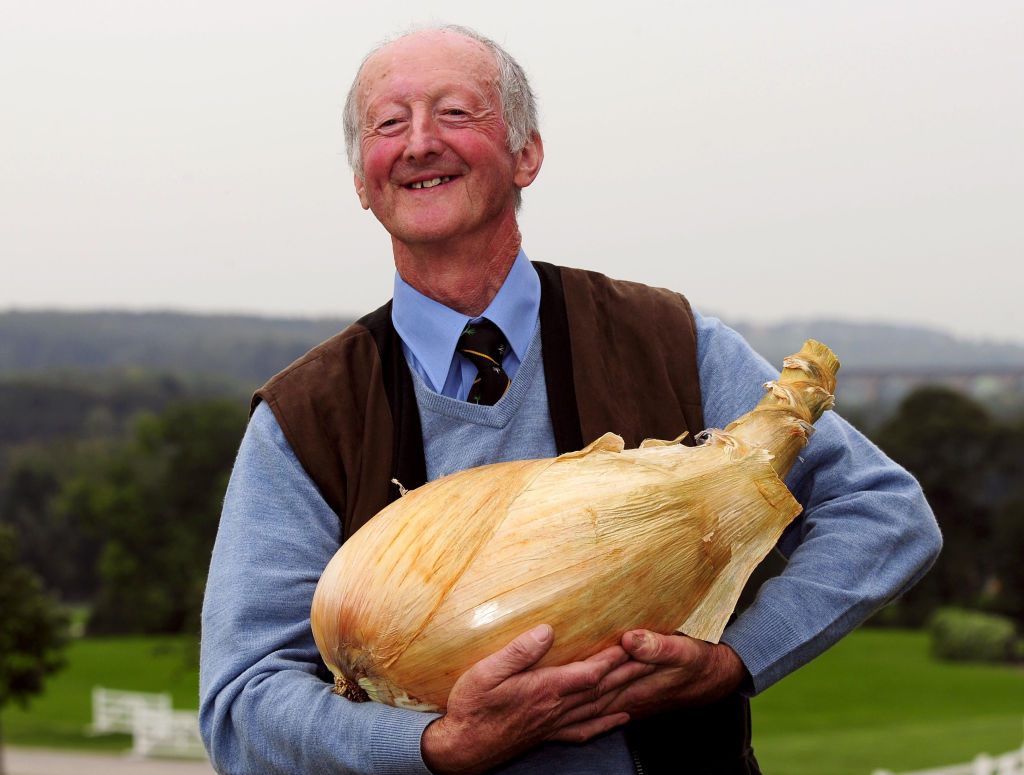 Peter Glazebrook cradles one of his creations, an 18-pound onion that won the world record in 2012. John Giles/Getty Images
In This Story
Destination Guide

For Peter Glazebrook, there was one bright spot to 2020. A leek he entered into last year’s Mansfield Grow Show, which judges declared to be a monstrous four feet long, won him a new world record. “That makes 16 world records I’ve held over the years,” Glazebrook wrote to me recently, via email. “However, it’s a competitive hobby, so I currently only hold three.” Today, he is the proud grower of the world’s heaviest cauliflower (60 pounds), potato (10 pounds), and, as of 2020, the longest leek.

Glazebrook, a lithe, 76-year-old former building surveyor from Nottinghamshire, England, is one of the most decorated competitors in the world when it comes to the uniquely British sport of growing giant vegetables. For years, he has dominated a competition that’s grown from a Welsh bar bet into a massive online community of giant vegetable enthusiasts with participants on every continent. “It’s expanded beyond all recognition,” says Kevin Fortey, the unofficial spokesperson for the ‘giant veg’ community. But if 30-foot-long beets, 10-pound tomatoes, or one-ton pumpkins sound like a waste of food and time, government researchers around the world are now taking a serious look at leviathan produce.

Both a friend and rival of Glazebrook’s, Fortey is the unofficial spokesperson of the giant veg movement. In fact, the 42-year-old project manager from Cwmbran was there when modern competitive vegetable growing was launched in a south Wales pub in 1980—by his own father. “It was just a bit of banter over a pint, really,” says Fortey, “over who could grow the biggest pumpkin.” His father, Mike Fortey, helped turn the informal challenge among local pub-goers into an annual event.

Yet both the event and the vegetables quickly outgrew the venue. “By the mid-80’s, the pumpkins grew so big they couldn’t get them through the pub doors,” Fortey says. Soon, the competitors were no longer just pub regulars, either. “People were coming from all over Wales, then all over England for this contest,” says Fortey. At about the same time, Peter Glazebrook began dabbling in giant vegetables.

The son of commercial farmers, Glazebrook says growing vegetables is in his blood. As the contests spread across the United Kingdom, his cousin noticed that the vegetables Glazebrook was growing at home were nearly competition-sized already. “He said I should try and beat the local show winner,” says Glazebrook. He won the local cup that year and the two years following, before moving onto larger shows. “My vegetables always grew larger than most,” he notes. As for how he’s accomplished so much in the giant vegetable realm, “I do not keep any secrets,” Glazebrook states. He’s always given hopefuls the standard gardening advice: choose the right seeds, give the plants a long growing season, log their progress, and look after them.

His retirement in 2006 means the 76-year old only has more time—and experience—to focus on his giants. However, a broadening field of growers means he’s facing some fierce competition.

If Fortey is the unofficial spokesperson for the UK’s giant veg community, he’s also a deft recruiter for the UK Giant Vegetable Championship. “I’ve basically grown the show from like five exhibitors to over 100 within the space of five years,” he says. He also created the Facebook group Giant Vegetable Community to get more people involved in growing vegetables by answering questions and exchanging growing tips. “Not everyone can get on in the world, but it’s a happy environment we’ve created,” he says.

Of course, the expanding community of informed growers does make record-holding a tougher game for Fortey and Glazebrook alike. “The competition has become greater with more competitors,” writes Glazebrook. “Giant veg growers used to be more middle-aged and would only meet up at shows or seminars, but Facebook has encouraged a younger age group, which is good.” To level the playing field further, the landscape of seed distribution has changed dramatically in recent years as well, according to Fortey. “Everybody now has pretty much the same seed,” he says.

Glazebrook has even made a habit of sharing seeds among close friends and competitors. “I’ve taken the view that if anyone can put in more time, knowledge, and effort than me, they deserve to win.” Of course, this generosity has sometimes backfired. “I lost my onion record to my own seed,” he writes, explaining that his former record for the world’s largest onion was broken by another gardener using seeds Glazebrook had bred. But, as Fortey points out, “records are there to be broken.” It softens the blow a bit that the cash prizes at national competitions rarely top £50 anyway. Ultimately, Glazebrook is either too sage or too seasoned to lose sleep over the loss of a world record or two. “You need a good challenge to start again each year,” he says.

The greatest issue in the country’s giant vegetable-growing community is simply getting monster produce to the competitions in one piece. “Carrots, parsnips, runner beans, they’re all quite delicate,” says Fortey. Lest they over-ripen, softer produce such as tomatoes, melons, and cucumbers are refrigerated in their final days before showing. “A light rain can split a [zucchini], so you’re really battling with the elements,” says Fortey.

Once in show, victory can be determined by a matter of ounces. “I once won heaviest onion at [a show] by one ounce,” writes Glazebrook. “I’ve also lost competitions by a similar amount.” Fortey has won a zucchini contest by only several ounces once as well. At another competition, he arrived late while the press was interviewing the presumed winner of the prize for heaviest chili. “Then we came in with a chili that was only 90 grams more,” says Fortey. “He wasn’t very happy.”

But after achieving vegetable victory, what can a gardener do with a person-sized zucchini or a pumpkin that weighs as much as a 2015 MINI Cooper? One common misperception is that, since they’re grown for size and not consumption, giants are virtually inedible, good for little more than cow-feed or compost. While Fortey admits some big veggies can get a bit woody, he’s determined to disprove the notion that giants can’t also taste great. One Christmas, he and his sons turned giant competition beetroots into a beet and chili sauce, and a giant zucchini into a thousand jars of chutney, which they distributed throughout the community. Glazebrook often eats his own massive produce, especially enjoying outsized beans and tomatoes in the summer.

The unexpected edibility of these outrageously large vegetables is perhaps what’s caught the eye of government entities, far outside the orbit of the competitive growing world. Some of Fortey’s seeds were requested by the Australian Antarctic Division, who are currently planting giant cucumber seeds in a shipping container in the Antarctic. “No real feedback yet,” says Fortey. He’s also consulting with a university in Spain, regarding a research project funded by the Basque government on giant beets. “I can’t release what it is in specific detail,” says Fortey, “but it’s around gastronomy and will end the myth about woody vegetables.” While not a government entity, Snoop Dogg also once approached Fortey for advice. “I do vegetation myself,” Snoop told the BBC.

As for Glazebrook, the giant among giants is getting to spend more time than usual with his vegetables, due to the pandemic. At the moment, he’s tinkering with the timing of his repotting system. “Every year you learn new ways of growing,” he states. With in-person exhibitions on hold, Glazebrook hopes to soon reclaim the world records for heaviest onion and carrot once competition resumes. “Winning at the top level,” he writes, “gives me immense satisfaction.”

Not a gummy bear was spared during the Great Borough Bake-Off.
farms

Inside the Egg Mayo Protection Association