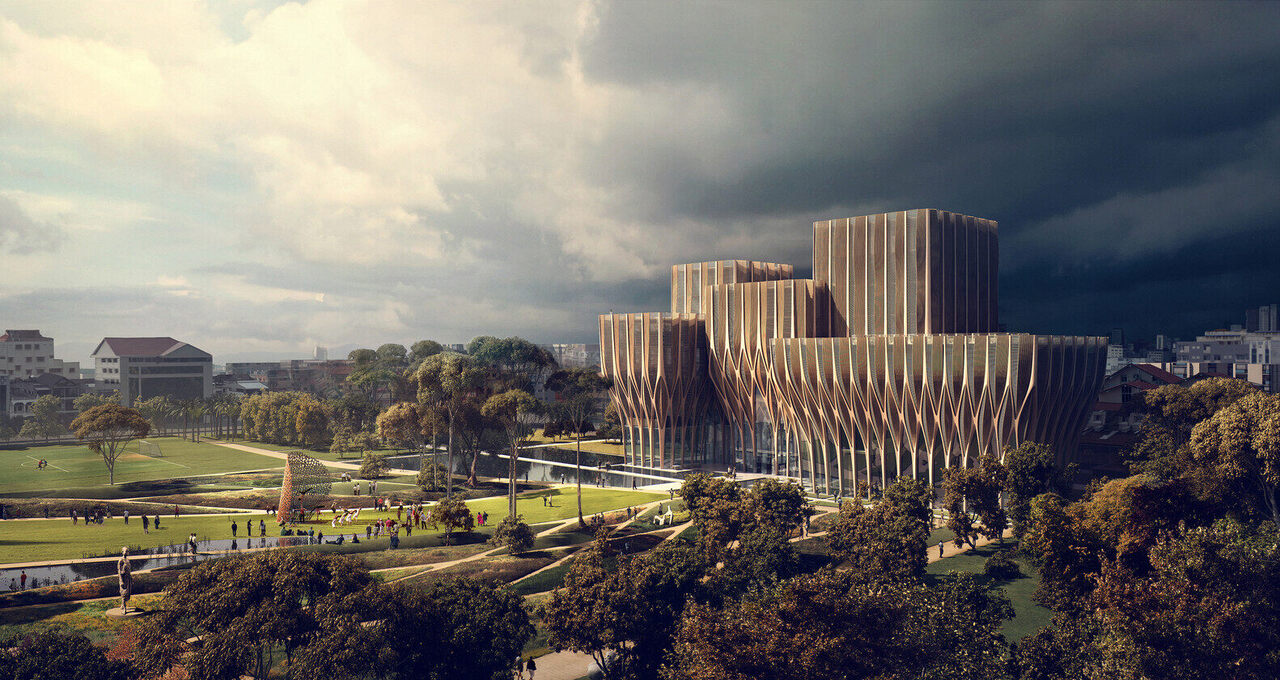 An artist's rendering of the Sleuk Rith Institute. Courtesy MIR/Documentation Center of Cambodia Archives
In This Story
Destination Guide

When Youk Chhang started writing letters to Zaha Hadid, it seemed like a quixotic mission. Chhang was beseeching the world’s most celebrated architect to help him build a genocide museum and research center in a small, wounded country. Eleven years later, books full of Dame Hadid’s designs for the center rest in his Phnom Pehn office, like precious secrets. Chhang has made significant strides in his quest, though the most important step remains.

The fact that Chhang made it to this point—that he even is alive—is a triumph. Like many other Cambodians from his generation, he suffered through horrors during the Khmer Rouge regime: He was tortured for picking mushrooms, and watched as his pregnant sister was cut open and killed under the suspicion that she had stolen rice. The teenager escaped to the Thai border in 1982, as fighting continued, then to the Philippines, and eventually the United States. He finally returned to Cambodia in 1992, where he worked as a UN election observer as the nation began to recover from over 20 years of genocide, brutality, and war.

A world away, Hadid was having a career breakthrough. Years after gaining attention in the architectural world for her creative designs, none of which were ever built, the architect finally found clients to realize them. Her first landmark building, an angular concrete fire station later used as an exhibit space, was completed in Germany in 1993, beginning a long run of success.

In 1995, Chhang became the director of the Documentation Center of Cambodia, or DC-Cam. In his time there, the nonprofit group dedicated to remembrance and reconciliation has GPS-mapped 20,000 mass graves, interviewed 10,000 victims and perpetrators, and collected more than a million documents about the genocide. DC-Cam’s work provided evidence for Khmer Rouge war crimes tribunals and helped Cambodia acknowledge the trauma it suffered through.

DC-Cam also created plans for a genocide center, dubbed the Sleuk Rith Institute, that would combine a museum, policy center, and school. The effort is as much about the future as the past. “It should be a place to heal, a place to commemorate. A beautiful place to look forward. We will turn a horrible past into a better future,” Chhang says. He wanted to break from the usual pattern of big genocide memorials around the world: depressing, heavy, and overwhelmingly male, both in terms of their sensibilities and who conceived them.

Chhang long dreamed of approaching Hadid to design Sleuk Rith, which means “the power of leaves,” referring to religious texts written on palm leaves, many of which were destroyed by the Khmer Rouge. Hadid had a record of making celebrated modern buildings with inventive, dramatic curves, and Chhang saw that as a way to break away from the sharp, masculine angles and doleful sensibility of many museums related to acts of genocide around the world. (When told that someone liked the U.S. Holocaust Museum in Washington, D.C., its designer, James Ingo Freed, was quoted in The New York Times saying, “You’re not supposed to like things like that. So I say: ‘Oh, yes, you did see it? Too bad for you, it was such an awful experience.’”) Hadid was born and raised in Iraq, and Chhang thought might help her understand Cambodia’s situation, he says.

She also happened, by then, to be one of the most famous architects alive.

So Chhang, like a starry-eyed fan, began writing letters to the London office of Zaha Hadid Architects (ZHA), asking if she would consider designing the institute. The firm saw requests from people around the world and could only accept a tiny number of them, so Chhang turned up the charm. “I made her a birthday card with a picture of Angkor Wat. I sent her folktales from Cambodia and a story I heard from a woman in a small village,” he says. He implored her secretary to make sure his letters found their way to Hadid personally.

Eventually the architect invited Chhang to the firm’s London studio. He flew there by himself, stayed with a friend to save money, and met with Hadid and about 15 other architects. Impressed at the pitch, the firm accepted the project and sent a team to Cambodia to learn about the country to inform their work.

In 2014, after two years of work, the firm unveiled a design based on five intersecting “volumes,” or sections, each dedicated to one main function: a library holding DC-Cam’s documents, a graduate school on genocide and human rights, a research center to influence policy and discourse, a media center, and an auditorium. The primary building material is wood, which helps distinguish it from similar sites, usually made from stone, metal, and glass. “There was a deliberate intention not to follow a typical path of memorial architecture as it’s normally or historically expressed—the heavy austere monumentality that’s in some ways depressing,” says Craig Kiner, a senior associate at ZHA who helped lead the design process. “It’s much more light and uplifting and delicate, which is something we talked about at great length with Youk and the team. It represents tranquility and hope and healing—for everyone in Cambodia but also for everyone who visits the building,” he says.

Unfortunately, Hadid herself will never get to see the building realized. She died of a heart attack in 2016, leaving a grand legacy and a number of designs that, like the Sleuk Rith Institute, are yet to be completed.

DC-Cam is now trying to turn the striking plans into a real place. Raising money for construction is a central need, but it is one that Chhang reframes. “It’s not a question of cost. It’s a question of the principle of engagement. We want it to be for victims and survivors. They [developers] want it to be a business.” Chhang says that the developers he’s negotiating with want to put Sleuk Rith on a small property, but Chhang insists that it needs about 15 acres, so it has a peaceful environment. “I think it needs a landscape. For them a landscape is a waste of villas.”

It would be easy enough to find space for the institute in the countryside, but Chhang insists on it being in Phnom Penh, close to the country’s political center, accessible to everyone from Khmer Rouge victims to Cambodian officials to international leaders and tourists. Finding a big-enough plot within the city limits is an as-yet-unmet challenge. As for whether the institute will look suitably dignified in a bustling city going through an often chaotic development boom, Chhang is unworried. “When you are beautiful, it doesn’t matter what you wear,” he says. “I like competition. I’d like to see a nearby casino compete with Zaha’s design. Let’s see who’s the winner. I have complete trust over Zaha’s design.”

Chhang says he’s confident DC-Cam will reach an agreement with developers and funders and get the center built, possibly one “volume” at a time. “People have talked about Sleuk Rith costing $55 million or $65 million. But there were two million lives lost. The cost is almost nothing,” he says. Projects like this often take a decade or so, he says, and DC-Cam has put six years into realizing Sleuk Rith, though he declines to adopt a specific timeline. “We work on this every day. I work on the costs every day,” he says.

Kiner says ZHA is working with DC-Cam to smooth the building process. “It’s something that we’re very committed to delivering,” he says.

Though Hadid’s name and reputation attract a lot of interest from developers and the public, not everyone appreciates the center’s approach. “Like almost every project in Phnom Penh, these images simulate that the building rises majestically from the lower structures around, embedded in a lot of greenery,” says Moritz Henning, a Berlin-based architect who studies Cambodian postcolonial architecture and published a guide to Phnom Penh architecture last year. “Why does every project have to be unique, stand out from its surroundings, or better: rise above its surroundings?” he wrote in an email.

“For me, the architecture refers much more to religious buildings, to Gothic cathedrals (and in this respect it fits, people there also wanted to make people small) than to Cambodian architecture,” he says. “Please don’t misunderstand me, I’m not against the Sleuk Rith Institute. I think it would be great to have a place like this in Phnom Penh. But I’m very skeptical if this is the right way to go.”

Chhang sees the design-forward but still monumental approach as a way to draw the world’s attention to Cambodia and, likewise, connect the country with humanity as a whole. “The genocide center isn’t just about Cambodia. It’s about Armenia, Bosnia, Burma. That’s why I chose contemporary design, why I chose Zaha—to bring Cambodia out into the globe,” he says. “In Cambodia, there were lots of young girls like Anne Frank. There’s a lot of ways you can see the similarity. Why? Because we are all human beings.”

Dutch colonists committed genocide to secure a spice monopoly. But there's more to the story.
nazis

The Misunderstood History of the Balkans' Surreal War Memorials

As viral images, the so-called "spomeniks" of the former Yugoslavia are often taken out of context.
architecture

Nostalgia, tourism, and a desire for relevance help drive the trend.
abandoned

Join us for a daily celebration of the world’s most wondrous, unexpected, even strange places.
Video • Gastro Obscura

Their culinary legacies, written on scraps of paper or fabric, tell stories of hope and resistance.
Read more
Thanks for sharing!