What It's Like to Be a Haunted House Worker Inside a Real Prison - Atlas Obscura
Want to see fewer ads? Become a Member. 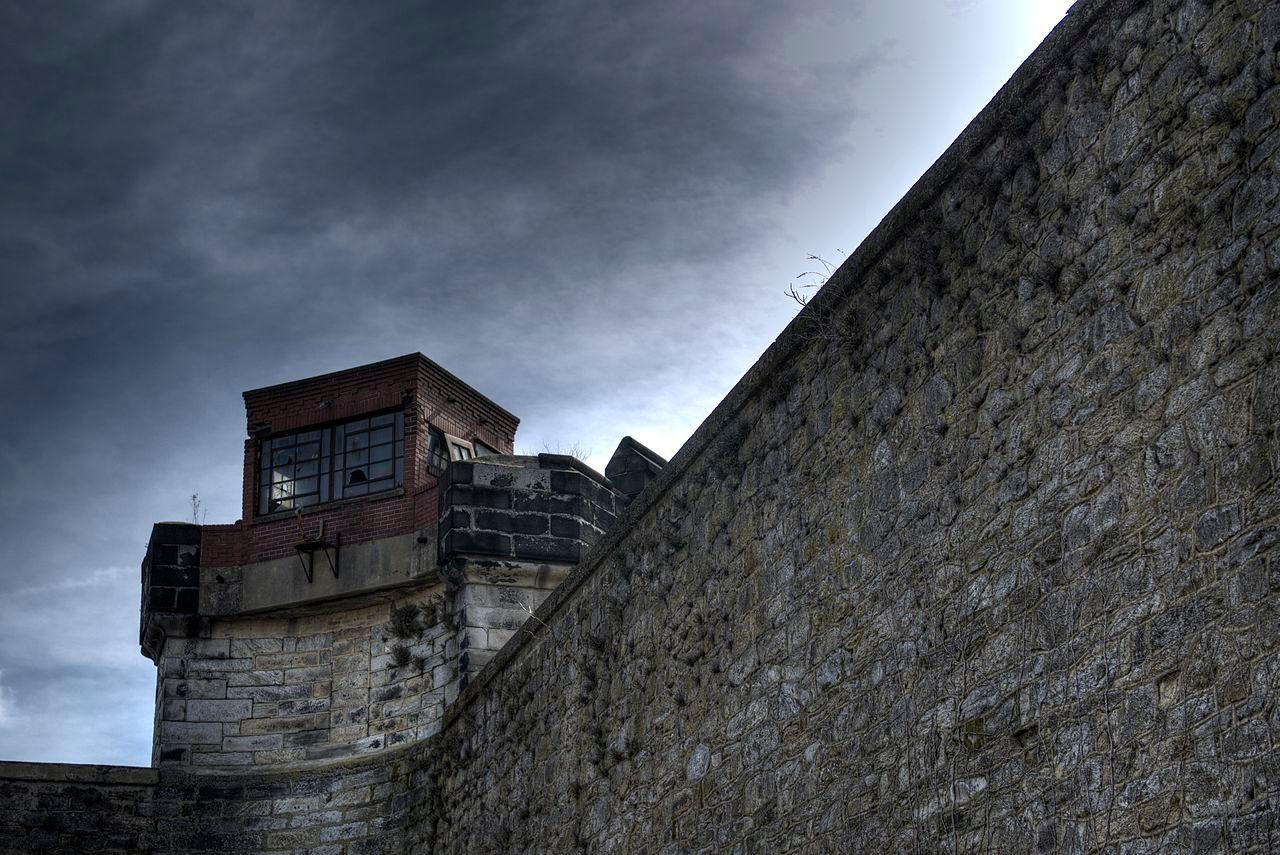 My manager, Joe, emerged from the darkness, surrounded by fog. His towering frame was draped in distressed coveralls, his face transformed into a horrific, demonic skull. He offered me a clementine from his pocket.

Joe’s job was to watch over the monsters of Night Watch, the very last zone within Terror Behind the Walls—the haunted house inside Eastern State Penitentiary in Philadelphia. My job was to be a monster, at least as far as thousands of visitors were concerned.

Upon its opening in 1829, Eastern State Penitentiary became one of America’s most expensive facilities. The grounds included 450 cells on 11 acres of land, with plumbing and heating—luxuries that not even the White House had at the time. Then as now, the outside of the building is a striking display of cold, gothic architecture meant to be intimidating to those who enter the property.

Walls that tower over 30 feet high and eight feet wide guard the prison, while several watchtowers line the perimeter. The blueprint of the penitentiary is relatively simple – seven original cell blocks connecting to one central point, the Rotunda. From here, guards could have a clear view down each cellblock, with 30-foot barrel vaulted hallways with windows throughout. Eventually, mirrors would be added as a security tool for the guards so they could watch their backs from the Rotunda.

After the construction of the penitentiary, over 300 prisons worldwide were based on its plans. Over the next 142 years, Eastern State Penitentiary housed approximately 75,000 male and female prisoners who had been convicted of a number of crimes, some of them never making it out alive. When it closed in 1971, it had 15 cellblocks with 980 cells. In 1994, the penitentiary became an official historic site.

Eastern State Penitentiary still stands today, but it’s now surrounded by a series of shops, cafes, and bars in what has become a trendy part of Philadelphia—but don’t let this fool you. City residents have long believed the penitentiary to be haunted, with the first reports dating back to 1940. Although most of the staff at Eastern State do not believe there are spirits, there are many people who claim to have had paranormal experiences, including the gang from Travel Channels’ Ghost Adventures and SyFy’s Ghost Hunters.

With such an unnerving reputation, Eastern State turned to hosting a haunted house to raise money for repairs in 1991. In its early days, the event included short performances and accounts of prison violence. In 1995, the event was rebranded as Terror Behind the Walls and became a full-on haunted attraction. The house specialty is the startle scare, typically a fast, simple scare intended to be powerful.

One of my favorite startle scares, and where I dropped my first body (a term in the haunt industry meaning to scare someone so severely that they lose control and drop to the ground), was the Spinning Barrel. To do it, I stood inside of a metal barrel that was equipped with a sliding pocket door on either side, giving me the opportunity to pop out and startle those who entered my area. I dropped dozens of bodies, teenagers and parents alike, and even had one girl scoot away on her butt, unable to walk.

While a run-of-the-mill haunted house is typically held at an amusement park or cornfield, Terror Behind the Walls is held inside a place where the residue of pain, torture, and repentance is still fresh. With alleged punishments like The Water Bath, a practice in which an inmate would be dunked in a bath of water then hung from an exterior wall to freeze overnight; and The Mad Chair, where prisoners would be tightly strapped for days, sometimes until circulation stopped, making amputation necessary; it’s no wonder many people believe the building still houses tortured souls. Reports range from hearing voices to seeing faces, shadows, and even full-body apparitions.

A few years after my first visit to Eastern State, I attended an open casting call for the haunted house and later auditioned in a group. After that, I was lucky enough to secure a spot for the 2012 season. The haunt is divided up into several zones, each with their own zone manager, and a theme that changes every few years.

The entire cast and crew, totaling over 200, attends orientation in the Rotunda—a few feet away from Al Capone’s cell and the very space prison guards stood— to get a rundown of the rules and learn more about how the haunt works. We learned that above all else, we were to respect the grounds and the history of the building, and instructed to never break character unless it was an emergency.

After being assigned our zones, we were trained on several types of scares and how to perform in a way that was both frightening and fun. We learned startle and “intimidation” scares, how to “scare forward” to keep the lines moving, and even some phrases in a different language that we used to communicate with colleagues to accommodate guests in wheelchairs or walkers without breaking the reality we’d so carefully created.

Halloween season at Eastern State officially begins when the gargoyles known as Frank and Carson are set up. Their installation signifies the opening of one of America’s top haunted houses, which runs for about six weeks with movie-quality set decor and elaborate special effects. Thousands of people attend Terror Behind the Walls each year and all of the profits go toward restoration of the prison so it can continue to serve as a museum.

Each zone has several rooms, its own specific set of costumes and makeup, as well as a call time. Once you arrive for your shift, you’re greeted by the Philadelphia Police, who are stationed outside each night, as well as the Street Team; this group is responsible for entertaining the people waiting in line. Finally, the Artistic Director and Zone Manager kick off the night with a call and response chant of “What time is it?” “Terror time!”

After entering through the very doorways the prisoners did more than a century ago, I got into my monster costume and went off to makeup, where professional cosmetologists apply SFX makeup and masks to all of the actors. I’d then hit my assigned space and wait to scare people, surrounded by fog and a soundtrack of ghostly dogs barking, a wailing prison siren signaling an escape, disembodied voices pleading for help, and guards making demands.

I was decked out in a denim jumpsuit complete with diseased bulbous lumps, blood stains, and sludge. Our makeup changed throughout the season, though I only wore latex once—after breaking out in a red, itchy rash we discovered I had a latex allergy. I primarily wore a combination of airbrush makeup and blood applied nightly, but I was envious of my rash-free colleagues who were able to wear disturbingly realistic prosthetics.

I started out as a scene actor in the haunt’s final room. Here, I played an employee who was witnessing a stunt gone wrong as my coworker was “electrocuted”. The biggest scare I achieved in this room was when a man wrapped his arm around my waist, thinking I was his wife. As we made eye contact, I could see the color drain from his face while he grabbed his son, called for his wife, and bolted for the door.

But in our claustrophobia room, an area where the guest has to squeeze through a room surrounded by walls closing in on them as actors swoop down from above, some even hanging from the ceiling—it was difficult for me to see through the thick fog and the laser lights well enough to accurately time my scares. I hit my stride when I was given my own room, where I could utilize hidden windows and creep through doors to startle those who passed me.

Through my time there, I never lost sight of the fact that I was working in a prison where people were incarcerated, kept away from their families and isolated from other inmates. I leaned against walls and sat upon floors where men and women were locked up, likely in areas where bloody fights broke out and murderous souls stewed; even the restroom made available to the cast was original to the prison.

During any given shift, you see hundreds of people. Cast members didn’t leave until the last person in line had finished the haunt, which some nights meant you clocked out well after midnight. After getting changed back into my human clothes, I’d hit the makeup stations with my fellow monsters to remove my makeup with a combination of men’s shaving cream and baby wipes.

Over the season, I dropped bodies, had people scream prayers and loudly sing Christmas carols to deter me from scaring them, and learned how to use a flint stick. The flint stick was my favorite tool to use, as a simple strike released a shower of sparks that while modest, terrified the guests. I used it most often when I was at the beginning of the zone with another actor, John. I was the distraction before John would come sliding in, sending audience members screaming through to the next room.

Despite the inebriated guests, the cocky teenagers, and the protesters outside (who believe the haunt is disrespectful to those who spent time there), working as an actor at the Eastern State Penitentiary was thrilling and memorable. Dropping bodies became addictive, and working to preserve a historical site was rewarding.

My first—and hopefully last—time in prison evolved into one of my favorite jobs—and certainly the strangest. However, I will never forget being so close to misery and steps away from death row, all the while playing a monster within a reportedly haunted prison where I had the chance to scare Guillermo Del Toro and Philadelphia Eagles players.

The "Mystery Man with 21 Faces" mocked the police ruthlessly and stocked Japan's supermarkets with cyanide-filled candy. To this day, no one knows who they were.
Video

2:59
Want to see fewer ads? Become a Member.
From Around the Web
THE GASTRO OBSCURA BOOK
Taste the World!
An eye-opening journey through the history, culture, and places of the culinary world. Order Now