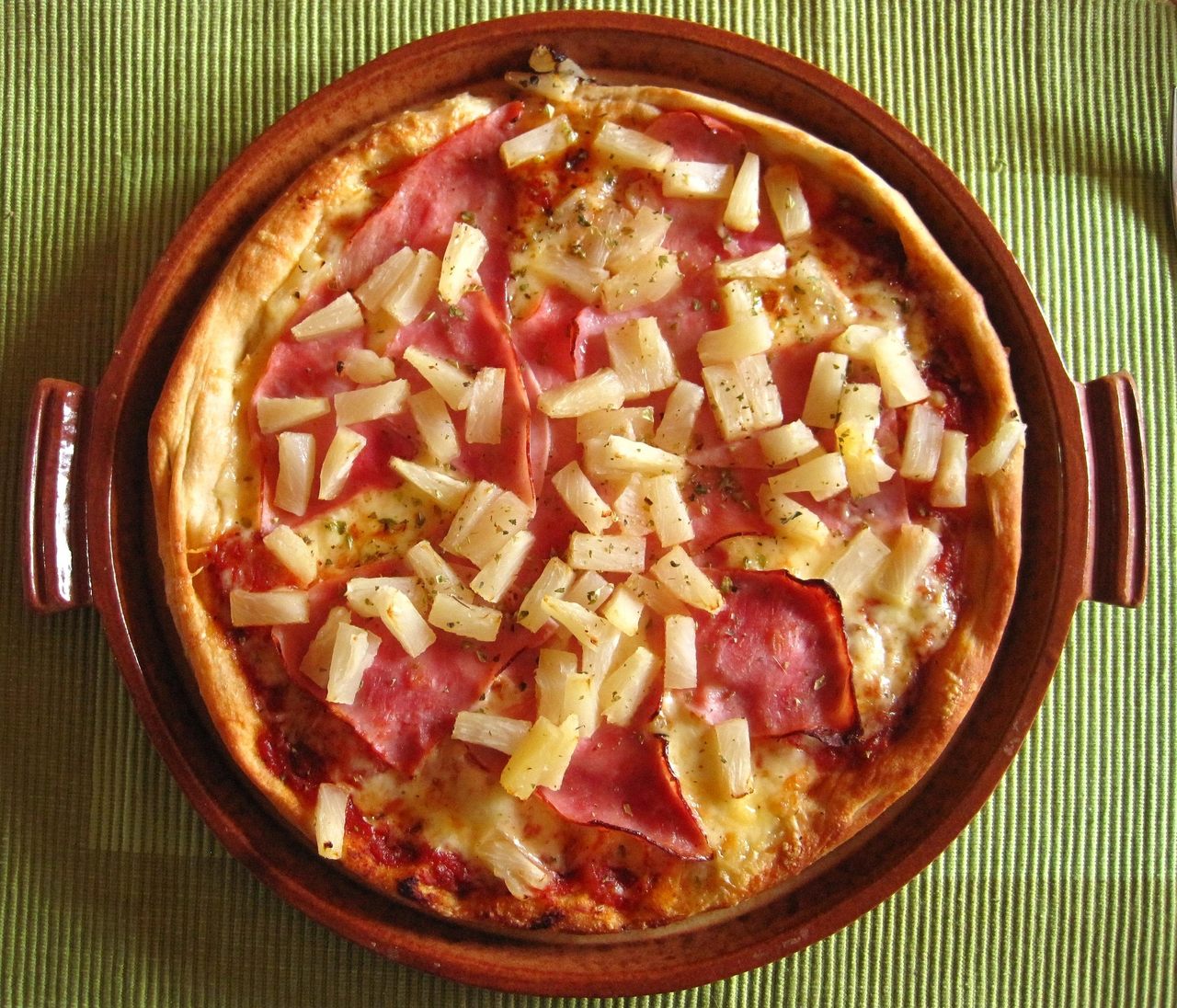 The Hawaiian pizza is actually a Canadian classic. Public Domain
In This Story
Destination Guide

Pizza has been a core food for North Americans for so long that we forget that it is, relatively speaking, a new dish on our shores. Most people over the age of about 75 can remember the first time they ever saw, heard of, or tasted pizza; the New York Times first introduced the dish to its readers back in 1944.

But Sam Panopoulos*, 81, of London, Canada, a small city about halfway between Detroit and Toronto, can take it one step further. He can remember inventing what’s now one of the most popular pizzas in the world: the Hawaiian pizza.

The Hawaiian pizza doesn’t come from anywhere near Hawai’i. It comes from Ontario, and was concocted in 1962 in a restaurant serving typical mid-century food without any particular focus. Since its creation, it has become a divisive and fiercely debated entry in the pizza lexicon; a reader-created post on BuzzFeed even called it “the most insulting and offensive pizza in the world.”

Melding canned pineapple and small squares of ham atop a regular cheese pizza, the Hawaiian is a niche pizza. In North America, you would never buy it for an office party or to feed hungry friends at a bar, at least not without a thorough interrogation to find out each eater’s stance on the pie. Pizza is a dish that is universally loved in the U.S. and Canada, but Hawaiian pizza is, very often, despised.

Sam Panopoulos left Greece on a boat bound for Canada in 1954. His first exposure to pizza was in Naples, where the boat briefly stopped. Naples reigns as the worldwide birthplace of pizza, but even there, it’s a fairly recent creation. As the story goes, the cheese and tomato-laden version of the dish that we recognize today was first baked in 1889 to honor the Italian monarchs King Umberto and Princess Margherita, who were visiting the city. Enter the now-classic margherita pizza.

Panopoulos didn’t know anything about pizza’s history; he just knew that the pie he had during his brief foray into Naples was pretty tasty. When he got to Canada in 1954, he settled in the town of Chatham, an hour from the border with Michigan. Panopoulos, who speaks with a thick Greek accent after 60 years in Ontario, achieved success early on, opening a restaurant called the Satellite in Chatham, which still stands (it’s now under different management).

“Pizza wasn’t known at all, actually,” says Panopoulos in a phone interview. “Even Toronto didn’t know anything about pizza in those days. The only place you could have pizza was in Detroit.”

Soon, pizza landed in Windsor, a Canadian city just across the river from Detroit. However, thanks to the execution, it wasn’t especially popular there. “I visited Windsor, and the pizza in those days was three things: dough, sauce, cheese, and mushroom, bacon, or pepperoni. That was it,” says Panopoulos. “You had no choices; you could get one of the three [toppings] or more of them together.”

The mushrooms were canned, the dough was pre-made and bought in bulk. The ovens were small electric ovens, certainly not suitable by modern standards. A standard pizza oven today cooks at around 800° Fahrenheit to achieve the charred crust we associate with good pizza. Panopoulos’ oven, and the ovens of the other pizza sellers in Detroit and Ontario, were nothing more than a standard apartment oven.

“The pizza in Canada in those days was primitive, you know? In the States and Detroit and all this, it wasn’t bad, but it was nothing special,” says Panopoulos.

Panopoulos’s diner cooked the sort of food that people ate in the 1960s: pancakes in the morning, burgers and fries for lunch, and liver and onions for dinner. But he was eager to try out any new dishes that might entice customers. At one point, he hired, he says, an Asian cook and put him to work making American Chinese food. Later came pizza.

After watching how pizza cooks in Windsor were making their pies, he came home to Chatham and started experimenting. The concept of pizza was totally foreign to his customers, and even to the general public. A 1962 recipe from the Toronto Star included a recipe for “Spanish pizza,” a strange concoction of yellow rice and Vienna sausages, piled on a dough made from biscuit mix.

There weren’t even pizza boxes for quite a few years. Panopoulos said that he used to cut circles out of cardboard boxes he got from a furniture seller next door, place the pizza on top, and wrap the whole thing in aluminum foil.

Without really knowing or caring much about any traditions regarding pizza, Panopoulos began throwing together combinations to see what worked. Some of his discoveries were simultaneously discovered by other like-minded pizza pioneers, like the addition of salty toppings like olives and anchovies. But the pineapple was something else entirely.

Hawai’i had only become a state in 1959, and soldiers coming home from World War II brought back tales of an island paradise in the South Pacific. Tiki culture, epitomized by fruity cocktails like the mai tai, became hugely popular from the 1940s through the 1960s. Canada wasn’t immune to the charms of Hawai’i, either, and canned pineapple became a staple of every household, advertised by grocery stores relentlessly in newspapers throughout Ontario.

“In those days, the only sweet and sour thing you would get is Chinese pork, you know, with the sweet and sour sauce,” says Panopoulos. “Otherwise there was no mix.”

He was already serving Chinese food at the Satellite, and felt that people would connect to sweet and savory flavors together. So one day in 1962, he took down a can of pineapple, drained it, and threw the pieces of fruit on a pizza.

“People said ‘you are crazy to do this,’” Panopoulos remembers. But he liked it immediately, and starting advertising his crazy new pizza topping. Amazingly, it caught on. The classic union of ham and pineapple was an accident, a result of only having a few different toppings to work with.

Originally, Panopoulos did not market it as the now-set combination of tart pineapple and savory ham or salty bacon. But the inventor called his new creation the “Hawaiian pizza” from the start, and it quickly solidified into the version we know today. He told me more than once that he wishes he’d found a way to register or patent the pairing.

I ask Panopoulos if he still orders it today. “Yeah, I do,” he says. “I still like it.”

Do you want a slice of American cheese on that?
art

Before your favorite tools, cooking was hell.
science

A horror movie proved an unlikely source of inspiration.
Video • Wonder From Home