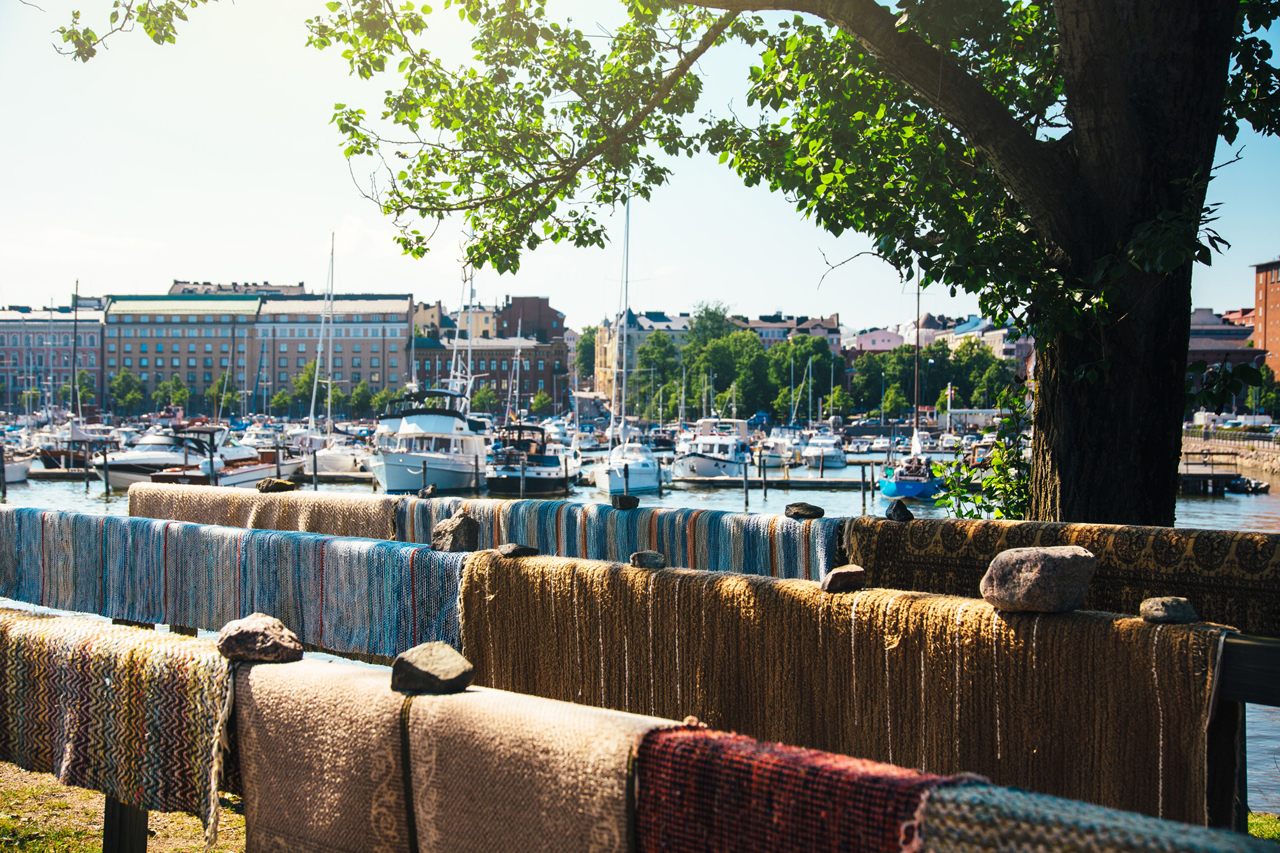 On a sunny August morning, a traditional family outing is taking place in Helsinki, the Finnish capital on the banks of the Baltic Sea. Children are equipped with typical seashore paraphernalia: beach toys, fishing rods. Parents carry beer and picnic baskets—but today, they are also lugging a thick carpet, a bucket, a wood brush with plant-based bristles, and a bottle of pine oil soap.

These Finns are about to participate in an age-old tradition: cleaning carpets by the seaside. The family heads down to a wooden pier where other families have gathered, each with their own carpets, brushes, and buckets. At the pier, they hang their carpet over the edge and proceed to throw buckets of seawater at them. When they are nice and sodden, they lay the carpets on tables built into the pier, apply the liquid cleanser, and scrub. Finally, they again hang the carpets over the edge of the pier, throw more water at them to rinse off the soap, and leave them to dry. While the parents are doing this, kids are playing nearby. Some have been having fun jumping off the pier into the sea. Others visit the nearby ice cream kiosk.

This scene plays out at one of Helsinki’s 13 mattolaiturit, or carpet piers, built especially for this activity along the Baltic Sea. The city even has a map of them, featuring around 20 additional “carpet cleaning points” in the surrounding areas. Probably the most popular carpet-washing pier is right off Kaivopuisto, one of the oldest parks in Helsinki. It hosts a chic café called Mattolaituri where locals can soak up the sun, drink champagne, and clean their carpet all in the same vicinity.

In both rural areas and big cities, outdoor washing has been part of the Finnish landscape and culture for decades. It is as popular an activity as White Night cultural festivals. The portrait of an outdoor laundry washer by the painter Pekka Halonen, called Avannolla, even hangs in the Ateneum, part of the Finnish National Gallery. But why are Finns so obsessed with washing their carpets by the seaside?

Mikko Lindqvist, a local historian at the recently opened Helsinki City Museum, says that waterfront cleaning began as a rural practice. “We have a lot of lakes,” Lindqvist says. “It was common to wash your laundry in lakes. Then, country people started moving to the city, bringing the rural practice, and it became an urban phenomenon.”

In the museum archive, Lindqvist points out some turn-of-the century photos of carpet-cleaning piers, including works by the photographer Volker von Bonin, who focused on everyday life and leisure in Helsinki. Lindqvist then shows off an image of a woman doing her washing in a “Pyykkäreiden,” or laundry painting, by the Finnish expressionist Tyko Sallinen. “If you look at this picture it shows blue lakes, fresh water,” Lindqvist says.

That’s the first thing you need to know about Helsinki carpet washing. It’s considered cheery and rustic, not a chore. These Finns, Lindqvist says, are “really enjoying the pier.” The design and materials of these piers haven’t changed much over the years, he notes. “They are really vernacular structures without any interference of architecture.”

Typically, people come early in the morning to wash their carpets, which are usually made from cotton or wool. Then they spend the day swimming and sunning while they wait for the carpets to dry. (Sometimes, a carpet can take two days to dry, in which case Finns have to trust their neighbors not to steal it.)

Lindqvist says that in the early days of Helsinki, residents washed all kinds of laundry in the Baltic. But as the city grew, the seawater was polluted by industry and settlement. “From the 1870s the water system was monitored and the city determined that it had to instigate a laundry campaign,” he says. “Gradually it was not good enough for laundry. Newspaper articles told about infectious diseases that could be caught from washing blankets and bed linen in seawater.”

But carpets were a different story. The city promoted the idea of using collected rain water and gray water for washing, and fresh sea water for rinsing them. At the same time, some Finns tried moving carpet-cleaning away from the coast: In the early 20th century, an inland carpet-washing center opened in the working class (now gentrifying) Kallio neighborhood. Lindqvist says this was not popular. “Baltic Sea is brackish water, the salty aspect is pleasant and makes the carpet smell like fresh clean air,” he says.

More recently, amid environmental concerns, an inland rug washing station opened in the city’s Pukinmäki neighborhood, where dirty and soapy water is diverted into the sewage system. “This initiative got quite a negative reception,” says Jari-Pekka Pääkkönen, of the municipality’s water protection department, which is in charge of monitoring the state of the sea in front of Helsinki. And so, “the city council decided that existing piers will stay.” This sits well with locals. Whenever talk of closing down the carpet piers arises, members of several “pro-mattolaiturit” Facebook pages get pretty vocal.

Pääkkönen’s department produces data for decision-making about the city’s waters. They say that traditional, biodegradable liquid pine soap does not badly affect the seawater. “There are signs at the piers which instruct users to use only solvent-free soaps such as this,” Pääkkönen says. (The piers are designed so that visitors wash and rinse with buckets of seawater on the pier’s tables, so that the pine soap does not run straight into waterways.)

In July, Pääkkönen visited all the piers, and says they seemed to be doing well. “With current maintenance, carpet-washing will continue for years,” he says.

Lindqvist also hopes that the tradition will continue to thrive. “It is my hope the culture should remain,” he says. “It’s the pleasure of being on the coast, and enjoying summer days and the fresh aroma of carpets.”

“I see the collection as a tool for uncovering what is already there."
automotive history

This vibrant culture never faded away in the city's Mexican American community.
objects of intrigue

It is said the English monarch wore the sleeved waistcoat at his public execution in 1649.
culture

A photographer captures perseverance and pride over a decade of the Bill Pickett Invitational Rodeo.
Video