The Fight to Save One of Dakar's Most Distinctive Markets - Atlas Obscura
Want to see fewer ads? Become a Member. 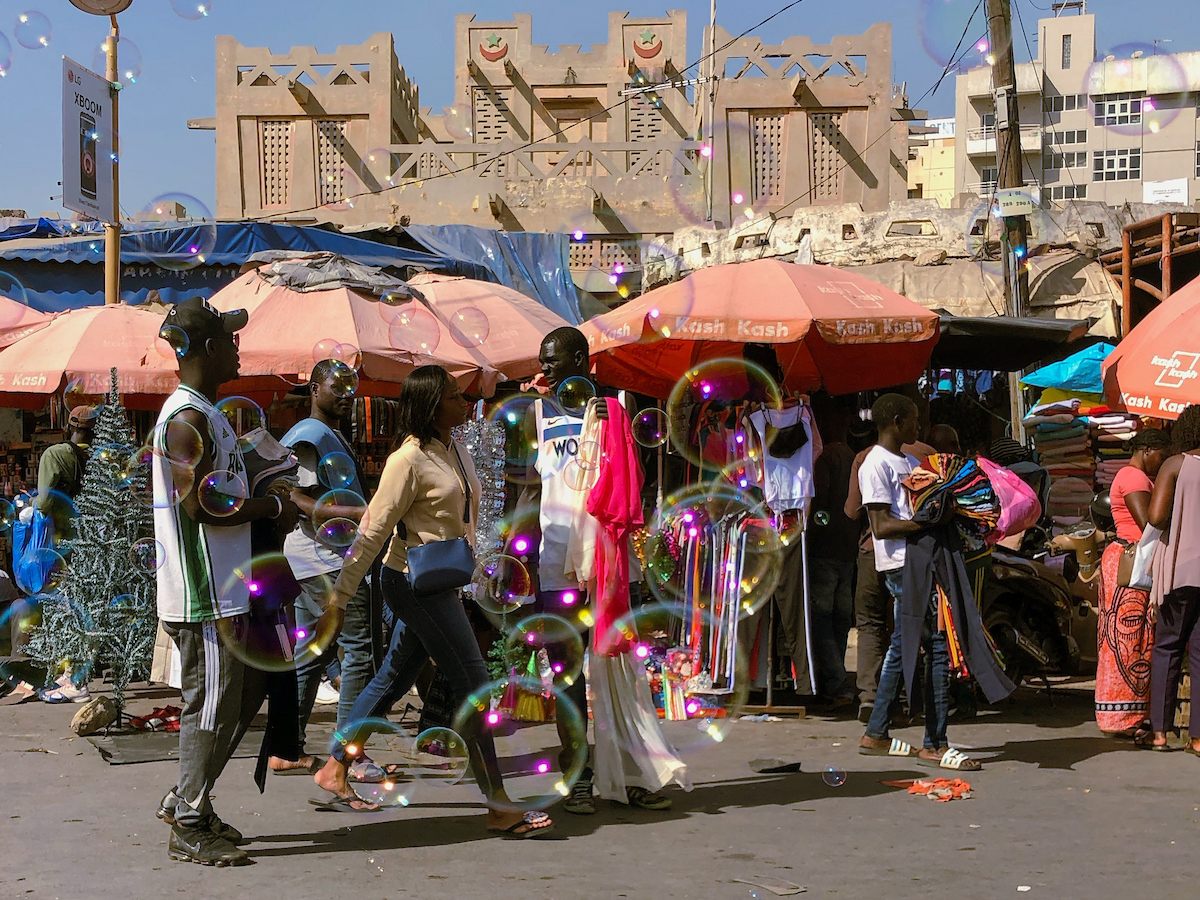 Sandaga Market in December 2019, before the government relocated vendors and started to demolish informal stalls. Many of these vendors are selling clothing, but one blows bubbles from toys for sale. Ricci Shryock
In This Story
Destination Guide

Days before the July holiday of Tabaski—another name for Eid al-Adha, or the Islamic festival of sacrifice—vendors at one of Dakar’s oldest and largest open-air markets were trying to stop the government from tearing down their stalls. For nearly a century, the distinctive, geometric architecture of Marché Sandaga, or Sandaga Market, stood out from its surroundings on the southern tip of the sprawling coastal capital. But after a fire damaged the historic building and informal stalls continued to sprawl outward, authorities announced a plan to raze hundreds of outdoor stalls and relocate vendors to other parts of the city.

As Tabaski approached and the threat of demolition loomed, the Sandaga Market vendors—who number more than 1,000, according to Daouda Diouf, the head of a local trade association—were still selling their wares in Dakar. There were cheap plastic sandals, gold-colored necklaces depicting the faces of marabout, or revered Muslim religious leaders, and a dizzying array of other local and foreign-made goods. Diouf worked hard to convince the government to postpone the planned bulldozing. The Tabaski holiday calls for buying a sheep to sacrifice, and there’s pressure to buy new clothes for most of the family. The vendors needed as much cash as they could get, Diouf says.

Diouf can hardly remember a time when Sandaga, in the middle of the downtown Plateau neighborhood, was not the center of his life. He came to the market as a 10-year-old, sent by his mother from a nearby village to help his uncle sell various wares at a wooden table. “I first and foremost like Sandaga for the ambiance,” says Diouf. When asked to describe it, Diouf says simply, “Laughter.”

Diouf says the bustling market is a network of friendly hustlers who value hard work and human connection above all. “We can meet a friend who doesn’t even have 100 francs in his pocket, but he is joyful,” he says. The market also serves as an employer for young people who want to pay for their education. “All of this is Sandaga, a crossroads of generations, especially also people from different continents.”

Annie Jouga, a Senegalese architect, also has fond memories of how the market bridged generations in her family. Jouga grew up in the Plateau neighborhood and remembers visiting the building with her mother to buy fresh vegetables, fruit, fish, and meat. Her aunt, now 95, attended parties at the building in the 1930s, just after it was built. Back then, it was used as a market in the daytime and an events venue in the evening.

Jouga says the building, which is separate from the hundreds of vendors who popped up along the periphery, should be restored as part of an official national heritage site. She started a petition called “Il Faut Sauver Sandaga,” or “We Must Save Sandaga.”

Built between 1933 and 1935, the market’s Sudano-Sahelien architecture marked a stark departure from the smaller French colonial structures that surrounded it at the time. France would continue to rule Senegal as a colony for another quarter-century, but here was a building with its own homegrown style. “It was a statement,” says Jouga, who is a founding member of the College University of Architecture of Dakar. “It was well-calculated, and it worked. For me, I think that we need to take ownership, because it was inspired from African architecture.”

The city administration has said that it will move hundreds of vendors who throng the sidewalks and alleyways alongside the 90-year-old structure. But it’s unclear what the future holds for the centerpiece building, with its angular, concrete silhouette made from multiple rectangles and adorned with posts that jut out from the sides of the building. The facade is dotted with small, geometrically perfect openings in the shapes of triangles, trapezoids, and squares.

Jouga says that city and federal entities, including the mayor of the Plateau neighborhood and the national Minister of Urban Renewal, are jockeying for differing plans, and the survival of the building itself is not guaranteed. Jouga insists this is the most essential element of any plan for Sandaga Market. “Visitors come to see Sandaga, because it has value,” says Jouga. “If we can improve the interior, we can make it even more valued, even better—but the monument itself has value, and we don’t have the right to cut it down like that and make something else.” (Senegal’s Minister of Urban Renewal did not respond to requests for comment.)

The building has not housed vendors since 2013, when a fire damaged the interior. Diouf remembers the event and calls it a shock, but says the structure itself is only part of the place. “Sandaga goes way beyond the building. Everyone knows that the Sandaga Market is a heritage,” he says from his shop, where he sells sunglasses and purses just across the street from the original building.

Today, Diouf has moved up in the vendor world: He no longer sells wares from a wooden table or an informal metal canteen, as his uncle did decades ago. “There is not a Senegalese businessman who has not been through Sandaga,” he says. “There is everything from local traders to those who go so far as to invest abroad. Sandaga served poor parents whose children became statesmen, raised on what their parents earned in the market. Others have migrated. All of this is important and must be preserved.”

Just before Tabaski, in late July, the government decided to halt the demolition of informal vendor tables, to give sellers a little longer to save up before the holiday. Entire outfits could be cobbled together from the stalls: Secondhand dresses and bags hang alongside plastic and faux-leather shoes. Locally made purses, shoes, and necklaces are available for purchase, as well as the long, beaded strings of ‘bin-bins’ that seductively encircle a woman’s waist. Visitors could dodge the downpours of the rainy season by ducking into one of the hidden roadside entrances, which gave way to an interior labyrinth of even more market madness. Ahead of the holiday, tailors were weaving long, colorful robes known as boubous, and their sewing machines created a cacophony almost loud enough to drown out the rain.

A few days later, demolition resumed. Even so, each day vendors manage to skirt new restrictions and pop up in new spots along the sidewalks and alleyways. The Sandaga Market may be empty, but its community is still very much alive. As Diouf puts it with a smile: “Sandaga is for everyone.”

An architect has worked to save Aliano's unusual facial features, thought to ward off the "evil eye."
ships

A historic structure in Japan is making its way to California.
architecture

When Trenton's streetcars came to a halt in the 1930s, one literally found a home.
ruins

Should Casablanca's Iconic Buildings Be Saved?