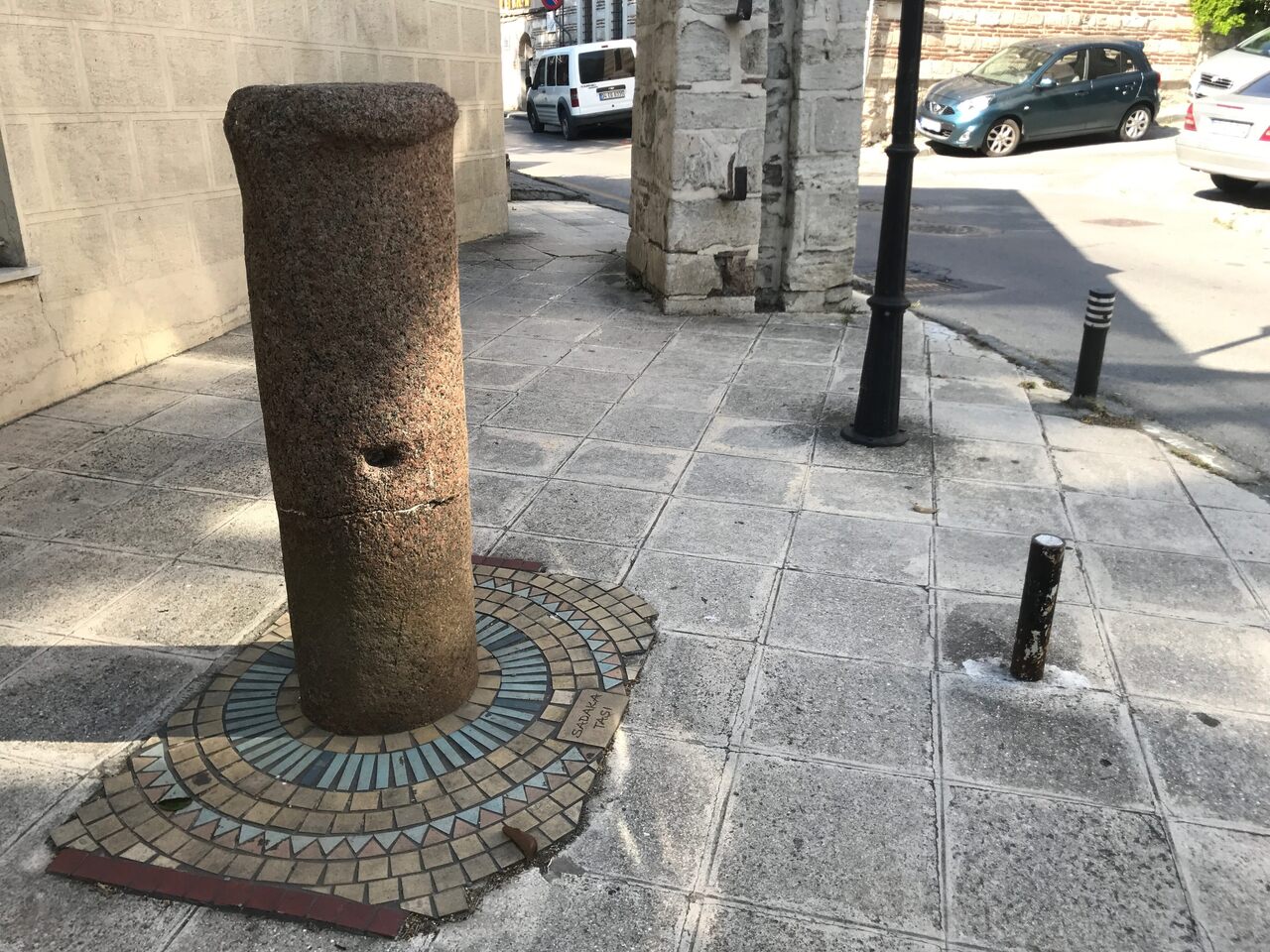 One of the best preserved charity stones in Istanbul, outside the İmrahor Mosque in the Üsküdar district. Jennifer Hattam
In This Story
Destination Guide

On a typical Friday at midday, the racks at the entrance to the Dedeman Mosque in northern Istanbul would be full of shoes, doffed by members of the congregation before they enter the building for the most important Islamic prayer of the week.

But when Turkey suspended mass prayers in mid-March, to try to stop the spread of the COVID-19 pandemic, those racks stood empty. And as businesses around the city shut their doors, the mosque’s young imam, Abdulsamet Çakır, knew that the pockets of some members of his community might soon be empty as well.

“On the day the mosques were closed to communal prayers, I dragged the shoe racks into the garden to clean them off and then filled them with some groceries I bought,” says Çakır. “Then I called up some of the people in the neighborhood who I thought might be in need and invited them to come take what they wanted.”

Word of Çakır’s initiative spread quickly. Soon it was drawing recipients from all around Istanbul, and donors and media attention from across Turkey, and even abroad. But what seemed like a novel idea for pandemic times was actually inspired by a very old tradition: the sadaka taşı, or charity stone.

“People who had money would leave some on top of the stone, and those who didn’t would take some, according to their need,” Çakır explains.

Though its exact origins are murky, the sadaka taşı tradition is believed to date back to the time of the Ottomans, the Turkish dynasty that arose in Anatolia (modern-day Turkey) around 1300 and grew into a powerful empire, only collapsing after World War I. Charity stones have been found in Jerusalem, Tunis, Ohrid, and other places that were once part of the Ottoman Empire.

(The Ottomans apparently had a penchant for useful stones: Other types recorded include a binek taşı, with steps to help a rider mount a horse; a hamal taşı, on which a porter could briefly rest his heavy load; and a yitik taşı, an alcove that served as a kind of lost-and-found.)

At least 160 charity stones are thought to have been located in Istanbul at one time, but finding them today is no easy task. All that’s left of some are weathered stumps embedded in the sidewalk. Others have been painted over, cast to the side, used as ashtrays, buried under new construction, or hauled away entirely.

Independent cultural-history researcher Nidayi Sevim had never heard of a sadaka taşı before the mid-2000s, when he stumbled upon one amid some of the elaborately decorated gravestones he was studying in the Eyüp district of Istanbul. “It drew my attention because it was different—it had this indentation, this hollow in the top,” he says.

From the scant written sources on the subject, he learned that these stones were typically unadorned pillars three to six feet high, set up in similar locations: in a mosque’s courtyard, a tomb’s entrance, the foot of a bridge, next to a public fountain.

“The logic of having the sadaka taşı up high was that you would have to reach over the top of the stone, so that no one could see whether you were putting money on it, or taking money off,” says Ali Çarkoğlu, a professor at Koç University in Istanbul who studies philanthropic giving in Turkey.

This anonymity reflects Islamic directives that charity be given in a way that both maintains the dignity of the poor and keeps the rich from becoming too prideful.

Following the trail of previous mentions of charity stones in the city, Sevim roamed all over Istanbul’s neighborhoods searching for what was left. He identified about 30 stones or their remnants, eventually writing what was at the time the only book on the topic. Since it was first published, in 2009, he says, some of those 30 have been lost in the constant churn of urban development.

“This is a very important culture, a treasure, but unfortunately one that’s been mostly forgotten, and thus is disappearing,” says Kemal Özdal, chairman of the charitable foundation Sadakataşı Derneği, which carries out humanitarian aid projects in Turkey and abroad, and works to raise awareness about the history of its namesake.

As Imam Çakır’s pop-up food bank shows, however, some of the concepts behind the sadaka taşı live on today in different forms, which have assumed new importance—and continued to evolve to suit contemporary society—during the COVID-19 pandemic.

An estimated eight million people in Turkey—almost a third of the country’s workforce—labor for daily wages outside the social-security system. “When the pandemic hit and their workplaces closed, these waiters, barbers, porters, and others lost their incomes,” says Murat Ongun, a spokesperson for the Istanbul Metropolitan Municipality. Following the shutdowns, a million new people applied to the municipality for cash or food assistance.

The municipality’s initial attempt to start a fundraising drive for the city’s needy was stymied by a political dustup with Turkey’s central government. But the municipality, which operates the local gas and water companies, hit upon the idea of creating a website where families under low-income thresholds could upload their unpaid utility bills, and other citizens with more means could log on to pay them off. To date, anonymous donors have spent 24 million Turkish Liras ($3.4 million) doing just that, paying off nearly three-fourths of the 241,000 bills uploaded.

“We think this campaign was one of the most positive outcomes of the pandemic period,” says Ongun. “This kind of social solidarity is in our nation’s DNA; to capture it, you just need a good idea and a trustworthy method.”

The name of the municipality’s website, Askıda Fatura (“Bill on the Hook”), came from a familiar concept in Turkey: paying for two loaves of bread (ekmek) at a bakery and leaving one literally “on the hook” (askıda) outside the shop for someone in need to take. Signs in bakery windows encouraging customers to participate in this askıda ekmek tradition proliferated during the pandemic, as did other kinds of charitable “hooks.”

In the Cihangir neighborhood, for instance, small markets set up askıda gıda (“groceries on the hook”) corners where people could buy and leave surplus essentials for their neighbors. The district municipalities of Beylikdüzü and Beşiktaş launched dayanışma askısı (“solidarity hook”) campaigns where people could hang up bags of donated groceries at the supermarket or outside their residences—or do so virtually via online shopping—and have them delivered by municipal personnel to the needy.

Similar stories—about anonymous benefactors going into shops and paying off the accounts recorded in zimem defteri (debt ledgers), another practice said to date back to the Ottoman era, and most commonly done during the holy month of Ramadan—also kept popping up in the Turkish media.

“Traditionally in Turkey, people have not made the charitable donations obligatory to Muslims through formal institutions, but rather in cash or in kind to people they know through their networks,” says Çarkoğlu, the professor. “[This] serves to maintain social hierarchy, by keeping the poor in a direct linkage with their patrons. The askıda methods build a barrier against this kind of linkage—people know that whenever they are hungry, they can get something to eat, but they don’t have to kiss the hand of the person who gave it.”

The origins of practices like askıda ekmek are debated. Some say they popped up only in recent decades, perhaps mimicking the caffe sospeso (suspended coffee) concept in Italy, or have been deliberately revived as part of politically minded efforts to recapture a glint of Ottoman-era glory. But Sevim, the researcher, has found evidence that their inspiration dates back even farther than sadaka taşı—back to the early days of Islam itself.

“There’s a story in the Hadith [an Islamic religious text] about the Prophet Muhammad’s time in Medina [in the 7th century], where he instructed his followers to hang up two strings in the mosque and put bunches of dates [hurma] up there, so people could take what they need without sacrificing their pride,” Sevim says. “Like an askıda hurma.”

“These are all versions [of] the same idea,” he adds, musing on how the concept could be further adapted: maybe an askıda bilet (ticket) system on a bus, or askıda maske (mask) for the ongoing pandemic.

“The names can change, the forms can change, but this is a universal method of goodness,” Sevim says. “Not physically as a charity stone, but different versions inspired by them can do great things today.”

What It's Like to Care for the Mighty 'Corpse Flower'

This isn't the first time they've come in handy during a pandemic.
history

Philippe Arnello is the custodian of the daily cannon—a 150-year-old tradition in the coastal city of Nice.
museums

The biggest blow to beer since Prohibition.
Video • Wonder From Home

He was fighting not Normans, but the stigma of mental illness.
Read more
Thanks for sharing!