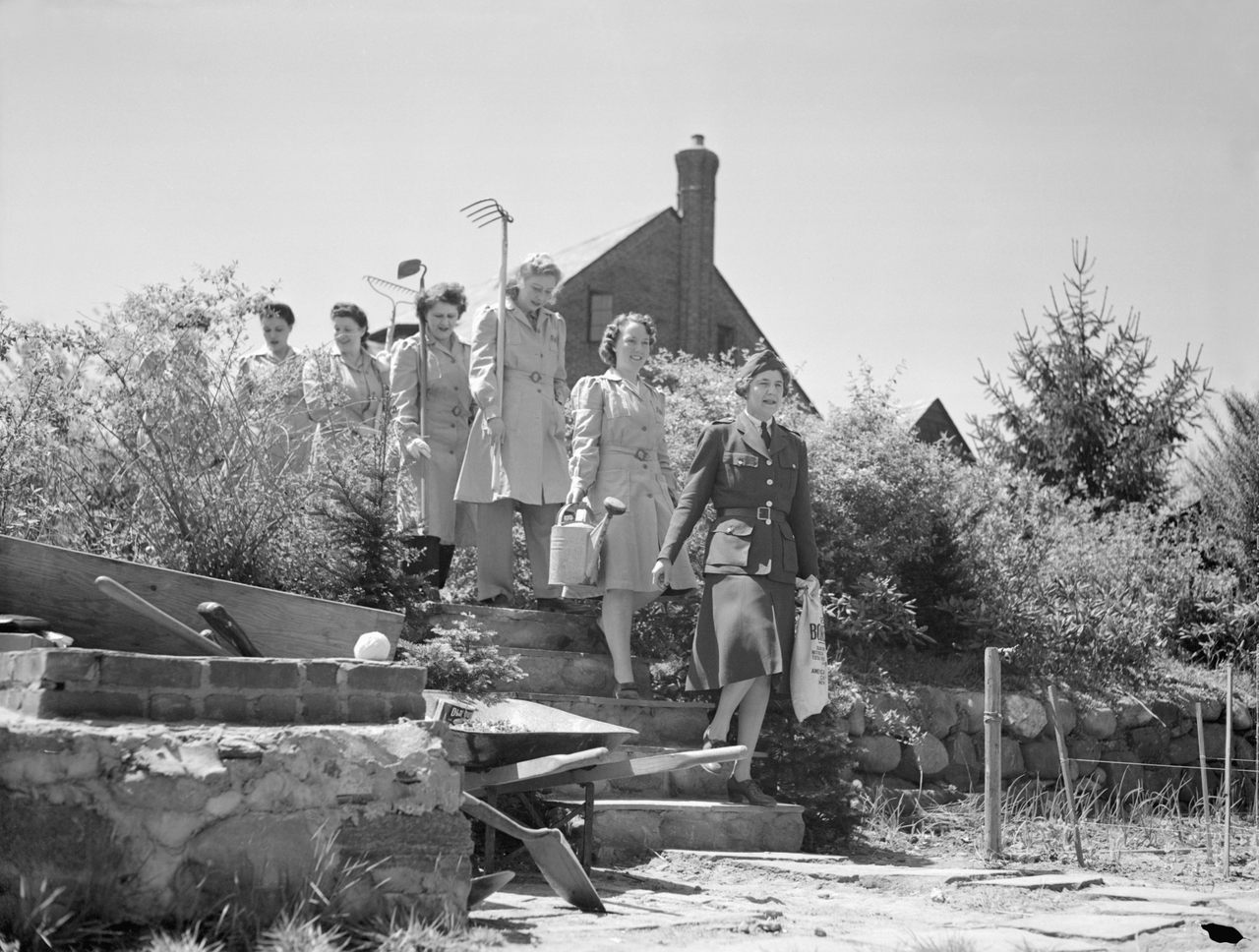 Members of a women's volunteer service in Flushing march into their Victory Garden. Bettman/Getty Images
In This Story
Destination Guide

First Lady Eleanor Roosevelt wanted to plant vegetables on the White House lawn. It was early 1942 and American troops were departing daily for the battlefields of Europe. Her garden would be a small act of patriotism, a symbol of shared commitment and sacrifice recognizable to anyone who had lived through the Great War 25 years earlier—to anyone, that is, except Claude Wickard. President Franklin Roosevelt’s new Secretary of Agriculture believed the war gardens of 1917 and 1918 had been a waste.

“I hope there will be no move to plow up the parks and the lawns to grow vegetables as in the First World War,” he told those who gathered for the National Defense Gardening Conference, which was quickly organized in the weeks after the attack on Pearl Harbor. “I do not think the Nation will benefit at present from a widespread, all out campaign intended to put a vegetable garden in every city backyard or vacant lot.”

When the Department of Agriculture’s Victory Gardens program debuted soon after, it was not the national call to action and triumph of government messaging that we remember it as today. It was, in fact, its opposite. The word went out via public service announcements and agricultural-extension agents: The country, newly at war, needed its farmers. But it did not need its city gardeners.

Eleanor Roosevelt had been a young mother in the elite Kalorama neighborhood of Washington, DC, when the city first bloomed with war gardens. Alongside the National Mall, more than 100 acres of corn had been knee high by the Fourth of July in 1917; that fall, the city’s Boy Scouts harvested 8,000 bushels. The next year, the city grew an estimated $1.4 million worth of food (about $24 million in 2020 dollars); Denver’s crop topped $2.5 million (the equivalent of about $46 million today). There was a garden in every city backyard and in every vacant lot. There were even vegetables filling apartment window boxes.

“Everyone who creates or cultivates a garden helps,” President Woodrow Wilson declared in April 1917, who tasked government agencies with aiding the effort to conserve food and other supplies for the soldiers overseas. But most of the credit for the campaign went to Charles Lathrop Pack. A month earlier, in the aftermath of food shortages that had led to riots in New York, the timberman had launched the National War Garden Commission, a collection of wealthy and influential Progressive thinkers with a name that suggested official government sanction. (A sleight of hand that irked the Department of Agriculture.) Pack’s contribution to the war effort was a public-relations offensive. He believed that food production was essential to victory at home and abroad, but that “only persistent publicity, only continued preachment, could convince the public of that.” The omnipresent newspaper headlines, the iconic posters, the catchy slogans, even the eventual rebranding of the “war garden” as the more evocative “victory garden”—that was all Pack. The National War Garden Commission planted crops in New York City’s Bryant Park—a site Pack described as “plaster and ash-filled ground only a few feet above the rumbling subway”—which begat a massive community plot on Boston Common, a farm beside San Francisco’s Civic Center, and, by Pack’s conservative estimates, more than 5.2 million other war gardens by 1918.

Secretary of Agriculture Claude Wickard had been 24 years old when the country entered the First World War. He spent those years laboring on hundreds of acres of fertile Indiana farmland, growing corn, wheat, and oats and raising pigs. It was not the front lines, where so many of his contemporaries had been sent, but he had come to see his work as vital to the country’s defense. On this, he and Pack would have agreed. “Food will win the war and write the peace,” Wickard repeated often throughout 1941, preparing a new generation of farmers to meet the coming battle. “This is our war.” It was here that Pack, who died in 1937, and Wickard diverged. To Wickard, these trenches were no place for amateurs.

Novices, especially those in cities, Wickard feared, would plant in poor soil. They would try to cultivate crops ill-suited to their climate. They would fail to recognize cucumber beetles and tomato worms. They would start with enthusiasm and then abandon the project. And, worst of all, they would waste valuable resources: seeds and fertilizer the country’s farmers needed.

Instead, Wickard’s Victory Garden program was aimed at the farmers themselves. Their know-how and equipment would make short work of tending a few extra rows of beets, spinach, and peas, planted alongside the commodity crops in their fields. Those vegetables would feed the farmers’ families while saving valuable canning tin and transportation fuel. Wickard wanted to see 1.3 million new farmer-grown victory gardens in 1942. Those who “gardened for pleasure,” as one advertisement put it, should limit themselves to flowers, shrubs and trees. “This, of course, is for Morale,” it explained. “Because Morale is equally important as Nutrition.”

And so when New York mayor Fiorello LaGuardia asked Wickard in February 1942 if the Department of Agriculture would create a Victory Garden program for large cities, Wickard said no. “While it is recognized that there is a large and sincere interest on the part of many people in cities in growing vegetables to increase home food supplies, it is the Department’s opinion that if possible, we should avoid some of the mistakes of the war garden campaign of World War #1, and not give much encouragement to growing vegetables in the cities.”

From the start, Wickard had recognized what he described as the “psychological value of having things for people to do in wartime,” but he had greatly underestimated the size and sincerity of the interest. Nearly half of United States residents were old enough to remember the pride of tending a war garden. One in five had been children in 1918. Gardening as good citizenship had been instilled in them in school. The U.S. government had not led the first war garden campaign, and the country’s green thumbs did not need it to lead the second. In San Francisco, the Examiner printed a weekly column promising victory garden suggestions. In Boston, Jamaica Plain High School students won a competition with their backyard victory garden. And In Chicago, Mayor Edward J. Kelly launched a campaign to enroll 25,000 residents in the city’s own victory garden program. Nationwide, seed sales increased 300 percent in 1942.

By 1943, Wickard was ready to embrace the citizen-gardener movement he had tried to discourage. The demands of the war were greater than anticipated, and the country’s farming capacity had been curtailed by the incarceration of 120,000 Japanese-Americans, a large number of whom worked in agriculture. The first ration books issued by the United States—for sugar—had appeared in May 1942; canned goods were to be added to the list of restricted goods at the start of the 1943 planting season. Wickard now took “personal charge of a campaign to persuade town, city and suburban families to make use of every ‘plot of open, sunny and fertile ground,’” the United Press Association reported. “Victory gardens offer those on the home front a chance to get in the battle of food,” he said. Wickard announced a goal of 18 million victory gardens that year—12 million of those in parks, vacant lots, and city backyards.

As for the White House lawn, “It will grow nothing but grass,” the First Lady had reported regretfully at an April 1942 press conference. Experts from the Department of Agriculture—who worked, of course, for the man who had then wanted to discourage amateur food production—determined there was no suitable location on the property for Eleanor Roosevelt’s vegetables. But in the spring of 1943, when 20 million victory gardens were sown across the country, a small plot was planted at 1600 Pennsylvania Avenue. Tended by the young daughter of a presidential advisor, beans, carrots, tomatoes, and cabbages flourished where flowers once grew.

Invented during World War II, it's now on some trendy menus.
food

For every crisis, a recipe.
museums

Once gardens, then a garbage dump, then back to gardens.
Video • PinDrop