How 'All the President's Men' Defined the Look of Journalism on Screen - Atlas Obscura
Want to see fewer ads? Become a Member. 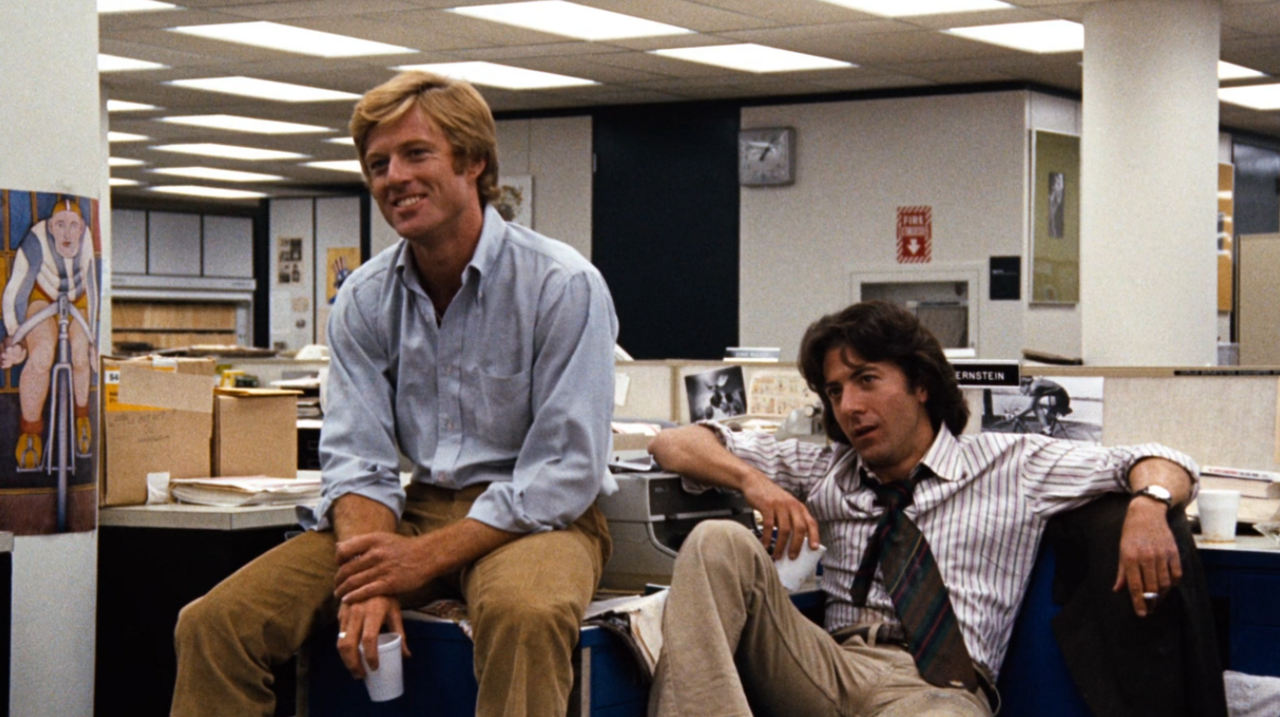 Robert Redford and Dustin Hoffman in "All The President's Men". All Photos: Courtesy Warner Bros

We live in weird times, when the press ranks almost as low as Putin in national polls yet reporters in TV and movies can still be heroes. The 2015 film Spotlight, which dramatized the work of The Boston Globe reporters who exposed habitual child sex abuse within the Catholic church, reaped box office and critical success and took home Academy Awards for Best Picture and Best Original Screenplay. This month, moviegoers can see director Oliver Stone’s Snowden, starring Joseph Gordon Levitt as whistleblower Edward Snowden and Zachary Quinto as reporter Glenn Greenwald. And the Panama Papers—the inflammatory leak of 11.5 million documents detailing the offshore dealings of wealthy individuals and public officials worldwide—have inspired two impending films, including a Steven Soderbergh project based on a book by journalist Jake Bernstein and a Netflix feature created in collaboration with journalists Frederik Obermaier and Bastian Obermayer.

Given the roiling political climate—where Facebook hoaxes and insane conspiracy theories are the norm—it’s perhaps not surprising that we fantasize about crusading journalists. So for this installment of In the Background we thought we’d turn our attention to one of the most iconic cinematic portrayals of journalism, All the President’s Men, which turns 40 this year.

Released in 1976 and directed by Alan J. Pakula (Klute, Sophie’s Choice) the film casts Robert Redford as Bob Woodward and Dustin Hoffman as Carl Bernstein, Washington Post reporters who investigated the Watergate scandal. The pair’s reporting on a break-in at the Democratic National Committee headquarters at the Watergate office complex in Washington, D.C. uncovered abuses of power by the Nixon administration and were instrumental in fueling President Richard Nixon’s subsequent impeachment hearings and eventual resignation in 1974. The film was celebrated (although The Washington Post found it a little boring), won eight Academy Awards and has gone down in film history as a classic journalism thriller.

Much ado was made of Spotlight’s attention to detail, right down to the “artless look” of journalistic attire, and it owes more than a little to the obsessive recreation that informed All the President’s Men. Perhaps inspired by their subject, Hollywood fetishes the accuracy of their world-making when it comes to journalism, even as they fictionalize it.

The film is set (naturally) mostly in Washington D.C. and the offices of The Washington Post. And make no mistake—Washington D.C. is a shady place. Literally. The city and its landmarks are a foreboding chiaroscuro of darkness. There are barely lit parking structures, inky car rides, gloomy apartments and homes. Even the offices of the Library of Congress are shot as if in a cave. (Please, somebody buy these librarians a lightbulb!) Conversely, The Washington Post offices are a glowing halo of truth-telling. They are glaringly lit; blazingly bright in comparison to almost every other scene.

Someone please get the Library of Congress some lightbulbs.

The office is as much a star of the film as Redford and Hoffman who are elbow to elbow with landslides of paper, stacks of well-thumbed reference books, clusters of coffee cups and overburdened ashtrays. Some of this can surely be chalked up to artistic license, but the newsroom was a careful recreation that included actual garbage transported from the Post offices.

Not winning any clean desk awards.

Art director George Jenkins obsessively reproduced the Post office’s at Warner Bro’s Studio in Burbank. According to a 1975 Post story about the making of the film (and invasion of the office by Hollywood types) the newsroom was recreated for $200,000 and spread out over two sound stages. “Nearly 200 desks at $500 apiece were purchased from the same firm that sold desks to The Post four years ago,” the story continued. “And to color them just right, the same precise shades of paint—be they ‘6 ½ PA Blue’ or ‘22 PE Green’—are being mixed on special order.”

Jenkins even obtained a brick from the building’s lobby so he could have it copied in fiberglass. And, in what the Post termed “The Great Hollywood Trash Lift,” Jenkins asked reporters to toss their unwanted ephemera into boxes, which he had transported to the set and strewn across desks. According to the Post, reporters helpfully supplied the filmmakers with a risqué Christmas card, a newsletter from the Little Richard Fan Club, a chart on animal parasites, and enough other goodies to fill 75 boxes.

One writer reportedly left a note on a coworker’s desk warning them not to chuck old love letters in the box, lest they be projected on a screen in front of a new paramour a year later.

The paper strewn office, populated with actual documents from The Washington Post.

The idea of a love letter written on paper is quaint today, and the chaotic desks are a startling contrast to today’s offices, where paper and pencils are relics and workspaces often consist of a computer, a monitor, and not much else. The background is often in frenetic movement as bodies rush back and forth, as if the reporters work in a bustling gym.

Also in complete chaos? The wardrobes of Woodward/Redford and Bernstein/Hoffman and their compatriots (who are almost exclusively male). Rolled up sleeves and enormous, disarrayed collars are ubiquitous. Very few ties in this film are knotted with any authority. Jason Pollack, the film’s costume designer, ended up making a career around masculine style. He was a struggling actor who fibbed his way into costume design, and went on to become Robert Redford’s regular costume designer. He also dressed Hoffman frequently, as well as stars like Harrison Ford, Sylvester Stallone and Tom Cruise. (Pollack was especially praised by The New York Times style section for swaddling Ford in a pair for flattering Wranglers in the film Extraordinary Measures.)

No time to tie a tie.

Pollack is sanguine about his role of picking out duds for leading men. “If I do my job well, then nobody notices the wardrobe,” he told the Los Angeles Times in 2008. “It just assists in telling the story and creating realistic characters.”

The rumpled-ness of reporters is something Hollywood still holds dear. When asked to describe the style of journalists, Spotlight’s costume designer told The New York Times that “it’s an unthought-about uniform.” The irony, of course, is that every detail has been lovingly constructed by Hollywood. When the central action of a film revolves around a paper chase instead of a car chase, those details have to be just right.

A Fly With a Forked Penis Was Accidentally Found in Australia

It has been described as "double-barreled."
in the backgroundpop culturefilm locationscolumnsfilmpolitics

How the ‘Fast and Furious’ Set Designers Made SoCal the Focus

The humans were dressed to be cars, basically.
film locations

California's Alabama Hills have stood in for multiple states and countries, not to mention distant planets, alternate dimensions, and fantasy realms.
film locations

The huts of Ahch-To exist here on Earth.
film locations

Staten Island, Wall Street and the story behind Joan Cusack's hair.
Read more
Thanks for sharing!