How an Antiquarian Horologist Brings Tiny Machines Back to Life - Atlas Obscura
Want to see fewer ads? Become a Member. 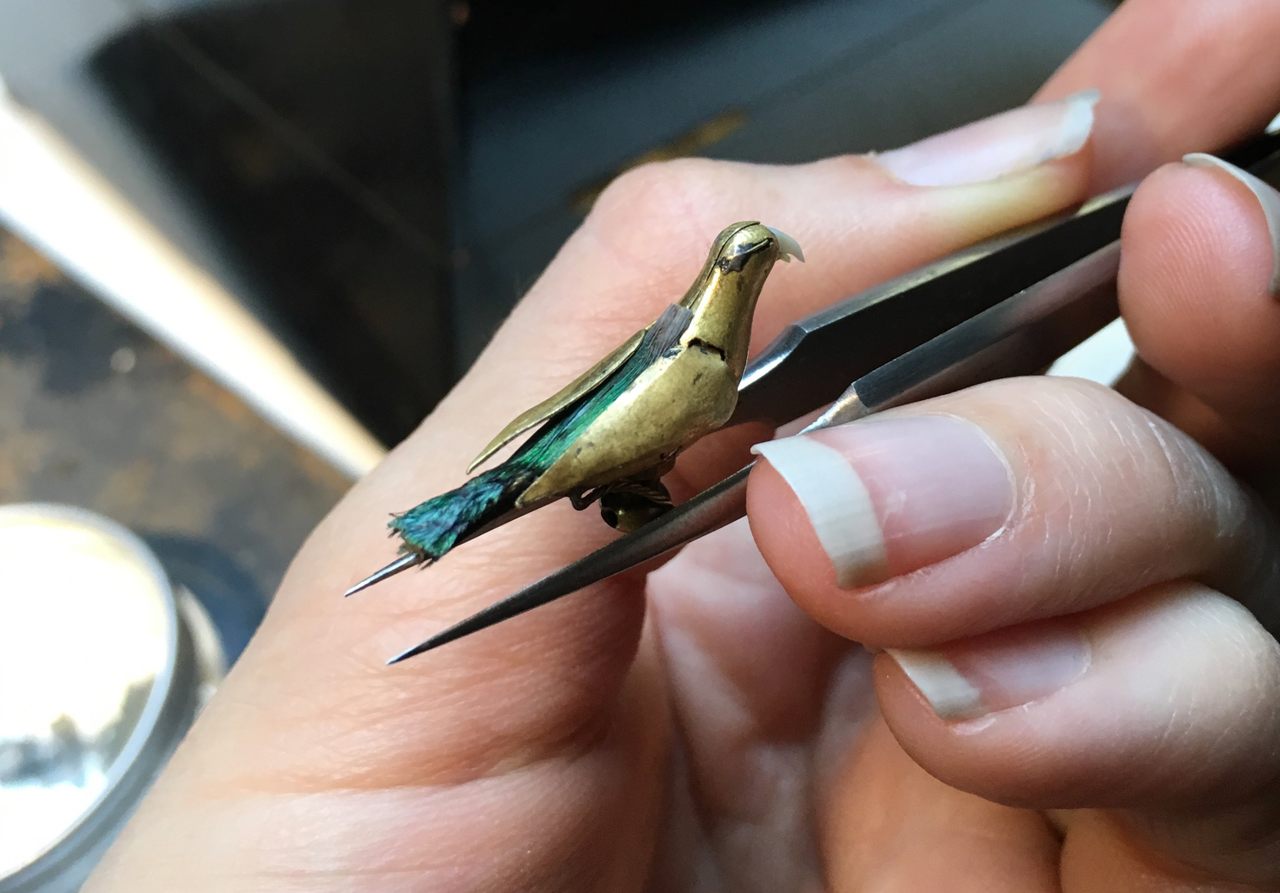 One look at a centuries-old mechanical silver swan, and Nico Cox was set on her path toward a career in tinkering with antique cogs and fixing chirping metal birds.

Cox grew up collecting clocks and watches as a kid; had she known she could grow up not only to help mend the Silver Swan, but to become a full-time antiquarian horologist, she would have started pursuing the career a lot earlier.

A pristine automaton now nearly 250 years old, the life-size Silver Swan now resides at a museum in northern England. Believed to have been built by inventor and mechanical polymath John Joseph Merlin, it has over 113 articulated silver rings in its neck, all detailed to look like feathers, above an array of silver that simulates the movement of water with tiny swimming fish. “In a way, it’s very vulnerable like a real swan—as a mechanical object, there’s nothing else like it,” says Cox.

Cox gained her skill set in the south of England at West Dean College, a horological conservation school, where she learned the ins and outs of 18th-century clockmaking seven days a week, from morning until late evening. (There is nowhere in the United States that offers any type of conservation horological training, she says.)

Making a clock from scratch is very, very difficult, requiring extensive training and mastery of many different elements, says Cox. Conservators are constantly borrowing from all different fields in science and technology to identify new forms of technology as well as use and reuse of materials, from Pyrex to fish bladders.

Cox, originally trained as a jeweler, studied the philosophy of metaphysics in college. It was then that she learned about art and technology of the Renaissance period, such as beautifully detailed automatons—“kind of the first artificial intelligence,” she says. It was a hands-on approach to metaphysical problems.

Part of the magic of automatons is the mechanical optical illusion—a ship moving in waves, a deer drinking water—all created through a network of tiny inner gears and disks. Recently, Cox has noticed a renewed interest in this historical, analog form of magic—and in particular, its tangibility. “People are needing a more grounded association with what they can see and feel,” she says. “They are craving that experience of holding something, looking at something.”

People come to share a feeling of stewardship, she says—a need to be part of the preservation of cultural heritage. “I definitely think that when people come to my studio, they’re encountering a space they don’t think exists anymore—it’s a reminder that this is still here, and this is still relevant.”

Cox often introduces guilloché, also known as ornamental turning or engine turning, which is the mechanical engraving of metal that uses different gearing systems to generate complex drawings. (She even created a coloring book of designs created by guilloché.)

We asked Cox to describe some of her favorite pieces she’s worked on. Here’s what she showed us.

“Say I’m working on a chronometer pocket watch—that’s much more straight-forward than a pagoda clock.” In the case of the pagoda clock, recently documented to be from 1770, Cox was dealing with over 600 pieces—and that was just the outer case. Each of these pieces was photographed, measured, and documented, then entered into a spreadsheet, meticulously cleaned, wrapped, and stored away until everything could be put back together and the object’s movement restored.

The pagoda clock, a project for the National Trust, had been taken from China and returned to England at some point in history. Cox explains that there was a lot of evidence that the clock had been altered from its original state to play music the Chinese emperor would have liked; larger springs had been put into the mechanism so that music would run much faster to give it a jauntier rhythm and tempo.

When the clock came back to England, a clockmaker weighted down the fly (another name for a governor, which is used to govern the speed of a mechanism), which created two opposing forces and caused the wearing down of everything in between. Such research and clues allow experts like Cox to figure out the timeline of events for historic objects—and decide how to maintain the objects’ identity and integrity.

One piece that Cox particularly enjoyed working on was a tiny mechanical ship. When she first received the ship as a project, the music box inside was so quiet you could barely hear it. Once she was able to resolve the issues causing the lack of sound, she discovered that the ship played a version of “God Save the King,” the former national anthem of the United Kingdom. Since this melody was ever so slightly changed when each new monarch came into power, Cox was able to trace the age of the ship back to 1810 through its music (and a trip to the British library). She learned, too, that it was a commemorative piece made for the Battle of Trafalgar.

The tiny ship pitches and rolls in the waves, sitting in the center of a ripply plane of isinglass in front of a cliff. (Isinglass, which is made from the swim bladder of a fish, is often used in confectionary, brewing, as an adhesive.) Cox made a case for the delicate piece out of sterling silver. “It’s the only one we’ve seen like it,” she says.

When you see a singing bird box, it simply looks like a tiny decoration—you’d never suspect that inside is a mechanism that allows the bird to pop out and actually sing a song to you.

Some of the earliest bird boxes go back to the late 1700s, though some very complex automata—mechanical ship galleons—go back to the late 1500s. Each tiny, individual feather (taken from hummingbirds) on the bird is trimmed, lacquered, and applied one by one to the body—for Cox, this constitutes an eight-hour job. Because there is still no convincing artificial substitute for bird feathers—and sometimes, the original materials are inaccessible (for example, ivory for a beak)—creativity and improvisation are constantly required.

The bellows are the lungs to the bird, supplying air to a slide whistle, articulated by levers that run along something called a “song cam”—which requires disks with very specific cutouts and profiles that dictate the pitch of the whistle and trill of the bird. The motion of the bird is mechanized to match its song to an exact degree—its body and head rotating left and right, its beak opening and closing, tail bobbing, wings flapping. Cox is currently writing a treatise on the bird’s bellows, the most complicated and intricate component of these boxes. While there exist two books dedicated to singing bird boxes, in general, the bellows themselves have not received much attention.

These bird boxes are Cox’s favorite small objects to work on. “They seem to delight people in a way that pretty much nothing else does,” she says. “Everyone loves the birds.”

Speaking of birds—that brings us back to the Silver Swan, the holy grail of automatons, and a bird that Cox has, since entering the world of antiquarian horology, touched with her very own fingers.

“It was just the most unbelievable thing—I actually got to go underneath it, laying on my back, seeing these little fish and glass rods,” says Cox, describing when she and her college tutor uncased the Silver Swan to check on the fish within the pool of glass water. “I know that doesn’t sounds like a huge job, but for me, having the privilege of being able to touch that, knowing that my hands were on that particular piece—that is something I will never forget,” she says. “It was the most meaningful moment in my whole horological career.”

Brittany Nicole Cox currently works as a horological conservator in Seattle, Washington. In addition to her private conservation studio, she has a workshop in South Seattle where she teaches classes and does new-making. On February 19, Cox is offering an Atlas Obscura workshop to demonstrate the technology and technique (see more: Mechanical Magic: Intro to Engine Turning), and this June, she’s hosting an event demonstrating how to create cardboard automata (see more: Cardboard Automata: Toy-Making Workshop).

Found: A 17th-Century Wreck That Looks Like Sweden’s Most Famous Warship

Join us for a daily celebration of the world’s most wondrous, unexpected, even strange places.
automata

A sculptor hitched the cackling bird to a trailer and is taking it on the road.
automata

All you need is a good imagination. And a whole lot of patience.
mummies

Overheard at Atlas Obscura in 2018

From bioluminescent fungus to random bone houses, here's what we talk about at the office.
Video • Wonder From Home