When the Sun Is High, Dung Beetles Navigate With the Wind - Atlas Obscura
Want to see fewer ads? Become a Member. 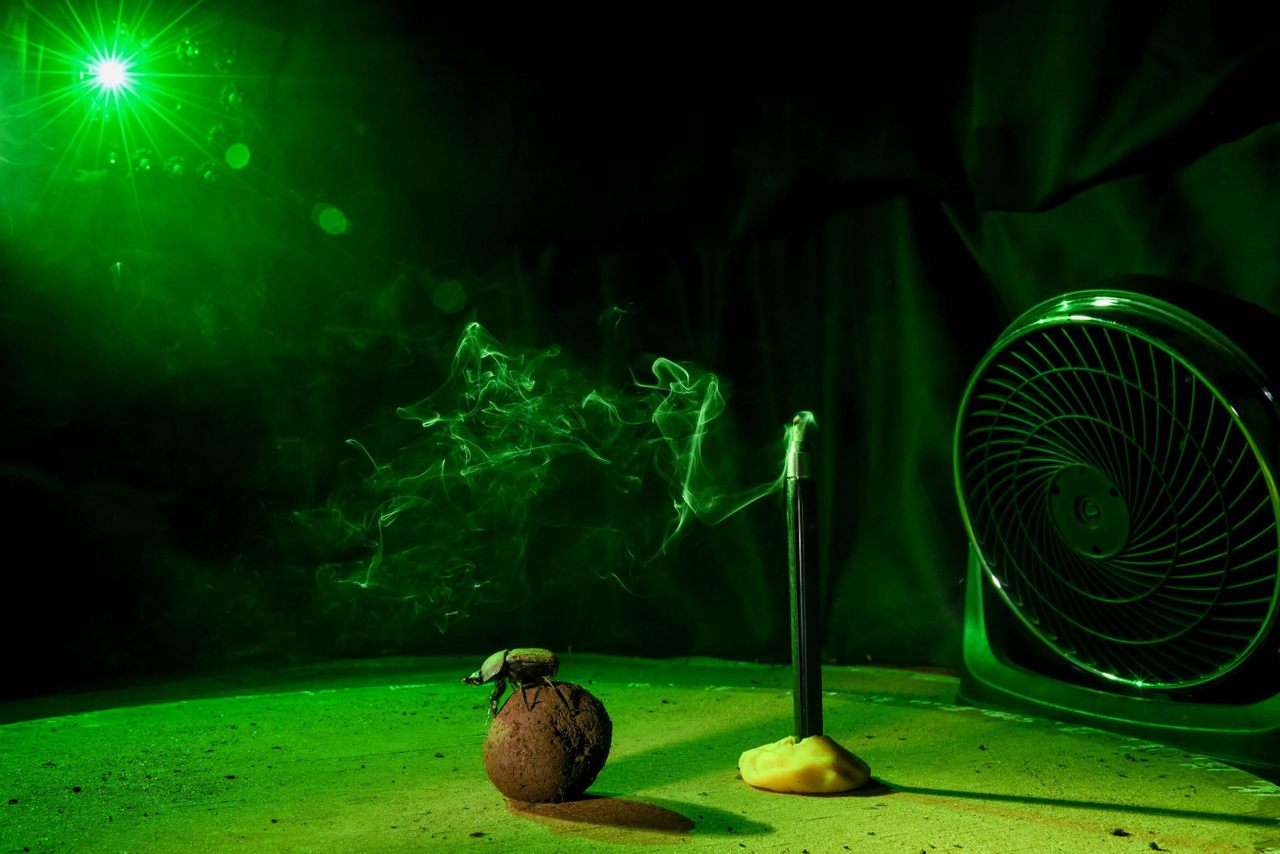 Researchers testing for wind in the lab. Courtesy Chris Collingridge

Traditionally, dung beetles—insects from the family Scarabaeoidea—rely on the sun to guide them through the savannas of Africa, at least the ones that roll their prized dung into tidy balls. But when the sun is too high or clouds fill the sky, the beetles have to adjust to a different type of navigation. Based on recent research, they turn to the wind for guidance.

A team of biologists from Sweden and South Africa studied the precision with which these particular dung beetles move by tracking their movements in the wild when the sun was at different points in the sky. In the middle of the afternoon, when the sun reaches its highest point above the horizon, the beetles toggled on their inner wind compasses (thanks to sensors on their antennae that detect the breeze). Then, as the sun began to set, the beetles moved according to the sun once again.

“This is the first study that shows how an animal’s biological compass can integrate different directional sensors, in this case wind and sun, in a flexible way,” lead author Marie Dacke, who studies sensory biology at Lund University, said in a release. This enables the highest possible precision at all times.” The fact that these dung beetles can oscillate between two different methods of navigation indicates that they have more advanced brains than previously thought. The study was published in the Proceedings of the National Academy of Sciences.

“The insect brain is definitely not pre-programmed to always follow the same set of actions. On the contrary, we can show that such small brains work according to very dynamic principles that adapt to the conditions prevailing at a given moment,” Dacke said. The international research team studied the beetles in their native habitat and in a controlled laboratory environment. Outside, they manipulated the sun’s elevation with mirrors, and indoors, they simulated wind direction with fans.

When the researchers shifted the sun 180 degrees, the beetles turned around completely—and the same dramatic effect occurred with changes in wind direction. Essentially, the dung beetles have developed a redundant navigation system, adaptable to almost any daytime conditions. (And it’s been shown that some dung beetles can navigate by the moon or the Milky Way, which is just wow.)

Moving forward, Dacke and her team plan to investigate whether dung beetles register wind the same way at night, and how they do under those circumstances when there’s neither wind nor sunlight.

A gift guide from the Atlas Obscura team.
insects

In Addo Elephant National Park, the smallest residents may be the biggest draw.
insects

The Thirsty Beetles That Capture the Fog

In the Namib Desert, slaking thirst is a slow process.
spiders

The Best Bugs to Befriend in the New Year

Get to know some cuddly roaches and dramatic beetles.
Video • AO Docs